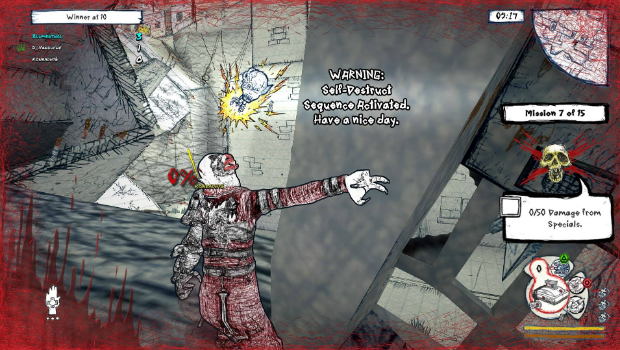 Doodling obscene and bodacious ephemera into a notebook is easily the most satisfying memory of my high school days, and I could not possibly be less unique in that. So many students trapped in a boring deluge of lecturing find solace in a few drawings they know and love. Most people end up drawing that pointy S or band logos (I drew an aristocratic toaster and sock puppet myself) but a few really talented artists bring worlds to life within the pages of their notes.

Drawn to Death celebrates those magnificent and forgotten artists, bringing their vomitous, blood-splashed and sexy rock and roll creations to life in deathmatches filled with taunts, farts, and curse words. Like a totally sweet hooker with a pile of drugs, Drawn to Death is fast and easy, but slips into monotony and confusion all too fast.

Drawn to Death is a simple deathmatch game with third person perspective. Everything, from the characters and their weapons to the environments in which they deliver carnage, is done in a hand-drawn style on “lined notebook paper.” The look of this is pure kitsch in the darkest, silliest sense. Over-the-top explosions, creatures, and weapons give Drawn to Death a very juvenile feel in the best way possible.

The game captures this perfectly, in my opinion. The drawings are of huge breasts, over-the-top flying V guitars, punk rockers with porcupine like spikes, cyborg vampires, and 16-bit gaming machines rebuilt into rocket-propelled grenade launchers. The style feels familiar and classic but doesn’t slip into a predictable side that would have been easy to get lost in. The opening cutscene even starts with you in a high school “classroom” listening a CPR presentation, the game proper beginning when you look down at your notebook. It just works.

However, the look and feel is betrayed by a confusing experience while playing. Everything in the game is done in the notebook style, so there is a ton of white space, and it is very easy to get confused on the layout of the arena you are in. The style also just doesn’t look as good when it is so spread out. I can’t imagine the game having any other style applied here, so honestly this is a “take the good with the bad” situation.

The deathmatches are fast-paced, demanding that you keep moving at all times to avoid death. You choose a loadout of two weapons and a grenade to start with, and three more weapons to be spread out on the map. There are a handful of characters you can play as, and playing as a specific character levels them up, incentivizing you to stick with one. The primary game style is the all-out kill match, but there are other match styles available, such as a capture the flag style game played with still-beating hearts.

The game allows you to taunt other players using .gif style memes. These taunts can be unlocked along with costumes, guns, or other extras using these special boxes, which of course you can purchase with cash. As you progress, you’ll have many items available to customize your character to your liking.

The presentation is pretty amusing, with over-the-top music and the signature art style employed throughout. A fancy frog insults you and curses you out while leading you through every single aspect of the game. I love this frog, but I did not like how every single tutorial is forced, long, and overstuffed with jokes. The game also makes you hold down the X button to proceed through these tutorial menus, which is a small thing that extends the tutorial even more and becomes annoying quick.

Drawn to Death is a bloody, messy, childish romp through adolescent notebook art, putting you into the art itself in a series of deathmatches. The art style is endearing and interesting, but it leads to some confusion in the gameplay itself. Fast-paced, unique, and creative, Drawn to Death provides a gnarly experience unlike any other, but suffers from a bit of monotony all too quickly, mimicking high school quite well.

Patrick Rost has been with Gaming Trend since 2013. At first focused on sports coverage, Patrick has gone on to cover a wide range of games and other products for the website. Outside of Gaming Trend, Patrick writes and records music, grinds perpetually in Elder Scrolls Online (PS4), and lives day to day with his two dogs, Bob and Stella.
Related Articles: Drawn to Death
Share
Tweet
Share
Submit