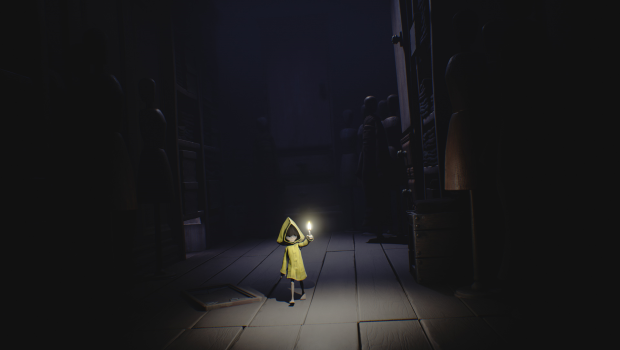 Some video games have worlds that perfectly capture a player’s imagination and become something bigger than the game itself. Places like Bioshock’s Rapture or Legend of Zelda’s Hyrule instantly grab on to a player and make them feel as if they have known the place for a very long time, like living in a home or apartment for years. Little Nightmares and the corridors of the Maw are a new, and much darker, addition to this list. As you take your first steps in this horrid yet fascinating place you know, without any explanation, you have to find a way escape and get away from it.

Tarsier Studios, who are known for their work on the LittleBigPlanet series, have left the cozy familiarity of that setting and headed straight for our nightmares in their new, and at times disturbing, puzzle platformer. You can clearly see some similarities to the works of Playdead studios, such as Limbo and Inside, but Little Nightmares sets itself apart from those titles in its grim art style, and very unique, ever-present boss figures.

Little Nightmares does an excellent job of making you feel like you are powerless and always in danger, as you try to guide the mysterious character, known only as Six, out of the depths of the horrible Maw, a place full of awful beings which want to eat you. The way the game keeps each area’s biggest threat in near constant view really makes you consider every move you make and keeps your heart racing throughout. While you might never find yourself to be truly scared of anything in Tarsier’s grim offering, its tense and nerve-racking gameplay is able to pull off the same physical distress you would expect from a horror game.  This is really impressive, because it is able to deliver a very refined kind of fear that, while unnerving, probably won’t be keeping you up at night.

With its beautiful Claymation-esque art style and grotesque character design, Little Nightmares looks like a game even Tim Burton would find hair-raising. The gorgeous detail, put into every aspect of the game’s world, is accentuated even more by the game’s twisted and monstrous enemy characters. It is like a beautiful field full of flowers, with dead animals strewn throughout it.

The puzzles in the Little Nightmares aren’t anything to write home about and are, quite frankly, very simple. More often than not, if I was struggling with a section it was because or I was overthinking the problem, rather than being confused by the puzzle’s content. In such an inventive and interesting game, I would have liked to have seen a little more thought put into its puzzle aspect, to create a bit more of a challenge for the player.

While the puzzles might not be as tough as they could have been, that doesn’t mean that the gameplay isn’t fun. The sections where you have to hide from your enemies and the others where you have to simply run for your life are where Little Nightmares shines. The feeling of powerlessness is one that the game is so good at providing. At its peak, these moments come together to deliver some excellent gameplay, which is both memorable and exciting. Running from a room full of gluttonous giants as they chased me down a hallway, in the hopes of consuming me, is a moment I won’t be forgetting any time soon.

The game’s main struggle is in its pacing and terrible load times. The game seems to be designed such that each level gets more interesting and enjoyable to play as you progress through the game, and while this adds up to one of my favorite all time endings in a video game to date, it really makes the first two levels feel inferior and underdeveloped. The first level, in particular, seems like it doesn’t belong with the rest of the game, as it is rather boring and altogether quite empty. While this is probably used as more of a tutorial stage of the game, it still feels like Tarsier could have done much more with the area’s prison theme.

In Little Nightmares you have to use a system of trial and error to try and find out how to progress in the game, as the game doesn’t give you any dialogue or instructions. This is common practice in many video games today, but becomes much more of a chore when it causes you to die repeatedly, at which time you will have to sit through Little Nightmares’ exceptionally long loading screens. This immensely impacts how enjoyable some of the game’s more challenging sections are, where you can find yourself waiting for the game to load almost as much as you do playing it. I found myself not being interested in exploring some sections, to look for things such as collectibles, because I simply didn’t want to risk dying and having to deal with the game’s long waiting periods. This is a huge misstep as you never want to discourage a player from trying to get more out of your game.

While Little Nightmares might not scare your pants off, it will definitely get your heart racing. The game’s mix of incredible art design and enjoyable gameplay create a memorable game that gets better with each level. While Little Nightmares' long load times will hopefully get patched out currently, they make exploring a lot less desirable. Puzzles in the game could be better, but its main gameplay elements come off very thrilling and fun.

Zach has been a gamer ever since he picked up a PS1 controller and played Asteroids for the first time. From FPS games to Point-and-click adventures, Zach knows no genre that he can't get into. When not playing games, he spends his time looking at the newest computer components on the market and dreaming of a day when he can buy them.
Related Articles: Little Nightmares
Share
Tweet
Share
Submit