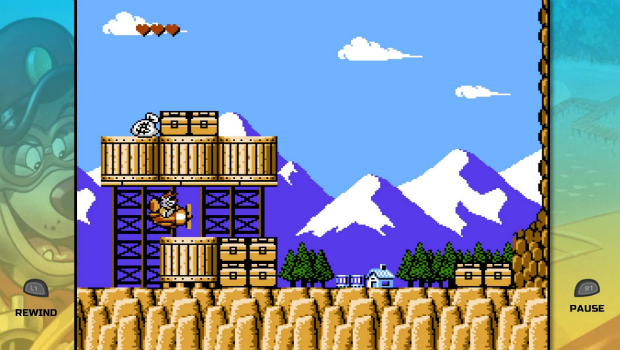 Most licensed games for the Nintendo Entertainment System were pretty lacking, but that was not the case for a series of releases based on the Disney television series Duck Tales, Tale Spin, Chip & Dale Rescue Rangers, and Darkwing Duck. The games based on these shows are some of the most accessible, fun, and well made games of the 8-bit era. However, coming late in the life of the NES, these games never sold in high number, leaving them all very rare, and thus very expensive for collectors.

The Disney Afternoon Collection combines six titles, Duck Tales 1 and 2, Chip & Dale Rescue Rangers 1 and 2, Darkwing Duck, and Tail Spin together into one game. These games are all brilliantly represented with crisp 8-bit graphics with bright, full color. Each game is its own treat of platforming (or with Tale Spin, shooter) nostalgia, but the collection also introduces a rewind function to the games that allows them to be played with a little more forgiveness.

Each of these six titles have their own flair and flavor, and unlike the recent Mega Man Legacy collection, this collection provides some variety between games. Duck Tales 1 and 2 are probably the most iconic and recognizable of games from this collection, with Scrooge McDuck pogo-sticking his cane through level after level of platforming madness. The Duck Tales games are the hardest to get used to, control wise, but also present the most varied difficulty of any games here.

Chip & Dale Rescue Rangers 1 and 2 are very similar, but not quite identical. Chip and/or Dale don’t have an attack, but use items (mostly boxes) in the environment to trigger switches and strike enemies. These games are the most balanced of all included, providing a nice challenge that doesn’t feel overpowering.

The last two titles, Darkwing Duck and Tail Spin, are both stand alone, and both have the most disparity in terms of quality. Darkwing Duck is a fantastic game in design, but has some of the most frustrating and hard to learn controls I’ve ever experienced, even considering this is originally an 8-bit era game. Tail Spin, on the other hand, was very easy to learn and master, but is a slow left-to-right shooter that only gets exciting on the final level.

Even with these complaints, all of these games have their own special charm and quality to them. These games run from just good to all-time great for the NES platform, and at the price point you’ll be hard pressed to find a more high quality repackaging of games.

The graphics are shinier and a little more colorful, but stay true to the original 8-bit limitations, and the game gives you the option to put artificial scan lines or other standard definition memories onto the screen, capturing the image of bad equipment perfectly on your 4K super television.

The most appreciated function across all games is a rewind option, that works as simply as it should and allows you to re-do certain sections of a game without having to go back to the start over and over again. This can make practicing boss battles that much easier and can get you acquainted with the game much quicker.

Each game comes in a full standard mode, and also provides a Time Attack and Boss Rush mode. Boss Rush allows you to fight the bosses from a game in succession, timing you to see how you fare against the world. Also included are the soundtracks for each game, and a collection of artwork and other images from the games.

The Disney Afternoon Collection combines several of the great NES games into a single collection, featuring Duck Tales, Chip & Dale, Darkwing Duck, and Tail Spin. All of these games have their own nostalgic charm, and are presented in this collection with style, a hugely functional and awesome rewind button, and enough good extras to make any Disney TV fan go wild.

Patrick Rost has been with Gaming Trend since 2013. At first focused on sports coverage, Patrick has gone on to cover a wide range of games and other products for the website. Outside of Gaming Trend, Patrick writes and records music, grinds perpetually in Elder Scrolls Online (PS4), and lives day to day with his two dogs, Bob and Stella.
Related Articles: The Disney Afternoon Collection
Share
Tweet
Share
Submit