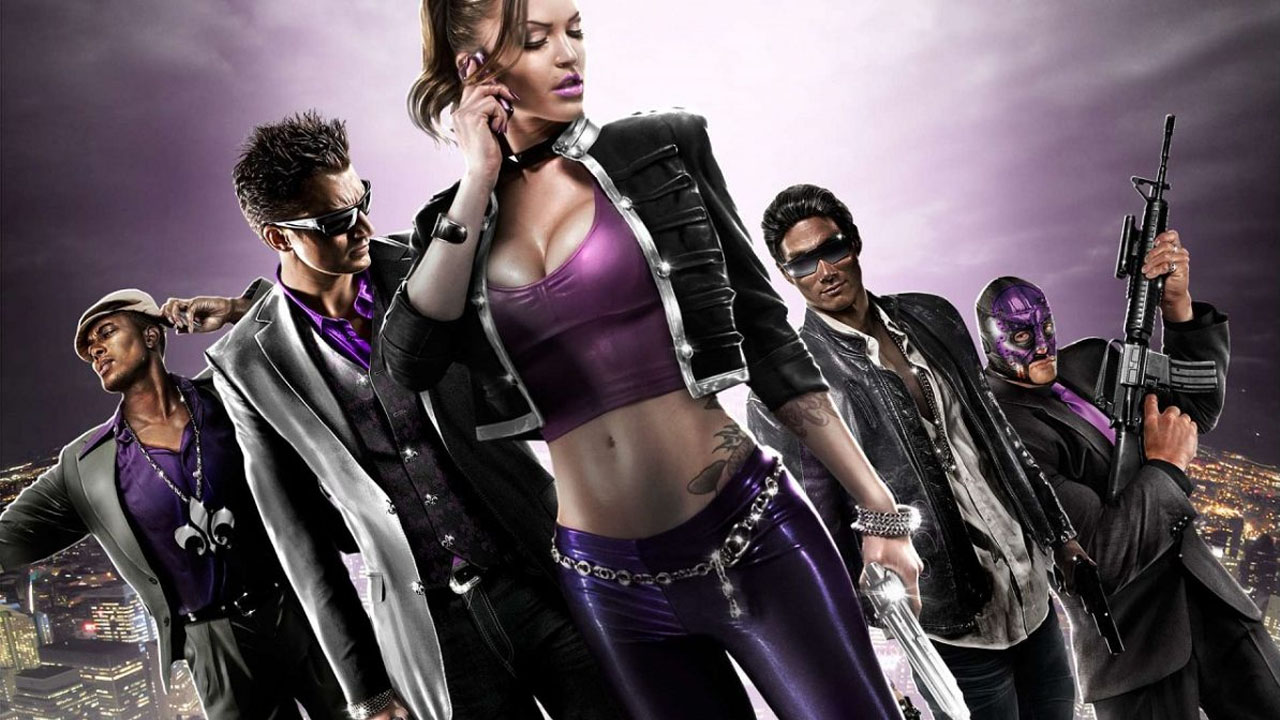 The Third Street Saints have absolutely gone off the rails tangling with a troubled Presidency, superpowers, virtual reality, the destruction of the Earth, a trip to hell, and even Satan himself. It’s been a crazy ride. Pushing the rewind on all that nonsense we get what has to be the ultimate version of the game rooted right here on planet Earth — Saints Row The Third. The Saints have sold out, shooting commercials and movies, selling energy drinks, and otherwise becoming corporate hacks. After a bank robbery goes sideways, they find themselves held hostage on a plane owned by Phillipe Loren, the head of an international criminal syndicate called, unimaginatively enough, “The Syndicate”. It turns out that it was their bank you and the gang just heisted, and they’d like their money back. Naturally, it all goes sideways. You end up leaping out of an exploding plane, and then back into the exploding plane, and then back out of the exploding plane. Because why? Because Saint’s Row, that’s why! If you are starting to remember why we loved this game so much when we reviewed it in 2011, you’ll be even more excited to see what’s in store in Saints Row The Third Remastered.

As Volition has confirmed they are working on another Saints Row game. The job of remastering this crazy adventure fell to Sperasoft Studio, co-developers of games like Mortal Kombat, Rainbow Six Siege, Assassin’s Creed Odyssey and Origins, The Outer Worlds, and many more. Instead of just polishing up the graphics and calling it good, the team decided to really dig into the guts of the game to make it feel new. A fully rebuilt lighting engine, brand new textures on about 4000 assets, every single piece of DLC, all the cosmetics, all three expansion packs, and giant wobbly high-definition dildo bats come together to create the best looking Saints Row game to date. Let’s get a look at the first few minutes of the game in its original form, as well as the new hotness:

Of note, this is being captured on the PC. So how many frames am I getting? All the frames. At what resolution? All the resolutions. (On Xbox One X and PS4 Pro you’ll find yourself enjoying the 4K upgrade, but you’ll be locked at 30fps.)

Without purposely chasing down the most explosive insane moments in the game to count the particle illuminated bits, it’s pretty easy to see that global illumination is the biggest improvement to Saints Row The Third. Sure, it’s not going to melt your video card, but it does make the world feel a lot more alive than it did previously. Similarly, fog and other diffusing effects make jet contrails, explosions, and smoke-filled confetti-clouded Genki challenges that much more chaotic. When the sun sets, things get even more interesting. Neon sends light scattering, reflecting off of the ground’s wet surfaces and nearby cars. Street lights cast a diffused light that makes for a more realistic look. It’s crazy to talk about realism in a game where you can drive a truck with a giant Johnny Gat head on the front, but here we are.

Most remastered games focus on upgraded textures for the player character and any characters one level removed. Here we see updates for civilians, cars, guns, buildings, tanks, jets, water, sidewalks, and everything in between. Draw distance has been pushed out, crowd density is higher,

It is impressive just how much love and attention has been paid to making this remaster the best it can possibly look. To help bring the gameplay up to the current standard, the team also saw fit to update the driving physics. Alongside new textures for the vehicles is a less floaty physics-based system that makes getting around Steelport a little easier. Sure, the physics are still bonkers at times, but at least you can stick to the road a little easier. Similarly, most of the animations have gotten an overhaul. There’s still a bit of clipping and Havok-based wiggling every once in a while, but overall it’s a welcome improvement.

Nobody looks at the Xbox 360/PS3 era and says “Wow, the AI was sure stellar back then” and that’s not gonna change now. There are still moments where your gang are complete idiots, or where bad guys will stand in a corner like they’ve been grounded. During some arena fights, foes couldn’t figure out the difficult concept of “stairs”. The AI was never the lure in Saints Row, and it doesn’t look like it’ll be the lure in this remaster either.

As far as extras go, Whored Mode (think Horde Mode from games like Gears of War) remains, as does multiplayer. That’s at least one in the plus column — most remasters just cut all online components to keep things simple. Here, you can jump online with friends and play a cooperative campaign or Whored mode. Check out Laura and I as we set out to cause a little mayhem.

Unfortunately, there are bugs in this Remastered edition, most notably in Whored mode as you can see in this short clip. Enemies are indicated, but nowhere to be found, leaving me with only one option – quit and lose progress. Genkibowl VII wasn’t a lot of fun to begin with, but when enemies stop appearing and you have to do it all over again, it’s worse. Thankfully these are very frequent, but that doesn’t make them any less frustrating.

That said, I hope they fix it up, because this is never getting old…

This Genki-sized update is more than just a polish job, it’s the whole enchilada. With visual upgrades and a dash of physics improvements, it’s sure to draw any Saints Row fan in all over again. Now we’ve just gotta get rid of the Genki-sized bugs.

Ron Burke is the Editor in Chief for Gaming Trend. Currently living in Fort Worth, Texas, Ron is an old-school gamer who enjoys CRPGs, action/adventure, platformers, music games, and has recently gotten into tabletop gaming. Ron is also a fourth degree black belt, with a Master's rank in Matsumura Seito Shōrin-ryū, Moo Duk Kwan Tang Soo Do, Universal Tang Soo Do Alliance, and International Tang Soo Do Federation. He also holds ranks in several other styles in his search to be a well-rounded fighter. Ron has been married to Gaming Trend Editor, Laura Burke, for 21 years. They have three dogs - Pazuzu (Irish Terrier), Atë, and Calliope (both Australian Kelpie/Pit Bull mixes).
Related Articles: Let's Play, Saints Row: The Third Remastered
Share
Tweet
Share
Submit