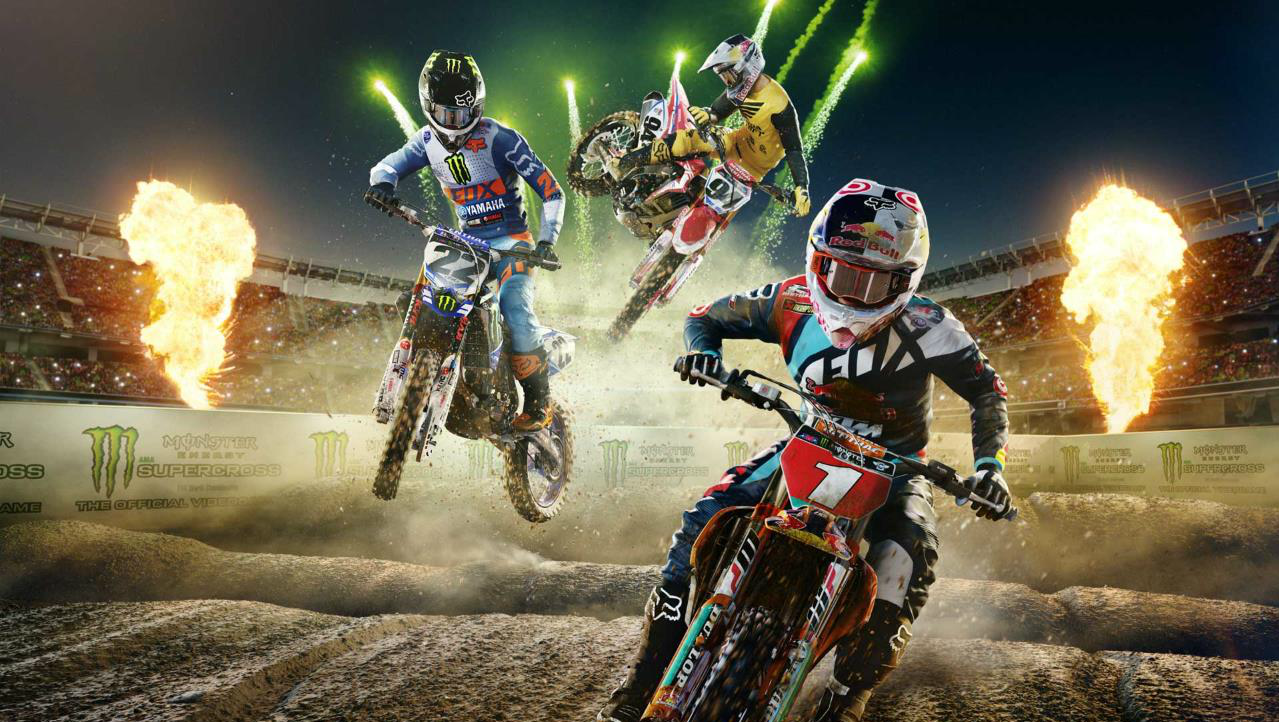 Monster Energy Supercross is a surprisingly deep and complete game that despite a wild amount of product placement (which may suggest sloppy, quick work) is a game to be respected and played. As I played, I grew to love the flow and feel of each race Unfortunately, this came after hours of frustrating failure and a hate gestating adjustment period.

Monster Energy Supercross: The Official Video Game has a fairly straightforward title that says it all. There are free exhibition style races, and you can also take part in championship series in three different circuits. Races can also be experienced online with other players. The game has a roster of real-life riders from across the world, and you can also create your own and start a career while full customizing the bike and gear you use.

The driving is much more complex than what you’d see in a larger, more all-encompassing title. Speed, momentum, and angle play a bigger role in your success than what I am used to with other racing games, and I like that. At first, it feels unwieldy and can really make you angry and feel like the game is broken. But after just a few races and some practice, you’ll find that it is a very fulfilling race experience once you pass that learning curve.

There are settings that can be used to either assist or make manual certain aspects of the game, so you can tune the difficulty to your own liking. I preferred to have real physics over the assisted style, but opted to go with a singular brake button, instead of using one for the front and one for the rear tire. This can allow you to craft the experience more towards your comfort level, or more towards a challenge.

The tracks are all in stadiums, raceways, or other large venues across the United States and Canada. They are all highly detailed and look beautiful in the backdrop of each race: The Daytona race shows a scantily attended but gloriously regal Daytona International Speedway surrounding the dirt course set up in the center. Other highly recognizable stadium sights such as the end zones in the University of Phoenix stadium are recreated for the game as well.

The most difficult aspect of the game to get used to is the weight distribution. It feels like you are dragging a small fishing sinker around a course on a string, and have to keep it centered on a playing card to avoid disaster. While not perfect, the weight distribution dynamic actually works great and makes each turn and curve more fulfilling to complete. When you fail, the inclusion of full animation wipe-outs, stopping just short of blood spray and twisted bones, makes failure darkly amusing at times.

The AI of the other drivers is decently balanced for skill and speed, and they tend to make mistakes that seem more natural. One of the things I have found annoying with racing games throughout history is that other racers seem to have all AI opponents be perfect course runners, and these other drivers are certainly not that. Packs disperse, riders fall, and the cream of the crop tends to rise in each race.

There are two large issues however with the game that sort of linger over the entire product. The smallest of those is a ongoing server issue where the game refuses to upload information after each race. The game seems to get this done despite the error messages, but the constant error messages are annoying on their own.

A much larger and seemingly permanent issue is archaically long load screens. The game is loading up a highly detailed stadium with multiple riders and bikes, but in addition each and every barrier in the game is its own item, which makes it moveable and interactable in the race. It also means each load is pulling hundreds of extra elements and slows the process down to the crawl. It is first generation PlayStation style loading speed at times and it can really kill the mood sometimes.

Monster Energy Supercross: The Official Video Game is a well crafted and unique racing title that attempts to capture the unique elements of dirt bike racing. The game is fun and has a lot of detail in its gameplay elements as well as the riders, bikes, and tracks included. Unfortunately, loading lag times and other issues stain what would be otherwise a very solid racing experience.

Patrick Rost has been with Gaming Trend since 2013. At first focused on sports coverage, Patrick has gone on to cover a wide range of games and other products for the website. Outside of Gaming Trend, Patrick writes and records music, grinds perpetually in Elder Scrolls Online (PS4), and lives day to day with his two dogs, Bob and Stella.
Related Articles: Monster Energy Supercross - The Official Video Game
Share
Tweet
Share
Submit