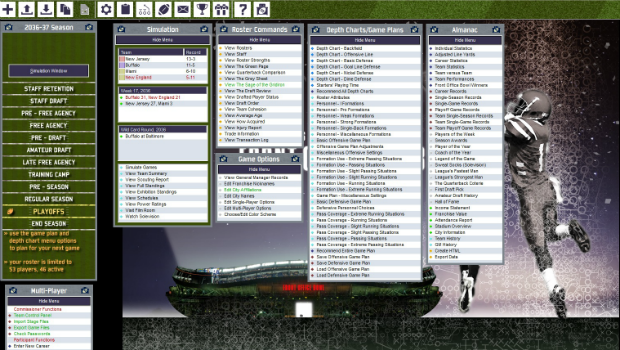 Most every football fan has at one time or another believed they could run a football franchise better than the mistake-repeating morons who currently make all the important decisions for their favorite team.  It’s hard not to look at some of the country’s teams (I’m looking at you, Cleveland, Oakland, and any other -land in the football world) and believe with just a few shrewd moves anyone could be the next big general manager to quickly climb the success ladder.  For those of you who have, like me, believed we were only one big chance away from that pinnacle of sports nerdery, I invite you to have your dream completely crushed by the marvelously crafted football simulator game Front Office Football 7.  The latest installment in the series by Solecismic Software, FOF7 combines a simplistic style with an insane attention to detail to craft a simulator on par with any other in the genre.

Like other sports simulation games, Front Office Football 7 puts you in the decision maker’s seat.  The task is to create the perfect football team, applying football knowledge and a wealth of dynamic information to the different processes of general sports management.  Rather than playing the games, you’ll be setting schedules, negotiating contracts, building and rebuilding coaching staffs and rosters, and designing gameplans, all in an attempt to prolong success or climb up from mediocrity.  Players can take a step back and simply craft and perfect rosters, or they can go as far as crafting individual weekly gameplans and picking plays within the simulations, allowing for play at the level you are comfortable with.

Before the game is started, players can optionally relocate and rename the fictional teams provided to reflect reality, or can design their own league with all new teams.  After a team is selected, you can choose to use player and coach files provided with the game for some familiar football related names, or they can choose to randomize completely.  Finally, the player is given the reins to their team in the first week of 2013’s Preseason.  There is no small form way to describe what you can do at this point: the team is at your disposal.  Do you not like that hot-shot quarterback in Denver?  Kick him to the Colorado curb and sign some scrub right there on the street right in front of him.  Nobody can stop you and nobody will try.  It’s up to you to make more good decisions (keep that hot-shot quarterback) than bad (trade all of your starting linebackers for that one running back with the cool name) before, during, and after the season.

A roster menu allows you to view and modify your roster with cuts, signings, and trades (up to the trading deadline at Week 8), as well as keep up with injuries and other important information.  After you’ve made the changes to the roster you see fit, you can use the lofty gameplanning menu to fine tune the plan of attack for the upcoming week.  The gameplanning menu is massive, allowing for the setting of individual depth charts for each formation, the crafting of a philosophy of when to use those formations, and the documenting of the overall plan you (or your CPU assistants) have crafted.  Lastly, an almanac catalogs items like statistics, awards, and measurements that aid in decision making.  After the season is over, the offseason begins where players can sign and re-sign free agents, take part in the amateur draft, and set the criteria for training camp.

However, none of that is special to the kind of game Front Office Football 7 is.  What sets FOF7 apart is its quirky, minimalist design counterbalancing with a borderline psychotic attention to detail.  The creator himself states that design elements like animations or music is too costly an expense for Front Office Football, and the end result is a 99% text based game with no music, no voice samples, no sound effects, and no animations.  The installation window is straight out of 1996, and the design in the game itself is not far ahead.  One of the game’s coolest functions is a box score (available for every game played every week) that opens as a HTML file in your browser, and the box score (and other HTML based functions) all look exactly like a proto-internet webpage.  While there isn’t much to look at, the design certainly isn’t a detriment to the game in anyway, and by forgoing any of those animations or sounds FOF7 avoids campy, horrible outcomes that have plagued other low budget simulation titles.  At its worst, the design is bland, but at its best it is a slice of delicious nostalgia for the pre-millennial crowd.

Along with the HTML box scores and game previews, Front Office Football 7 boasts a large number of unique options with names like “Solevision”, “The Quarterback Coterie”, “The Grey Sheet”, and more, each with different functions.  For example, Solevision allows you to review the last week’s simulations play by play as they would happen.  The Quarterback Coterie and the Grey Sheet are both reference materials for determining the best players.  The functions of these options themselves are varied and often have very useful applications, but it is the names that really adds to the “universe” of Front Office Football 7 and gives it a unique feel.

All of the money that was saved on design was put into a massive undertaking in making Front Office Football 7’s football universe match up with that of real-life football.  The attributes have been fine tuned to accurately rise based on a player’s experience, age, coaching, success, and the team and gameplan around him.  Surround a young quarterback with weapons and good coaching and watch him thrive, or go cheap and watch him wilt.  There are countless ways to guess as to how good a player can be on your team, but the deep amount of variables in the attributes make for no sure things.  Players even get to know each other and learn to hate or love one another inside the code of the game.  Other sports titles, simulation or otherwise, suffer from far too much predictability.  Front Office Football 7 offers no such solace.  While it can be frustrating (after 7 consecutive 2-14 seasons thank you very much), it is simple, subtle perfection to a sports number freak.  In the category of player chemistry, growth, and development, Front Office Football 7 is far and away the very best, simulation sports title or otherwise.  That’s a lot of hard work from the creators that pays off very well for the player.

While Front Office Football 7 is a fantastic game, it suffers in quite a few surprising categories.  It’s most glaring problem is the total lack of separate leagues.  While no official league is licensed within the game, the one available league does mirror the major football league in North America.  Why couldn’t then there be multiple fictional leagues that mirror the many football leagues from Canada, Germany, the UK, and other places around the world?  Other sports simulation titles are quick to boast their inclusion of even the most obscure league for their respective sport, but Front Office Football 7 completely neglects this important distinction that simulation games typically have to their sports action game counterparts.  Further miring FOF7 in an EA Sports-like funk is the lack of available years of play.  Like the leagues, players can only choose to start from the current year of the game, which is 2013 for FOF7.  One of the first ideas I had after I saw the design of the game and its HTML page box scores was to start a season in 1995 as a little “joke”, but I quickly learned that this was impossible.  There’s no need to make or buy a new version of this game every year, so it makes little sense to stick players in one particular year with zero other options.  The game also has a few minor problems, like complicated navigation and vague, confusing descriptions of player statistics and worth, but they don’t ever seem to take away from the experience.  Likely, many problems had early in the game will fade with experience.  A current Steam Greenlight campaign for the title may help to raise a customer base, and with more money made, the product can be given legs to develop even further.

Front Office Football 7 isn’t perfect, but when it succeeds it succeeds magnificently. The football simulator gives players the keys to the general manager's office and countless tools to make the right decisions. Yet ultimately, FOF7 leaves it up to the players to get it right and win. With a simple but admirable design, Front Office Football 7 sacrifices excess design for a deep and incredibly dynamic gameplay and player development system. A lack of league and time options hold Front Office Football 7 back from being one of the champions in the sports simulation division. While not the best, Front Office Football 7 is easily the most fun and interesting in the genre, and has the luxury of having the most popular sport as its subject matter. I highly suggest this game to any sports simulation fan as well as to the heavy crowd of sports stats geeks and analytic-heads that make up the great sports blogosphere who naively believe they know what is best for a football franchise.