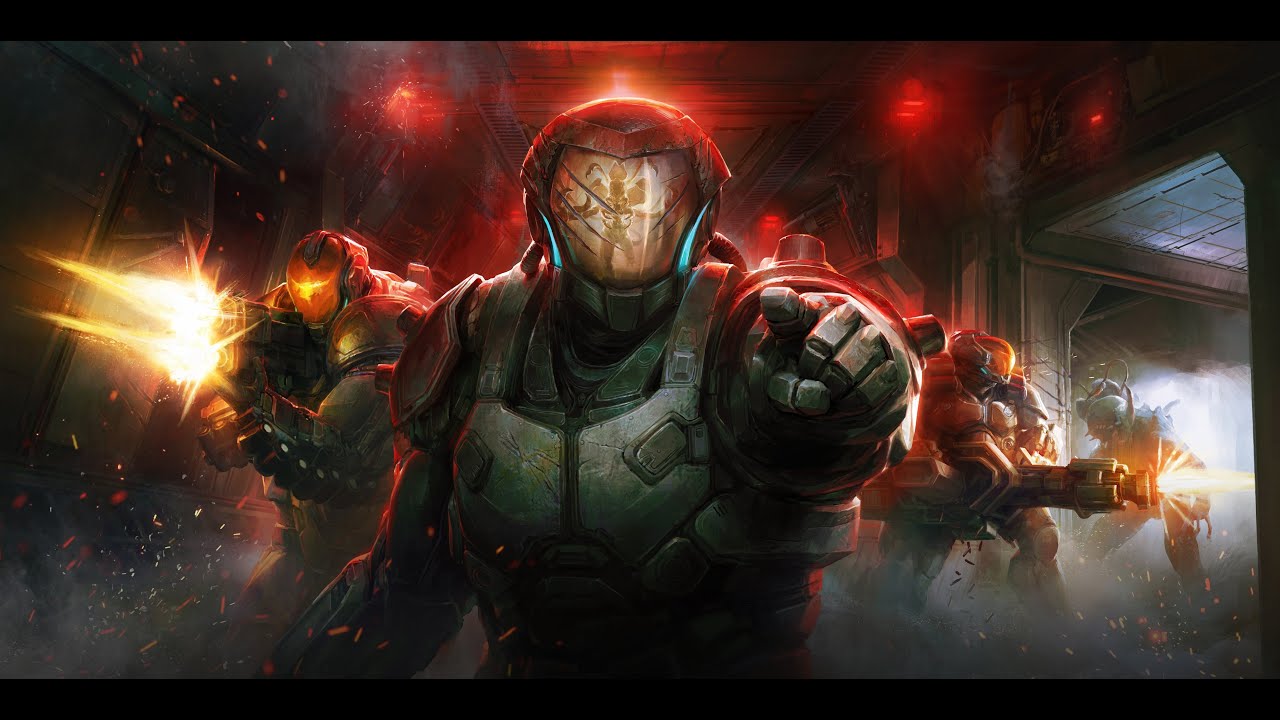 Tactical action, sci-fi setting, massive creatures, and 8-player cooperative chaos? Red Solstice 2: Survivors checks all the boxes for what should be a fantastic globe-trotting dystopian romp pitting a lone organization against an insurmountable threat. Borrowing from several genres, it also looks to blend turn-based tactical games with real-time strategy, throwing a dash of resource management into the soup for flavor. Time to don our monster-busting helmet and lace up boots — we have a few million mutants to slay.

Red Solstice 2: Survivors is set 117 years “After Earth”, and it turns out that we lost. The world is infested and on its last legs. Staring at annihilation, a secret taskforce called “The Cell” was formed, and you and your team have been awakened from stasis to fight the mutant hordes and hopefully stop their spread, saving mankind. In practice that means pouring a dump truck full of bullets at a never-ending hordes of progressively more ugly beasts until you stand atop the heap of dead, victorious. Do we need more story than that? Not really. Let’s sling lead.

Developer Ironward took a massive graphical step forward from the first game to this sequel. Lighting dances throughout the environment, casting realistic shadows on nearby walls — something I didn’t expect from an isometric tactical shooter. The texture work is top shelf, with each of the many, many monsters in the game being masterfully brought to life in their full disgusting glory. While you will encounter location repetition, there’s no doubt that each area is jam packed with detail in every direction. Graphically, this game is absolutely top shelf.

Another big change for this sequel is its approach to multiplayer. With support for up to 8 player cooperative action, your friends can drop into battle and provide a little cover fire and more intelligent power usage than the AI. It’s interesting as Ironward has taken a novel approach to bringing your friends aboard as it’s not tied to the host’s progress. Instead, the host’s weapon and equipment choices are limited by how far they are through the campaign, but joining players have everything unlocked. They are still bound by the combined power usage of their suit (more on that later), but it means that anyone joining your game will likely be able to dish out death more effectively than you can. Thankfully, the team still allows you to keep separate save files, so if you want to keep your single player run pristine, there’s an option. Still — it’s a novel approach of combining the two modes into one, without making joining players feel “down leveled”.

In a nod to games like XCOM, there is a world map complete with missions that pop up across the globe. You’ll gather resources, scout out new regions, build satellite outposts, and more as you research new tech and build fresh gear. You’ll hit familiar beats as you capture and autopsy creatures, unlock and build larger and more complex weapons, and improvements to your mobile base. It’s not new territory, though I have to say that XCOM did it better as most of what you’ll do on this map is shown via text boxes and bland menus instead of at least creating the illusion of building a mobile deployment platform or visiting a lab to perform research.
Boots on the ground, missions fall into roughly a half dozen types, with secondary objectives popping up in each one. These can range from rescuing and escorting a VIP or other marines, to eliminating a number of dangerous biomasses and activating in-region defenses. Throughout the map there are a number of crates marked with a RNG rarity rating so you can weigh the risk of recovering it versus the chances of being overwhelmed.

Your marines are split into archetypal classes, with powers and weapons to match. Medic, sniper, soldier, sapper — you know the drill. Each ranks up with experience, getting to choose from two or three new powers with easy rank. What’s odd is that, if you aren’t paying attention, you’ll find that your entire squad are “Force Generals” while you are a lowly 2 striper. Seems your promotions are based on arbitrary goals like shredding armor off of a target with an explosive. It’s a strange barrier, but thankfully your level and rank aren’t linked, with rank just unlocking various cosmetics you can apply. It’s not a complicated system, keeping the focus on the action rather than in the menus.

One differentiator between this game and other tactical titles is a horde wave counter. Before each mission you’ll see a graph that shows a progressive escalation based on the number of waves you encounter in the deployment. Exploring the map to collect each and every goodie will have you facing increasing numbers of progressively more dangerous creatures. There’s a risk/reward push and pull that will push you to occasionally make very tough calls on whether or not you bother with that objective across the map, or if you just cut your losses and bug out as the wave count reaches critical mass.

As the wave counter increases you see another highlight of Red Solstice 2 — enemies. There is an impressive variety of horrible mutants, each with their own characteristics. Worms are fast moving and poisonous, where the rank and file are slow shamblers who do physical damage. Some creatures have armor, where others can burrow under the ground to pop up where they will do the most damage. Increasingly larger creatures with commensurate amounts of armor and health begin appearing at higher levels, frequently requiring slightly different tactics beyond brute force to effectively dispatch.

The enemy variety throws another cool wrench into the mix. Each character, regardless of class, has a power suit that requires a number of slots and power to use various weapons. Yes, it’s possible to equip a medic with a minigun, but slinging “Old Painless” around means having less power to spend on health recovery and revive tools. As each enemy is different, you’ll want a wide variety of primary and secondary weapons to ensure you bring the right tools instead of always just picking the biggest stick.

I do have one major gripe with an element of the mission structure — blast doors. Throughout the various levels you’ll encounter blast doors, and sometimes your primary objective lies behind it. Despite showing that you can hack a door in the tutorial, I more frequently couldn’t find any way to open some of them. Instead, I killed wave after wave of foes while slowly chipping at these obscenely tough doors. It takes something meant to build tension and turns it into interminable tedium.

There are minor bugs present at launch that occasionally transcend into larger ones. Interactive elements occasionally refuse to cooperate, meaning you can’t proceed with the mission and have to quit. This triggers a failure for that mission, meaning the infestation level rises on top of everything else. I’ve also run into situations where my team has become stuck on terrain, or just randomly fired on explosive objects while standing in the blast zone.

The difficulty curve in this game is all over the place. Some missions you could literally just walk right through, not even bothering to gather resources. The next mission at the same skull level will be so overwhelming that you’ll be killed almost immediately. The odd thing is…none of it matters. If your whole team is wiped out, you get a “Game Over” screen, and then it pops you back to the world overview screen, tells you that you failed, and then you are back to work with your troops having taken an injury. By the time you take your next mission they’ll be healed back to full health. Sure the infection rate in that area has risen a little, but your death-not-death seems to have little effect.

Bafflingly, Red Solstice 2 is equally verbose as it is occasionally obtuse. Buried in mountains of text (where the story happens, for the most part) in your Codex you’ll likely find instructions on all of the various systems for the game, but the tutorial is lacking instructions on some of the mechanics. Guiding your troops to their destination and having them fight from there, or getting them to make a tactical retreat while firing can be a challenge without using the lightly-explained AI command system. Similarly, the game often tells me there are secondary objectives, but doesn’t give me enough information to actually care about them. This leans into the prevailing thought that this game was very much designed for multiplayer, as these things aren’t necessary with a human squad.

Finally we’ve come to the Achilles heel / strength of Red Solstice 2: Survivors — multiplayer. Put simply, your enjoyment of this title is directly proportional to how many friends you can get to play it with you. Single player feels like a painfully unbalanced experience, with frequent deaths and slow rewards. Multiplayer switches it up as you work with your friends to split objectives, rally around defense points, and all of the other things a human mind can bring to the table. It’s very clear that this game was meant to lean into that 8-player cooperative angle. If you are going to play this game, play it with friends.

With a focus on multiplayer, Red Solstice 2: Survivors tackles the action/tactical genre, offering up hordes of foes and beautiful presentations in the field. Where it lacks is connection with the player, bugs, and some difficulty spikes that make it infuriating.

Ron Burke is the Editor in Chief for Gaming Trend. Currently living in Fort Worth, Texas, Ron is an old-school gamer who enjoys CRPGs, action/adventure, platformers, music games, and has recently gotten into tabletop gaming. Ron is also a fourth degree black belt, with a Master's rank in Matsumura Seito Shōrin-ryū, Moo Duk Kwan Tang Soo Do, Universal Tang Soo Do Alliance, and International Tang Soo Do Federation. He also holds ranks in several other styles in his search to be a well-rounded fighter. Ron has been married to Gaming Trend Editor, Laura Burke, for 21 years. They have three dogs - Pazuzu (Irish Terrier), Atë, and Calliope (both Australian Kelpie/Pit Bull mixes).
Related Articles: Let's Play, Red Solstice 2: Survivors
Share
Tweet
Share
Submit