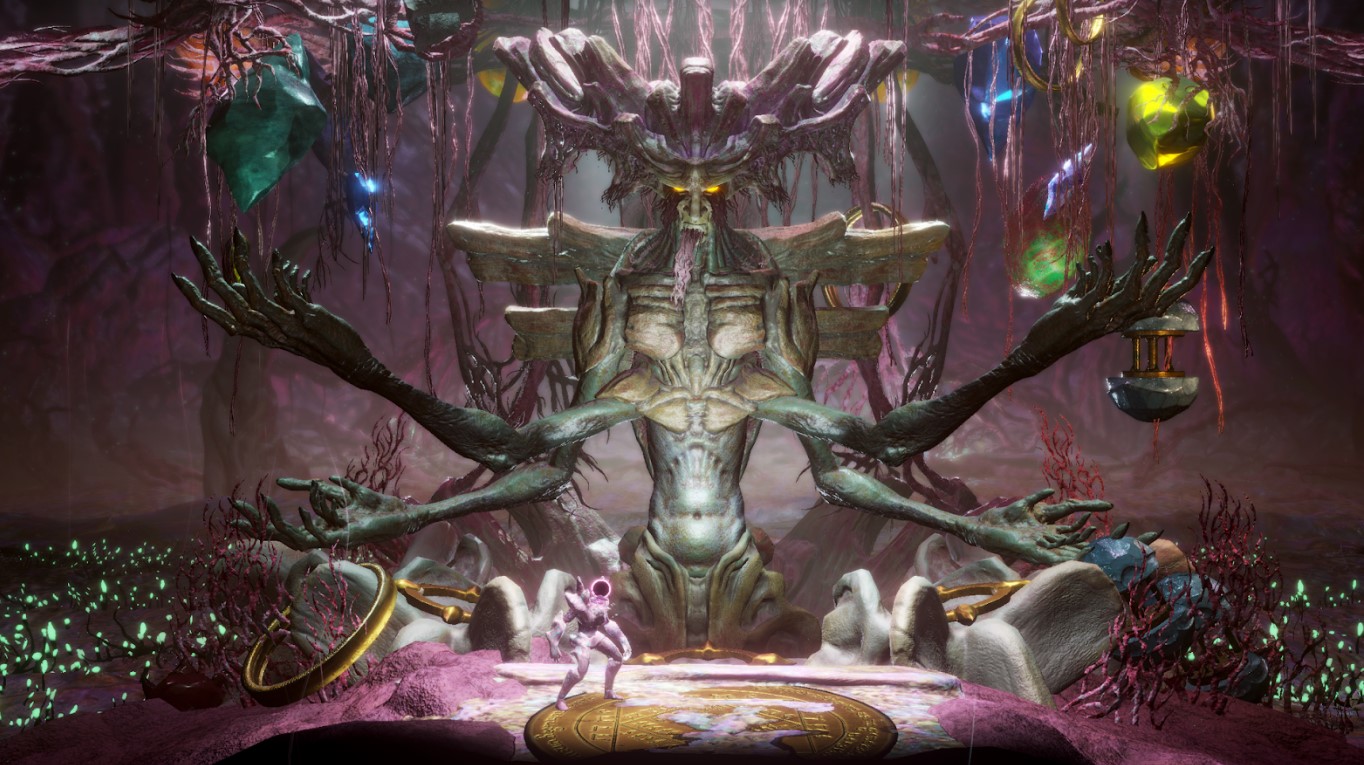 There are some extremely cool indies out there, and we’ve seen some truly unique looking ones over the last month and during E3. One of these intriguing experiences is GRIME, an odd platforming adventure from the minds of Clover Bite, the internal studio of Tiltan School of Design, based in Haifa, Israel. There’s something weird and delightful about it, and we’ll finally get to play it August 2nd. Since you probably are here trying to find out more about the game, check out the press release below!

LOS ANGELES, CA – June 28, 2021 – Clover Bite along with Akupara Games is excited to announce
that their highly-anticipated title GRIME will be coming to PC and Stadia on August 2, 2021, for $24.99
USD. In GRIME you control a nameless embodiment of destruction and hack and slash your way through
an aberrant landscape where rock-formed monsters rule. Armed with a variety of “living weapons” and a
black hole head, you consume the essence of the fallen to strengthen your vessel and unlock powerful
upgrades.

“The world of GRIME was one that I’ve always wanted to experience in my gaming. You’ll see
inspirations from my favorite games like Legacy of Kain and Salt & Sanctuary – almost like an
amalgamation of all my favorite gaming inspirations and memories packaged in a playable experience.”
Said Yarden Weissbrot, GRIME’s director. “We added our own unique and strange elements to the
universe by including weapons with distinct personalities, a broken, desolate-yet-living world, and an
unconventional parrying system where you literally use your head to absorb oncoming attacks or redirect
projectiles to name a few – it’s truly a visceral experience.”

● Eye-Popping Surrealism – Uncover mysterious secrets in weeping caves and face-covered
deserts. Meet otherworldly characters in distinct civilizations across an organic, interconnected
world – all rendered in unearthly 3D. Face foes born of the world itself, and swallow them whole.

● Death-Defying Combat – Punish enemies by parrying their attacks, smash them from the ground
or even airborne, and absorb them to grow your strength as you wage war on a living world.

● Living Weapons – Seamlessly swap weapons made of living creatures that mutate form during
combat, from clawing swords to centipede whips.

● Unique Skill Progression – Hunt down and absorb challenging monsters to improve your skills
and bring true customization to your playstyle.

● Challenge Astonishing Bosses – Defeat creatures dozens of times your size. Adapt to their
strategies, withstand their assault, and consume them to gain game-changing abilities that affect
both combat and traversal.

GRIME will ship with over 15 hours of gameplay content including hundreds of weapon and armor
combinations, an expansive bestiary plus many unique skills to unlock that add further variance to your
gameplay experience. Will you consume the landscape of its horrors or will you be consumed yourself?