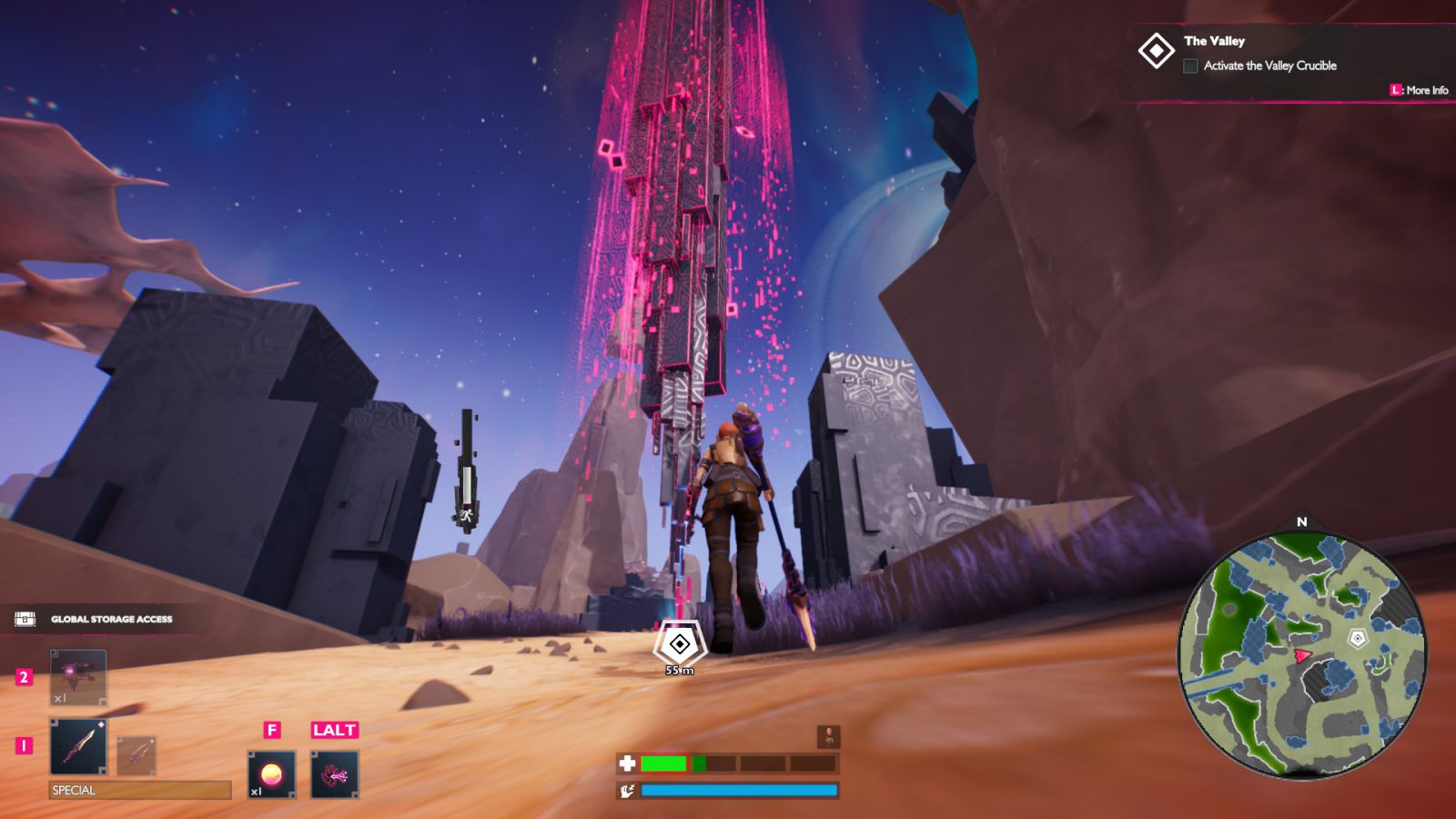 Eden Rising: Supremacy has an intriguing pitch, combining tower defense with survival crafting mechanics, and putting it all online. Rather than just spending cash on towers to defend your base from wave after wave of enemies like in most similar games, you first have to go out into an open world to scavenge and collect materials from foes, which you then use to build your defenses. And to make things more interesting, you can do all of this with the help of other players. It was a strong enough pitch, along with my fond memories of Dungeon Defenders, for me to think that this might be the multiplayer game to occupy me until I inevitably succumb again to the siren song of Overwatch. But while the idea drew me in, I found myself pushed away by practically every element of its execution.

When I read about Eden Rising, I imagined a gameplay loop that blended its tower defense and survival sides, sending waves of enemies at me and asking me to find materials and build towers on the fly as I fended them off. In reality, though, it feels almost like playing two separate games.

The tower defense portions of Eden Rising (called Sieges) take place in your base and revolve around protecting a structure at the center called a Crucible. In each of Eden Rising’s environments — large maps that are connected but essentially self-contained — you’ll find a new Crucible with its own Sieges to complete. You can place towers with a mix of offensive and defensive capabilities anywhere you want within your base, then initiate the Siege at your leisure. For a game built entirely around tower defense, the towers you can build seem pretty rudimentary. You have towers that deal damage, stun, increase damage to enemies, and heal you. Towers get more complex and situational as you progress, but none of them really stood out. When you’re in a Siege, crafting takes a back seat to combat. It just takes too long to craft and place towers to make on-the-fly defense building viable, plus the maps are so large that by the time you run to plug a gap at one end, you’ll have sprung a leak at the other. 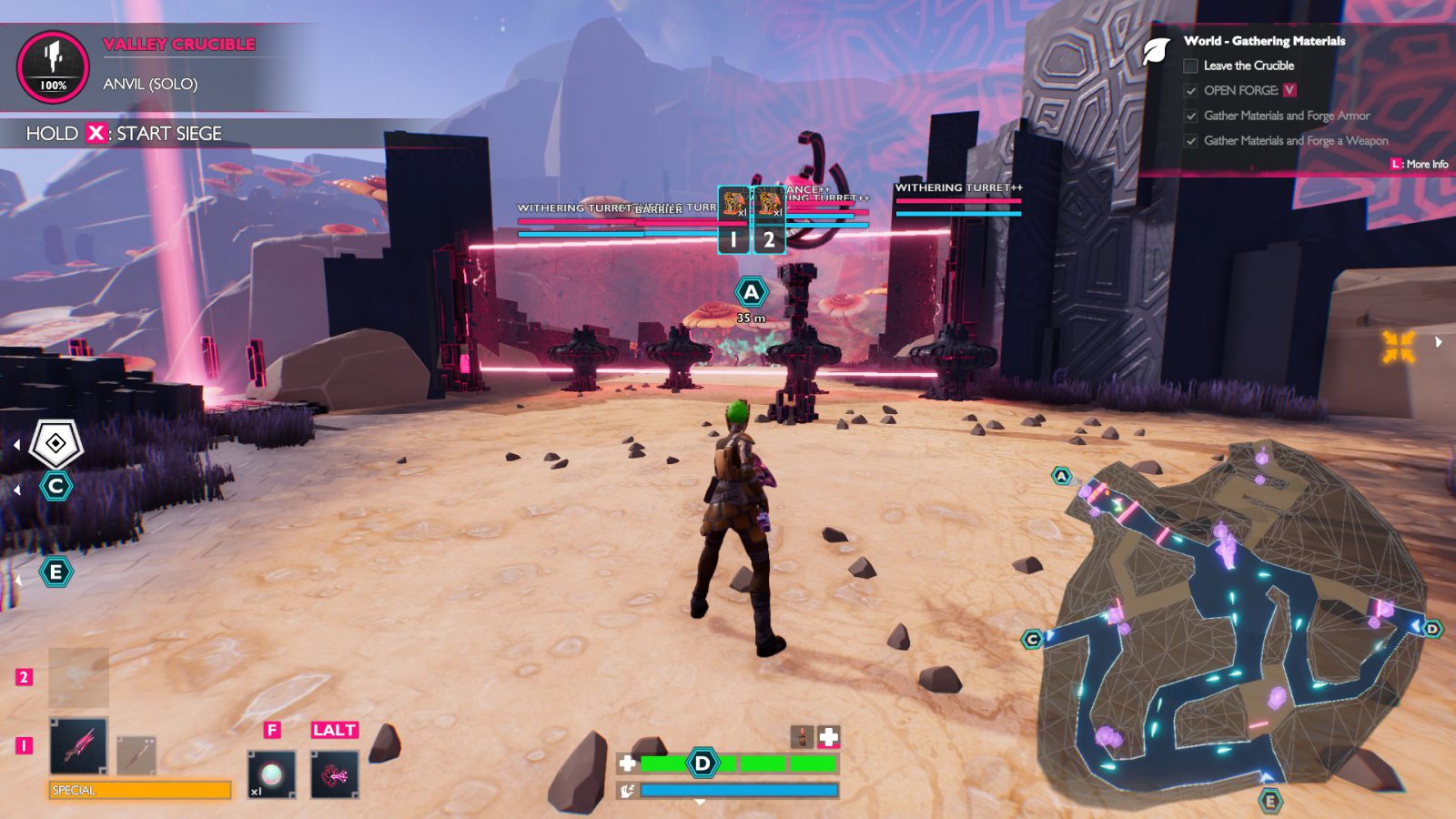 Before you can build towers, or upgrade your equipment, you need to gather materials in the open world. Some you can scrounge from plants, while others you can only gather by defeating enemies. You’ll face the same creatures in the open world that you fight in Siege mode, but they don’t drop items while they’re assaulting your base. The open-world portions of the game were far more interesting to me than the Sieges, at least at first. There’s something compulsively enjoyable about wandering through its open environments looking for the materials you need, but too often it just boils down to killing monsters so you can build gear to kill more monsters. Despite the layout of the world maps being interesting, there’s not much point to exploring outside of just collecting more resources. Once you have enough components, you can return to your base, build the towers you need, and start a Siege.

This loop gives the whole game a disjointed feeling. Your progress through Eden Rising is determined by the number of “links” that you earn by completing Sieges; just exploring the open world won’t really get you anywhere. Still, every few Sieges, you’ll have to venture out into the open world to replenish your stocks so you can build new towers and upgrade your gear. It all makes the open world feel completely devalued. You’re not exploring this strange alien planet and discovering new tools or artifacts; you’re just plundering it for a set number of the exact items that you need to build a specific tower or craft a certain weapon.

Playing online, how Eden Rising is meant to be played, fragments things even further. You can play solo, but I found it too frustrating and boring to continue after just an hour of playing this way. However, when you join another player’s game, you’re essentially setting aside your own progress. You can’t bring your inventory (which includes healing items and towers) into another game with you; you arrive only with whatever you have equipped. When you return to your own game, you won’t bring anything that you picked up in the online session. You can use items you find there to upgrade your gear before leaving the server, but that’s all that carries over. The host player will retain any progress made, but for everyone else, it’s basically like it never happened. That makes multiplayer only really viable if you have a dedicated group to play through the whole game with in a single player’s world. 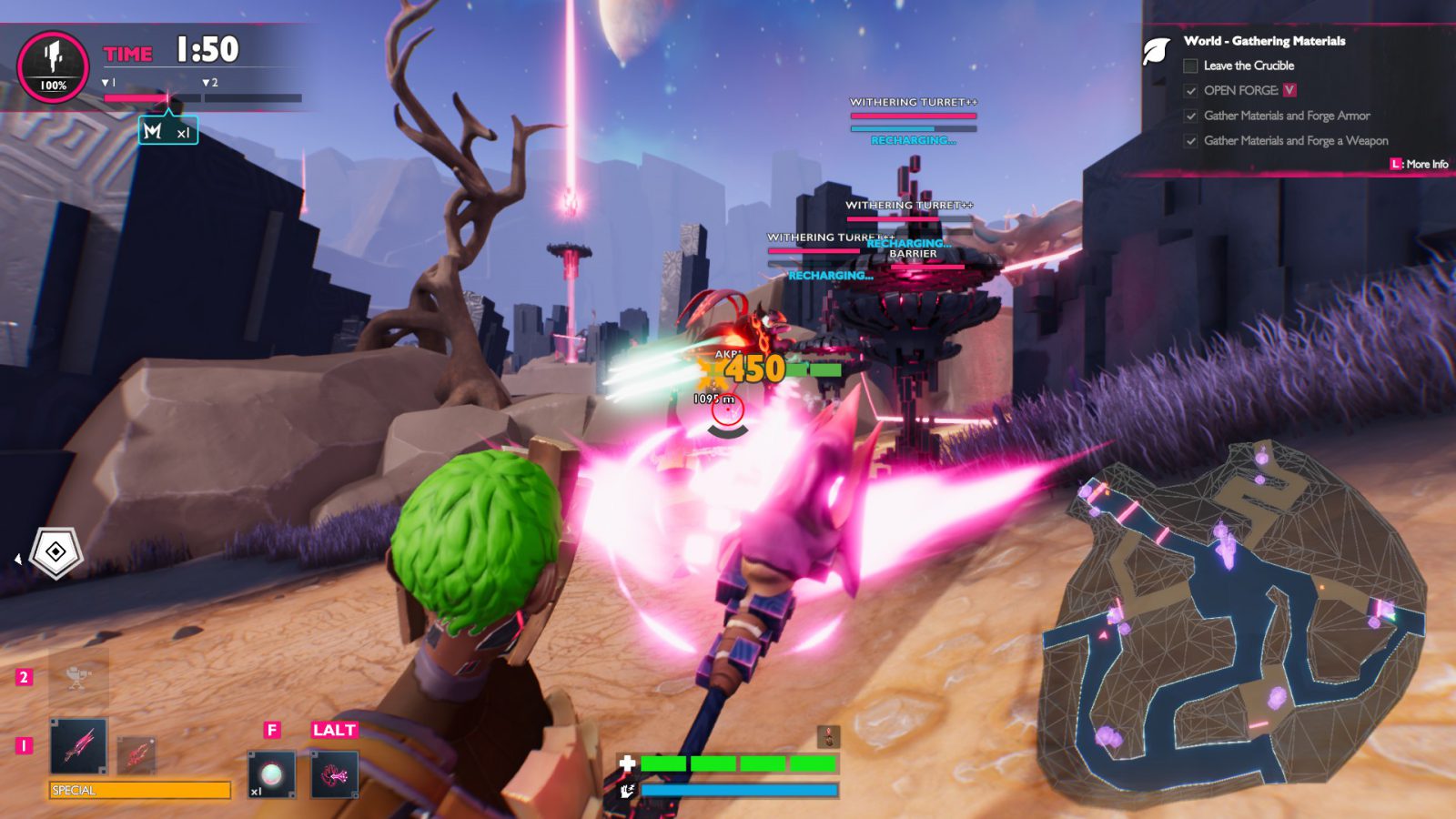 Your enjoyment in multiplayer with random players really depends on who you get matched up with. There were moments when I clicked with a group and things started to feel like they were on the upswing, but Eden Rising has no community moderation features, so you’re completely on your own when it comes to abusive players. You can ignore any player on a server to mute their messages (or kick them if you own the server), but there’s no way to report a player or block them from joining future games. Most players I got matched up with during my time in the game were pleasant enough or didn’t say a word, but the deluge of homophobic slurs from the few toxic players I matched with left me worried about how easy it will be for abuse to spread through the community if solid moderation features aren’t implemented.

The splits between tower defense/crafting and solo/multiplayer were hugely disappointing, but I could have chalked it up to just having the wrong expectations if fighting your way through Eden Rising’s two distinct sections felt good enough. Unfortunately, the combat that connects the two is just as disappointing. You can craft a variety of melee weapons, from massive hammers to swift spears, but they feel very similar to use, even when you get into branching upgrades. They may swing at different speeds or inflict different status effects, but using any one of them is just a matter of mashing the attack button and dodging at the appropriate time. You can also craft a couple of ranged weapons, which I found a little more interesting, but not enough to keep me engaged.

Outside of the sameness of weapons, combat just doesn’t feel good. It’s incredibly repetitive, and the prospect of having to fight a bunch of enemies in the wild just to upgrade my gear so I could fight more of them in a Siege often made me feel genuinely depressed. Each attack and dodge you make locks you into a slightly-too-long animation, with considerable delay between each, which gives combat an almost lumbering quality, even with the fastest weapons. That lack of responsiveness, compared with some hit detection problems, puts you at an immediate disadvantage against the wide-area, difficult-to-read attacks of your enemies. Area of effect attacks have a much larger range than they appear to, often hitting you far outside of their visual effects or pulling you back into range after you’ve dodged away. When you do connect, there’s no sense of weight. You’ll only know that your attack even landed by the particle effects and damage numbers popping up above your foe’s head. 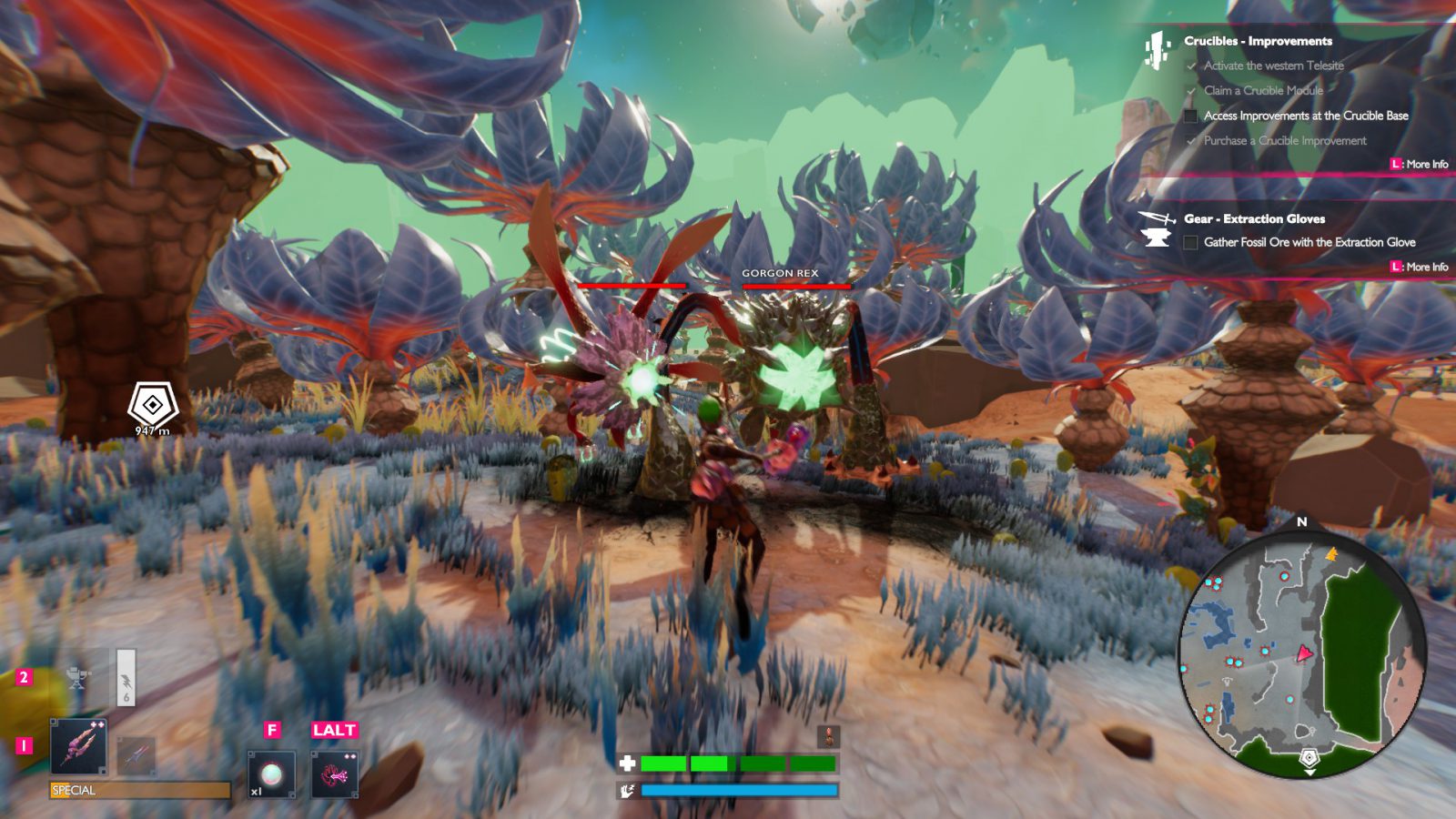 All the inaccuracy of combat is greatly exacerbated by Eden Rising’s rampant network issues. It was a roll of the dice each time I joined a game whether it would function without any problems or be borderline unplayable. It would be difficult enough to hit enemies without them teleporting around the map or simply failing to register hits until several moments after they land. I’ve played matches where I could only use ranged weapons because the world would stand still for two or three seconds after every attack I made before fast-forwarding to catch back up. Other times, enemies moved like slideshows, shooting forward a few feet every second or so, then standing stock still. Half the time I played, my messages to other players would arrive with up to a minute’s delay, or never be delivered at all. And that’s when I can even connect. About one out of every three times I tried to connect to another player’s world, the game simply wouldn’t connect, booting me back to the main menu after a few seconds.

Eden Rising’s optimization is just as bad as its online implementation. Even when I was in solo games, the frame rate would frequently drop to the single digits, or the game would simply freeze for a few seconds. I had bizarre glitches, like my character not rendering so I controlled only a floating weapon, or enemies stopping in their tracks or wandering mindlessly back and forth down a corridor as my towers slowly stripped away their health. Twice I had to Alt + Tab out of the game to close it when it locked up completely.

It’s a shame how little of the game works, because the world itself is fairly interesting. There are tons of interesting designs in the flora of the world, from the braided roots of trees to the multicolored leaves of giant plants. The art style in general looks great; it reminds me somewhat of the design of Ashen or Absolver, and a lot of the weapons and armor look realistically cobbled together from the pieces you find around the world. Unfortunately, it doesn’t really mesh in a satisfying way. It’s more a jumble of disconnected designs than a satisfying whole. The interesting art style doesn’t extend to the planet’s fauna either. You’ll fight the same set of creatures hundreds of times between exploring the open world and defending your Crucible, but none of them are that visually appealing. In the early game, nearly every creature is based on the same core jellyfish-like design, and even when they get a bit more diverse later, their designs tend to be muddy and bland.

Eden Rising is a much better experience if you have a dedicated group to play with, especially due to its interesting monetization scheme. You can play Eden Rising for free for the first tier of Sieges in the first set of Crucibles, but to unlock all of the Sieges and the last few regions, you’ll have to shell out for the paid version. However, only the host of a multiplayer game needs to have the paid version for everyone on that server to benefit from it. It’s a surprisingly generous program, but it’s still hard to recommend Eden Rising over the wealth of other multiplayer games out there.

Eden Rising: Supremacy has an interesting premise, but it absolutely fumbles its execution. It combines awkward combat with a mediocre tower defense game and a bland open world that never feel connected. Add to that poor optimization and shoddy network stability, and Eden Rising squanders its unique free-to-play model and what sounded like an interesting multiplayer time sink.

A committed indoor kid, Bryan moved from Pittsburgh to Los Angeles for a prettier landscape to ignore. He can be lured outside with promises of taco trucks and film festivals, and enjoys trawling through used book stores for works on the occult. Bryan has been gaming since the SNES era and is a sucker for good pixel art.
Related Articles: Eden Rising: Supremacy
Share
Tweet
Share
Submit