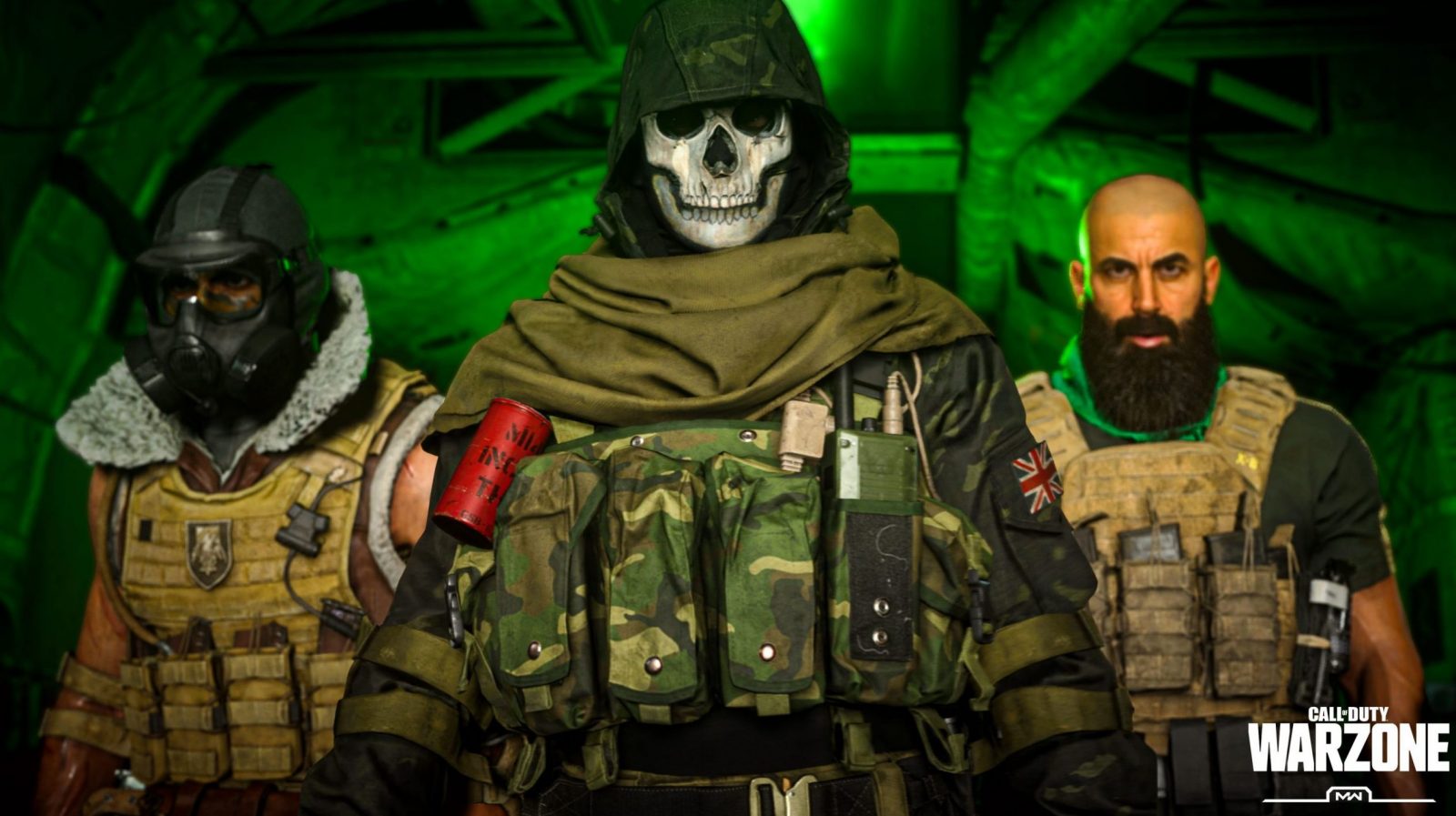 We’ve seen Call of Duty’s multiplayer take on different play styles over the years as the landscape in gaming changed. With a bevy of other shooters being successful in the battle royale market, it’s no surprise that the Call of Duty series looks to throw its hat in the ring and take that challenge head on to make a dent in the battle royale genre. But this time, it’s not just the landscape that’s changed, but the war itself. Call of Duty: Warzone drops 150 players into a massive level and takes warfare further than any of its competition dare try.

With Fortnite being one of the most successful battle royale games right now because it’s in constant development, bringing new modes, game mechanics, skins, and seasons on the regular, it’s easy to see why the competition has had trouble making a dent in that market. But Call of Duty: Warzone raises the bar and innovates where its competition can’t: realism. Each bullet shot from the barrel of a gun feels surreal, and the ability to use the world around you as defense or to either steady the aim of your gun makes taking on your opponent more personal. Though the battle royale mode and Plunder modes are free, it hasn’t stopped Infinity Ward and Raven Software from giving players premium content without feeling like something was stripped away and left on the table to be resold. 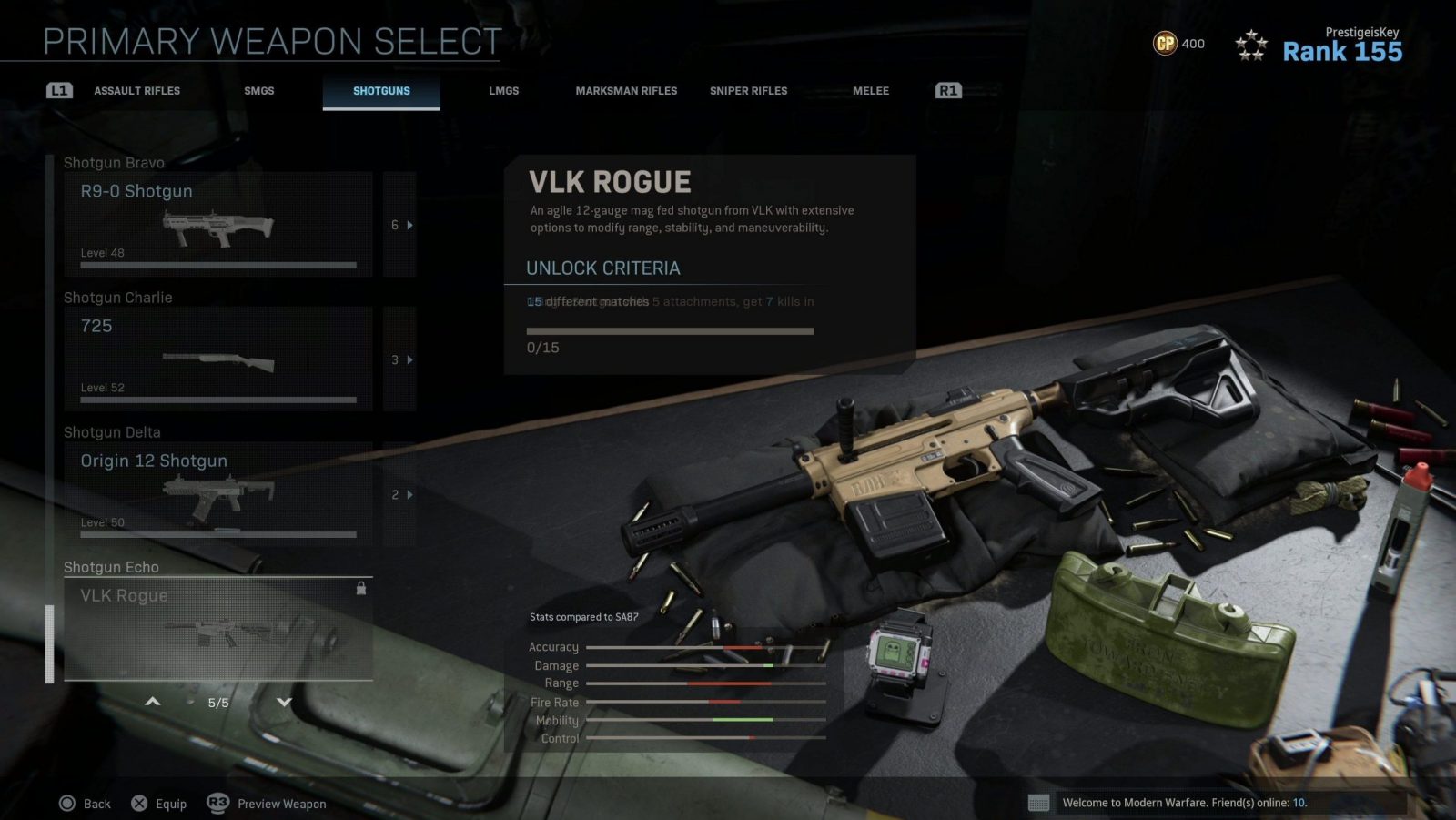 Don’t confuse Warzone with what C.O.D did with Blackout, Warzone brings a plethora of new challenges, experiences, and modes to differentiate itself, in-game and at its core. And it remains familiar to those C.O.D fanatics while not feeling overwhelming to the uninitiated. Like in Call of Duty: Modern Warfare’s multiplayer, players will select their loadouts and configure their style of play at the main menu screen. Once the player is armed to the teeth, the fun starts.
I had the opportunity to play the game on a PC and it ran flawlessly, never dipping below 130fps with all settings maxed and playing at 3440×1440. Even playing in the massive levels where players are running and gunning, I never experienced performance issues. I don’t need to tell fans of the series or shooters that high framerate and low latency is the perfect scenario to win, especially one where you are surrounded by 149 other itchy trigger fingers. The world is meticulously crafted and feels made for warfare. Buildings are well placed to give a sense of realism to a city, and the level of detail is some of the best I’ve seen in a battle royale game.

Jumping into the battle royale mode, you paradrop into a level that’s teeming with players ready to go head to head, but this is just something to feed their appetite. Players wait in an active lobby where they can get their bearings, familiarize themselves with weapon loadouts, and pull off some headshots before the actual game starts. I thought it was a nice touch for those who aren’t familiar with the C.O.D playstyle, maps, mechanics, or loadouts. Each time I started a battle royale match, everyone took this moment seriously, and they should. Players can earn XP and chances to level up their player and/or weapons while waiting for the lobby to fill. This goes for team battle royale mode and battle royale solos. 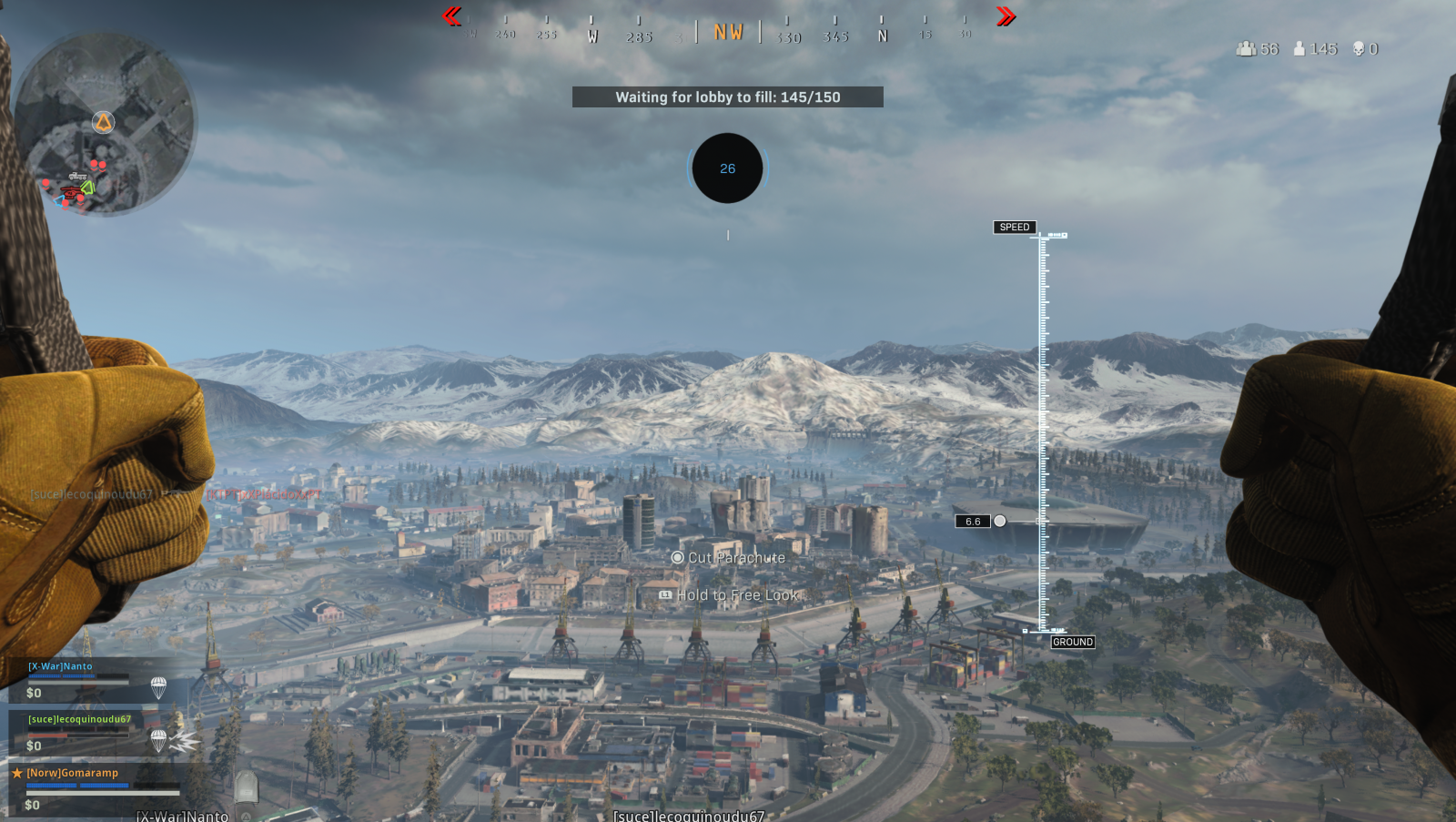 Where Warzone’s impact in the genre hits the hardest is with its ability to engage players with other objectives other than reaching the highest kill number. Though the main objective is to eliminate the opposing team or players, there are contracts hidden in the world for you to collect that give secondary objectives to complete, all while trying to stay alive. Whether it’s locating a special weapons cache or hunting down the leader of the opposing team, this gives the game depth and a sense of purpose outside of just getting the most kills for your team to win. Weapons in the field are also level based, and you can distinguish them by a color-coded system used to show which weapons are of a high level. Picking up an AK-47 with no attachments makes a big difference when going against someone with a red-dot laser and an extended magazine.

Moving throughout the world and listening for footsteps definitely got my adrenaline pumping. Running to the top of a building to get a clear view of the battlefield, I was able to see gunfire and destruction across the battlefield clearly. With a high-powered rifle resting on the ledge to steady my aim, I was picking off players as they tried to sneak from building to building, and even their team members who tried to save them before they ‘crossed over’. But like all shooter experts, they caught on after a few kills and came my way. Not all was well on the offensive front, as there were times when I was within a stone’s throw of someone with a shotgun aimed at their head and still lost the battle. I wouldn’t complain if they had a weapon to match the power, but they were shooting me with a pistol. It also wouldn’t be the last time I experienced either a weapon imbalance or others complaining that their RPG didn’t kill anyone they fired at. 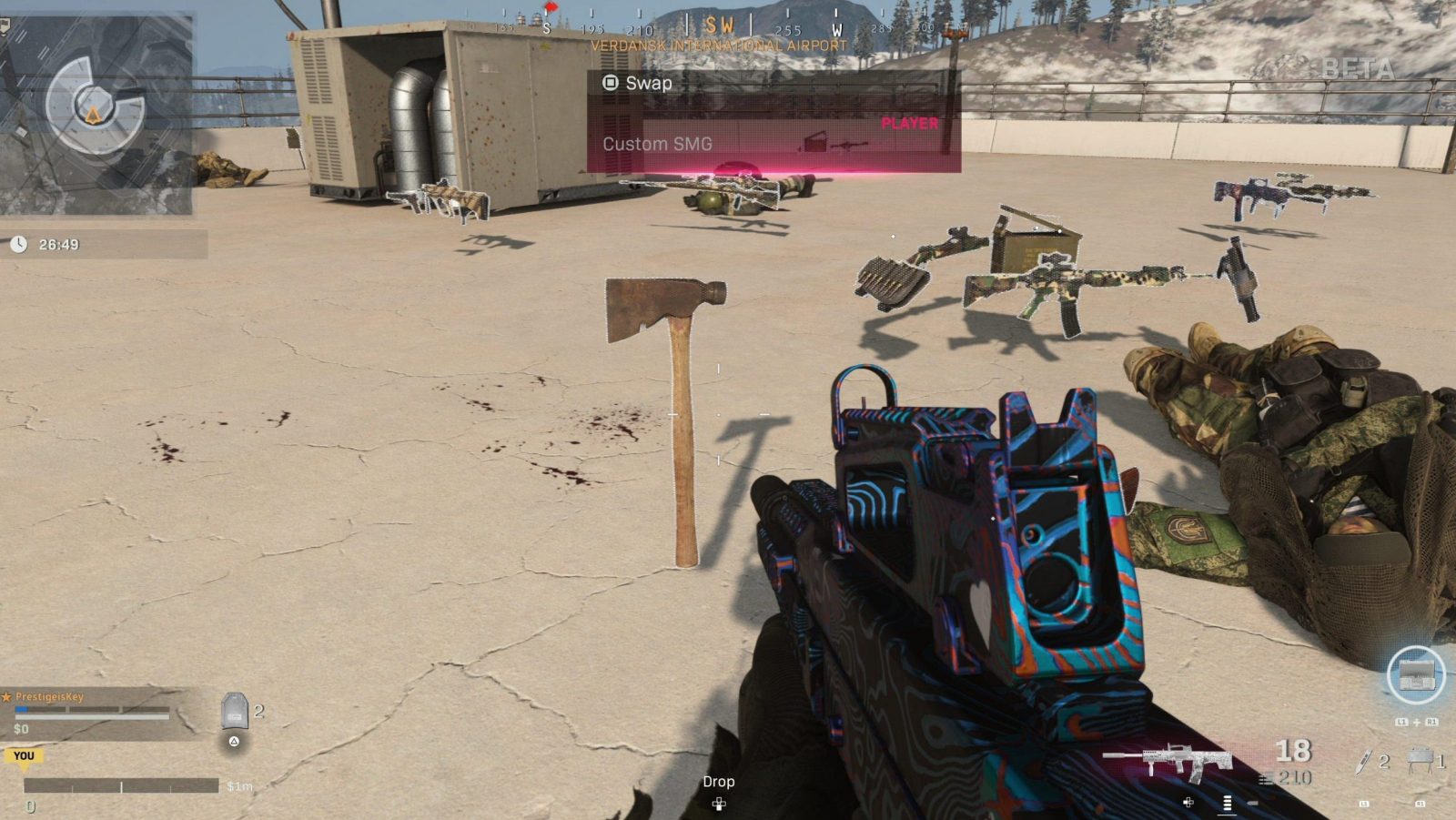 To keep players in the game longer because no one likes watching from the sidelines, players can pick up additional armor plates that add to their defense. When your armor has been damaged, you can locate additional armor plates around the world and stuff them into your Kevlar vest, adding longevity to your life on the field. If a bullet in the backside doesn’t finish you off, the level itself will. Staying alive and remaining on the battlefield is something that the developers also took into great consideration. So, to mitigate everyone’s ability to hide until the last player has expired, the battlefield shrinks every few minutes, filling the non-playable areas with a deadly gas. Yes, it’s something that other battle royale games have done, but if it’s not broke don’t fix it, right?

But don’t think life’s over just because you’re down. Instead of dying, you are sent to the Gulag. Here, you’ll fight with no weapons against other players who have died for a chance to get back in the game. After winning a hand-to hand fight, you’ll go one-on-one with another player to see who gets to jump back in the game. Except you two have guns, randomized by the game after you won a round of fisticuffs. If you lose in the Gulag, you’re out until there is a winner, or your team can bring you back by using the cash found on the battlefield to revive you. 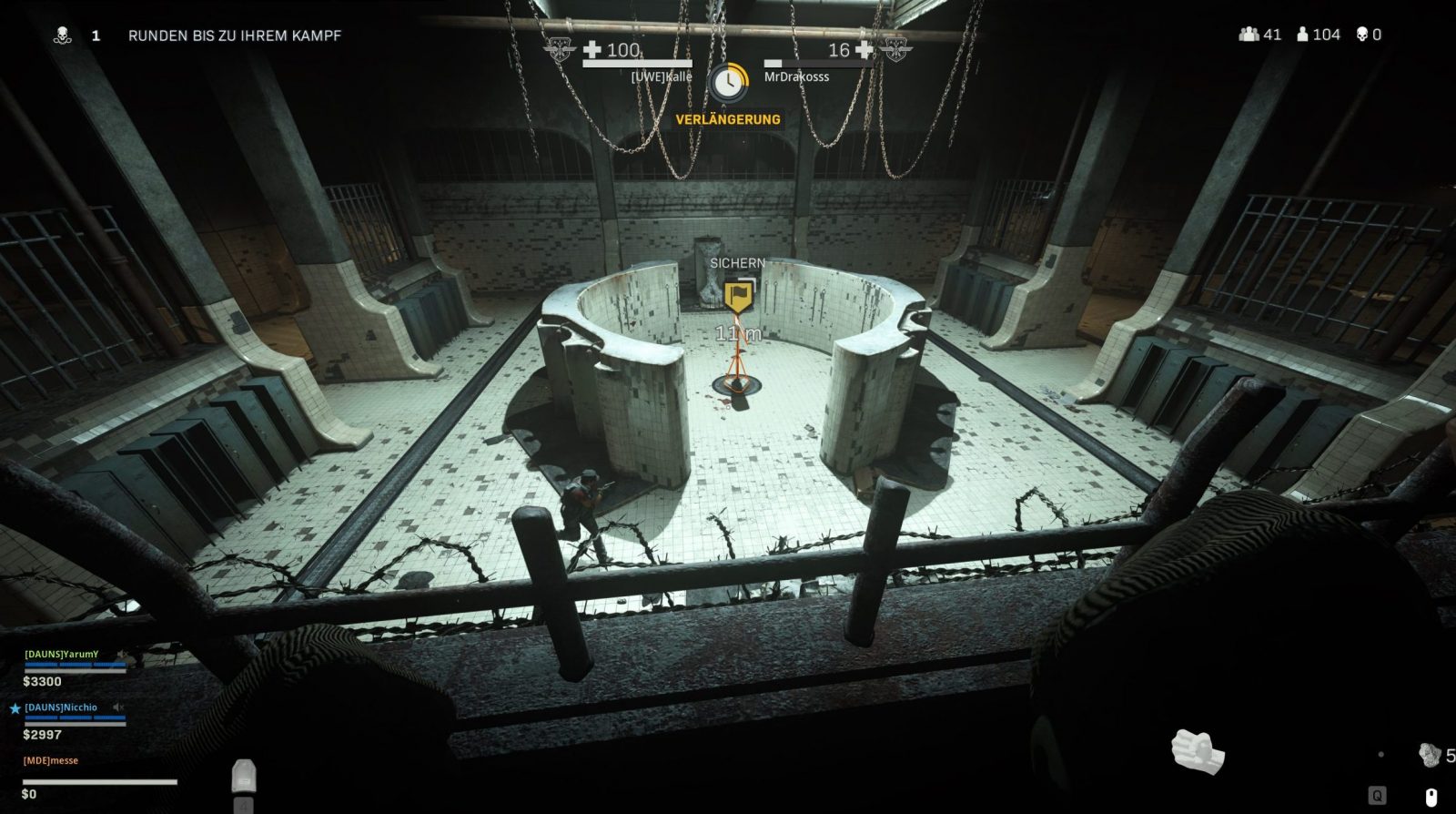 In Plunder mode, things are a bit more relaxed, but I use that term loosely. No, there’s no invading gas to suffocate you and no worry of dying in the Gulag, but there’s the looming threat of defeat around every corner. The objective: get the most cash and extract it before someone on the opposing team takes you out and snags your bag. I know that sounds basic and a complete departure from what the battle royale was, but it’s not. In fact, it brings strategy and teamwork to a chaotic world. You can grab the cash from killing the members on the opposing team and taking their looted bundle, finding cash around the world in crates, and finding cash stashes around the stage. But all that adds complexity to the gameplay. Because you have to extract the cash to reach the allotted amount to win, going in guns blazing isn’t always the smartest tactic.

With my team, some of us opted to move in as infantry and take out the opposing team, taking what they’ve looted. Other members looted cash in the world or backed us up in the event we were swarmed. My tactic was to follow behind the enemy until they netted a nice amount of loot, then took them out quick and easy. By doing so, it put me on the map and made me a target for everyone to see. Players who have the most have cash on them become targeted on the map. To extract cash, you can call in a helicopter back at your base to fly in to extract the loot or use deposit balloons found in supply crates in the world. I tried calling in the helicopter after looting a good amount of cash my first time playing, and with its loud approach, it attracted the enemy. They waited for it to get to the landing pad and for me to make myself visible and tried to take me out. Luckily, I was able to deposit my loot before being taken out. It’s strategic tactics like this that change the way Plunder is played.

With all the different battle royale games on the market, all seeming to offer the same experiences, Warzone might give the most realistic, precise, and investing performance of them all, but it will need to stay innovative. Sounds of ricocheting bullets, footsteps of the enemy, and a highly detailed world keep it a cut above its competition. I easily found this to be one of my favorite battle royale games to date.

T.K. is a freelance writer, narrative designer, and author. Writing and developing narratives and giving voices to digital world and characters is his passion. As a game writer, QA game analyst, and editor for Gaming Trend, he enjoys being a part of the gaming industry.
Related Articles: Call of Duty: Warzone
Share
Tweet
Share
Submit