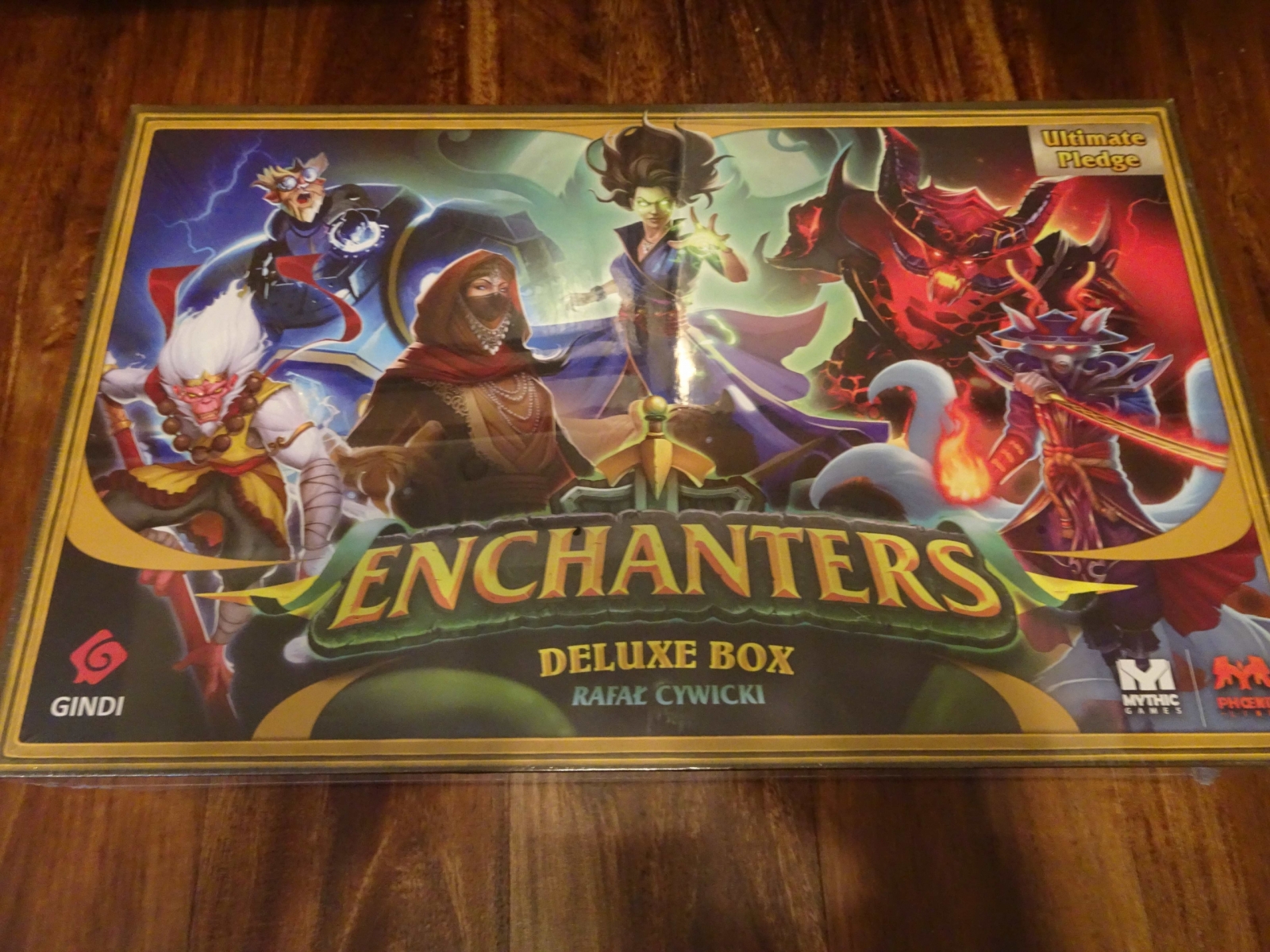 Enchanters is a 1-4 player game where players will either play competitively or cooperatively to build up their stats on magic items by progressively playing more ‘enchantments’ on them. The Deluxe box is a collection of many expansions, along with the original game first released in 2016.

One of the things that stands out right away is the presentation of the big box. Opening it is a real treat to see just how much stuff is packed into this thing. Complete with card holders, organizers, bags, and everything, it was clearly given some thought and attention, so it really stands out in a field where far too often players open a game to find a useless box to hold stuff. I am not exaggerating when I say there are somewhere around 30 various holders crafted into the tray, and my only complaint is that it would have been nice to have some sort of guide or recommended set-up to organize the cards.

While the game does give a ‘quick start’ guide for new players, it was largely inadequate as the cards it references are not clearly labeled or set aside. Being a new player to the series presented with this absolutely massive amount of content and cards, the guide really should have had something to set me on my way. This is perhaps one of the major complaints, as the game itself is actually really easy – once you figure it out – but presented with a wall of over 1000 cards is intimidating. There is no reason in this day and age of gaming, especially with a game of this size, that there was not better set up guides or anything to get players on their way, since as it is, it took me hours to figure it out on my own. 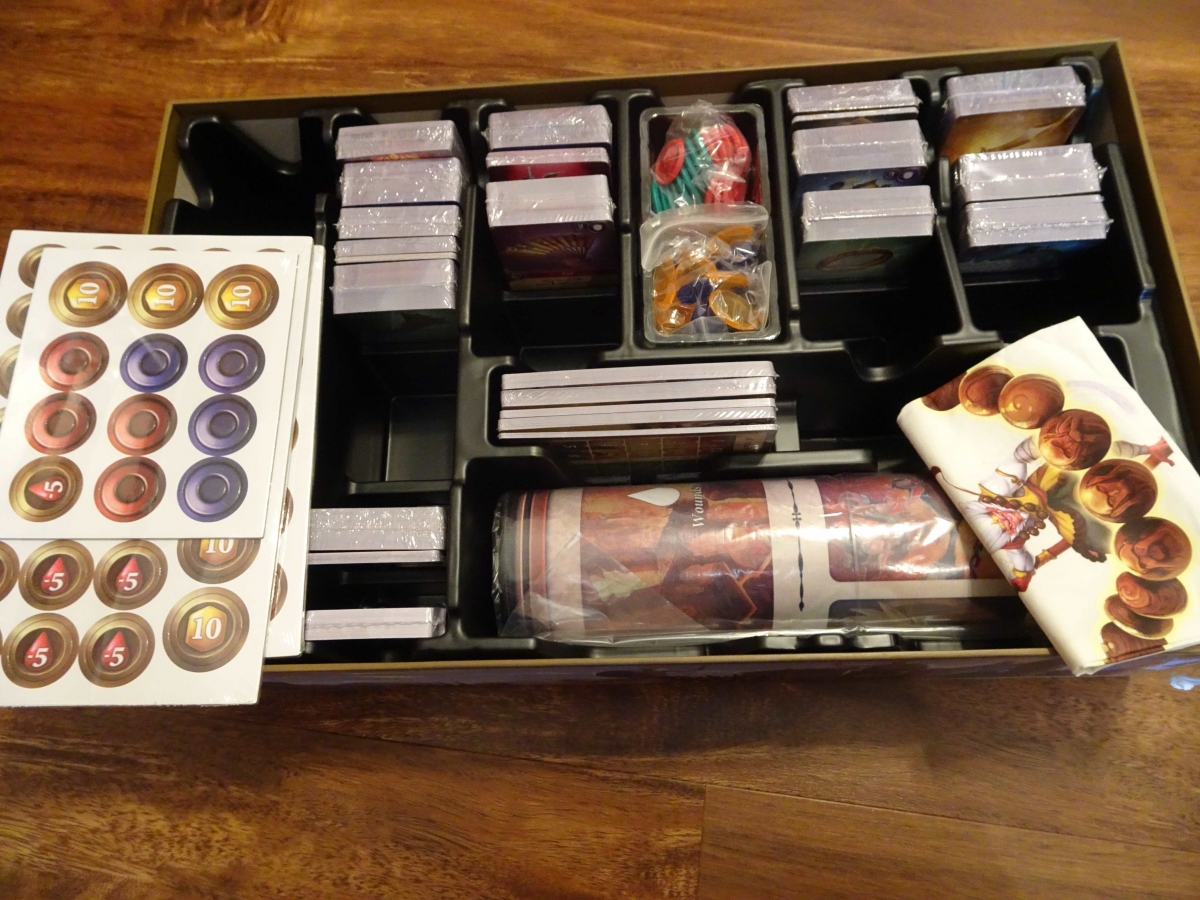 There are a few other issues that drag the game down slightly, such as the kingdom dividers being too small, a bad misprint on the front page of what each group is (the entire expansion is wrong), and multiple issues throughout the rulebook. The rulebook is an obvious weak point with its slew of errors, not just a missing comma, but also outright wrong references and lack of good direction. Sad, because overall the package is really solid.

Regardless, the quality they put into this really stands out. All the chips are in tight plastic, card pack after card pack are wrapped, sitting patiently in their varied holders, and in this edition the play mat was tucked into one edge with plenty of room to spare. While the cards, the holder, and the general box are tremendous high points, and deserve significant praise for their presentation, a few small things stuck out that were negatives. First, the playmat color looks a little washed out. I have yet to see a playmat or really anything gaming related printed onto cloth ever look crisp, but given how sharp everything else looks, the dull look of the playmat was a small sad point.

Another issue I have is with the tracker board for attack and defense. The entire purpose of the game is to increase (and consequently track) attack and defense, and to be blunt, the board given for this is simply far too small. Further, any single knock and the little piece can bounce between numbers, or even skip to the next column and give huge discrepancies. The last disappointment here was the ‘upgraded’ components: the gems, wound markers, and so on. While the gems are barely passable (why they were not made clear, instead having some degree of opacity seems like an obvious mistake) the other upgrades are simply inferior to the tokens. As seen in the picture, the cardboard tokens are vibrant, clear, and in the case of the wound markers, different sizes. The plastic ‘upgrades’ feel cheap, and in my opinion, are simply worse; for example the ‘5’ and ‘1’ wound marker are too similar, as there is no visual cue or size difference, simply a minute difference in the inlay. 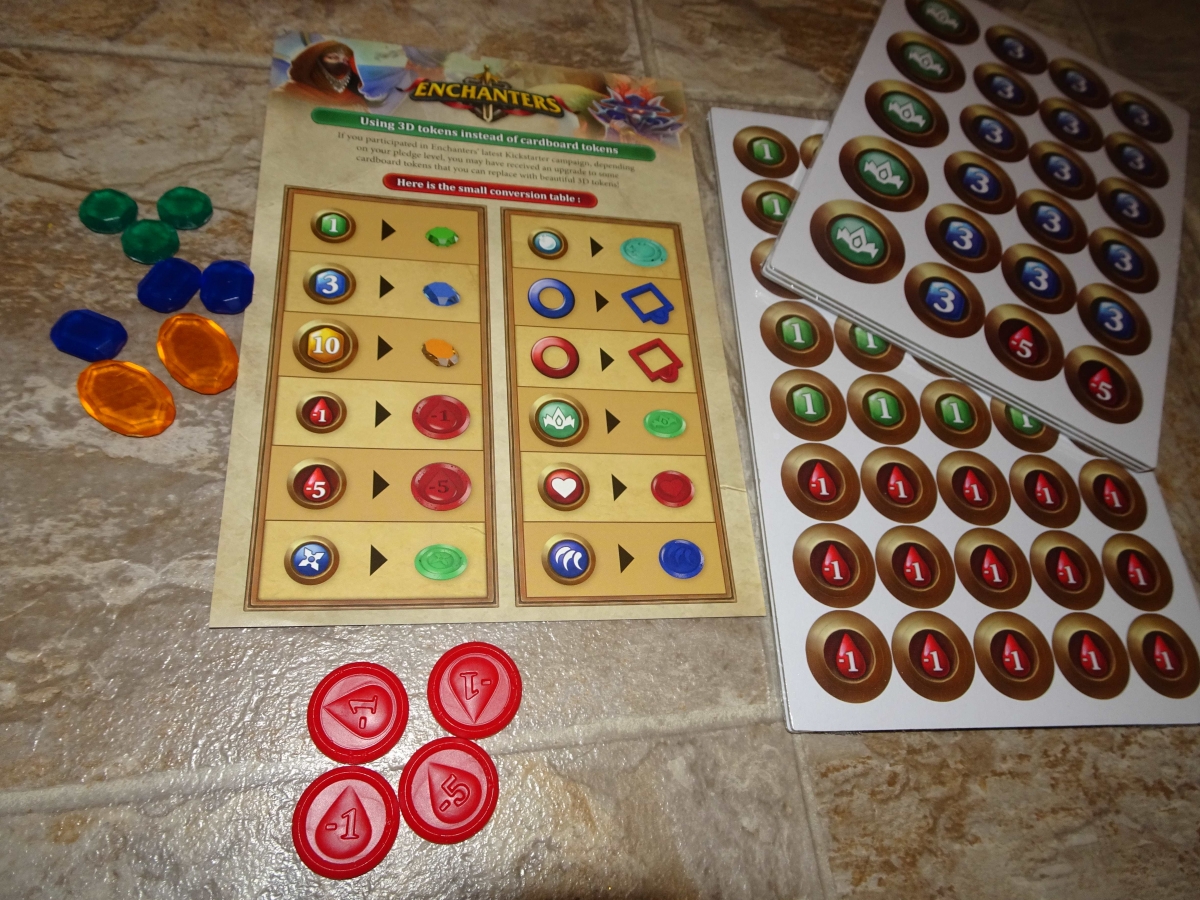 The game itself is a really good example of a simple idea, with layers added on. At its base, players are building a single item throughout the game, through upgrading two piles, the item itself and its ‘enchantment’. On your turn you generally either change the item, boost its enchantment, or fight a monster. The item and the enchantment generally either give a current bonus, or a permanent bonus, so for example a sword might give a +2 to attack when it’s on top, but a different item might give you a permanent +1. This latter part is how players get stronger throughout the scope of the game, improving both their attack and defense.

The key concept the game revolves around is a sliding track of cards and players managing their limited amount of gems to purchase these cards. At any time there are six cards showing, with the newest card on the right, where items are the most expensive, and then sliding left and becoming less expensive, until it is free on the left side. This introduces tension between waiting for a card to be cheaper, but not wanting another player to scoop it up before you do. It’s a good mechanic that has small trappings of bidding, bluffing and pushing your luck inside it.

At any time instead of boosting an item, players can instead fight one of the monsters on the track. Fighting, like the rest of the game, is fairly simple but it works well. Monsters have two stats: their health, and their attack damage. You can only fight the monster if your attack is higher than their health, and if so, you simply take the card from the track (‘defeating it’) and take the attack damage in health, subtracting any defense you have. Often there is some one-time effect such as getting extra money, or affecting a player in some small way.

So, the general premise is easy enough: pick a card off the track, either boosting stats or taking on a monster, but where the game really shines is its variability. See, at the start of every game players either pick or randomize what ‘kingdoms’ of cards make up the adventure track. Each set of kingdom cards (such as the Unicorns, the Cultists, the Bandits and so on) are all constructed basically the same: an item or two, an enchantment or two, some monsters, and a boss monster/dragon. However, they all have widely different feels to them, and when combined offer wildly different experiences. 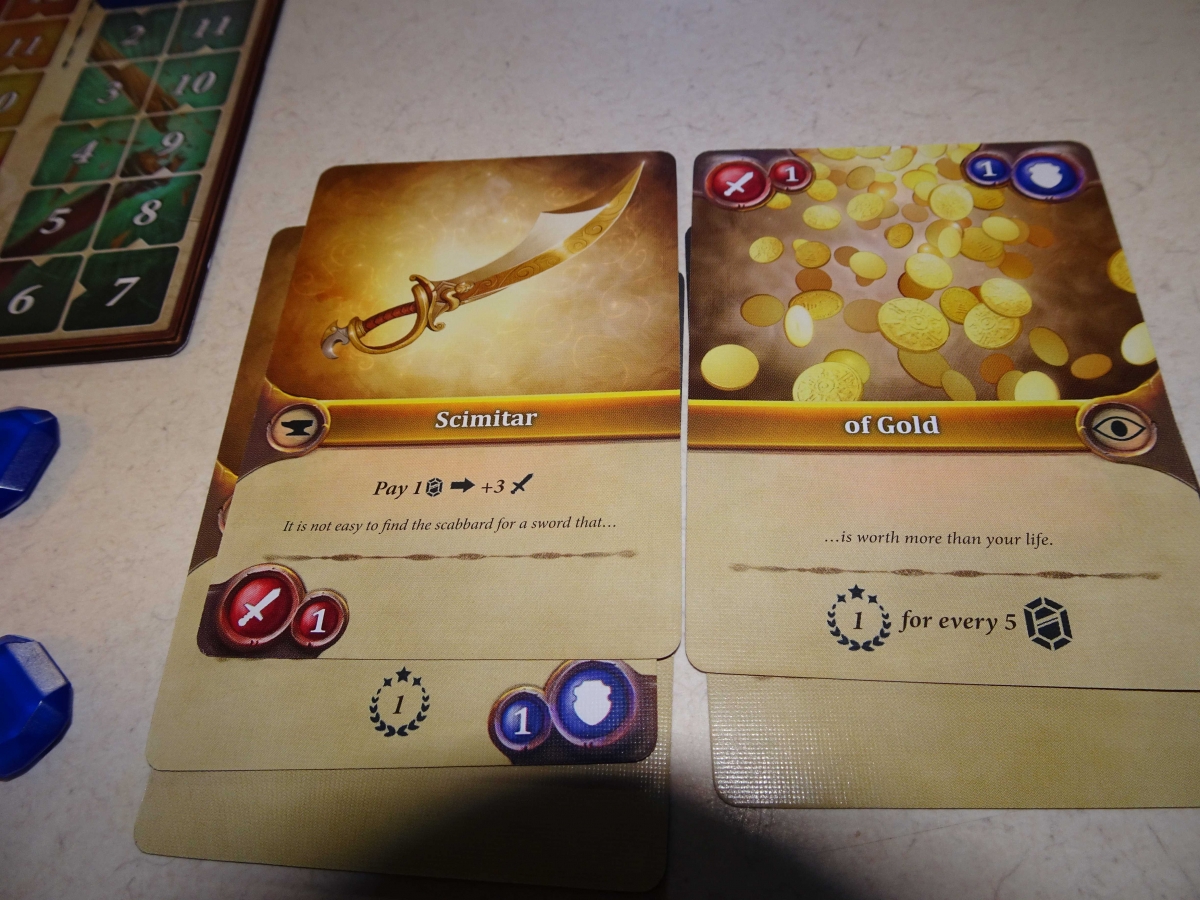 The Bandit deck, for example, is all about money (‘gems’ in the game) with a majority of the cards helping you get crazy amounts that make this part of the game seem trivial otherwise. Included are some cards that give more points at the end of the game simply for having more gems, so when this deck is in play should players try to go for the most points this way, or leverage all the wealth into getting newer items faster than their opponent? The unicorn deck makes healing a lot easier, allowing more reckless battles; or the Barbarians deck that focuses on increasing attack power. Some decks have special icons that are self-referential, such as the Undead, which gives points or powers for more Undead cards a play possesses.

Setting up for the next battle and picking what deck is a really fun experience, even just the bold colors of each deck is a nice aesthetic. It is cool mixing the bold reds, blues, green and yellows together and wondering how the combo is going to play out. What makes this even better is there are a lot of unknown combos that suddenly become viable, like a Barbarian card that gives you money when you rest, and bandit cards that give you victory points for money, so suddenly as these cards pop up, random goals appear that may not have been imagined at the beginning.

One of the blessings of a box this huge is the number of extra options that are included. They range from simpler changes, such as giving different starting stats, to outright scripted boss battles. Something that really stands out is how good they are able to extend the basic experience, allowing more complex experiences for players deeply familiar with the main game. There is a lot here, such as ‘quests’ which allow players to claim bonuses for varied things, like beating down monsters or having high attack. 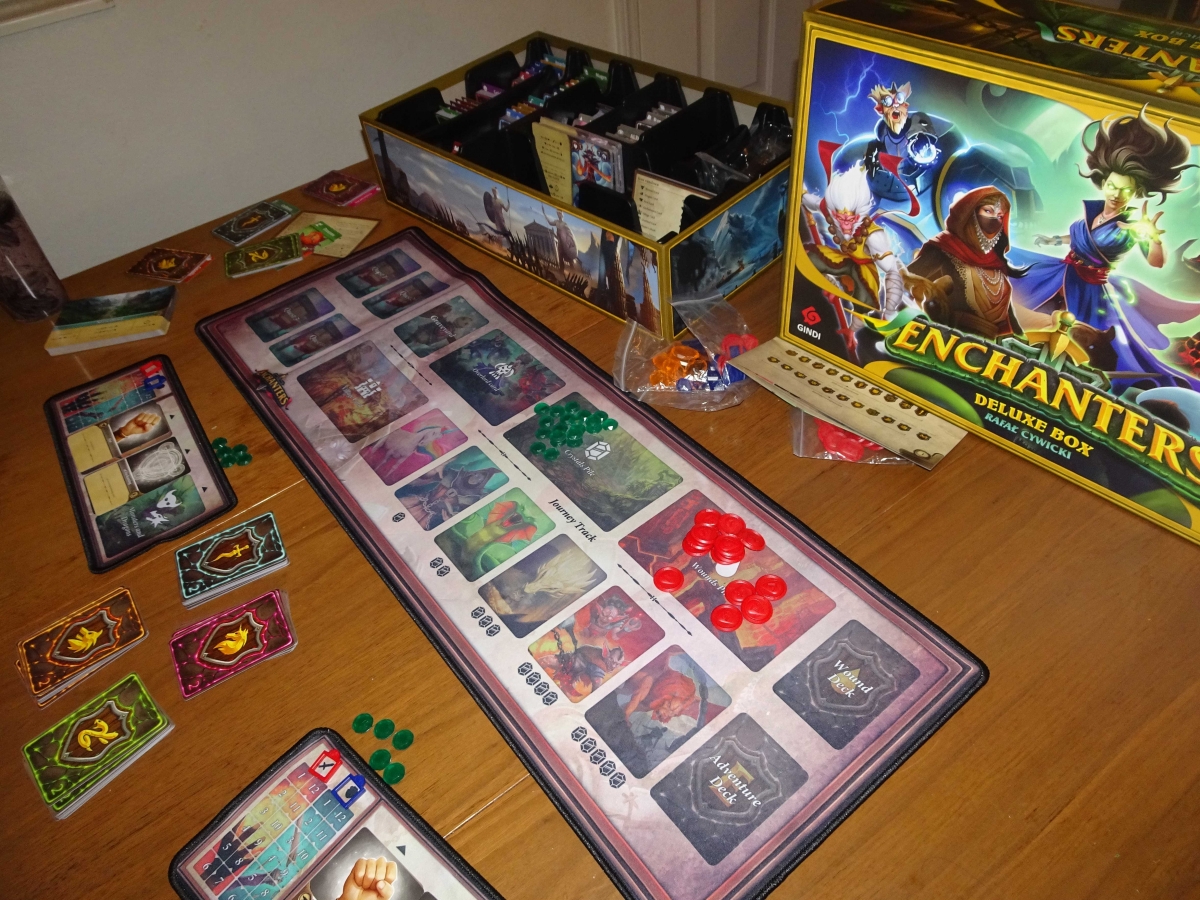 The boss battles are among the high points of these additional options, but fairly complicated, and therefore hard to get into play unless there are dedicated players wanting to learn the basics first. Most of these have basic reactions that simply fire, but a few have scripted decks that really change the game into a more intense experience. Again, it’s a testament to how versatile the core game is, that these things can be included and still feel like the game.

One of the notable weaknesses is the included Automata to either play single-player or add another player. Essentially it is a deck that randomly removes one of the 6 cards, and pulls them to an area that sometimes lets players pay a penalty to get to them. While ‘random’ in that it is pulled from a deck, it only targets 3 specific locations, which makes it worse. Further, just having the extra decks around is unnecessary for how weak of an implementation it is, since just rolling a D6 and taking the card away would serve the same purpose much better. It is disappointing in a time when ‘Automatas’ are really starting to shine in the hobby, especially being so blatantly bad in its design and execution.

Overall, the game was a pretty big hit. Even the small fact that each card has its own flavor text, with different copies of the same card having different text, goes a long way to the feeling of quality here. Further, its simplicity allowed some lighter gamers to enjoy the experience, while still possessing some depth for players that want to dive deeper into the experience. It was a surprisingly positive experience, going in without any former knowledge of the series.

Enchanters: Deluxe Box is a culmination of many years and expansions of a basic card game representing a hero saving a town. The core experience is simple and easy to teach – even if the original unboxing is rough – and the variability is on a level typically unseen on simpler games like this. The raw abundance of cards, expansions, and options really make the game a great experience. This is not the type of game I typically enjoy, but was largely blown away by its quality.