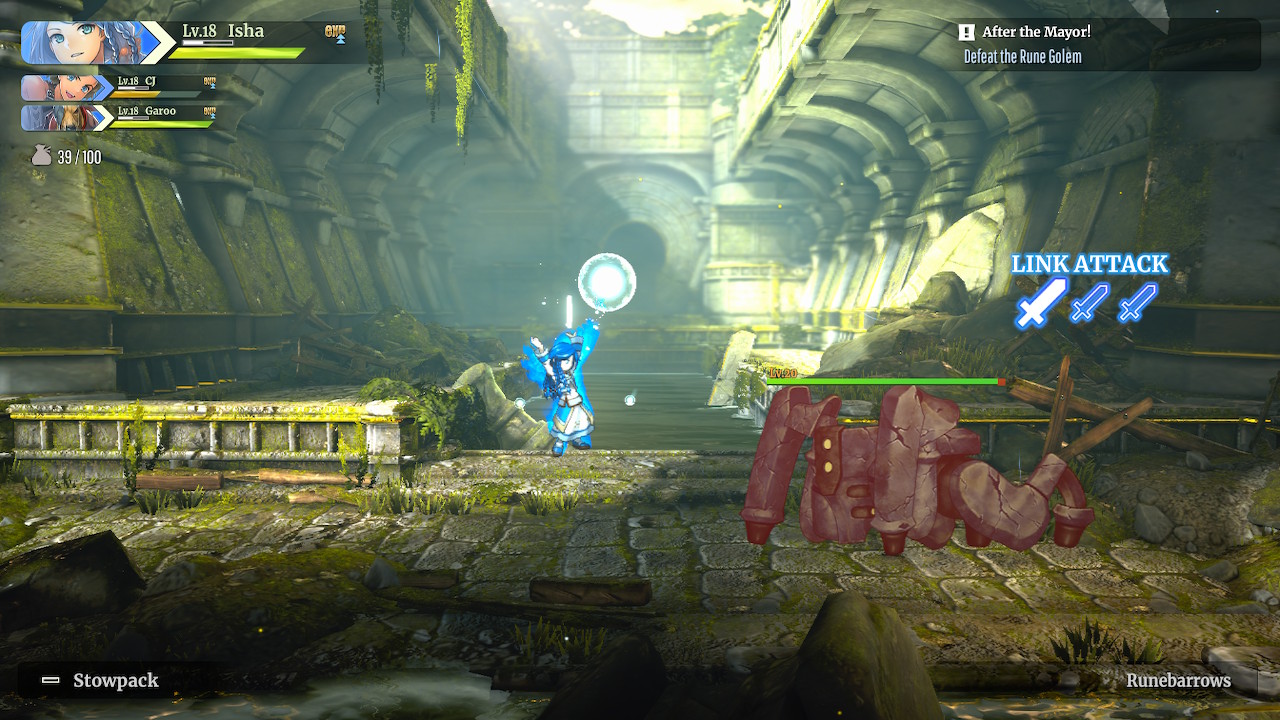 The Barrows of New Nevaeh have long remained sealed, until a massive earthquake unearthed them beneath the quarry. With tons of ancient artifacts just waiting to be discovered, the town invites adventurers from all over to explore and find their fortunes (pre-tax of course). CJ is one such adventurer, or honorable scavenger, and along her adventure she’ll team up with the Kangaroo-man Garoo and the acting Mayor Isha to lay bear all of the Barrow’s secrets and grow the town of New Nevaeh.

Eiyuden Chronicle: Rising is a prequel to the upcoming Eiyuden Chronicle: Hundred Heroes featuring a few characters you’ll also encounter in that game. As CJ and co., you’ll platform and battle your way through sprawling dungeons to complete quests, gather resources, and unlock new abilities. It’s something of a town-building game, like Dark Cloud or Actraiser, but you can’t choose where anything goes; only upgrade them to get better equipment. It’s simpler, but still a ton of fun given how many side quests there are in the game.

The main story, while incredibly charming, only contains a fraction of the total amount of things to do. As you progress, you’ll constantly be inundated with side quests asking you to talk to other townspeople, defeat monsters, or gather certain materials in dungeons. There’s not actually a ton to explore here, but aside from the arduously slow opening hour it’s paced well and they’re surprisingly fun to revisit. Each area contains at least a few screens you can’t reach on a first visit, and need to add a new member of your party or grab a certain Rune Lens element.

Each of the three characters has a different moveset: CJ is quick and uses twin climbing axes; Garoo is slower but wields a powerful greatsword; and Isha is somewhere in the middle and has access to ranged magic. Unlike most action games, you play as all three simultaneously swapping between them simply by pressing their attack button. You can even chain together attacks by starting a combo with one character, then switching to another a few times in a row. It takes what starts out as feeling like a slow combat system into one that’s blisteringly fast, though you do have to be wary of the cooldown on the chain combos. By leveling up the town, you can chain even more attacks together for devastating damage, and add in defensive and offensive elemental equipment as well as accessories and you’ve got a system with a shocking amount of depth. 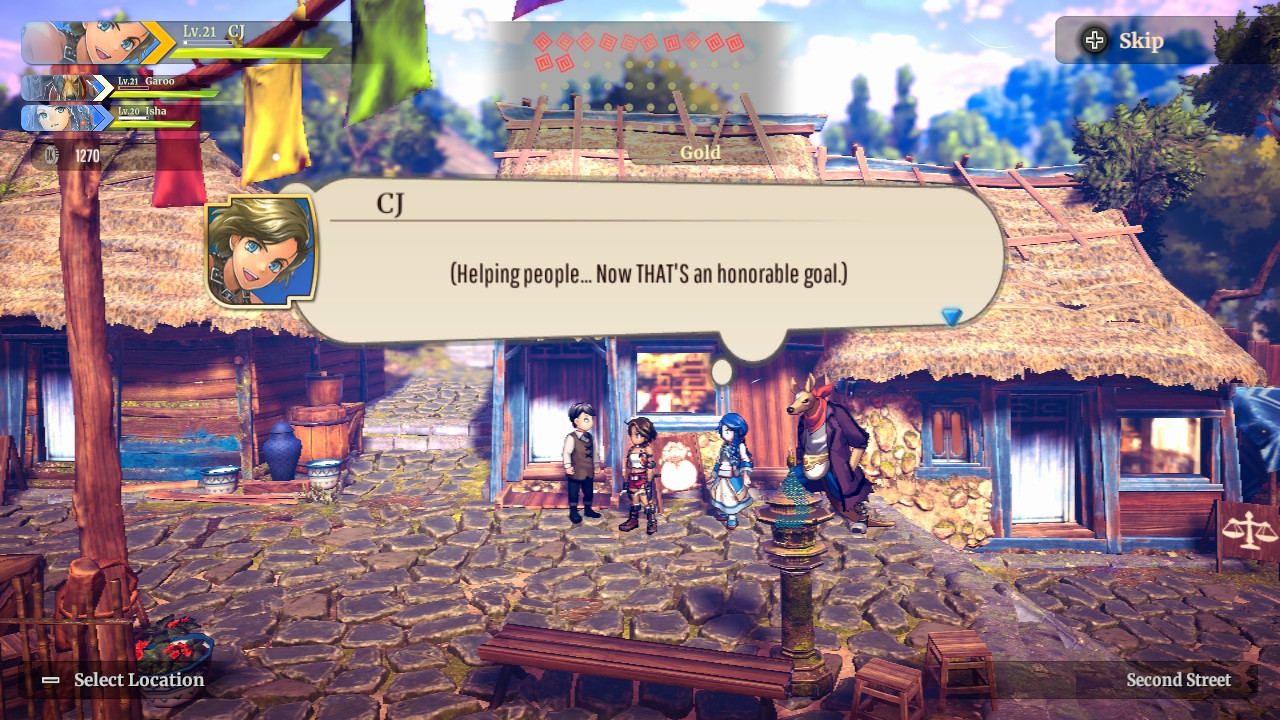 To level up the town, you need to complete a certain number of side quests, represented by CJ’s stamp card at the top of the screen. She’s kind of obsessed with these things, which leads to a lot of fun banter between her and Garoo. Every side quest and some main quests will reward you with stamps, so everything you do will work towards improving your combat abilities so you can get more resources and thus finish more quests. This loop is incredibly satisfying, but I do find that not enough quests reward you with money, which is crucial to buying any sort of upgrades. This can be a bit frustrating, but there is a pawn shop you can utilize if you want to part with any materials for cash. I couldn’t really tell what I would need later, so I kept everything, which did lead to me being underpowered for a few sections.

The areas you explore are rendered in gorgeous 2.5D, though the characters themselves are more of a mixed bag. Much like Anno: Mutationem, Rising uses non-traditional animation for the pixel art characters that makes them appear as if they’re being puppeted around. I just don’t find this style appealing, the animations are just too smooth and uncanny. As for the music, it’s all great but it just doesn’t seem to fit sometimes. For example, the first town theme sounds more like a jungle, but this is quickly remedied by upgrading the town and hearing new tunes. 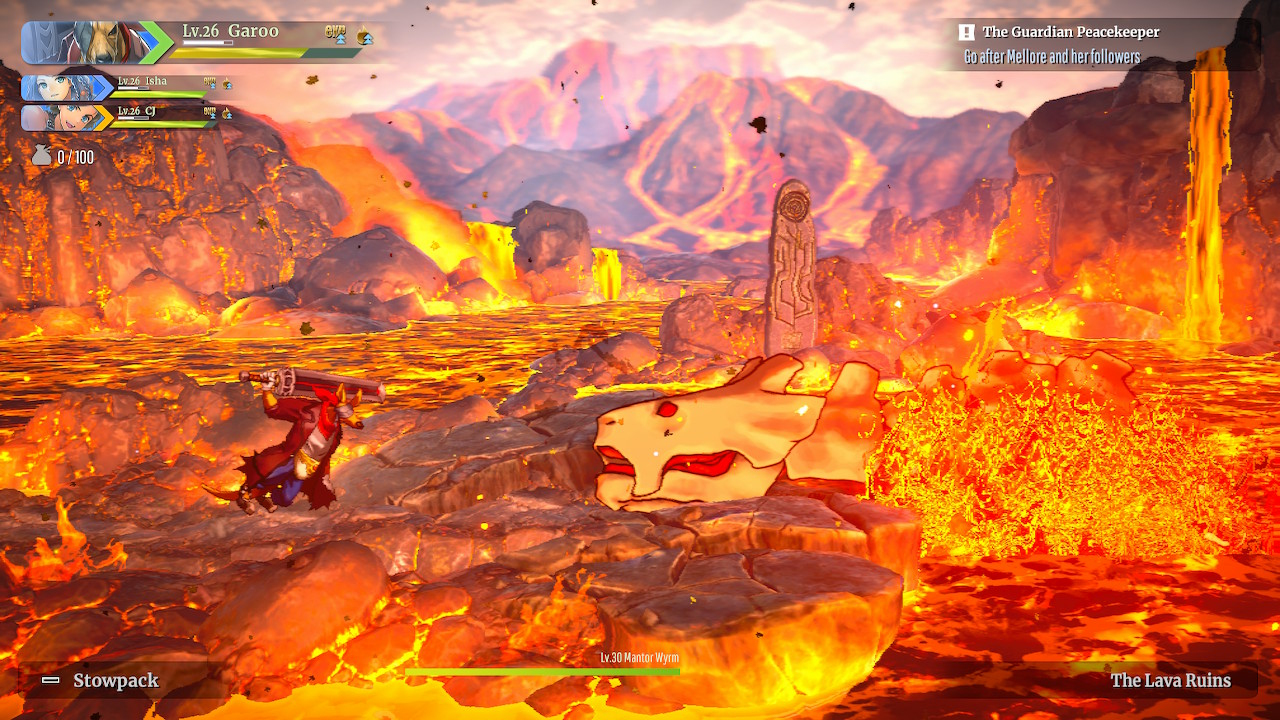 Whenever you get tired of the grind, you can progress in the main quest to reach new areas. The story, while relatively simple, has a lot of heart and our main trio has great chemistry. It’s great to watch CJ and Garoo go from begrudging partners to ride or die best friends with more than a few bumps along the way. The start is very slow as I’ve mentioned, but the ending has the opposite problem – it rushes to introduce new conflicts and then immediately resolve them all within the point of no return. The game is clearly saving a bit more character development for Hundred Heroes, and it does suffer for it. However, if this is any indication of the quality of the game to come, I can’t wait to meet up with CJ, Garoo, and Isha once more.

Eiyuden Chronicle: Rising packs a ton of fun into a small package. The combat has surprising depth, even if the game starts out unbearably slow, and the few areas you explore are fun to revisit and discover all the nooks and crannies. The town building aspect fits perfectly into the gameplay loop, and makes for an addicting experience.

David is the kind of person to wear his heart on his sleeve. He can find positives in anything, like this is a person who loved Star Fox Zero to death. You’ll see him playing all kinds of games: AAAs, Indies, game jam games, games of all genres, and writing about them! Here. On this website. When not writing or playing games, you can find David making music, games, or enjoying a good book. David’s favorite games include NieR: Automata, Mother 3, and Gravity Rush.
Related Articles: Eiyuden Chronicle: Rising, Indies
Share
Tweet
Share
Submit