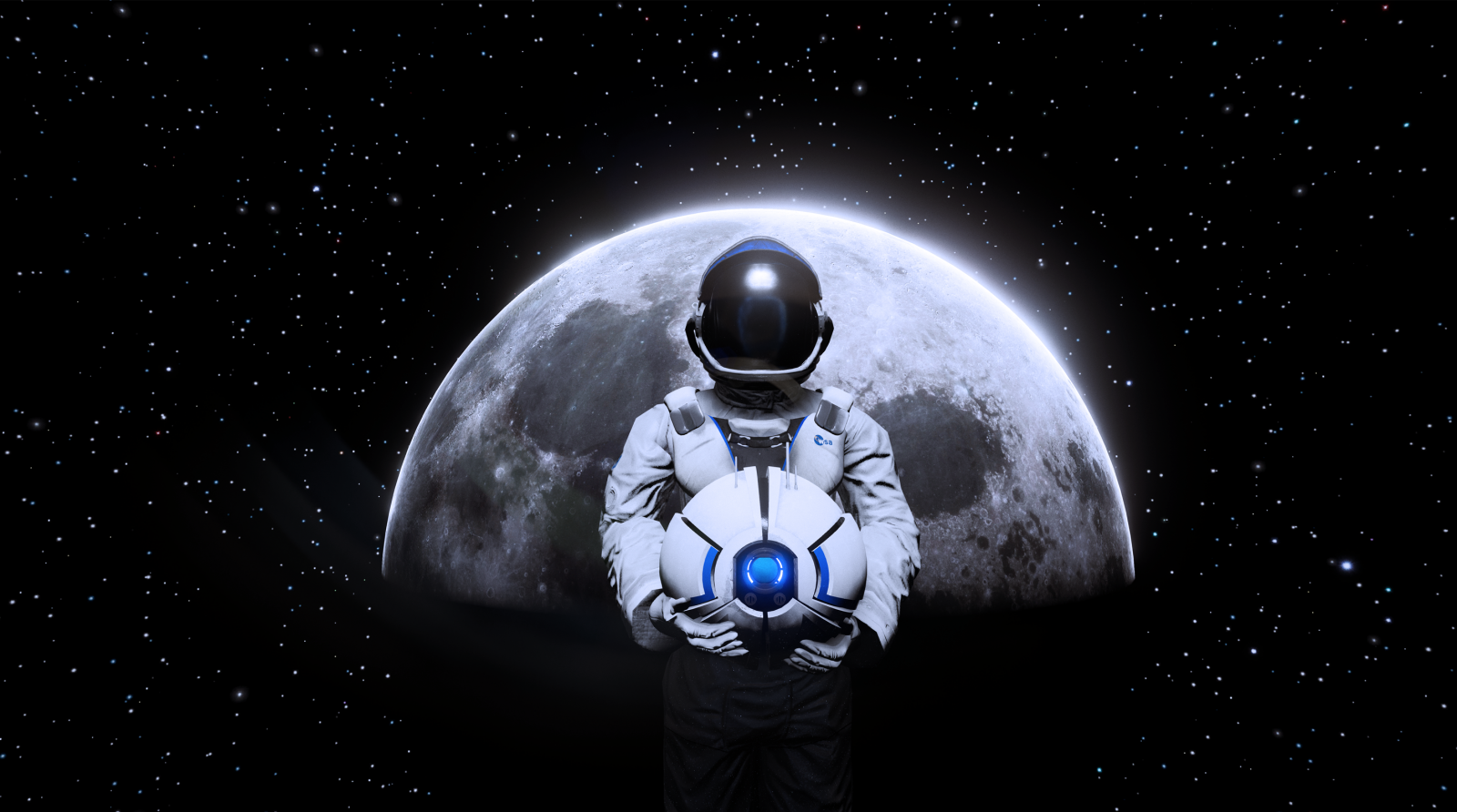 Have you ever thought about what would happen if we ran out of Earth’s natural resources? If we no longer had the resources to fuel our cars, to heat our homes, or cook our food – what would you do? What would humanity do? Deliver Us The Moon drops you into the shoes of a scientist that is tasked with discovering how and why communications and the transmitting of resources from the Moon have stopped. But before I get ahead of myself, let me catch you up on this enthralling story.

Like our real, present day dilemma but much worse, in the year 2030, Earth’s natural resources have been depleted. Needing to find resources to keep humanity alive, the world’s super powers came together to form the World Space Agency to look for resources on the Moon. In a short two years, the WSA had colonized the Moon and discovered a resource called Helium 3. With this resource in abundance, they knew they had taken humanity off life support and gave them a new lease on life. The remaining scientist constructed a device called the Microwave Power Transmitter (MPT), and with it, they were able to deliver the Helium 3 resource directly to Earth – but all was not so simple. Two years later, contact with the team on the Moon went offline, as well as the MPT, and Earth went dark once again. Over the next few years, a few remaining WSA scientists on Earth worked to develop a space shuttle to get back to the Moon and re-establish connection with the MPT and discover what happened to the colony. 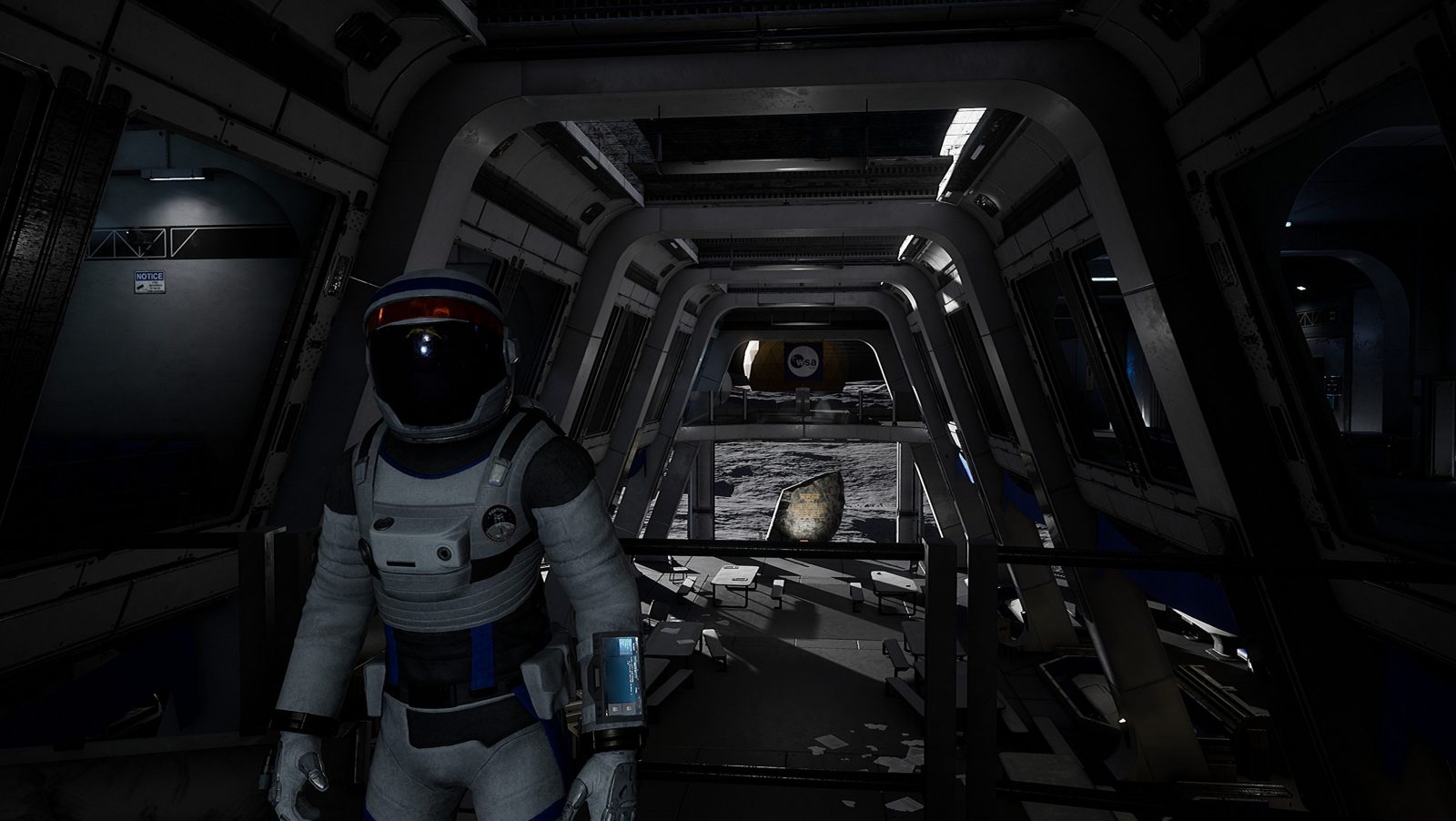 A cold and desolate world

With the premise of this game being familiar and realistic, it drives home how precious Earth is. Though it’s not a horror game, it treads lightly on feeling like a Dead Space spinoff, without death lurking around every corner. From the initial cutscene, I got the feeling that this game would play more like an interactive film and not just a game. Deliver Us The Moon is an exploration game where you are at the center of restoring hope to humanity. As I began my gameplay, it was apparent that KeokeN Interactive, the developer, had spent hours studying what it would be like to alone on a barren world. As I put on my space suit and took my first steps into the dismal desert world that was Earth, my initial feeling was of distress and confinement. As I explored the area for clues as to how to get the space shuttle powered up, the feeling of claustrophobia and self-awareness set in. The Earth was cold and almost alien. Nothing felt familiar. This was further intensified as I moved in and out of small laboratories and stations because the camera changes from third-person to first-person, changing how I perceived physical space and increasing the eeriness of the world. There are only a few horror games that have made the hairs on my arms stand on end, but with this not being a horror game, I was blown away at how the developers used audio and visual cues to alter my state of mind.

While searching the desolate areas, I came across items that clued me in on the lives of the scientist and inhabitants of the WSA station before the MPT went offline and sent Earth back into the dark ages. Finding pictures, books, and other personal items will key you in on parts of the story that are outside of the main objective and help you figure out puzzles that hinder your progress. After getting the space station’s systems back online and the necessary parts for my space shuttle, I strapped myself into the driver’s seat of the shuttle, ready to deliver the Moon to save humanity. This is where I believe Deliver Us The Moon shines. Instead of a cutscene showing the shuttle coming to life and blasting off, you work with the small team that remains alive to go through the systems to fire up the space shuttle. As my fellow scientist talked me through the shuttle’s systems, tension mounted as everything was a timed event. Much like a real space shuttle, it takes more than a pair of hands to operate it. Flip a few switches in a specific order to boot the systems, retract the orbital arm in an optimal range, and toggle the auxiliary power units are just some of the actions needing to be completed before blasting off. I don’t have to tell you what happens if you fail to do so, a few tons of rocket fuel will do that. 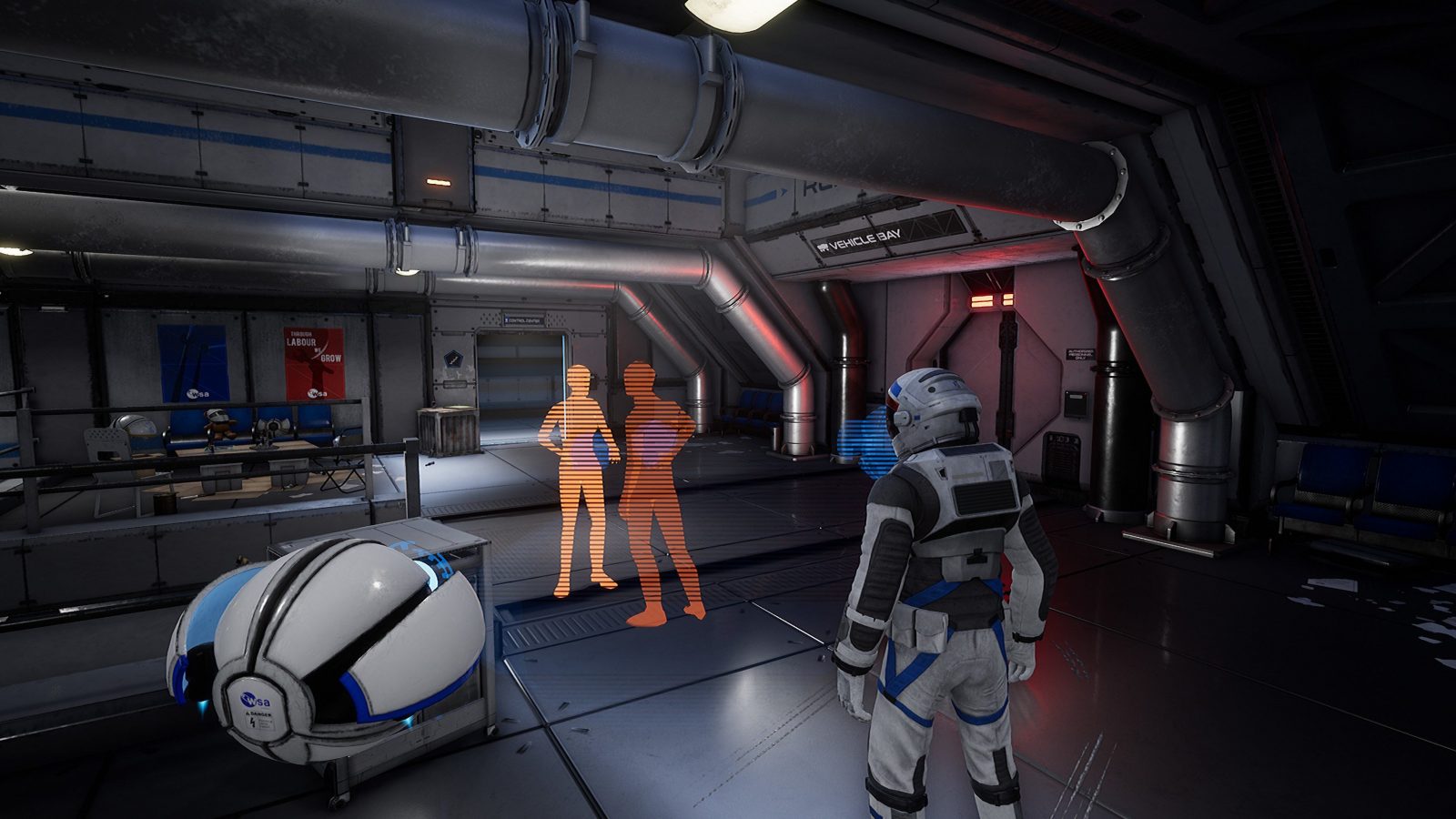 Standing on the shoulders of those who came before you

After blasting off into space, it’s up to you to dock with the space station above Earth. Like before, the developers put you in control of making the necessary docking procedures: come in too fast and you’ll crash, take your time and make subtle adjustments and you’ll nail it perfectly. If you need a visual aid, think of the movie Apollo 13 when the crew had to keep the view of Earth within view of a small port window as they attempted to return to Earth. After docking with the space station, the gameplay took on an interesting and much expected change.  Because the space station had lost power, there was no oxygen or gravity. With my oxygen life support system dwindling and me floating like a helium-filled balloon, my main objective was to get power back to the station and get the life support systems back online. Much of the tasks in the game are simple and don’t take much thought. Need more oxygen, there’s plenty floating around in the area. It’s that easy. After finding the power modules and getting the life support systems back online, it was clear that the game’s puzzles aren’t made to make you think, just to give the game some depth – and it’s a bit unfortunate. Because many of us will never see the inside of a space station, I felt the developers could have used this against the player and made the puzzles more interesting.

As the game progresses, it continues to deliver on its ability to make the player feel that they are on a mission to save something bigger than them, all while being in the void of space. Some areas take on platforming characteristics, making you jump from platform to platform to reach your destination. Thinking that the game would incorporate more interactions and less fetch quests, I was wrong in that assumption. Further progression in the game continues with the same formula of story over gameplay. The rest of my time with the game was left completing fetch quests, and there’s nothing wrong with that, but the level of challenge never increased as I progressed. With the game being roughly 3 ½ hours long, there wasn’t much time to incorporate much else. At no point did I feel the developers were putting me in a cold and deadly scenario that space would put an inexperienced earthling in. It was just a feeling. 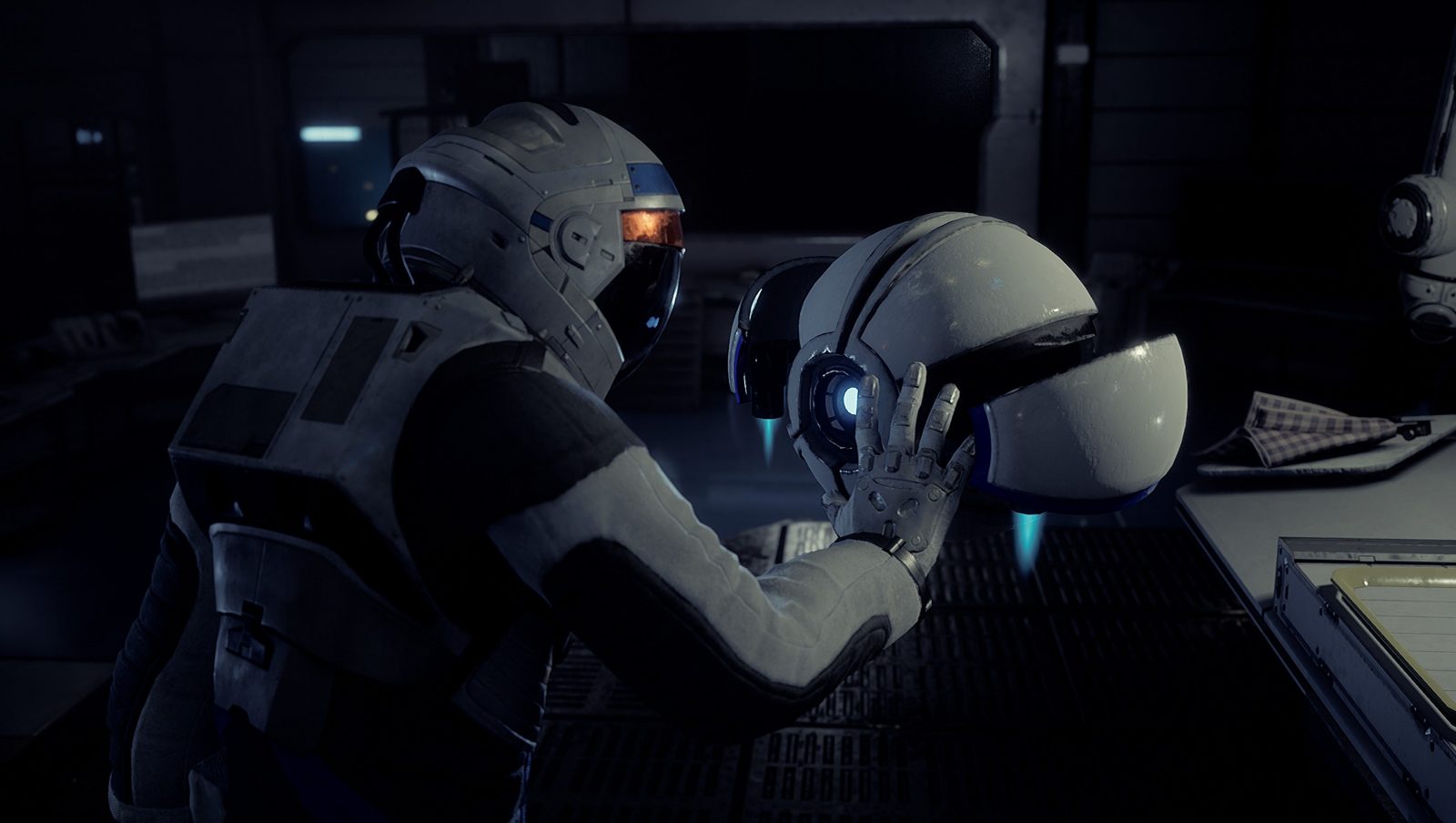 A light in the darkness

All was not perfect with the gameplay and story. The game suffers from constant stutters and dropped frames throughout the entirety of the game. With my PC being well above the recommended specs, even with an added overclock, the game continued to chug along like a car running out of fuel. How ironic. The controls feel like you’re dredging through a sea of sludge. Not that they’re bad or not configured well, just that the character movement animations need to be reworked. When performing some of the game’s platforming tasks, I was never confident in where I’d land or stop when jumping – in or out of gravity. I won’t spoil the ending, but much like a movie, there’s an abrupt cliffhanger.

Deliver Us The Moon: Fortuna

When you think of this game as an interactive, cinematic game, you can look past many of the shortcoming of this 3 ½ hour game. It teeters on wanting to focus only on a story while trying to maintain an interactive experience. The eerie feeling that the game creates is masterful, and its ability to make you feel like you’re experiencing the world is better than most triple-A experiences. With a possible DLC in the works to explain the abrupt ending, maybe the developers can master the balance.

T.K. is a freelance writer, narrative designer, and author. Writing and developing narratives and giving voices to digital world and characters is his passion. As a game writer, QA game analyst, and editor for Gaming Trend, he enjoys being a part of the gaming industry.
Related Articles: Deliver Us The Moon: Fortuna, Indies
Share
Tweet
Share
Submit