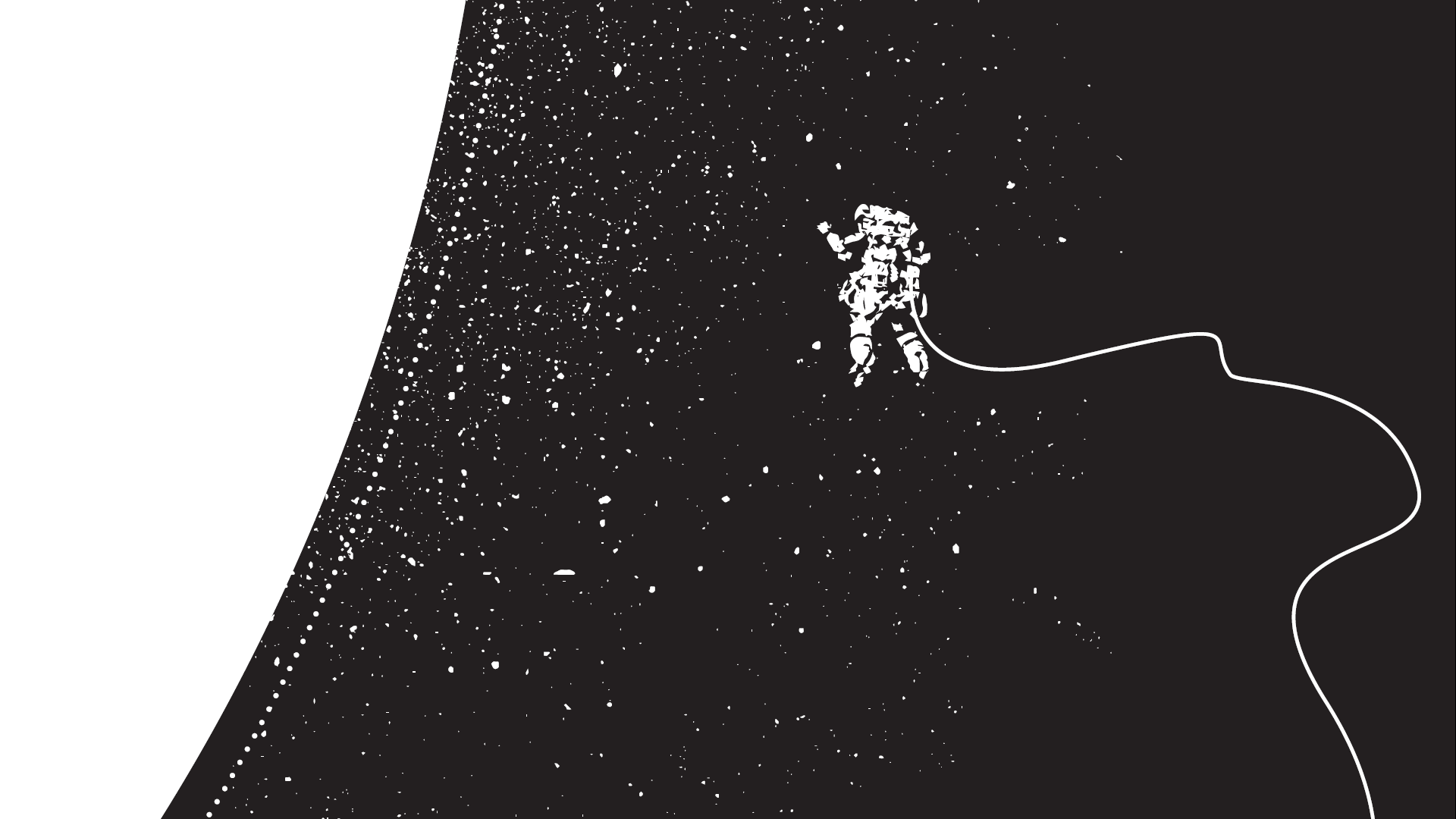 Fear, hunger, and peril await those who tarry in the dying universe of Death in Space. Dripping with all the atmosphere that its characters desperately lack, this game sets as the cosmic crunch pulls everything towards its end, the dark force of the Void emerges to corrupt the remnants of life. Superstition and paranoia propagate after a war over resources shattered galactic civilization. Static buzzes in electronics, some say forming words the further one travels from known space. Your characters will be scroungers, eking out a living on the edge with whatever scraps and small jobs they can get their hands on.

Coming from the same team as Mork Borg, the two share much in the way of graphic presentation and mechanical design. The greatest point of divergence is that Death in Space seems to have been designed to feel like a more complete game out of the gate. Mork Borg’s core book was certainly great on its own, but it was also clearly designed as a starting point for content to come from its creators and community. Death in Space is just as easy to learn and reference, but feels like more of a self-contained package. To that end, this space survival simulator doesn’t completely deliver, but it does provide a thematic and evocative game for down on their luck spacers just the same. 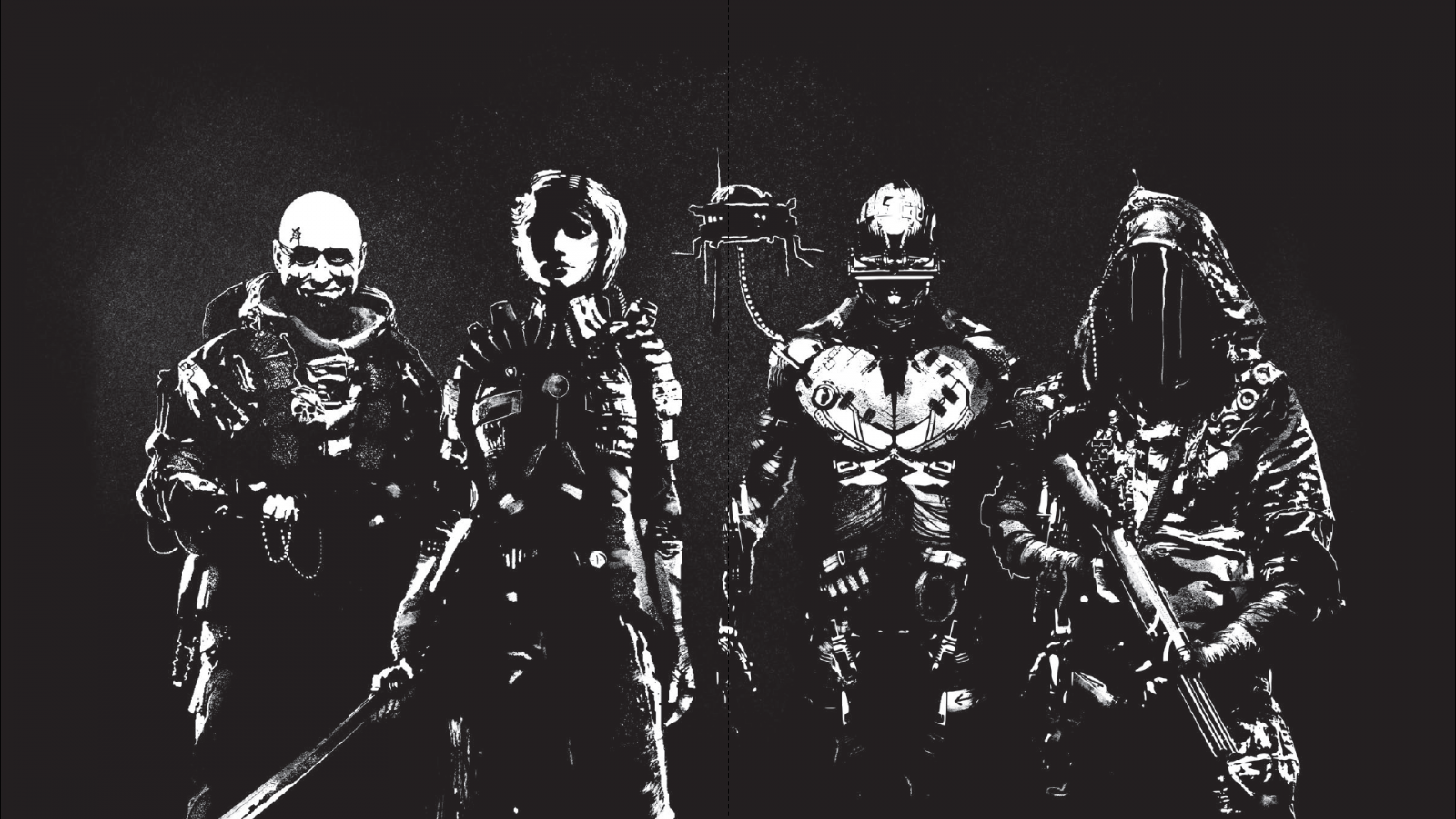 The core book is 136 pages in PDF. It doesn’t contain an index; I usually ding points for lacking one, but this book is so navigable and the cheat sheets on its inside covers so complete that I honestly didn’t even find it necessary. Just like in Mork Borg, rules flow logically and almost never cover more than a two-page spread for a given topic. There is little empty space, what is there used for its grimy industrial tech-inspired art. There is some occasionally wasted space, but the game’s focus on making you feel alone in the void, and the obvious utility of spacing rules out for easy navigation, make this a negligible issue. Whether it’s making a character, learning the rules for trawling space, or generating random spaceships/stations, you will find Death in Space a friendly introduction, however horrific the gameplay purports to be. Some depth is lost in the approachability, especially when it comes to character advancement and ship building.

Your character will have four attributes between Body, Dexterity, Savvy, and Technology, obtained by rolling 2d4 and subtracting the second die from the first. At first level, characters’ hit points are 1d8, not modified by any attributes. Starting gear is also random, unless your GM chooses otherwise. You then pick or roll an origin, which provides a benefit and drawback, as well as optional tables for background, appearance, character traits, goals, and former allegiances. The game’s rules also cover a lot of ground, allowing you to incorporate survival, encumbrance, reactions, breaking and fixing equipment, space combat, and more in its core book. 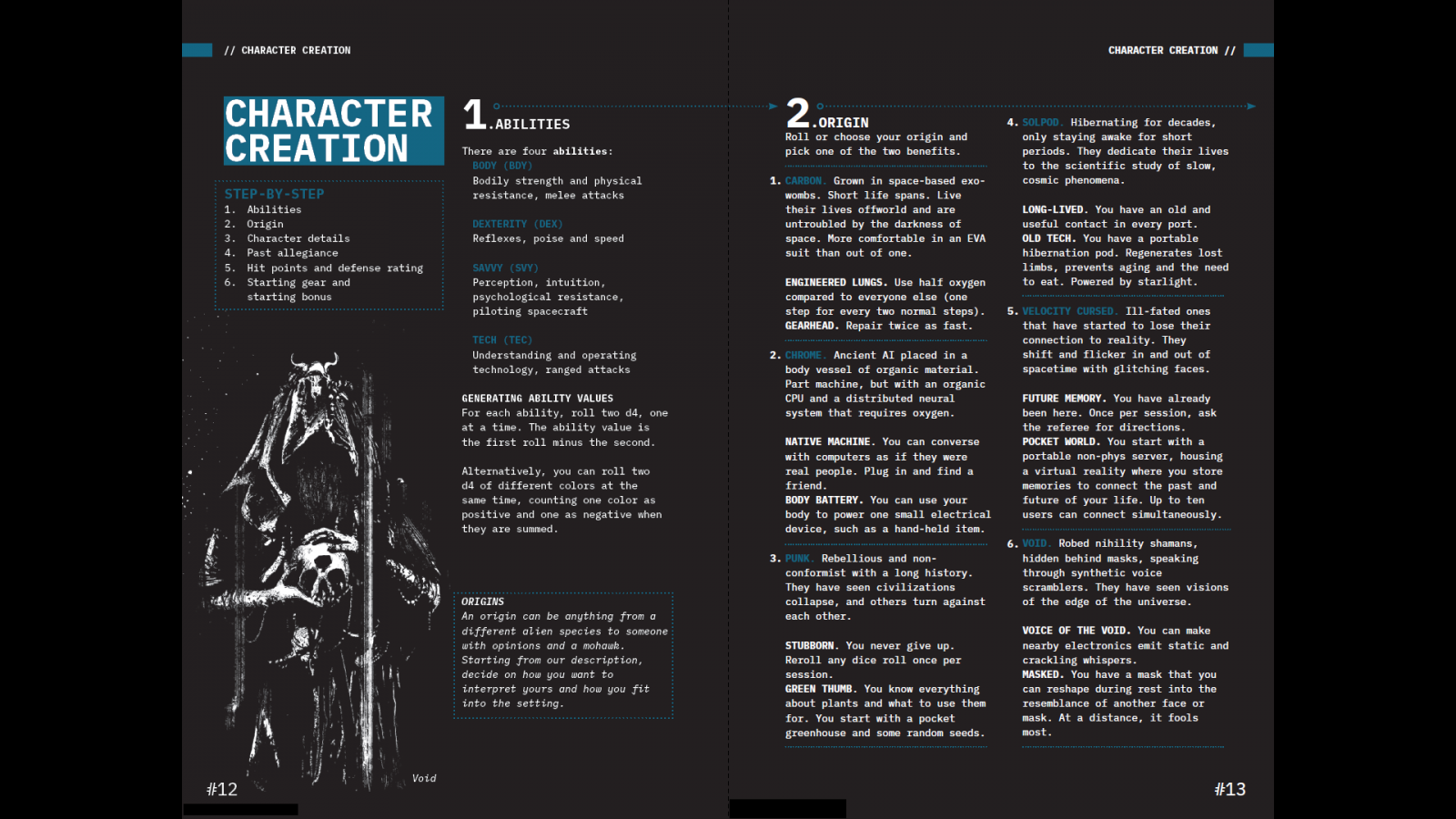 Dice rolls consist of rolling 1d20 and adding or subtracting the relevant attribute. Death in Space has taken the advantage/disadvantage mechanic from D&D 5E, allowing you to roll two d20 and take the better or worse result, depending on whether the situation weighs in or against your favor. Apart from being a general mechanic to change the likelihood of success, this doesn’t come into play in any other mechanics or character abilities. Combat remains nearly identical to Mork Borg, but for the addition of Reckless Attack as an option to make for more choices in-game. It feels like the advantage/disadvantage system was put in place to encourage creativity in gameplay that doesn’t require a lengthy addition of situational bonuses or character options.

Among the dangers of the Tenebrous Systems is the ever-present threat of Void corruption. For every failed roll, your characters will gain a Void Point up to a maximum of four. This is a subtle way to encourage GMs to only call for tolls that have genuine narrative weight, negating unnecessary dice rolling for basic tasks by adding a new weight to success or failure. You can use a Void Point to gain advantage on an action or activate a mutation. However, if you use a Void Point to gain advantage and fail the roll, you may gain corruption from the malign influences of space. These corruptions, as strange and horrific as they are, aren’t anywhere near as hostile to the player as similar upgrades from Mork Borg. You don’t really get worse as the void corrupts you; you just get stranger, more like the alien creatures starting to filter into human space. Whether this is a good decision depends on whether you would prefer that corruption build over time. I personally would, as it would add to the threat of this slow-burn survival simulator and make corruption more worth avoiding. On the other hand, Death in Space is much less of a violent meat grinder than Mork Borg is purported to be. (It isn’t actually, as anyone else who has actually played the game can attest to, but that’s a discussion for elsewhere.)

If there’s anything that does feel distinctly lacking here, it’s in the space combat rules. In principle, there is a lot to like. Distance is broken into range bands so that you don’t have to worry about hexes, and the overall complexity of combat is limited. You will find or construct modules to supplement your ship’s abilities, and building out your habitat over time is a major portion of the game. That said, the space combat rules have precious little for anyone other than the pilot character to actually do. Some modules allow for other options, but for the most part space combat consists of a few rolls between the GM and one person. 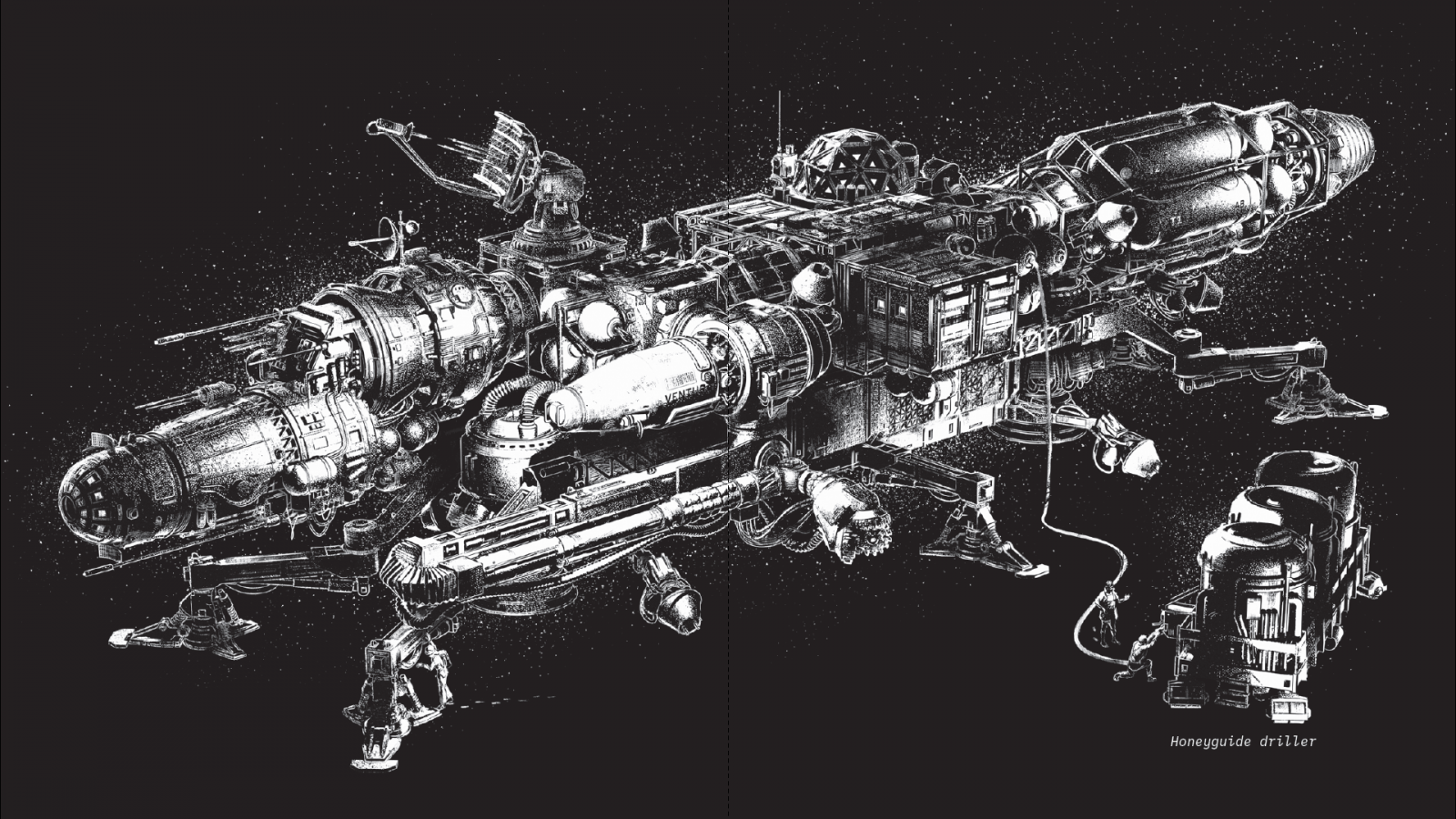 The core book also contains a concise but evocative discussion of this setting, which is human-focused and deals with alien life mostly as a rare and hostile force. It also contains a starter adventure with a main space station hub and, as expected, a great presentation. Within two paragraphs you will understand where you are, the major conflict at play, and the capabilities of its combatants. Wizards of the Coast should be ashamed of itself reading this. Imagine, an adventure where you can get up to speed without spending a dozen hours making your own notes and deciphering unreadable maps. Rounding everything out are random tables for damn near everything you could want: locations, spaceships, enemies, traps, enemy crews, and NPCs. None of these have a huge variety, which feels strange for a game that is designed to take place over time, but there is still plenty for you to chew through to get started. As long as your players aren’t reading this book, there is more than enough to keep them entertained for a single campaign.

Now comes the point where I address the Mothership in the room, the other gritty independent OSR-inspired space RPG. Is there a reason for both to exist? Absolutely, because they achieve highly divergent goals, however similar they appear. Mothership is all about situational horror, whereas Death in Space focuses on long-term survival. Death in Space doesn’t have fear or sanity rules, the defining features of Mothership. Compared to something like Stars Without number, Death in Space has nothing on the amount of content or completeness, but time will tell how the community responds to and supplements this product.

Death in Space takes Mork Borg’s basic engines and sensibilities into the dark of a galaxy at the end of its life. Rife with all of the horror and graphic design of its predecessor, Death in Space lacks in a few areas but maintains exceptional focus and ease of use. For anyone looking for something with the same weight to it who doesn’t want to learn more rules, Death in Space admirably expands the brand into the horrific wonder of the stars.

John Farrell is a legal aid attorney specializing in domestic violence, living in West Chester Pennsylvania. You can listen to him travel the weird west as Carrie A. Nation in the Joker's Wild podcast at: https://jokerswildpodcast.weebly.com/
Related Articles: Death in Space, Tabletop
Share
Tweet
Share
Submit