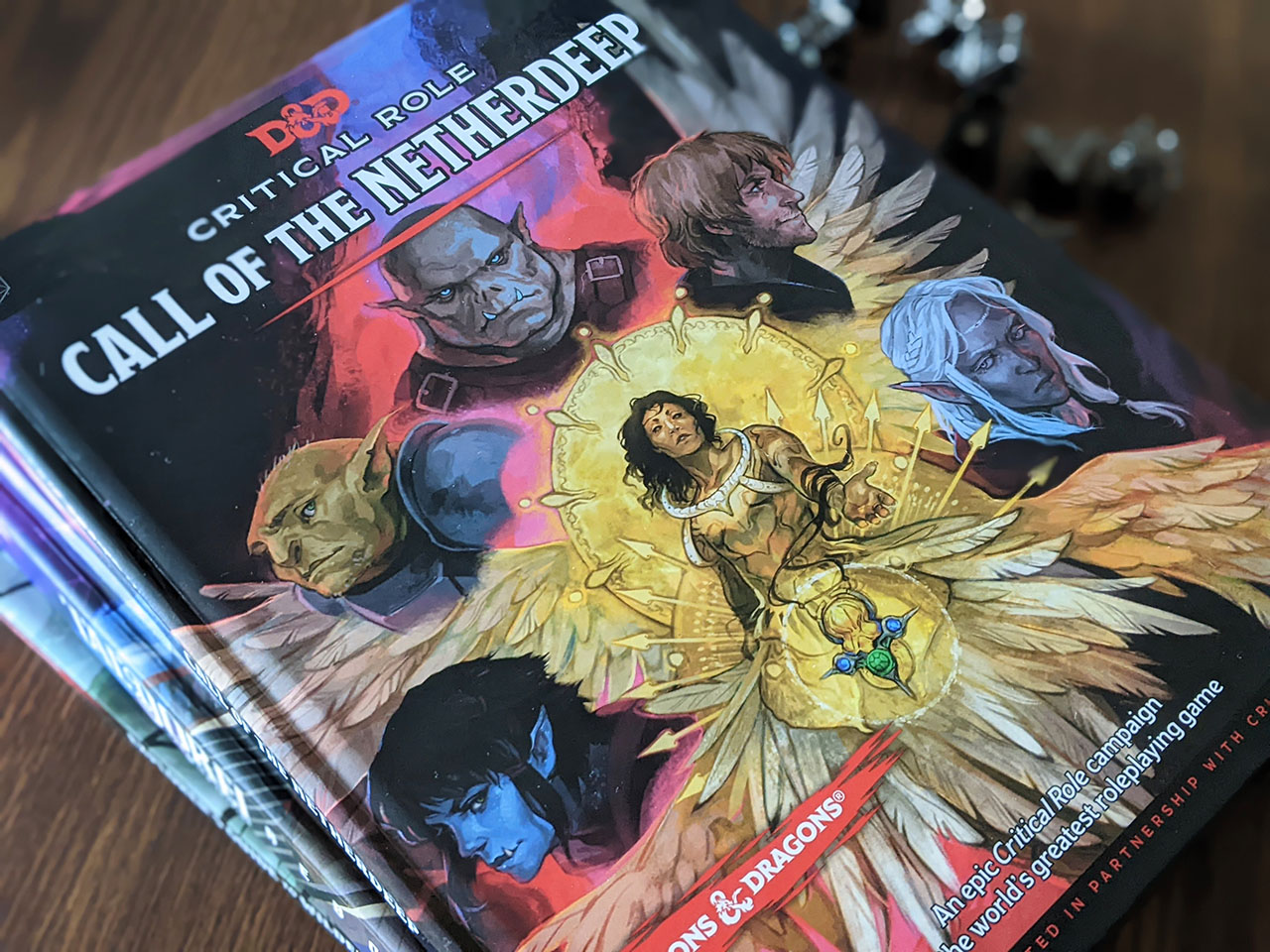 If I can say any one thing about Critical Role: Call of the Netherdeep it’s that it feels like a Critical Role adventure down to its bones. The world is large, the non-playable characters are truly at the heart of this adventure, and the story itself is full of bright highlights, dark shadows, and thoughtful, challenging questions around blessings, sacrifice, and what it means to be a hero. It’s a well-crafted adventure with plenty of room for players to explore, though it is perhaps not one suited for every table or dungeon master. 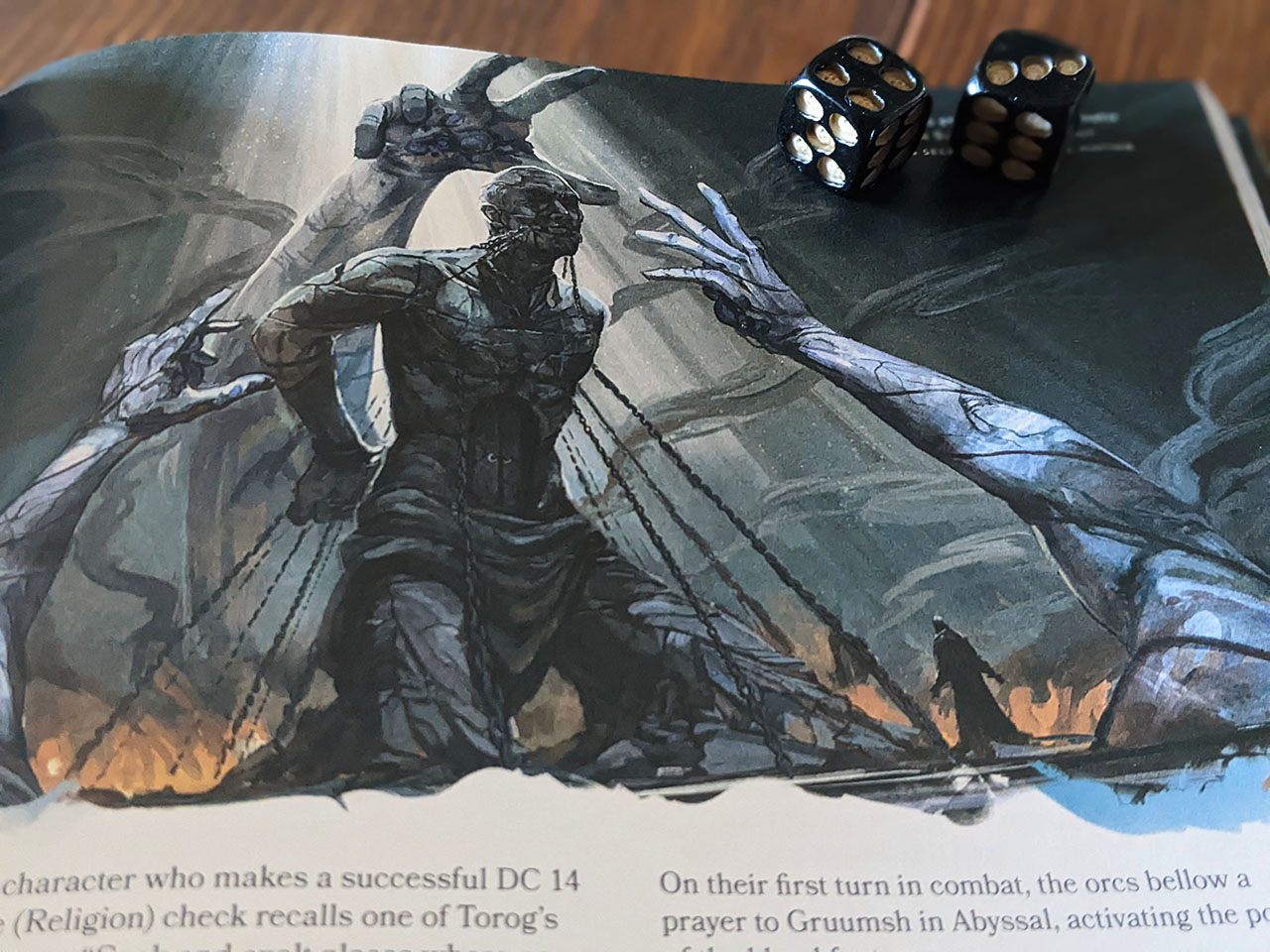 First off, the book itself is everything you’d expect from a D&D book. Unlike Tal’Dorei Campaign Setting Reborn, Call of the Netherdeep is neither oversized nor printed on higher quality paper. Please note that this is an observation, not an insult. Quality-wise, it is directly in line with the core D&D books, as well as the Explorer’s Guide to Wildemount. It comes in at 224 pages, including 24 pages of creatures and rivals, a handful of pages detailing magical items, four pages of concept art for the adventure, and a tear-out map of Ank’Harel. The book itself has a scattering of solid battle maps where they make sense, and plenty of art. The art itself is beautiful, though the style of some of the character art feels just different enough to be a touch distracting. Set Piece illustrations are truly stunning, and I’ve found myself distracted and staring at them on more than one occasion.

This is a campaign book, and so it, unsurprisingly, does not contain any new subclasses, feats, etc, and only a handful of new magical items. It is, however, steeped in Exandrian lore, focusing heavily on Ruidus, Exandria’s ominous, small, red-glowing moon. A new kind of element has suddenly emerged in the world, and has been named ruidium because its color resembles the aforementioned moon. The party will find themselves tangled up with several opposing forces which all seek ruidium for their own reasons, unaware of the suffering associated with the source of this strange element. 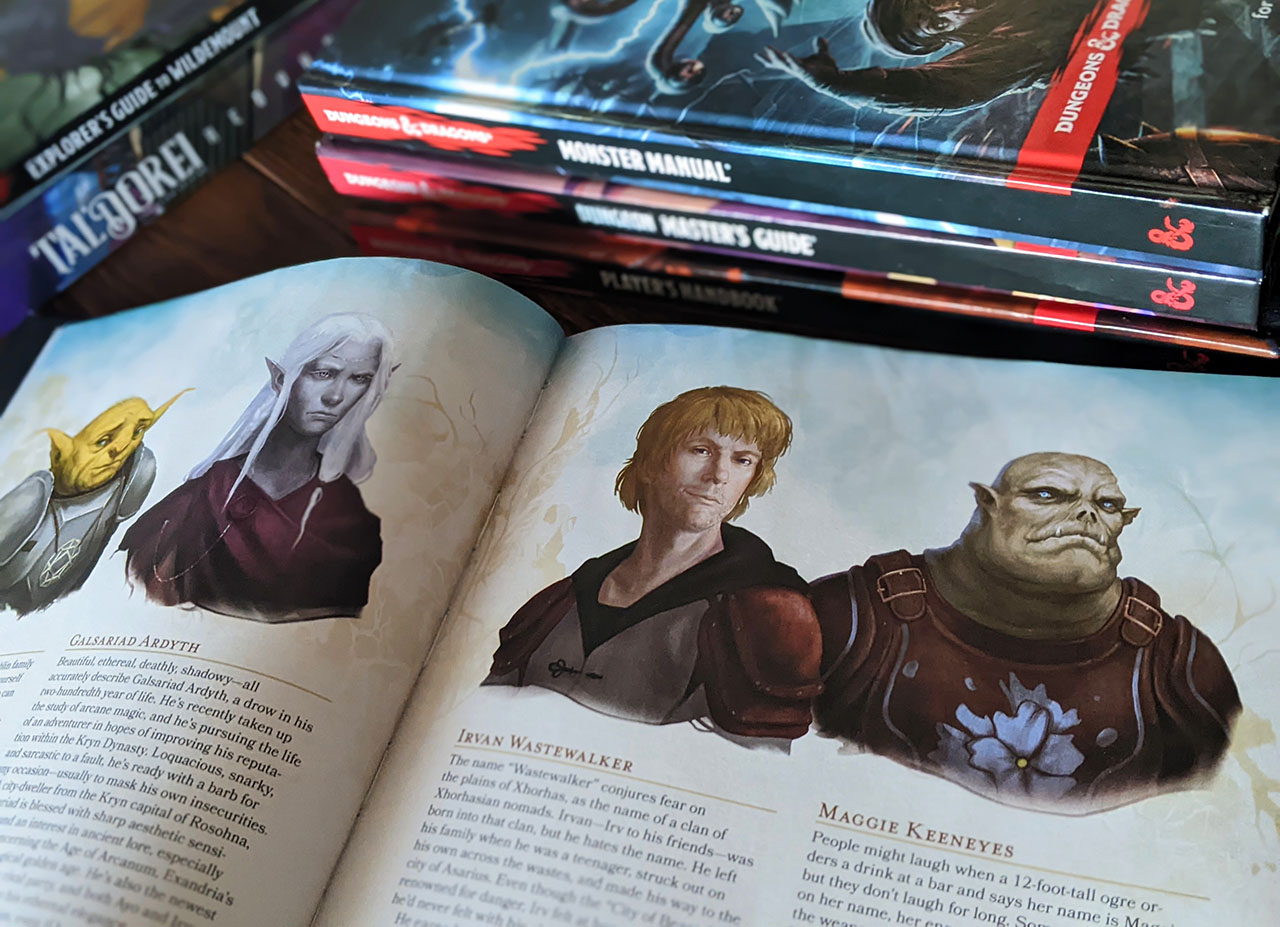 Call of the Netherdeep has an interesting approach to its story which pits the player characters against a rival group of adventurers with the same goal from the very start. As mentioned earlier, this may not be a game for every DM, as so much of the impact of this story revolves around the party befriending or making enemies of their rivals, and witnessing how their shared quest changes these NPCs. Each character is mapped out, with a clear personality, individual goals and aspirations, hardships they will face – some they encounter because of the player party, while others are simply inevitable. 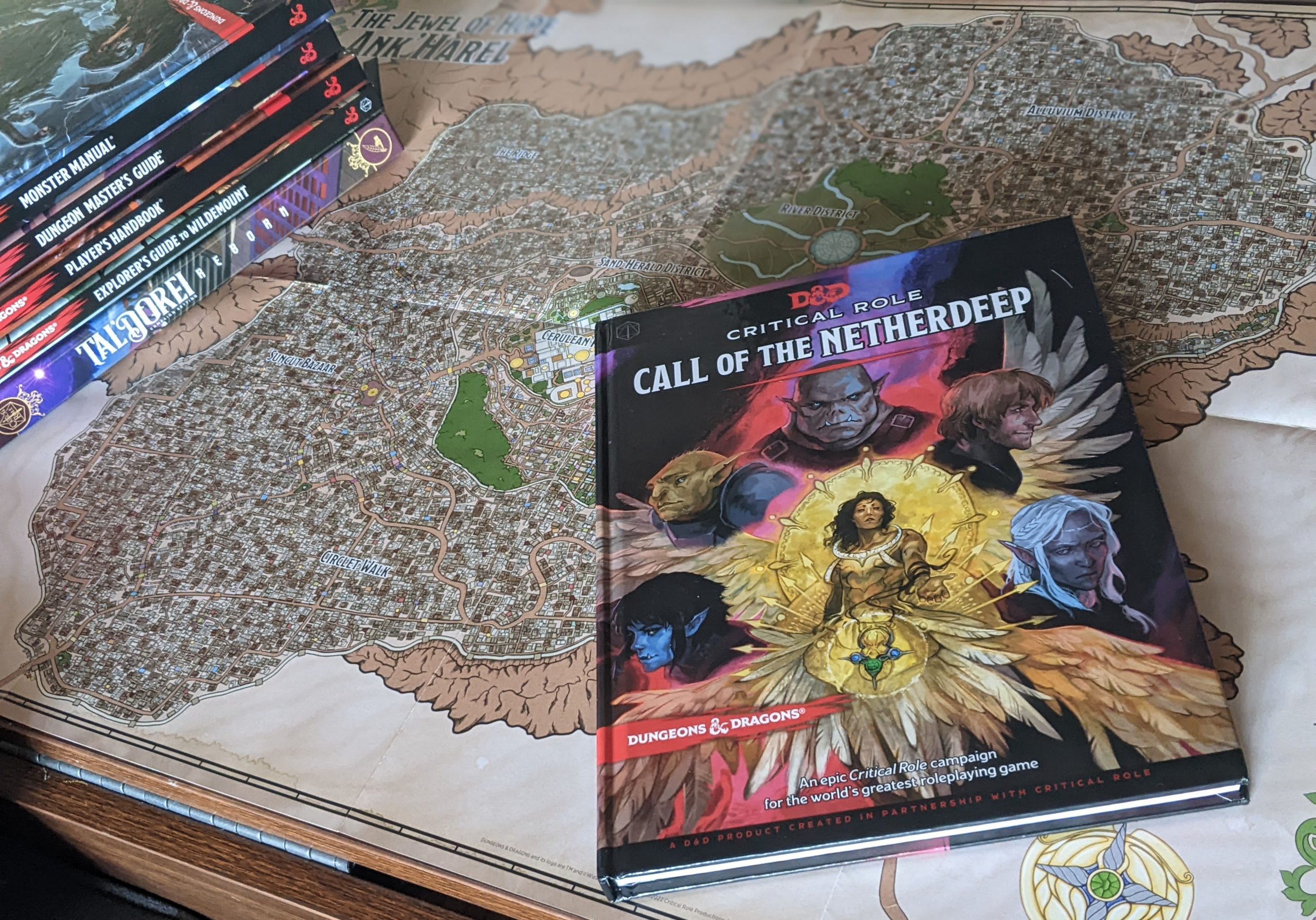 One mechanic which I found incredibly exciting to think about is found quite early on in the adventure, when player actions can actually make the rival party the called-upon heroes of the story. If this scenario is triggered, the players will either have to find enough humility to accept fate and aid the rivals in their quest or resort to deception or even theft to force their way into the heroic spotlight. There’s plenty of time for back-and-forth across the span of this adventure, and not every member of the rival party will feel the same way about the players. The book is filled with prompts of how and when the two parties can meet up, how individual members might reach out privately, should they decide they like one or more members of the player party, and ideas on how to make friends (or life-long enemies) of the rivals.

Before going further, I will address the elephant in the room: Ayo Jabe, the rival party’s leader who boasts blue skin and small tusks has no relation to Jester and Fjord from Campaign 2. While a clever dungeon master could change her from a water genasi to a half telifing half-orc (Orcling? Tieforc? I’m personally fond of tieforc), she has no relation to the Nighty Nein in the adventure as written. Sorry, Critters, but I am happy to announce that there are a number of familiar places and faces for you to find in this adventure. 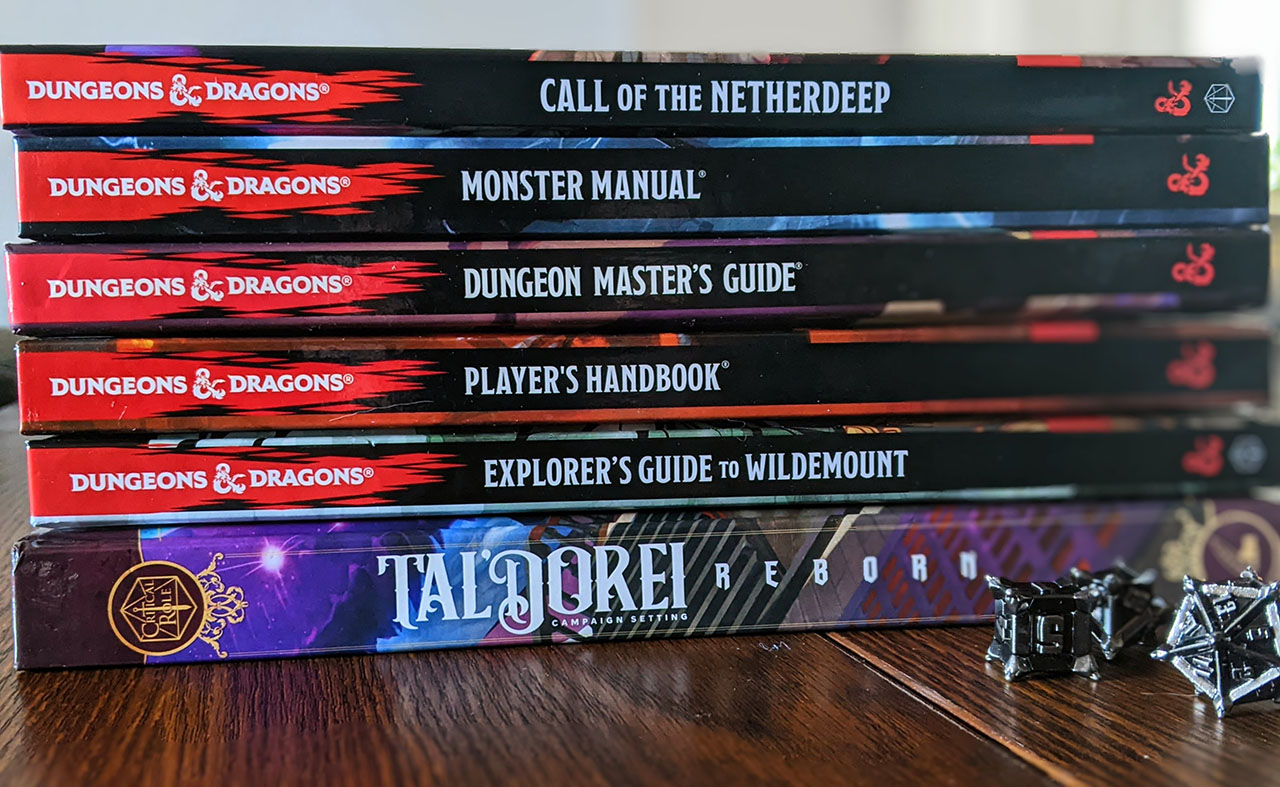 In addition to the Call of the Netherdeep book itself, running this adventure will require you to reference the fifth edition Player’s Handbook, Monster Manual, as well as the Dungeon Master’s Guide. There are some optional references to The Explorer’s Guide to Wildemount, and there are no references to Tal’Dorei Campaign Setting Reborn. The adventure itself will take characters from levels 3 to 12, and suggests that parties who want to start at level 1 begin with the “Unwelcome Spirits” adventure in Explorer’s Guide to Wildemount.

The book itself is incredibly easy to navigate, with flowcharts, chapter breakdowns, and clear guidance where needed. It also has a nice pacing, and the module itself provides plenty of time for players to explore each area, as the main story quests come in chunks with built-in breaks where the party can take time to meet NPCs, hunt for clues about their Vestige of Divergence, and of course, do some all-important shopping. It also provides options based off of what kind of party you find at your table; there are tips for how to help move distracted players through the story, opportunities to meet up with the rival party, and even has options for how to let a determined group skip some of the faction sections, should they want to dive directly into solving the mystery at the heart of the Netherdeep. 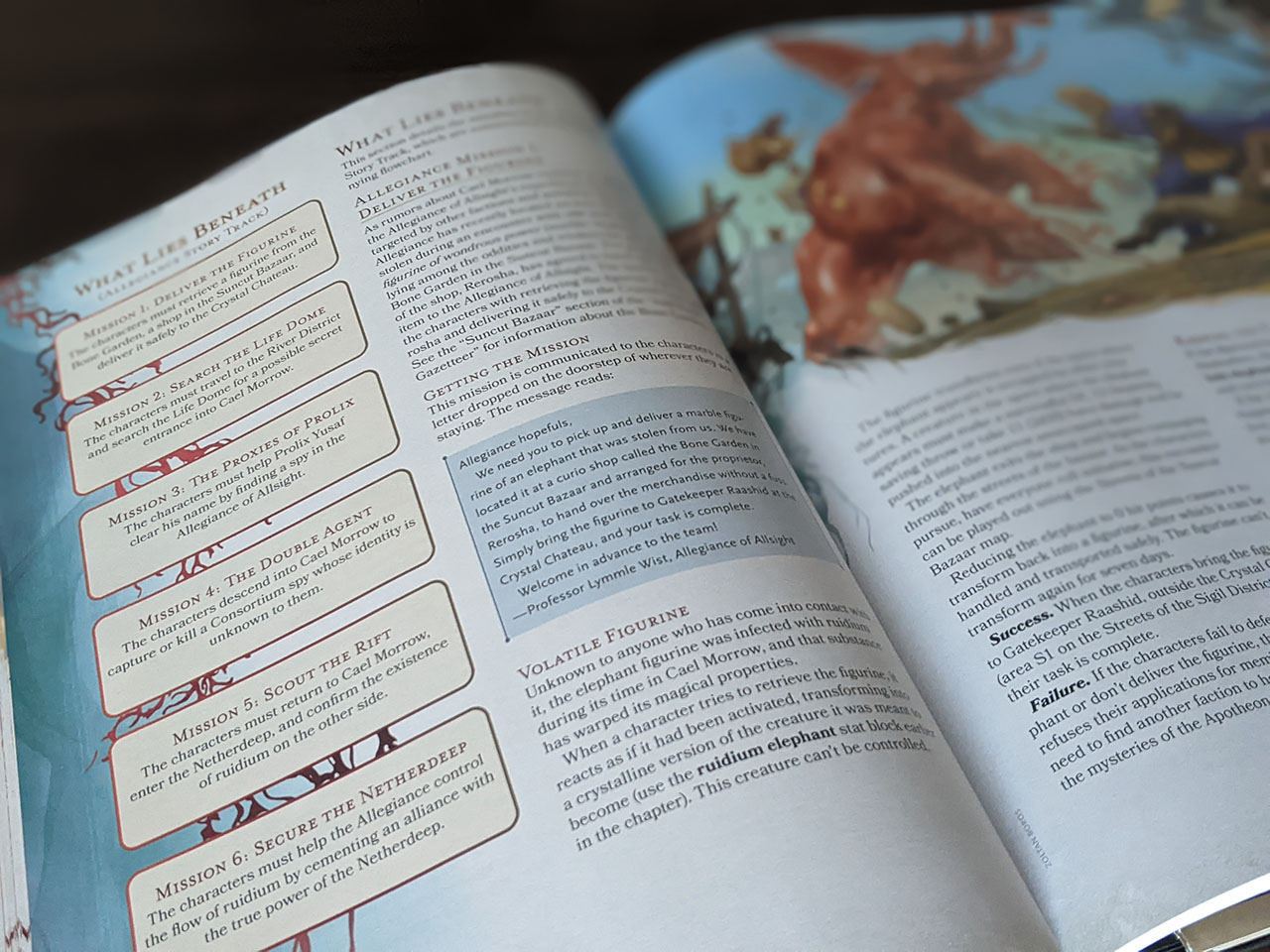 Large sections of this module revolve around aquatic fighting, so DMs will need to read up on and remind players of the rules around underwater combat. There are plenty of magic items and potions available to characters who have the unfortunate need to breathe air, so there’s no need to build a specialized party. That said, the campaign does begin in Xhorhas, so be ready to encourage your party to pick some unusual races, including goblins and other monstrous folk. Many of the new monsters in this book are aquatic which makes this an excellent resource for anyone looking to beef up their creature roster for underwater encounters. In fact, as soon as you open the page you are greed by a Corrupted Giant Shark, and it really does set the tone for how this module is going to run.

The heart of the story of Call of the Netherdeep questions what it means to be a hero, what it means to sacrifice, and what that sacrifice actually costs a person, especially over time. I’m going to pick my words carefully here, as uncovering the mystery at the heart of the Netherdeep is a huge part of this adventure and I do not want to risk spoiling it. The player and the rival parties are not the only heroes who suffer in this story, and a DM hoping to run this module will find much more success if they’re able to understand and express the ways in which suffering, loss, and despair can change a person, and how those changes can present themselves. Corruption is also a major and running theme for this game, both mental and physical. Players and NPCs will experience rashes, pustules, and unnatural growths throughout the course of the campaign so this is something that will be important to check in about during a zero session. 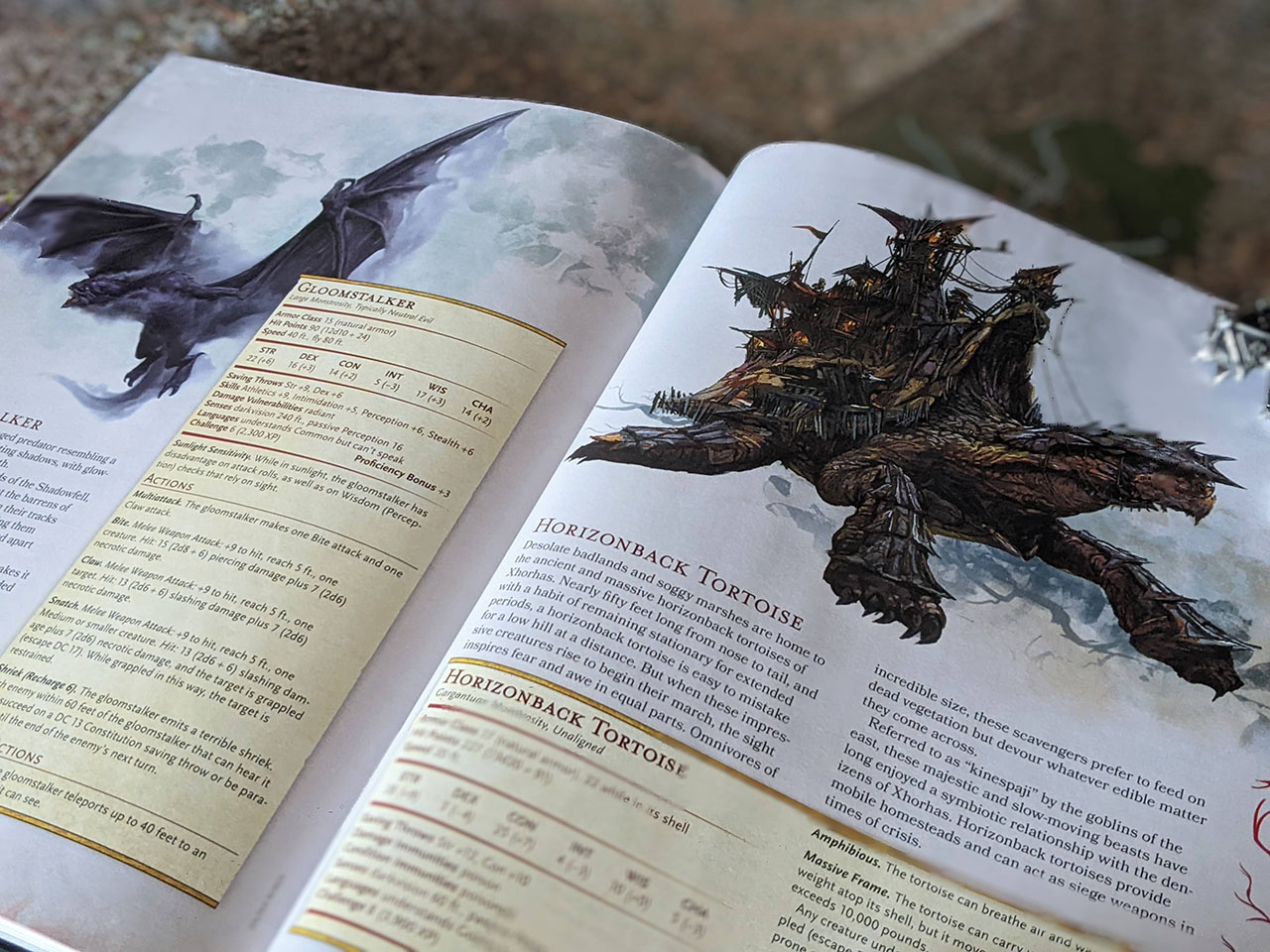 I have to admit that I’m impressed by the number of branching paths and options presented in Call of the Netherdeep. The party’s choices will have a real, resonating impact on NPCs, rival party members, and the world at large starting from very early on in the campaign. Perhaps most exciting is the amount of gray area, differing opinions, and fragmented lore from the days of the Calamity which means that, as the players approach the end of the module, the question won’t necessarily be if they will do the right thing, but if they will even know what the right thing is. In my opinion, that’s exactly what a Critical Role adventure should feel like.

Critical Role: Call of the Netherdeep

Critical Role: Call of the Netherdeep is an emotional, layered, melancholy, exciting story which pits the players against an NPC rival party with the same goal. More than just a race to save the day, this adventure takes the time to really look at the toll that sacrifice and heroism can take on a soul. With mysteries to unravel, familiar faces and locations to find, superstitions to explore, and a whole new story which echoes back to the days of the Calamity, Call of the Netherdeep is everything you’d expect from a Critical Role adventure.