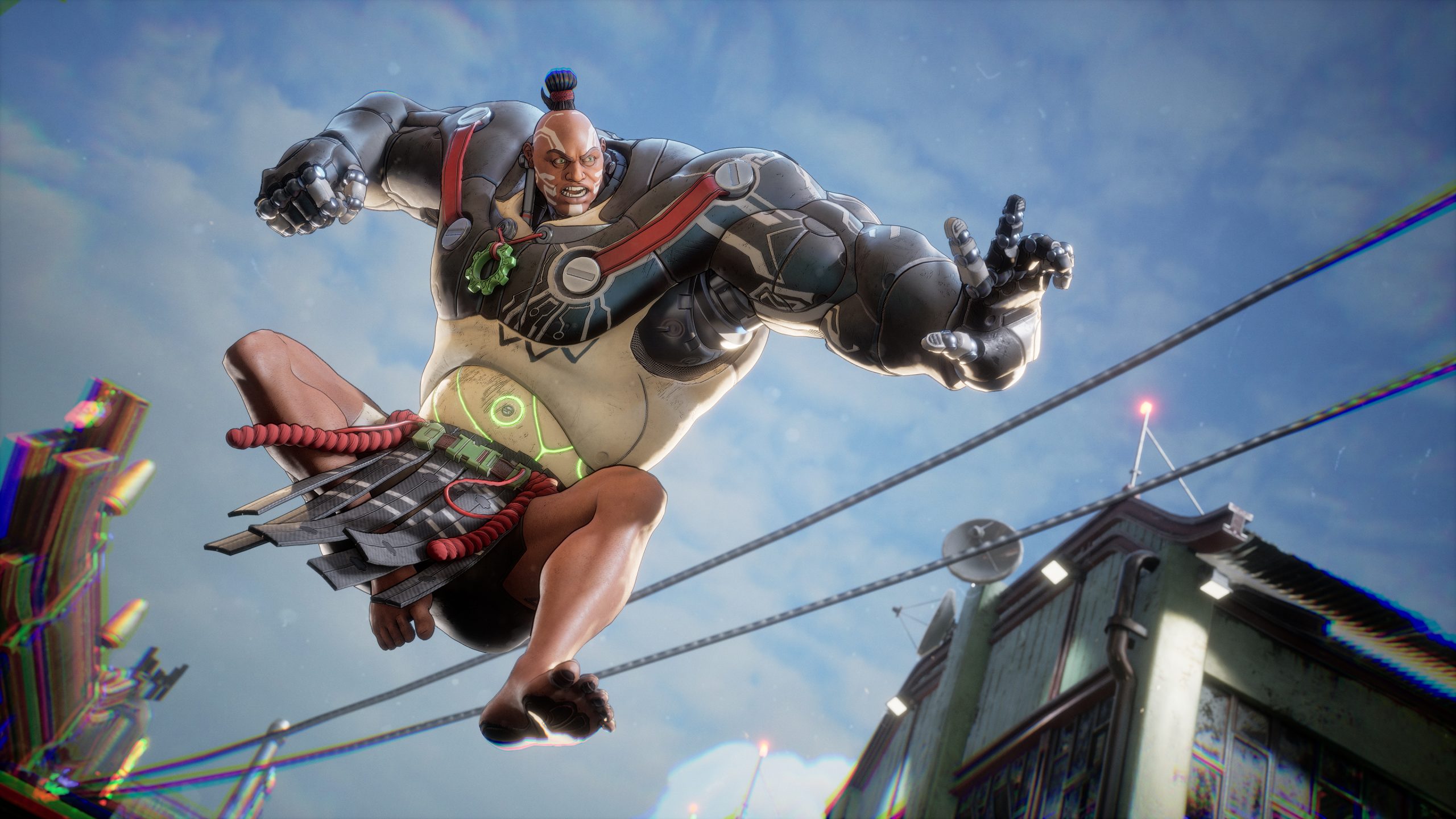 As someone who would die on the hill that DMC: Devil May Cry is the best Devil May Cry game, I could not be more happy to see Ninja Theory returning to its brawler roots with Bleeding Edge, a self-proclaimed “hero brawler” that pits a diverse cast of characters against one another in melee-focused combat. It’s a novel concept: take the beloved and growing hero shooter genre and reimagine it as a close-quarters fighting game with class-based roles and unique abilities. While there isn’t a lot of Bleeding Edge content to enjoy at the time of launch, what’s there so far has completely knocked my socks off.

At the heart of Bleeding Edge is its memorable and freakish characters. There’s a Cambridge professor who died and had his essence put into a robotic snake that keeps his corpse animated, a hardcore rockstar who seems to have become part guitar and part flamethrower over the years, and a nerd who floats around in his chair that required very little playing outside of myself to enjoy. Of course, as seems to be the case in the hero shooter genre, there’s very little character development outside of the small amount of text that’s given to us and telling these characters’ stories more fully doesn’t seem to be a priority for Bleeding Edge — nor should it be for something that’s so clearly incomplete as of yet. 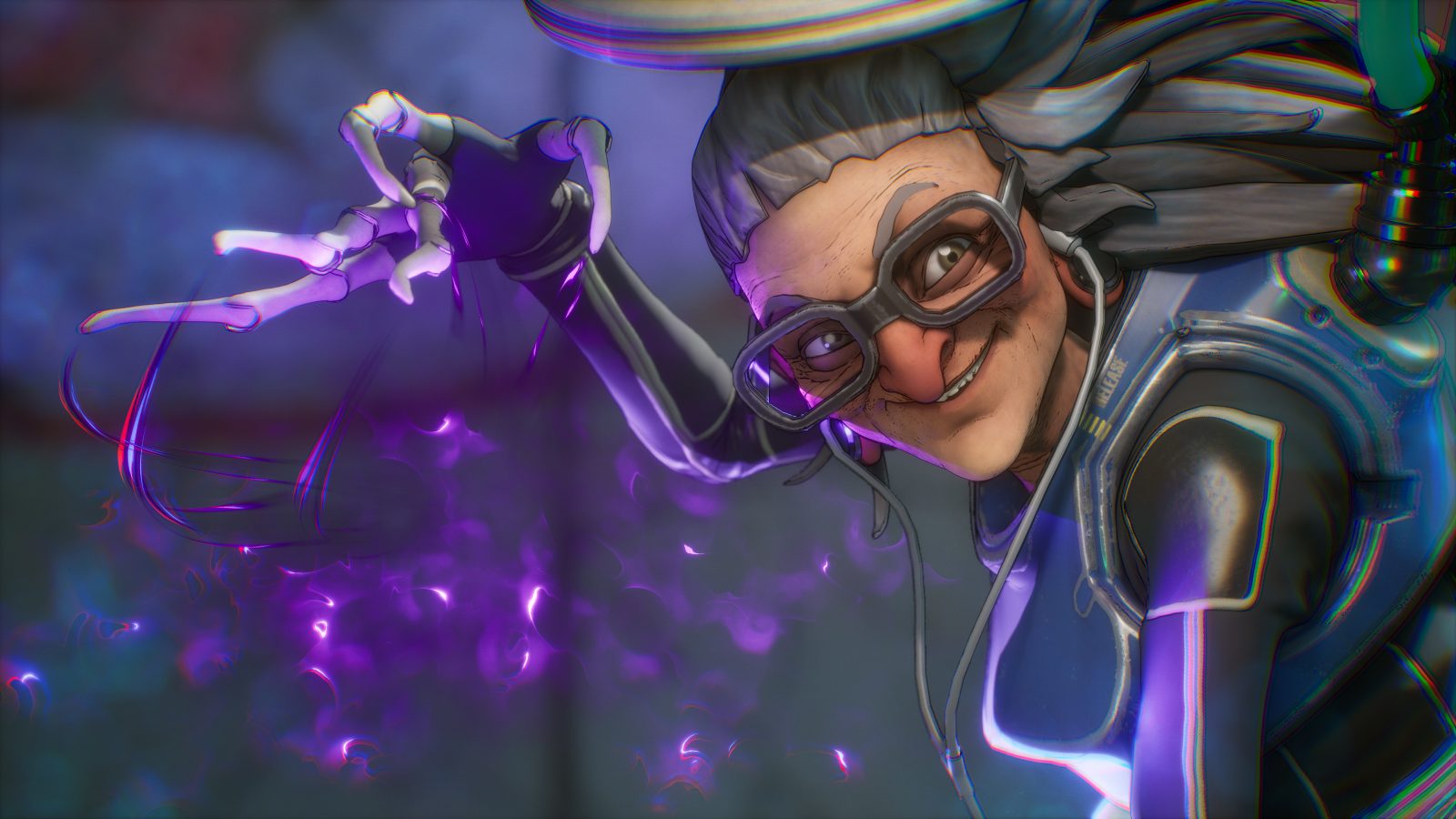 Even with so little character development Bleeding Edge succeeds at creating interesting concepts that draw you in and make you want to see what they play like and hear what they shout after each kill. There’s only 11 characters right now (with a 12th on the way shortly), but even with just these existing characters it feels like enough to keep things interesting for a long time due to the extreme diversity of aesthetics and roles. You might play as a wizened eldery woman who keeps her distance and uses traps and spells to deal massive DPS, or a biker riding a unicycle who gets in close and can withstand a ton of damage. Each character feels like an entirely different game that needs to be learned, respected, and mastered individually.

Working together is absolutely essential to success. Healers need to keep people alive while DPS characters focus on taking out the enemy, and tanks take the heaviest hits to spare their teammates. If you’ve played a hero shooter before then you’ll feel right at home with a hero brawler…y’know, minus the shooting part. Bleeding Edge sets itself apart not only with its melee focus, but with it’s unique abilities. Daemon the ninja can turn invisible and reappear to surprise an enemy and put them to sleep for a time. Maeve the witch-like character can trap enemies in a cage then deal massive DPS. The way each of these characters counter and complement one another are incredibly complex and require strategy and experience to master.

Beyond that, characters can also be customized to suit your particular playstyle. For example, while playing as the hero ZeroCool, I could use mods to make my character better at buffing other players with additional DPS or instead focus on simply healing more effectively and at longer distances. Choosing one over another should greatly impact how a character is deployed in the arena, which means that not every ZeroCool is going to function the same, adding some much-needed diversity and nuance to combat.

I’d be remiss if I didn’t mention just how stylish Bleeding Edge is in its style and expressiveness. Everything’s covered in neon, characters are over-the-top and weird as hell, and everything about the world perfectly fits the brawler’s mature, exaggerated tone. Even with content slim as it is during this initial launch phase what’s there now is all really high quality, and clearly Ninja Theory has focused on making Bleeding Edge successful at what little it does now, rather than make a lot of content. Still, even with the games-as-a-service model, it makes me wonder if Bleeding Edge could have used more time in the oven instead of risking losing players’ interest before more content can be added. 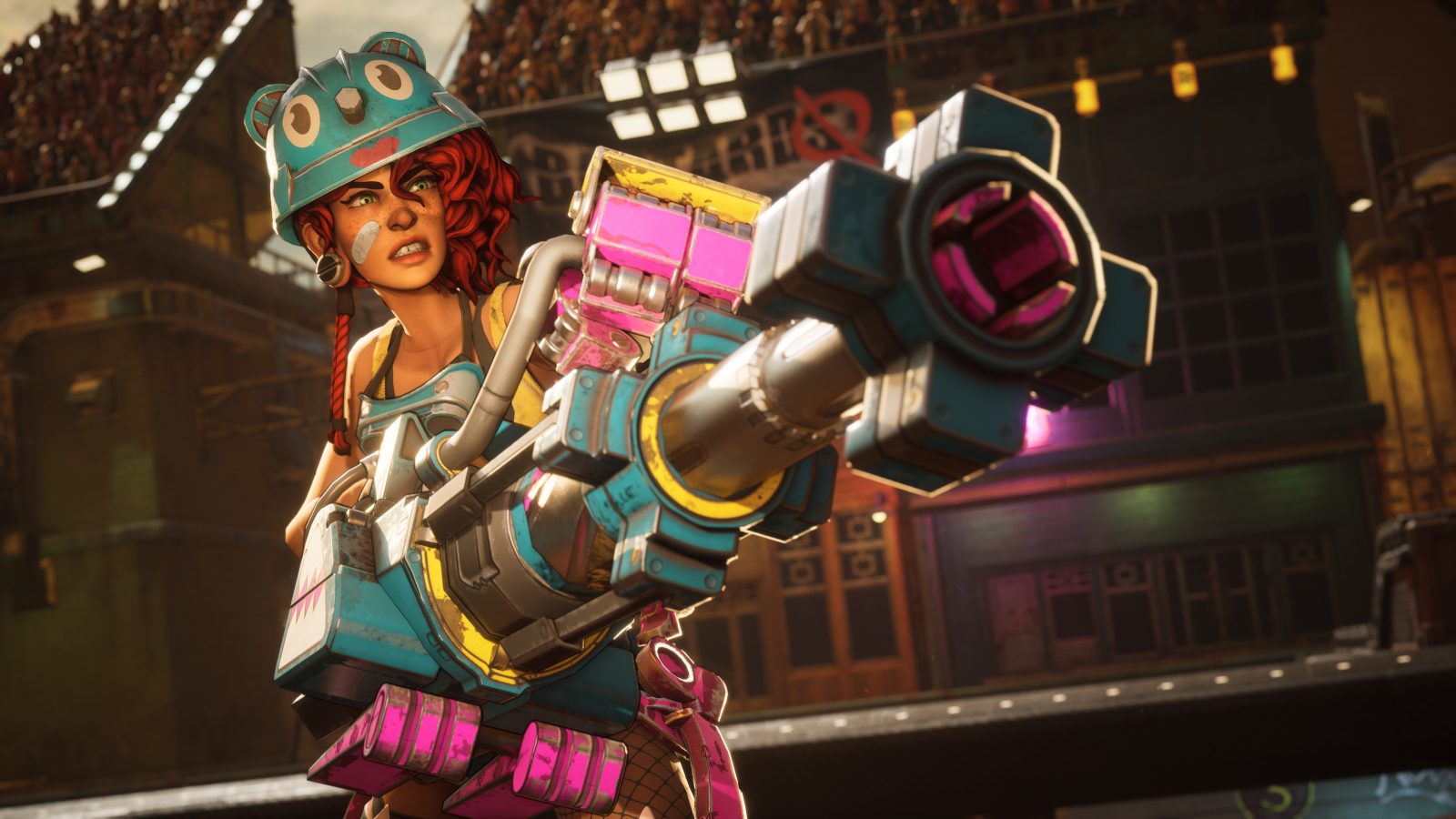 Both game modes available in Bleeding Edge right now are great, though there just aren’t enough of them. Power collection is about collecting and depositing batteries into designated deposit zones before the enemy kills you and does so for themselves. Objective control, on the other hand, is a king of the hill game mode that more often turns into an all-out street fight. But while each mode seems straightforward at first, winning requires extreme communication and teamwork. Running into battle without your teammates at your side or the objective in mind is a recipe for disaster.

It’s pretty bizarre that something so perfect for team-based objective game types has startling so few. After my fifth or sixth match of objective control or power collection I began to wonder why there was no capture the flag mode, or attack/defend mode, or any of the dozens of game types that Bleeding Edge would be perfect for. You can only play Bleeding Edge’s two game modes so many times before putting the controller down and saying, “yeah, I think I get it,” and that’s a problem for a brawler that otherwise has such awesome potential.

Bleeding Edge is a solid hero brawler that currently lacks content badly. While the foundations of this hack-and-slash arena brawler are strong and the roster of misfit circus rejects is absolutely stellar, there aren’t enough reasons to play beyond the first few hours. Still, every match of Bleeding Edge I’ve played has been enjoyable and fiercely competitive, and if they can retain their player base I’ll happily return to Ninja Theory’s latest chaotic playground.

You know that jerk online that relentlessly trash talks you after every kill? That guy was probably Travis "Tie Guy" Northup. Competitive, snarky, and constantly wearing a tie, Travis has been writing his opinions about electronic media since he was a teenager, and is pretty much the only person to hold his opinions in high regard.
Related Articles: Bleeding Edge
Share
Tweet
Share
Submit