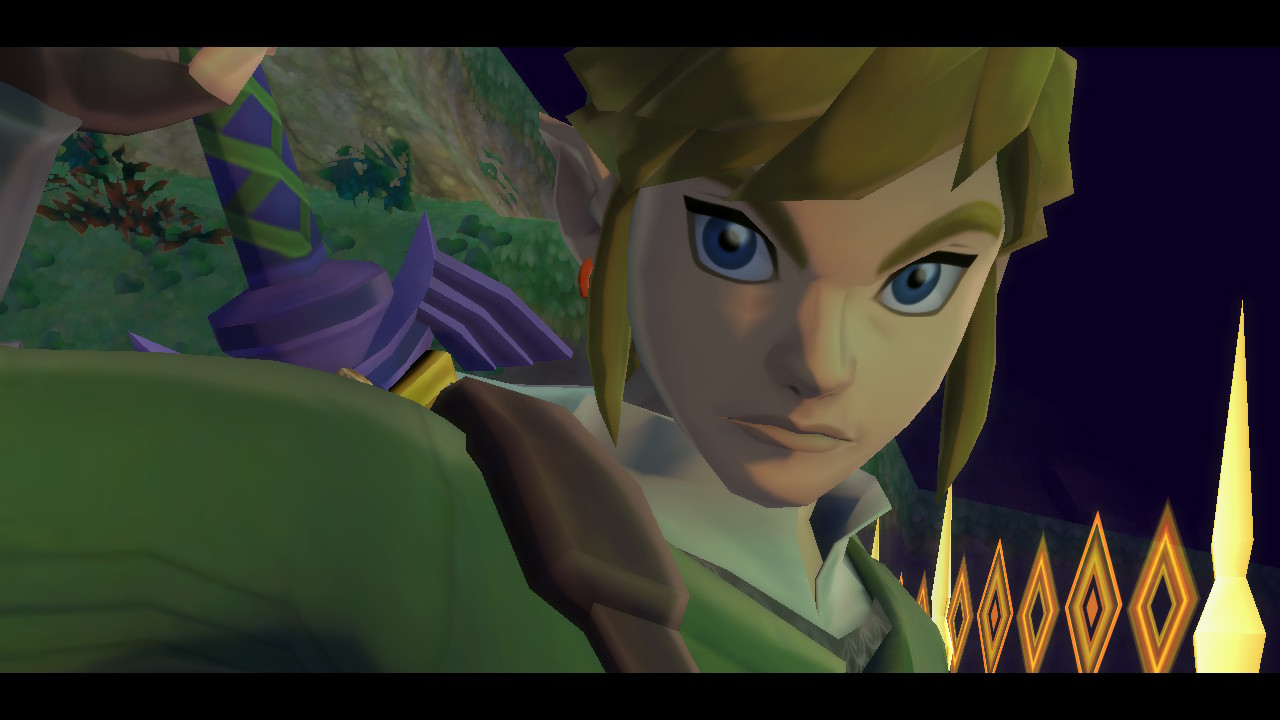 This is a tale passed down through the ages. Its actors and setting may change, but at its core this is the same story. But where did this epic originate? The first of these many adventures began in the sky, with two star crossed lovers unaware of the destiny before them.

Skyward Sword has had a rough reputation since it first launched on the Wii in 2011. It was received well initially by critics, but the general public had more mixed feelings thanks to the console’s sub-optimal motion detection dependent on the player’s environment. Thoughts on the game grew worse and worse over the years as more people detailed their gripes with the game, such as Arin Hanson of the Game Grumps on YouTube. I understand it has many problems, but I still like it a lot just the same. With new control schemes and quality of life improvements, is this HD release enough to turn that reputation around? 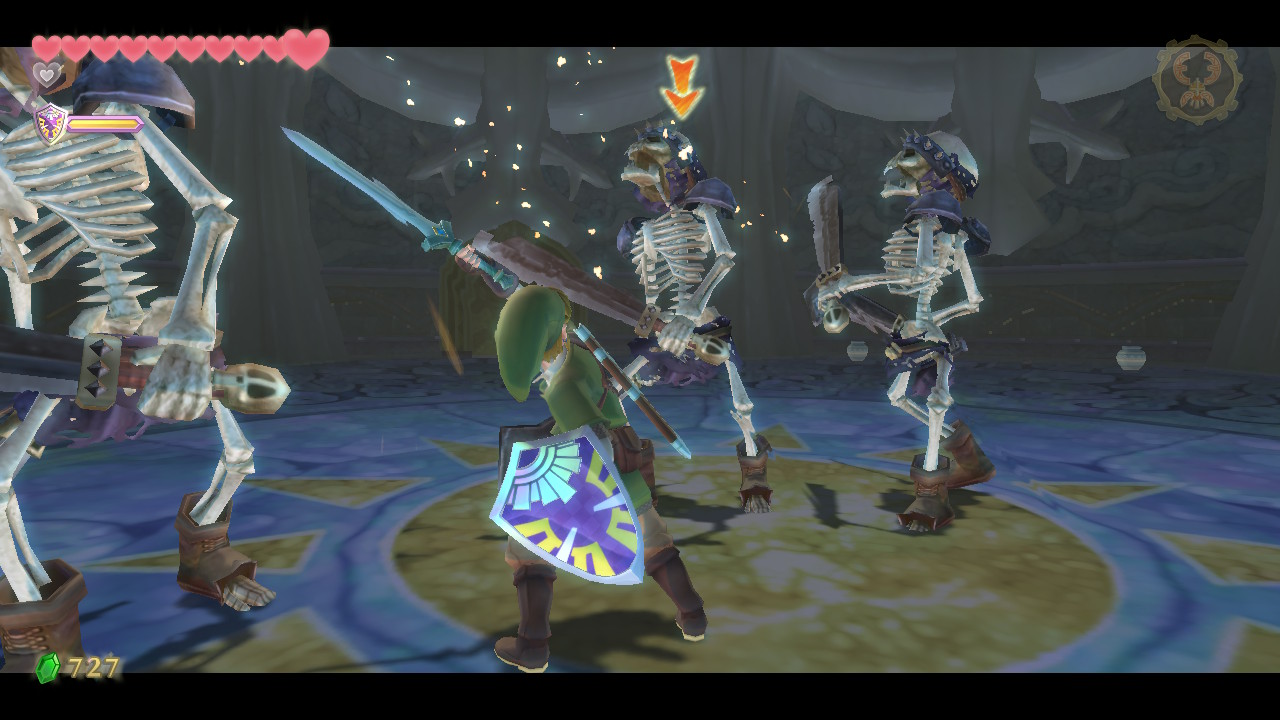 Since it’s been around ten years since the game first came out, you might not notice the vastly improved visuals. In docked mode the game has a resolution of 1080p while portable is at a respectable 720p, but both run at a constant 60 frames per second which is double that of the original. Textures have seen a huge overhaul and look clean even up close, and best of all Nintendo has implemented anti-aliasing to remove the disgusting amount of jaggies that were present on the Wii. Combine all this with the impressionist art style and this makes for the best looking and performing Zelda game on Switch, at least in my opinion. The only caveat to this improvement is oddly enough with Link’s face: the definition around his eyes and nose looks a bit too prominent now, making him appear tired close up (which, I mean, same) but it can look odd at this higher fidelity. You could argue this simply adds more character and personality to our hero, which is certainly in abundance in this title.

Skyward Sword came out in a strange time for Nintendo, when they were focusing on adding more depth to their stories just before trying to avoid stories entirely for most of the Wii U’s life and finally settling back on the middle ground we’re used to. Honestly, I’d like to see a return to this style, since while it’s not breaking any new ground it certainly makes the game more memorable and engaging. This version of Zelda is the most well realized we’d see until the next game, Breath of the Wild, and Link especially has a lot of subtleties to his character despite remaining mute. There are several times throughout the story where you have dialogue choices in a cutscene and as you progress these change from sounding fairly meek and shy to confident and heroic. You can even see this character development as you enter each masterfully crafted dungeon; in the first Link approaches cautiously while the last sees him charging forward to meet the challenges ahead. While in the future I’d like to see Link be more customizable, like having explicitly female or non-binary options, this development does a lot to help him feel central to the story. 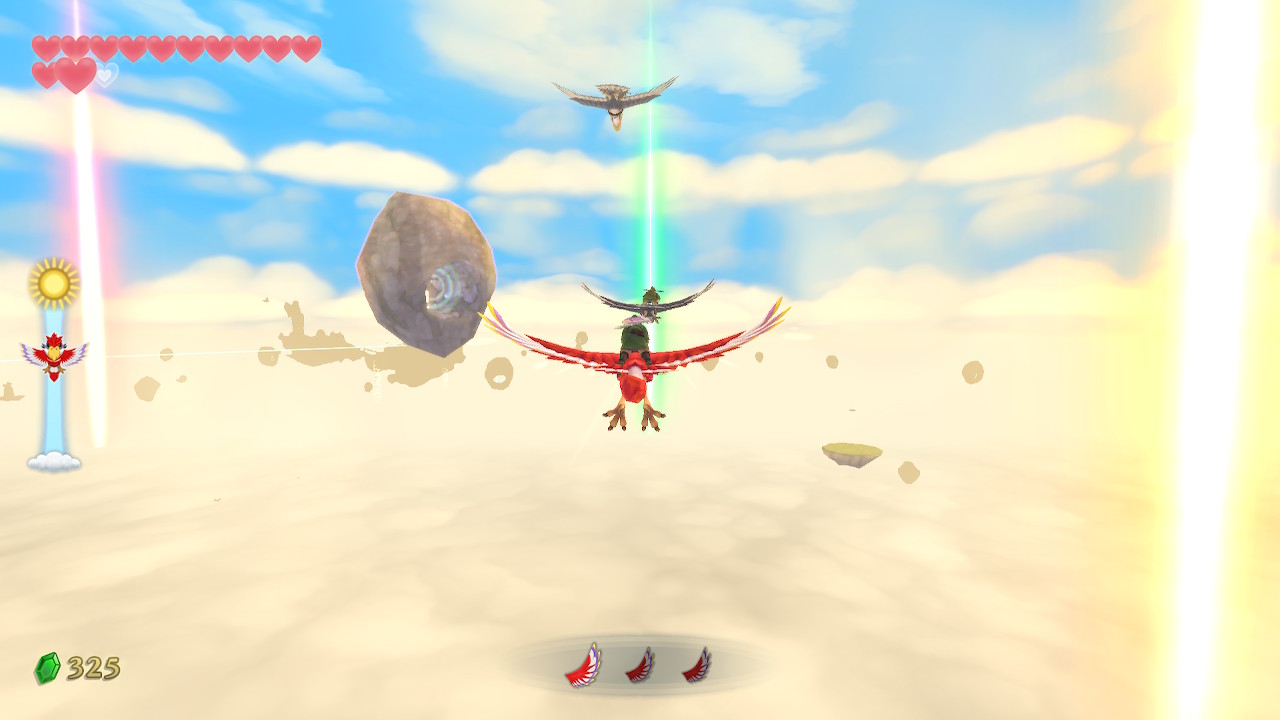 Part of that effort to focus on the plot of the next Zelda game led to the game being… Well, wordy, to say the least. Most of this came as repeating the same information several times over usually through your companion, Fi. The unnecessary dialogue has been trimmed down or made optional throughout the game, but not enough to remove the problem entirely. While I maintain that Fi is a good character at her heart, she’ll still bug you frequently enough to be annoying. It’s a shame that more character wasn’t injected into the mandatory dialogue, because her analysis of enemies and situations can be pretty funny with her deadpan delivery. For example, did you know that Bokoblins have a weird obsession with stylish underwear? Regardless, while Fi has been made somewhat less intrusive, the other major sticking point of Skyward Sword has been vastly improved.

Skyward Sword was designed around 1:1 motion input. You swing the Wii remote left, Link slashes to the left. This is integral throughout the entire game, with just about every combat encounter and puzzle requiring precise inputs. Wii Motion Plus was heavily dependent on a lack of wireless interference to function properly, so some people simply couldn’t get the couldn’t get the controls to work. To remedy this and allow for portable play, Skyward Sword HD presents players with two control schemes: button only (which uses the right stick for “motion controls”) and dual Joy-Cons (which works the same as the original). Since I play mostly in portable, the majority of my time was spent with the button controls. This works really well and is pretty comfortable, especially when enabling motion aming in button mode for that extra precision, though it isn’t without a few issues.

The camera controls work perfectly fine in a vacuum, but in button only mode you have to hold L to control the camera or use optional motion controls to look around a bit. Personally, I wish I could change this to a toggle or remap certain inputs for accessibility’s sake, but for whatever reason Nintendo hates options menus and we’re lucky to even have as many as there are here. When using the Sword, there’s a very slight delay between your input and Link’s action. This is so the game can tell the difference between a simple slash and a spin attack by moving the stick in two opposing directions one after another. It takes some getting used to, but after a while you stop noticing it. What’s more noticeable actually has to do with a hardware problem: the infamous Joy-Con drift. If your right joy-con is drifting ever so slightly, like my Splatoon green one is, Link will sometimes pull out his sword for no reason. It’s not a big deal, but if you continue to use the same controller over the almost 30 hours it can take to beat the game it can become more annoying than it should be. Given that Nintendo has shown no interest in a permanent solution to the problem, this is something players should be aware of before making a purchase.

I don’t usually talk about price, I prefer to judge a game on its individual and artistic merits outside of capitalism, but Skyward Sword is bafflingly expensive. You’d expect a remaster to cost less than the original did at launch, since it’s basically an improved version of the same game, but in this case the HD version is $10 more than the Wii. A massive quality of life improvement in the form of instantaneous fast travel is further locked behind a $25 amiibo figure, which is frankly shameful. There were several times throughout my adventure I thought “jeez, this would be much more convenient if I could find/afford that amiibo, too bad they intentionally make very few to keep demand artificially high.” This should have been part of the game, with the amiibo changing your Loftwing’s color or something, not putting an entire convenience feature behind a paywall. 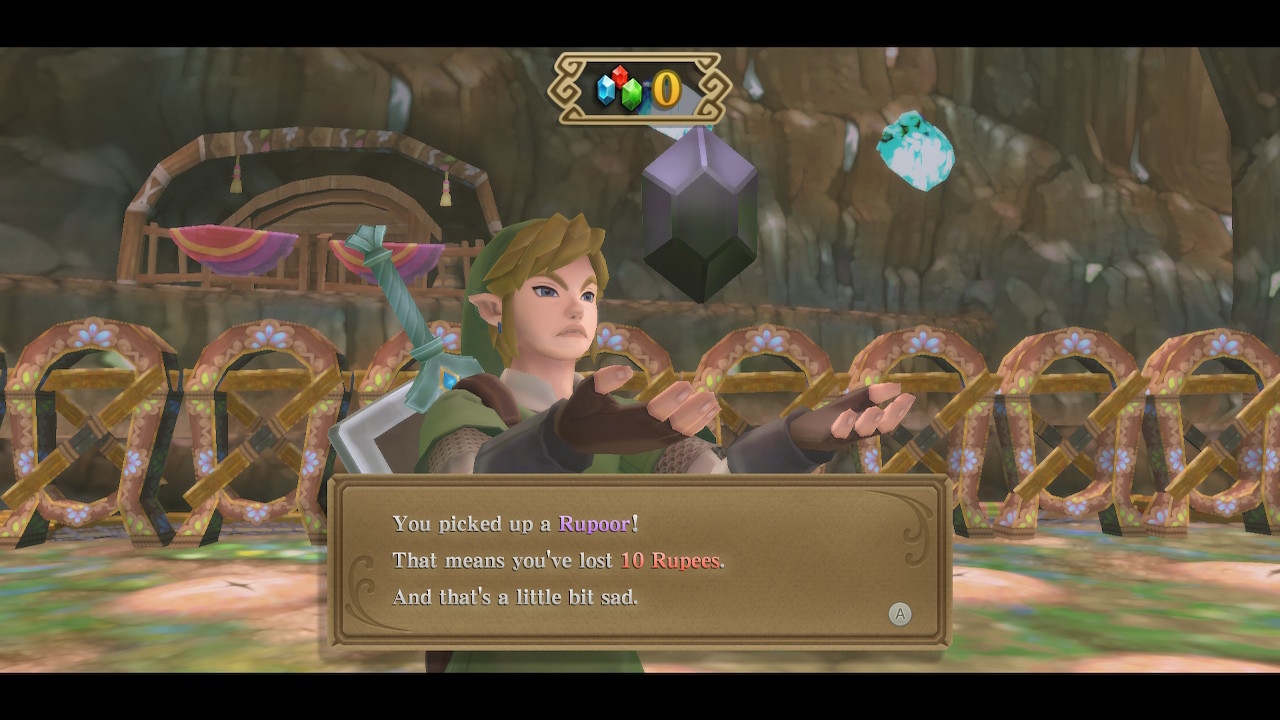 Speaking of Loftwings, the skies above the surface remain simultaneously cramped and empty. As far as I can tell, there have been no adjustments made to your bird’s slow flying speed so it takes just as long to get wherever you want to go. There’s also not much to see and do in the sky, with HD adding no new content whatsoever, so it remains a simple form of travel despite its potential. That being said, the actual act of flying around is still very fun and much easier with button controls, I just wish there was a little more to see and do.

The surface stands in stark contrast to the surface, which is densely packed with puzzles to solve, areas to explore, and secrets to discover. The designers took a dungeon-like approach to these areas, and it makes them an absolute joy to explore every nook and cranny, especially on revisits when you have more items at your disposal to reach new places. The dungeons themselves are no slouch either, I stand by the opinion that these are some of the best in the series up to this point and have some great aesthetics later on into the game like the Ancient Cistern. If I have one complaint, it’s that they’re a little too easy. Maybe it’s because this is my second time through the game, but despite not remembering any of the puzzles I was only stumped once or twice through the entire journey. Combat remains fun and engaging throughout, but I would have liked something such as Hero Mode available from the start to up the challenge, remix the puzzles, or even simply mirror the game so Link can be a lefty again. As it is though, Hero Mode simply doubles damage and removes hearts as drops and is unlocked after finishing the game.

Skyward Sword HD is definitely the best version of the game with vastly improved visuals and new control options, but I can’t help but feel it's lacking as a Zelda rerelease. There’s no new content, and I doubt the changes are enough to win over those who have problems with the game’s overall design. It certainly didn’t need to be a good game in its own right, but the lack of accessibility options and only somewhat reduced dialogue makes it difficult to justify the price.

David is the kind of person to wear his heart on his sleeve. He can find positives in anything, like this is a person who loved Star Fox Zero to death. You’ll see him playing all kinds of games: AAAs, Indies, game jam games, games of all genres, and writing about them! Here. On this website. When not writing or playing games, you can find David making music, games, or enjoying a good book. David’s favorite games include NieR: Automata, Mother 3, and Gravity Rush.
Related Articles: The Legend of Zelda: Skyward Sword HD
Share
Tweet
Share
Submit