I had my problems with Bravely Default II, but it was still a good game despite its flaws. You can read my review here, but the gist is that it discards what made the previous games in the series special. It’s only been a few months since the game was released on Switch, and now the game has been ported to PC through Steam. The content itself is exactly the same, so we’ll be focusing on the quality of the port.

The most notable upgrades to BDII are immediately apparent: the resolution and frame rate. You can set the resolution all the way up to 3840 by 2160 and supposedly the game supports high refresh rate monitors, though I don’t have the hardware to test this. On the surface, it looks better than the console version, but the game is severely lacking in options. Attempting to set your resolution higher than your monitor will have the game immediately revert back, so the game doesn’t support Dynamic Super Resolution if I understand the term correctly. 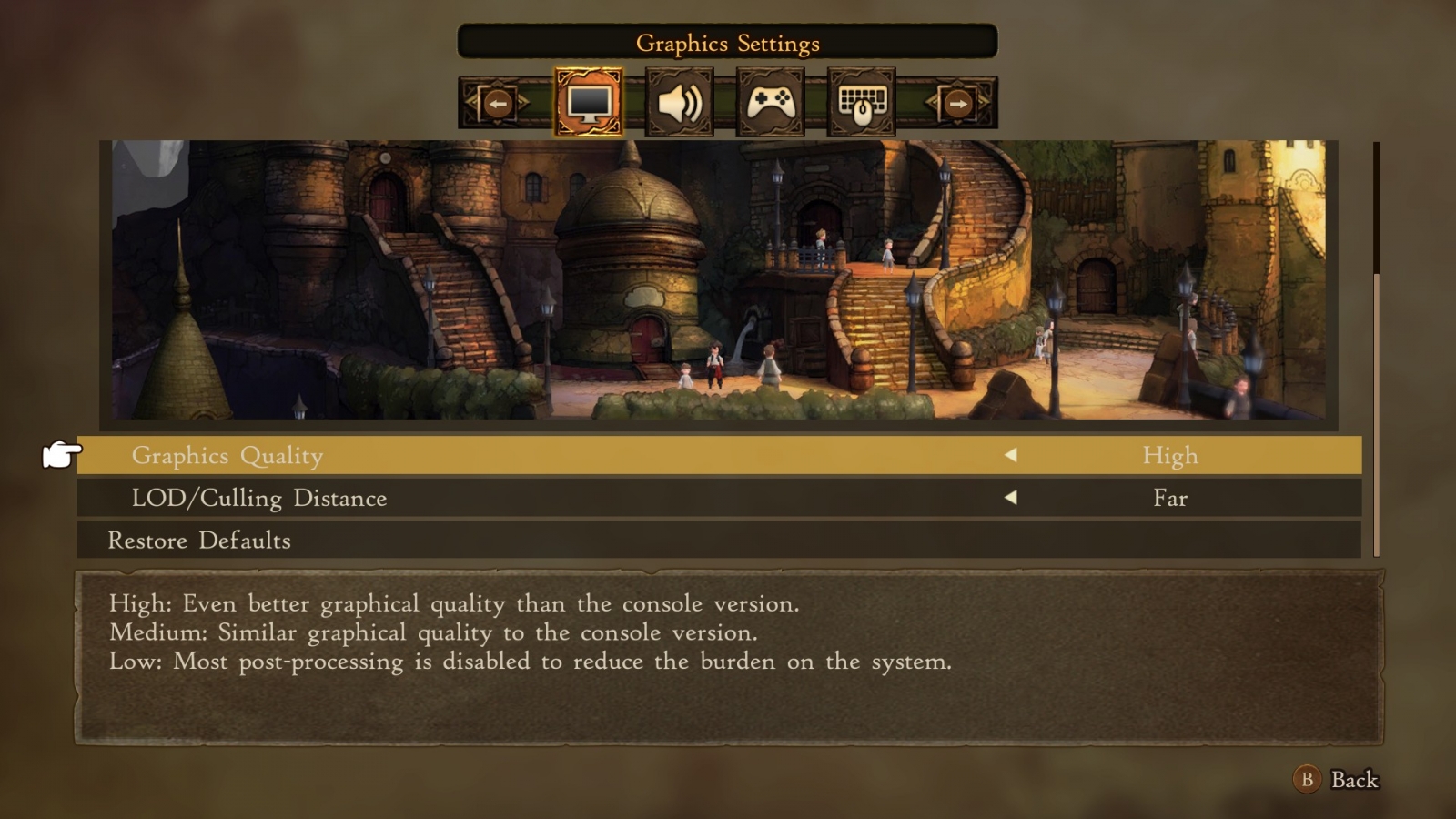 Apart from resolution and frame rate, which will match your monitor when VSync is turned on, there are only two other graphics options total: the nebulous Graphics Quality, and LOD/Culling Distance. The former has three presets: Low, Medium, and High. Medium is around the quality of the Switch version, but High honestly doesn’t look much better. In particular, Elvis’ book, which is a major plot element throughout the entire game, looks less like a book and more like a gross fleshy mass. I wasn’t expecting Square to fix my problems with the game’s design or character animations, but I certainly thought they would put more care into a PC port. Heck, the game doesn’t even support Cloud Saves for goodness sake.

For a game so reliant on menus, you’d think adding mouse support would be a priority, but the game is keyboard only. Sure, you can use left and right click to confirm or cancel, but there’s no cursor whatsoever and you can’t even control the camera on the world map with it. Bravely Default is supposed to bring you back to the golden era of RPGs with modern conveniences, but II on PC is more like going back to the stone age of Japanese PC ports; rush jobs with very little effort put in. I hate to call any developers lazy, because making a game of any size or quality is a herculean task, but that’s what this port feels like to me: lazy. 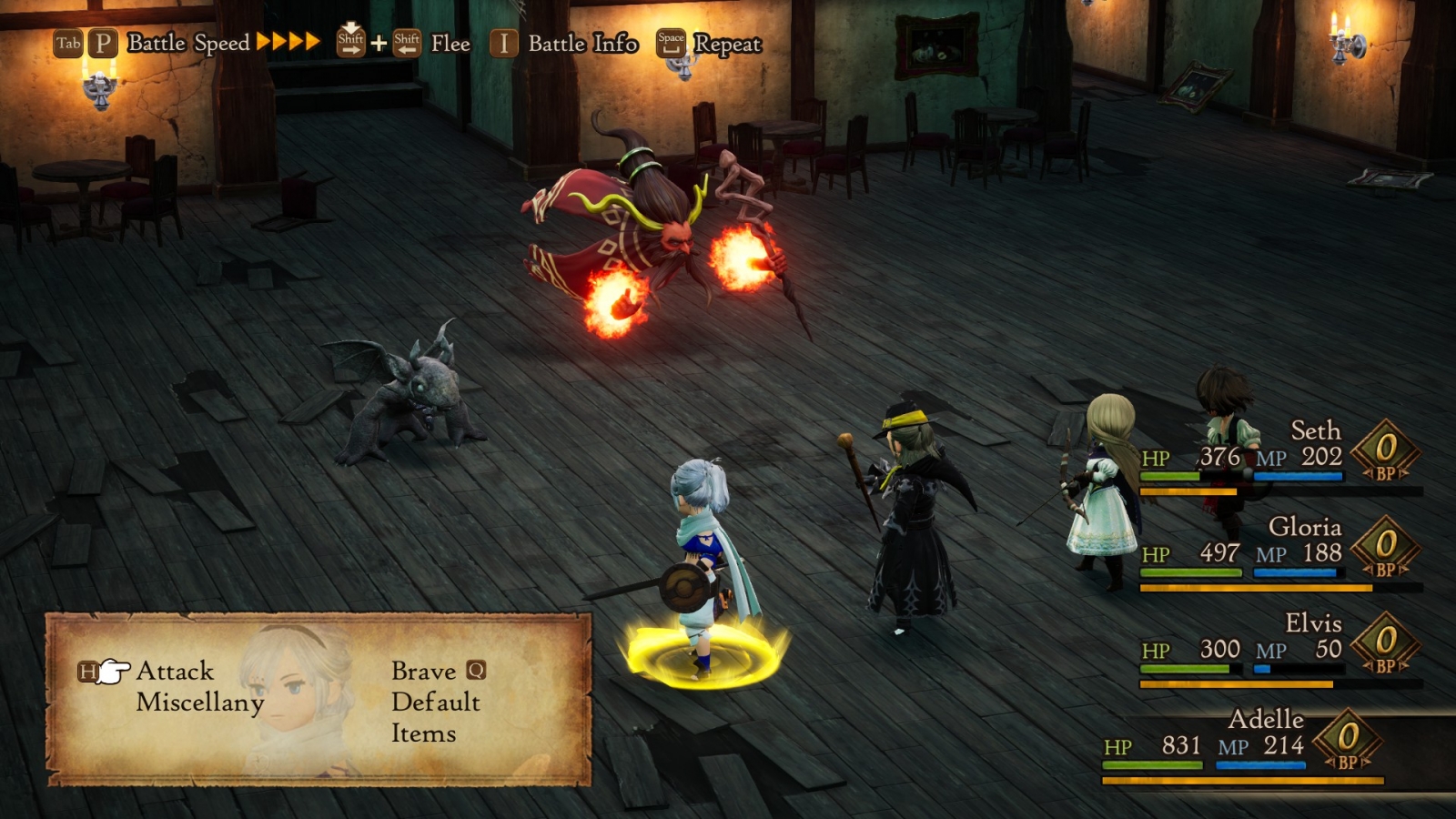 The only other change is with regards to the online, which no longer requires Nintendo Switch Online nor for the game to be running in the background. That’s certainly nice to have, and expected for a non-portable port, but unless you really need that high resolution and framerate for a turn based RPG I’d still recommend the console equivalent over the PC version. Especially when you consider the price: it’s $60 when you can easily find a physical copy of the Switch version for up to $10 less. The game is still pretty new, but I would have expected more from a full price PC port.

Bravely Default II is a very flawed but good RPG that deserved a better PC port. With a lack of options that still somehow result in smeared textures, the console version is still the way to go at this price.

David is the kind of person to wear his heart on his sleeve. He can find positives in anything, like this is a person who loved Star Fox Zero to death. You’ll see him playing all kinds of games: AAAs, Indies, game jam games, games of all genres, and writing about them! Here. On this website. When not writing or playing games, you can find David making music, games, or enjoying a good book. David’s favorite games include NieR: Automata, Mother 3, and Gravity Rush.
Related Articles: Bravely Default II
Share
Tweet
Share
Submit