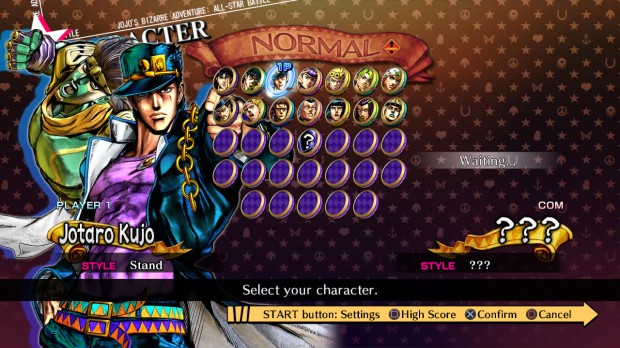 While I love the Dreamcast and have a decent collection of its games, I have always regretted trading my copy of Jojo’s Bizarre Adventure. Since I was unfamiliar with the source material and the control scheme was much different from the fighters available then, I don’t feel like I was able to appreciate it. When it became available on XBLA and PSN, I checked it out again and enjoyed it more. When I heard that Jojo’s Bizarre Adventure All Star Battle was coming to the US, I was excited, but I still wondered if I would have the same reservations as what I had before.

Jojo’s Bizarre Adventure is a manga that started in 1986 and has continued since then in a popular weekly Japanese magazine. It follows the British Joestars family for several generations as they encounter characters with supernatural abilities like Vampirism, projections, and focused energy. You might have thought with all the popularity of the supernatural and vampires lately that some translation would have been released here, especially with the anime explosion in the late 1990’s and early 2000’s. My guess is that it was deemed it would be too difficult to summarize the series with such a long history and bring over here.

CyberConnect2 was tasked with creating All Star Battle, and their work on the Naruto Ultimate Ninja games made them a natural fit to successfully translate another manga series to a video game. Their work transforming Naruto looks great, and All Star Battle does as well. While the game characters are all 3D, the textures are so detailed that it has a hand-drawn look. Since several special moves give you close-ups of the characters, the detail makes the game look spectacular. Not only that, but the framerate never slows down, making the experience so fluid that I suspect that some players could get motion sickness.

It can’t be said that the players aren’t varied though, since each character fights with one of five specific styles. Hamon characters charge their energy to power up their special attacks, while Vampiric characters drain the energy from other characters to increase their stamina. Some characters employ Stands, which are like an astral projection connected to them that gives them unique attacks. Some Stands stay out permanently while other Stands are summoned and recalled during the battle. Pillar Men enable a Mode that increases their strength for a short period of time but makes them vulnerable when their time runs out. Finally the mounted characters actually let you battle while riding a horse. If that sounds crazy, it really is, but it’s also awesome.

If the cast of characters sounds insane, that’s because it is. Playing these characters results in a high learning curve for a couple of reasons. First, the characters have a play style all their own. Secondly, there isn’t any kind of character tutorial. A practice mode exists where you fight against a dummy character without worrying about each other’s health, but you have to bring up their command list to find out how to perform the special moves. A tutorial for each style would have been helpful.

The controls take some getting used to as well. Several of the moves use quarter circles which should be familiar to anyone who has played a fighter, but Instead of controlling punches, kicks, or specific limbs, moves are made with a strong, medium, and weak attack button, in additionto a style button brings out special moves. You can rapidly push a single button to form combos, making the controls friendlier to button-mashers, but again, a training mode to learn the moves would have been beneficial. The movement of the characters is really slow, and each match starts out so far away that both players usually start out running towards each other just to get close when “FIGHT!” plasters the screen.

If you are looking for any kind of English dub in All Star Battle, then you’ll be disappointed. All of the characters speak in Japanese and have subtitles. The men speak with deep booming voices, although sometimes it sounds like something from Ninja Warrior.

You’ll find several play modes typical of other fighters. The Arcade mode included makes you fight through the characters to reach a boss without any kind of story. The Story mode has each character fight against a specific sequence of characters, and this is how new characters are unlocked in the game. The Campaign mode has you spend energy to fight, giving you new character animations like poses and taunts when successfully won. Most of the time you won’t run out of energy to move on to the next fight, but you can purchase more energy with real money similar to many mobile games. This seems out-of-place in a full-fledged release like this, but at least you really don’t need to pay money to continue playing.

If you like to play online, you’ll find out that the options are disappointing. You basically have the option to play one-on-one against someone else and that’s it. Watching other players has become a great learning tool, but that isn’t an option here either. The connectivity can feel a bit sluggish at times as well, which hampers such a fast-paced fighter like this one.

In the end, Jojo’s Bizarre Adventure All Star Battle flashes a lot of style but lacks the substance that prevents it from being a great fighter. With a large roster of characters, smooth framerate, and excellent graphics, All Star Battle could have brought Jojo’s Bizarre Adventure positive U.S. exposure. However, with no tutorial, minimal online options, source material, and an odd control scheme, this one is definitely for the fans or someone who is compelled to play every fighter available.