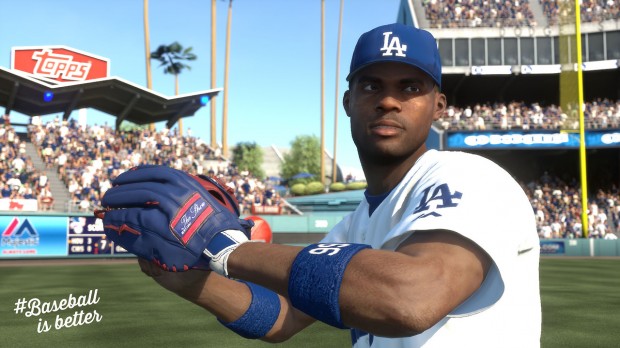 While many sports games have already taken the leap to PS4 and Xbox One, The Show franchise took an extra month of development time before springing onto Sony’s newest platform. With exception to NBA 2K14, most of the games that landed on the new consoles were a bit underwhelming. The MLB: The Show franchise has long been thought of as one of the best sports franchises out there, so hopes were high that their transition would be a meaningful one. Developer Sony San Diego has been promising a new, highly innovative next-generation jump in MLB14: The Show. Could this talented group come through?

MLB: The Show was one of the original innovators of using the right stick to control a majority of your characters movements. MLB: The Show named it swing stick and inserted it into every batting situation, forcing you to pull back and push forward when you want to swing at an incoming pitch. This feature returns in MLB 14: The Showand still works incredibly well. Despite the depth it adds for veterans of the franchise, it can be frustrating for newcomers. Because of that, Sony San Diego lets you to choose a beginning difficulty that allows you to use the old school hitting style which revolves around hitting the circle button at the right time to swing your bat.

Sports games have also long been considered one of the more complex genres. Many new players will approach a game and immediately be lost. The Show is doing its best to rectify that stigma with both the easier difficulty and all new “Quick Count” mode. The Quick Count mode is meant to expedite the length of MLB games, which are notoriously long and occasionally boring for non-baseball loving folk.

This is done by starting at-bats off with a “statistically generated pitch count,” meaning Derek Jeter could come up to bat and already be in a 2-2 count before a single pitch has been thrown. While the intentions are understandable, the execution is lackluster. Quick Count falls short due to the predetermined pitch counts leading to frustrating scenarios that seem more unfair than “statistically generated.”

Some of the other accessibility additions come in during the gameplay as well, but are far from noticeable to the inexperienced eye. For example, the camera no longer pops up and follows the ball once you connect on a hit. It instead angles upwards from home plate and follows the ball that way. This leads to a much stronger presentation and gives you the sightline of the batters running to first base, who may not know if that deep ball is a home run or long fly-out. On top of that, there are a host of new animations introduced in this version of MLB 14: The Show.

You can describe gameplay additions all day long, but visuals are by far the biggest focus in the jump to next-gen consoles. Character models remain very good with only a few occasional oddities. The sheer amount of work put into each player is incredible, and that amount of work grows every year. Sports game crowds have always been scrutinized, but you can no longer do that with MLB 14: The Show. The crowd gathered around to watch you play is by far the best ever seen in a video game with 1,000 unique characters being modeled. Facial animations remain just as superb as in past years, as does the gorgeous recreations of the numerous MLB stadiums. DIrt kicks up beautifully as players sprint down the baseline, which is just one of the many things that makes this truly feel like a “next generation” game.

MLB: The Show’s biggest feature for years has been its expansive Road to the Show mode. This experience allows you to create your own character, get drafted, and then progress through the minor leagues into the big leagues. While this mode is nearing perfection, MLB: The Show introduces a nice addition a nice addition in the form of a Rookie Showcase mode. This mode makes getting drafted more competitive, whereas in past years the draft was just a wall standing in your way to getting onto the field. You now choose from four locations (East, West, Central, International) and compete against fellow MLB hopefuls from the remaining three locations. The better you do in these games, the higher you will be drafted. If you are unhappy with your first go around in the rookie showcase, you can choose to go back to college which will cost you a few years. But at the same time, it will let you perform in the Showcase again and give you a certain amount of skill points to upgrade your player. This addition to Road to the Show is brilliant, and proves that greatness can become even greater.

In one of the odder choices by Sony San Diego, they decided to completely redesign the UI. This new menu design is very similar to the ones you see in EA Sports games like Madden, NCAA, etc. The real issue is that this design never felt great in the EA games, and that continues on in The Show. While the menus are slightly standardized in this new layout, switching tabs to find certain options is no more enjoyable than simply progressing down a long list of the same options. It introduces a very small but unnecessary nuisance

As for the franchise mode, little to no changes have been made. Of course, the new rosters will offer a bit of variety due to shifts in the lineup from the previous year. That said, the roster is still currently lacking a few superstars such as the Yankee’s Masahiro Tanaka. Sony has stated that this will be rectified soon, but it is frustrating knowing you have to wait a few weeks before starting a franchise simply because you want a certain player on your team. As for the franchise mode itself, no significant additions were made. The only noticeable change seemed to be a slight tweak to the difficulty. It seems to be much harder to simulate a season, manage your team from menus, and still be successful.

Coming into the release of MLB 14: The Show, it was clear that this is the king of baseball games. Not only is it the king but no other game is coming anywhere near it's level of greatness for quite some time. Thankfully, Sony San Diego does not take that lightly as they have continued to build on an already fantastic product. There is no doubt that some of their additions fell a bit short, but those are the risks you can take when you are the uncontested king. The graphical enhancements in the PS4 version of MLB 14: The Show are undeniable and true proof of how far we can go with visuals this generation. Whether it is in graphics or gameplay, MLB: The Show continues to rule the sports game world.