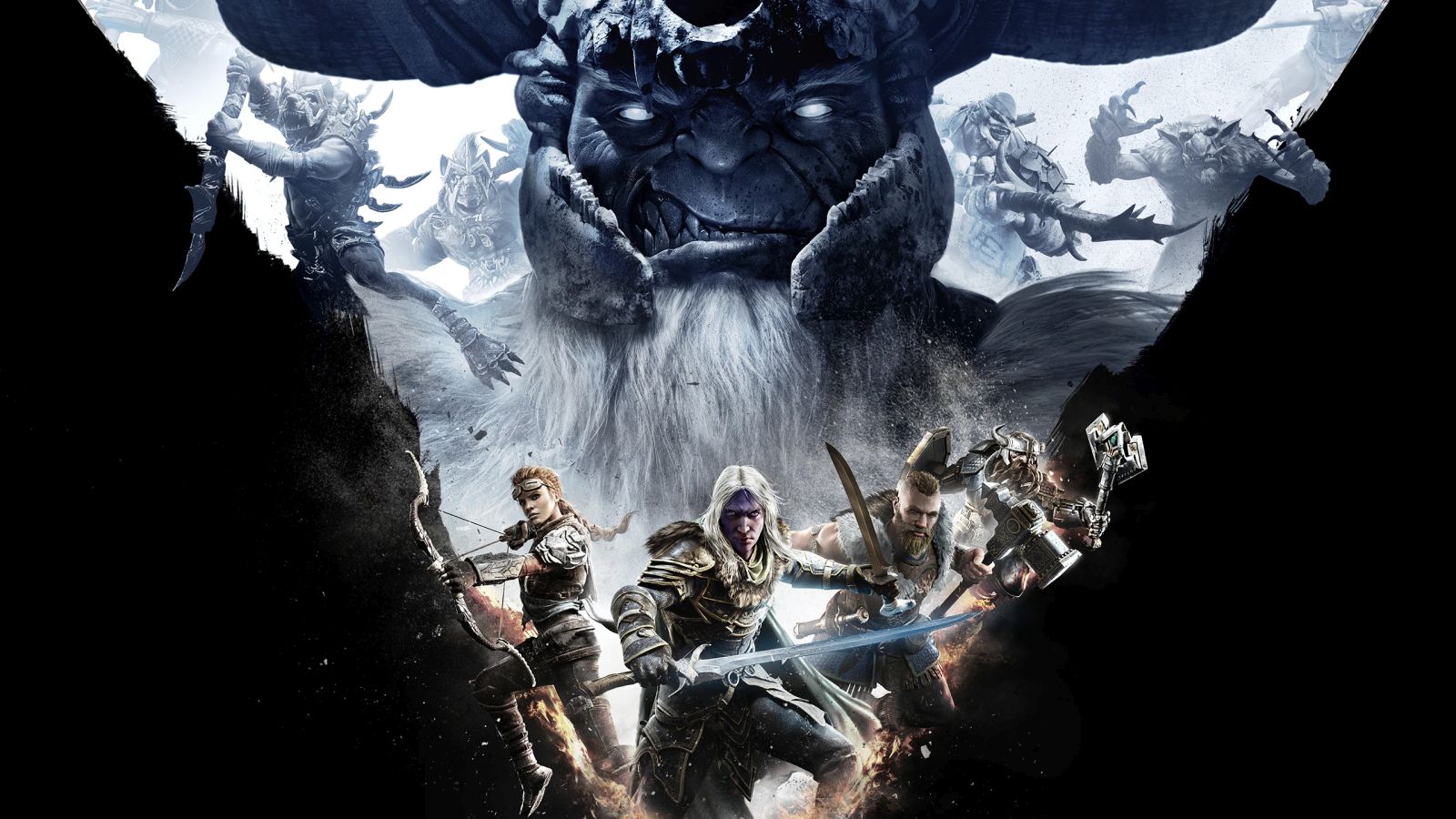 I grew up on Forgotten Realms. Drizzt Do’urden and Guenhwyvar, Catti Brie, King Bruenor Battlehammer, Wulfgar, and Regis (who isn’t included in this adventure) were the Companions of the Hall, and in each I imagined the expanses of Icewind Dale, magical axes, dracolich encounters, and the shadow dragon Shimmergloom. Their adventures were some of my favorite books, and I’m sure I’m not alone. When Wizards of the Coast announced a resurrection of the Dungeons & Dragons: Dark Alliance franchise with a brand new cooperative adventure starring the Companions of the Hall, I couldn’t be more excited. One of the first RPGs my wife and I ever played was the original on the PS2, so this 2021 incarnation had big boots to fill.

With the tutorial out of the way, Holly, David, Laura, and I prepared to set out on our adventure. What we ended up doing was fighting with an unnecessarily painful matchmaking system for over a half hour instead. There is no convenient way to start a party and get everyone in it, and the game keeps its secrets close to the vest with no discernable way to join a party from the main menu. What you have to do is start a game session on your own, then toggle the game to friend invites only (which causes the campaign to reload for some reason), then tab out to the Steam profile, find your friends in the list, invite them from there, and hope everything works out. It took more than a dozen attempts before we got all four of us in the same space. In one instance I invited the other three, and they all ended up in a party together, but I was left alone in my own game, despite being the party leader and the person doing the inviting. It’s obtuse and buggy — a theme that would color the rest of our time with the game.

With the adventurers ready to roll, and Holly somehow made the leader despite me starting the party, we prepared to set out. Holly had to be the one to initiate the first foray, selecting the mission from the map dias. She was treated to a fully voiced explanation of where we were going and why. The rest of us were treated to…well, nothing. We stood in the courtyard while she enjoyed her cutscene, and we got bupkis. Oh well, off we go.

Loading into the first map without any idea of why we were there, we started beating up Duergar dwarves and other various denizens. We clobbered a ton of them using a blend of basic and heavy attacks. After a few levels we started to augment these attacks with special moves, such as Drizzt’s ability to turn invisible (enemies see you anyway), or Bruener’s shield (I’m not sure what it’s supposed to do, but it drops a big circular ring around him that does…something. Maybe). Each character has 50 skills, all in, though it’s clear that some skills need some debugging.

Clearing the first area and heading to our first boss, Laura and I were slightly ahead of David and Holly who had turned back briefly to investigate a ladder they had spotted. We suddenly found ourselves face to face with the boss and a magical shield preventing us from retreating. Well, that same shield prevented Holly and David from entering the fray, though they could lob otherwise-ineffective ranged attacks into the space. We died, of course, and respawned…inside the force field. About to quit the whole mission, we had an idea to break this leash mechanic. Holly ran to another part of the map, far away from the fight. Suddenly we snapped to where she was…and now all four of us were locked out. We found the nearest acid pool and doused ourselves in it to die, forcing a respawn. Finally able to enter the space, we started whipping on the boss. He lost about 25% of his health, fell through the world, and then we won, I guess? It’s hard to call any of this a win.

We got a patch for the game the next day that was supposed to fix these issues and more. It didn’t. Setting out on our own, Laura and I embarked on our next adventure. Rubber-banding, despawning enemies, foes falling through the world, clipping issues, taking damage from traps you aren’t anywhere near, being one-shotted by foes that a moment earlier struggled to do any damage, and more. This game has more of an infestation than an Underdark Chitines nest.

One of the things we did like about the game is that equipment you collect isn’t readily available until you complete the mission and return to camp. It keeps the train moving, preventing players from digging around in their pouches mid-adventure, breaking the stride — they can do that on their own time between outings.

Graphically, the game is pretty to look at. The characters look like how you might have imagined them from the books, or from the few games that have featured them in the past. Each character and monster is incredibly detailed, as are the environments. In fact, they are downright gorgeous. The equipment is strange, though. By the time I hit level 4 as Drizzt I looked like some bizarre version of Scarlet Witch. Since there’s no merchant to purchase equipment (everything is found in dungeons), you are stuck with whatever drops, no matter how doofy it looks. Yes, you can spend some coin to swap colors, but generally it is what it is.

Every level you go up grants you points to place into powers to grow your attacks, bump your health, and otherwise augment your hero. These powers can change your special attacks, but generally speaking you’ll be spending most of your time wailing away on the bumpers and triggers.

We need to pause here a moment and talk about the controls in Dark Alliance. Given that all four of us were playing on PC, we naturally expected to use the mouse and keyboard to play. Well, that’s all but impossible. Attacks are done with the mouse, but dodging means taking your hands off of WASD and using the arrow keys. Yes, you can remap the controls, but it’s nearly impossible to enjoy this game on the PC without using a controller. Dark Alliance was built for consoles, and it really shows. While the game performance is fine on PC, even at 4K, the control scheme is highly controller-centric.

Back to the game mechanics, you’ll pick up various equipment and coins throughout the game. These can be sold in at the merchant (who again doesn’t sell anything), or you can upgrade it using your cash. You can transmogrify the look of the gear, or use the various shards you’ll unearth to bump their rarity and level. It means you can grow the gear you find to match your level.

Each of the levels are split into three outings, each culminating with a boss battle. The level layouts have various twists and turns, traps, and pitfalls to keep you busy. Yes, the traps will damage you occasionally when they aren’t active, but it does try to align with the D&D 5E rules that this world is based on.

The part that breaks my heart most is that when Dark Alliance is working correctly, it’s not a very engaging affair. A basic beat-em-up, it drops the nuance of its Dungeons & Dragons roots in favor of flashy effects and fast-paced action. Sure, it’s fun to dance around a spell-slinging Beholder, whipping high-speed attacks, arrows, and massive hammers. It’s less fun when bugs rear their head, making the button-mashing slog to get to these set-piece battles too much to endure.

Infested with bugs from start to finish, Dark Alliance is a button mashing affair that drops the 5E rules in favor of flash. The bosses are great, but the parts in between less so. Here’s hoping developer Tuque can pull this out of the Deep Wastes with their post-launch plans.

Ron Burke is the Editor in Chief for Gaming Trend. Currently living in Fort Worth, Texas, Ron is an old-school gamer who enjoys CRPGs, action/adventure, platformers, music games, and has recently gotten into tabletop gaming. Ron is also a fourth degree black belt, with a Master's rank in Matsumura Seito Shōrin-ryū, Moo Duk Kwan Tang Soo Do, Universal Tang Soo Do Alliance, and International Tang Soo Do Federation. He also holds ranks in several other styles in his search to be a well-rounded fighter. Ron has been married to Gaming Trend Editor, Laura Burke, for 21 years. They have three dogs - Pazuzu (Irish Terrier), Atë, and Calliope (both Australian Kelpie/Pit Bull mixes).
Related Articles: Dungeons & Dragons: Dark Alliance
Share
Tweet
Share
Submit