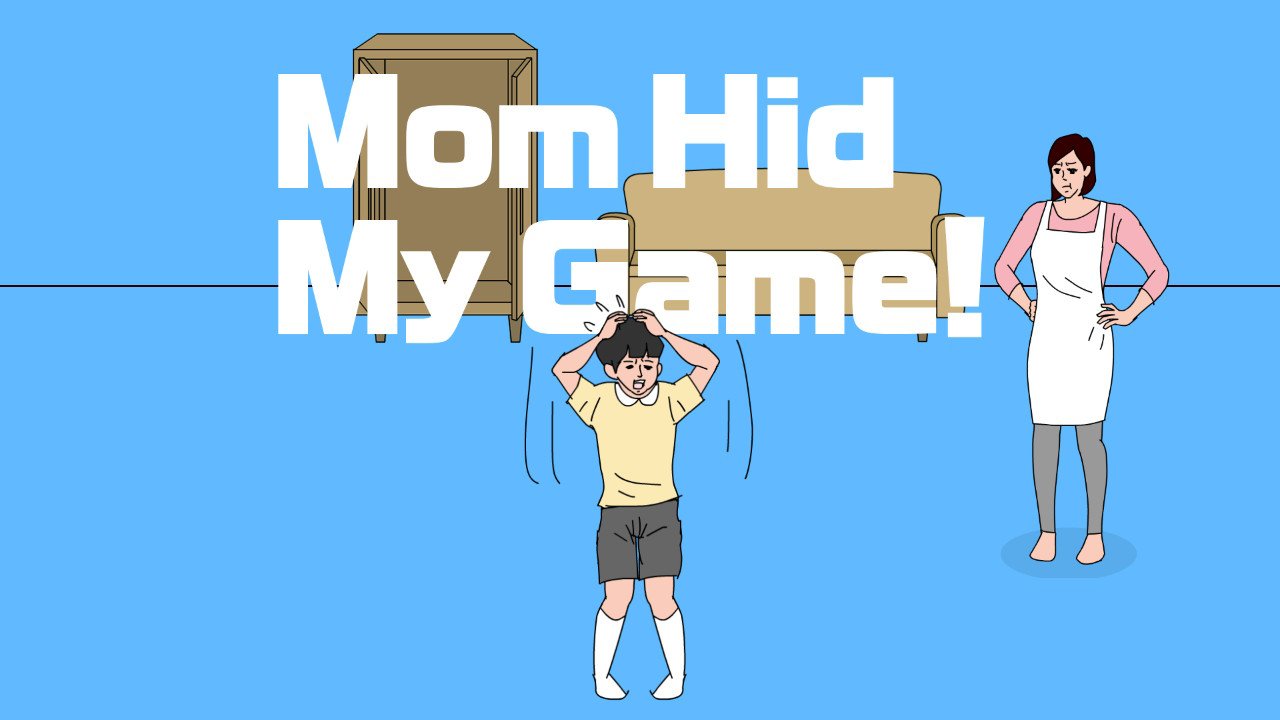 If you grew up with strict parents, you know how hard it was to game when you were a kid. You were always in danger of getting your favorite console confiscated due to bad grades or some other misconduct, and you needed to think out of the box in order to retrieve your prized possession. Mom Hid My Game! emulates the experience of trying to find your lost handheld, and while it’s a limited experience that’s over way too quickly, it still offers a pretty hilarious time for what it’s worth.

Mom Hid My Game! is a quirky point-and-click adventure game where you control a child whose Game Boy-esque handheld is taken from his mother. In true “escape the room” manner, you’ll have to solve fifty different puzzles (which are noted as days) in order to get back your game. While the first few days are straightforward, later ones get bizarre and slightly obtuse, with the solutions getting weirder with each passing day. From bicyclists blocking wardrobes to a giraffe in your house, there is no shortage of zany objects to play around with.

In addition, you have to contend with your mother, who is always watching you from afar; in fact, almost every level has your mother conveniently in the background, and clicking on her will usually end the game, forcing you to start over from the beginning of the day. Once you get your handheld (in a variety of silly methods), you can move on to the next day. You can also store up to four items in your in-game inventory during each puzzle, and you can use the touch screen or Joy-Con buttons to interact with objects. The button scheme is very awkward to operate (think of playing a Vita game with touchscreen controls on a PlayStation TV), and it’s cumbersome to navigate through the game with it. I’d recommend the touchscreen method as it works like a charm here (especially since the game was originally released on mobile devices).

The main draw of Mom Hid My Game! is its bizarre and avant-garde humor. There’s really no rhyme or reason to these puzzles, and you don’t know how something is going to react to your touch or item, and sometimes it’s super hilarious. One of the later puzzles places your handheld device in a balloon, and you have to interact with a baseball player in order to get it free. You can take the player’s bat and then throw a baseball at him, thus hitting him square in the stomach and lying in pain, resulting in a game over. I don’t know why, but I busted out laughing when I did this, and there were quite a few times when the weird humor would be very entertaining. The fact that mom hides in the oddest of places deserves a few chuckles, and it’s an unusual way of saying she cares (as shown by the end of the game, which somewhat justifies her actions).

While I did like the humor and concept, the presentation is mixed. The slightly minimalist Warioware artstyle works very well for the game, but it’s not remarkable and ends up being slightly average for the whole game. The blue background motif is pleasing to the eyes and wasn’t eye-searing, but at the same time I’d be hard-pressed to tell you which backgrounds are what. The music is one short loop that goes throughout the duration of your playthrough, and will be drilled in your head so much that you might just end muting your Switch and just playing in silence.

Additionally, the puzzles are rather easy and straightforward compared to other point-and-click games; there’s a hint system that I admittedly used for a couple of trickier puzzles, but I never felt like I was truly stuck for more than a minute or so on any given day. It would have been more interesting to see different days reference previous ones, and each puzzle seems very easy to solve. Because of this, it does exacerbate the short length somewhat; the whole game can be finished in a single one-hour sitting, which will turn off puzzle fans that want some more meat in their game. The price point of $4.99 might seem a bit steep considering the original game was free, but I think it’s an appropriate price (though I’d recommend something like Shephy as another cheap puzzle fix).

Mom Hid My Game! is a weirdly hilarious title that suffers from a host of problems, but its flaws are what make the title enjoyable. If you have an hour to kill and want something cheap to purchase on your Switch, you should take it for a spin.

Elisha Deogracias is an aspiring accountant by day, freelance writer by night. Before writing for Gaming Trend, he had a small gig on the now defunct Examiner. When not being a third wheel with his best friends on dates or yearning for some closure on Pushing Daisies, he's busy catching up on shonen manga and wacky rhythm games. Mains R.O.B. in Smash. Still doesn't know if he's a kid or a squid.
Related Articles: Indies, Mom Hid My Game!
Share
Tweet
Share
Submit