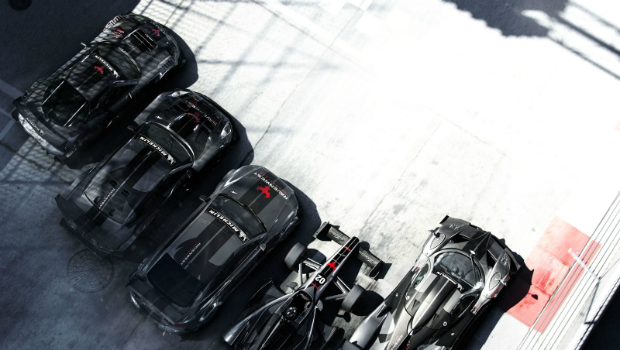 Most racing games are way too easy. Kick the vehicle into high gear, smash through braking opponents, take shortcuts when available, never play by the rules of the road and you’re pretty much golden in every racing game that has ever been made. GRID: Autosport is the exception to the rule. Each race is a tiny gauntlet of perfection challenges, with any little mistake becoming a grave harbinger of your last place finish to come. Minus the simplicity of other racing AI and game mechanics that plague otherwise great racing games, GRID: Autosport provides the best racing experience that this reviewer has had the pleasure to take part in. Unfortunately, a total lack of freedom and absence of basic racing game expectations takes GRID: Autosport from good to pretty terrible quickly, an unfortunate turn from what could have been.

Let’s start with the racing itself. GRID: Autosport has one of the best racing experiences out there. The speed of the vehicles is well balanced with how the vehicle controls. Braking and maneuvering through the corners is very challenging and rewarding when done right. Elevation and direction of the road plays a major factor in how the vehicle responds. All of these elements, combined with various white line zones where penalties are enforced for cheating, make for a vicious test of one’s racing ability. Fortunately, the GRID series signature Flashback is there to save you when you make to vital a mistake, a simple button press reversing time to allow you to remake your decision. The Flashback function has been changed since GRID 2. Now when you reverse time, the happenings both in front and behind you change as well, as everyone is given a “second chance” to take that section. The AI drivers as so much more free to make decisions and it’s reflected in the Flashback function as well as in how they drive and defend against you.

As in the previous GRID games, players begin a career either as themselves or some made up racing phenom. This time around, players do not begin with a car they can tinker with or a list of objectives. Players are instead given a choice of five different racing disciplines. Each has it’s own set of challenges and expectations, and will be explained in detail later. Players choose one of the five disciplines and then choose a sponsor. This is where things change a little from most racing titles.

The sponsor provides a vehicle for each race, chosen by them rather than by you. There is no keeping the vehicles you race in, so unlike other games where you may race 100 races with one car, you only get to race 3-5 times with one in GRID: Autosport and then it’s pretty much gone. While it feels a little more realistic to be loaning cars through sponsor money than collecting cars like a manic billionaire, isn’t that part of the fun of a racing game? While there are online and free-play modes where cars can be collected, the lack of it in the career mode, the place where most play time will likely be spent, is a total negative.

That unfortunate detail aside, the career mode is magnificent. As noted before, drivers are given the choice of five distinct disciplines of driving. Touring is a smashmouth road course style of racing that encourages contact (and some change for gas).   Endurance racing is a time-based night race where drivers are measured on how far they can drive on four tires before the race ends or the tires blow. Open-Wheel is racing the familiar Formula 1 style cars, a style that relies on speed and control of the vehicle, with contact with other racers or the track almost instantly resulting in catastrophe. Tuner racing focuses on handling heavy and light vehicles alike through corners and in drifts. Lastly, the Street racing competition sees races in tight city streets, usually in smaller, slower vehicles.

Drivers choose one of these and race through a season. Once the season is over, the player is rewarded with experience in that discipline. Players can choose to continue in one discipline or branch out into all five, at any pace that they choose. Good performances in the season championships will unlock new championships to take part in, and as you progress, you unlock special GRID series races that present even more unique challenges.

The real drawbacks with GRID: Autosport is a simple lack of freedom. You never really get to choose your courses, or choose your vehicle, or choose anything. You pick a type of race, pick a sponsor, and then everything is dictated to you. Online play is fun, but you start with very little in the way of vehicles or currency, and it can be a grind to earn either. There is a Custom Cup mode where you can choose the races you want to run, but there really isn’t a point to it, or any payoff other than running the races themselves. It functions more like a glorified practice mode than anything else.

Car customization is a total joke in GRID: Autosport’s offline modes, having been dumbed down to sliders that affect performance. Absent is any way to change a car’s engine or parts, wheels, tires, paint color, air freshener, or anything else you may want to tinker with. You don’t do anything in this game but drive. The driving is totally awesome, without a doubt, but it gets a tad old after clicking through menus and driving a car you’ve never driven before over and over. GRID: Autosport boasts that “This is Autosport” and I suppose making you a dedicated driver with no other function is a reflection of that motto. Kudos to Codemasters for sticking to their guns on it, but it reeks of laziness.

The final negative in this big bucket of negatives is the lackluster presentation. Though the ambiance of people and vehicles around the track is excellently presented, the graphics are so rough and blocky that it is kind of lost on the eye. Every menu is the same bland black and grey, with the tired old “modern” look that is so sought after these days. The fact that I can comfortably refer to the “modern” look as old is saying enough about just how boring it is. The disembodied voice companion in the game has a British accent. Snore. The same three songs play over and over again on repeat, like some sort of techno nightclub on a strict song budget. Even after all of these terrible problems, as soon as you get into the actual race, you’ll understand why GRID: Autosport really is a good game, maybe trying to hide behind a facade of terribleness.

Grid Autosport is magnificent in racing and pretty terrible everywhere else. The races themselves are challenging, spirited, and have both great track responsiveness and opponent AI. The game fails, however, when it takes players freedom of choice away in many aspects, dumbing them down to mercenary drivers. Unfortunately bad presentation and the lack of basic functions from other racing games is a harsh subtraction for a full price game. Grid Autosport could have been a great game, and points to a magnificent future for the series and Codemasters. But Grid Autosport is not a great game. It is a fun game with a great racing mechanic, trapped in the musky husk of a quickly slapped together post-PlayStation 4 era PS3 release. Let Grid Autosport be the harbinger for things to come on the PlayStation 3. For both the GRID series and PlayStation 3 clingers-on, the message is clear: evolve or become obsolete.