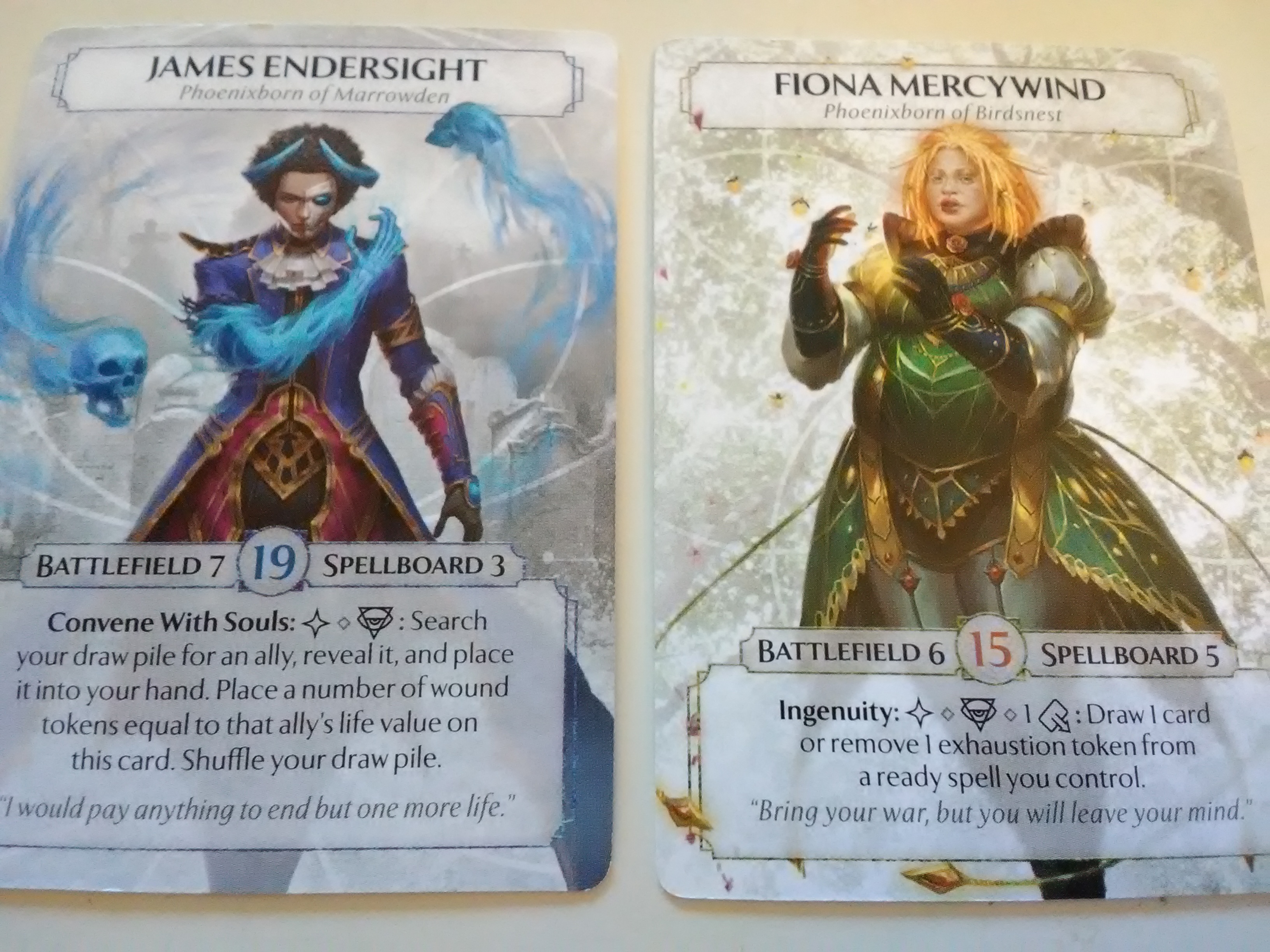 A mysterious necromancer and hopeful albino psychic round out Ashes’ lineup to bring an abrupt but quality ending to one of history’s greatest card games. Ashes: Rise of the Phoenixborn was a game of rare, exceptional beauty. I don’t know if I’ve ever seen a design so tight, focused, and elegant in a competitive card game. With a few limited exceptions, Ashes’ lifespan was vibrant and inspiring, and I am sorry to see it go only a few years after its inception. I don’t know what problem exactly has wormed its way into Plaid Hat in the last few years, leading to cancelled projects and inconsistent quality, but I suspect the multiple changes in ownership have had a serious hand in its fate. I am sad that we are not going to see the Time die type (though rumblings in the earth say that fans are working on developing their own set) but pleased that Plaid Hat has managed to finish the game they started. With James and Fiona, the existing die types are in balance, and I am happy to say that these final decks are as exciting and well-crafted as the very first…mostly.

Both decks have a ton of utility, managing to be internally consistent and to grant a ton of new options to existing Phoenixborn. James’ deck is Ceremony/Divine, while Fiona’s is Charm/Symphony. Even leafing through these cards for the first time, my head was swimming with additions I could make to existing decks, while performing well within their own decks.

The Grave King has a limited spellboard at 3, which will force some harsh deckbuilding choices, but his ability to pull allies from the draw pile makes his focus more clear, not to mention a battlefield of 7. With a number of ways to put allies in your discard pile, as well as allies that want to go there, you’ll be chaining a lot of units into and out of the grave. All the while his spells give him a number of benefits for sacrificing units. Despite a few powerhouses that have a ton of utility (gaze in awe at Immortal Commander below), my personal favorite is Rising Horde and the Fallen they create (also below). For two dice, you get three units that you can easily use to attack, block, or sacrifice as necessary. Because the Horde has one life, you can use James’ side action ability to pull them from your deck and summon them in the same turn. Now look back at Immortal Commander and think about the kind of power he could put out with them. 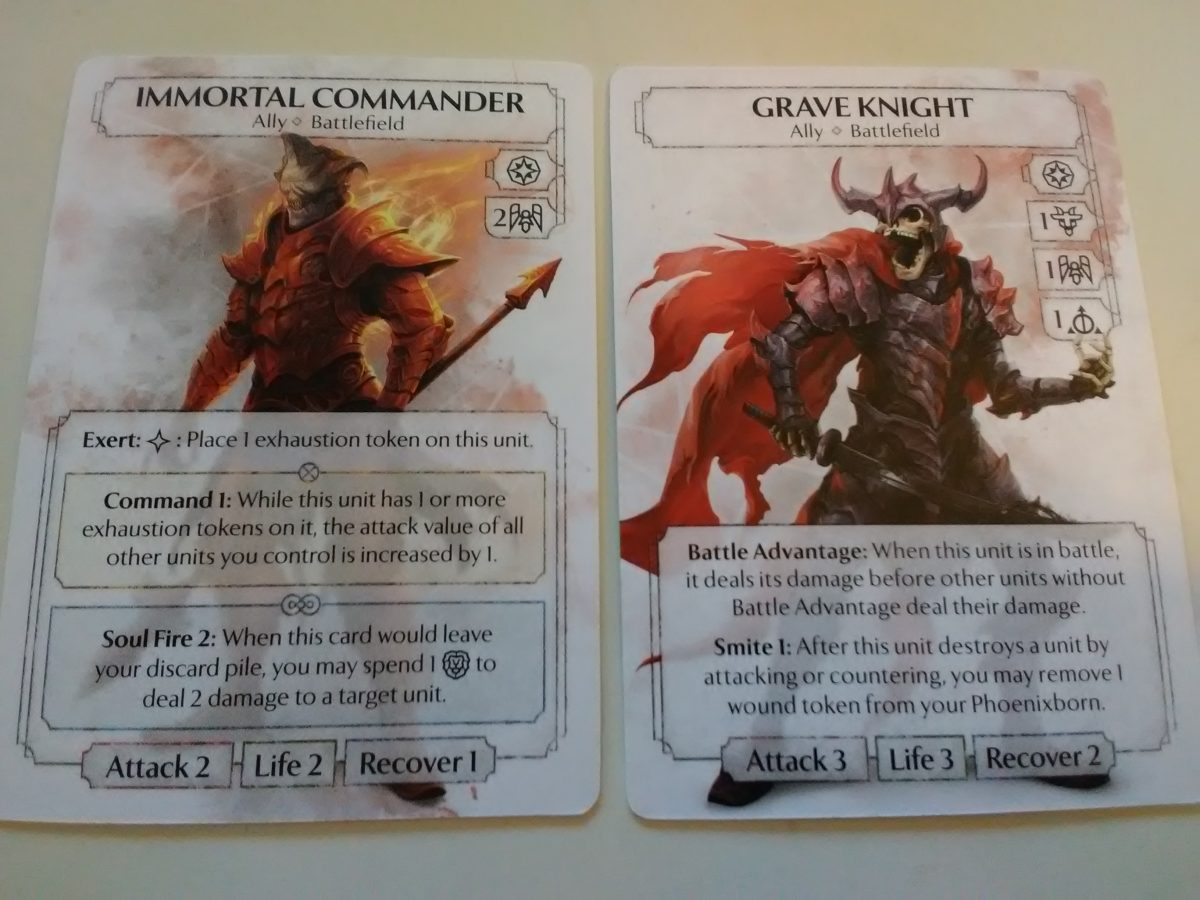 He has few units, but focuses on getting the most out of them. His spellboard is pretty small but he boasts a hefty battlefield. He can pump out cheap units, benefit from eliminating them, and bring them back for more power. With 19 life he will have to use his special sparingly, but with a few more Jessa cards swapped out for some of his own, I see James being a serious force to be reckoned with.

I do take issue with one new card at his disposal, that being the Law of Repentance. I am of the opinion that the various Law cards are a detriment to the game, acting as blunt force “you can’t do this” cards compared to the more nuanced design of the rest of the game. I can at least say that this card creates a more interesting cost and effect analysis and gives you 2 healing (thus making ceremony or James’ ability more enticing) but its latter effect ranges from useless to overpowered depending on the dice type you are facing. 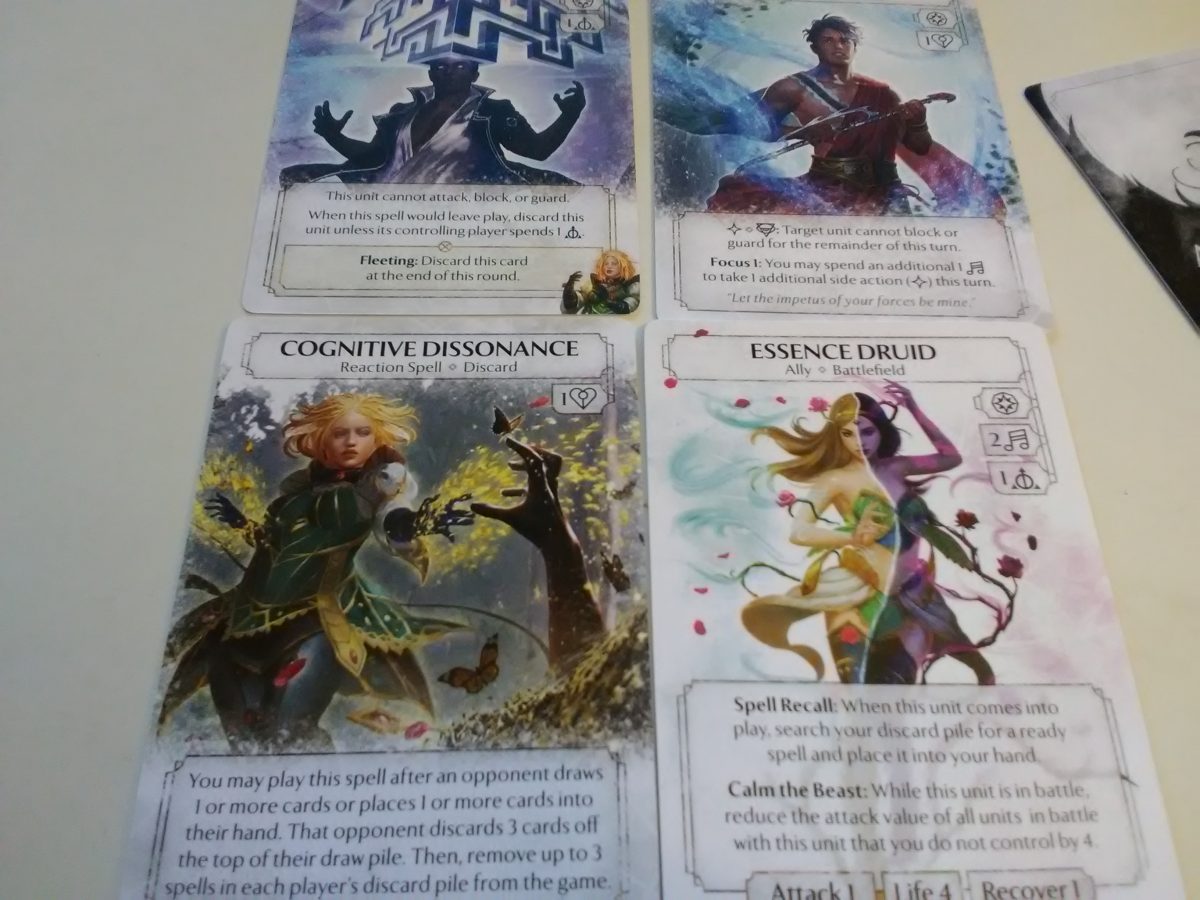 Whereas James Endersight makes his moves with powerful allies and the occasional summon, Fiona is more about mind games. Her deck felt less cohesive than James’ during my playthroughs, but increased complexity is far from surprising for a Charm/Symphony combo. Combining cards which benefit from being discarded, an abundance of card draw, many ways to lock down opposing units, and variable ability costs, Fiona has a ton of options at her disposal. Most of Fiona’s cards are about building up to something or stymying your opponents from doing so, but not enough to help you clinch the win. Beyond the meaty powerhouse that is Majestic Titan, combined with the elusive Mind Fog Owls, her actual win conditions seem hard to meet. In my matches, she spent a lot of time building a decent engine and dancing around the opponent’s machinations, but making little impact of her own. With 5 spellboard and 6 battlefield she has a lot of space on the board, but a scant 15 life leaves her little room for mistakes. I think that a mill deck or one with some more potent mid-range units could go far in the competitive scene.

There is an overall issue which has occasionally poked its head out from time to time and unfortunately returns in these final decks: cards with far too much text. Yes, it’s necessary for some of the fascinating interactions that Ashes creates, especially as Plaid Hat works more and more to maximize every piece of the game’s design space, but a surprising proportion of these cards are covered in text that explain their effects and conditions. While I actually like the individual cards a lot, this creates a few issues. First and foremost is that the increase in text leads to a (minor) decrease in text size. This combined with the many lines contained within each paragraph make the physical act of reading the cards more difficult. Furthermore, each card brings with it a lot to keep in mind, between the conditions, uses, and associated costs. Understanding them for the first time can be cumbersome, but referencing them in game (when the inevitable rules issue arises) brings the game to an inordinately long halt. Finally, there is a good chance that with four other cards in your hand and plenty on the table, you’ll simply lose track of all of your options. As an example, take a quick look at Summon Night Song Cricket and a few of James’ cards. 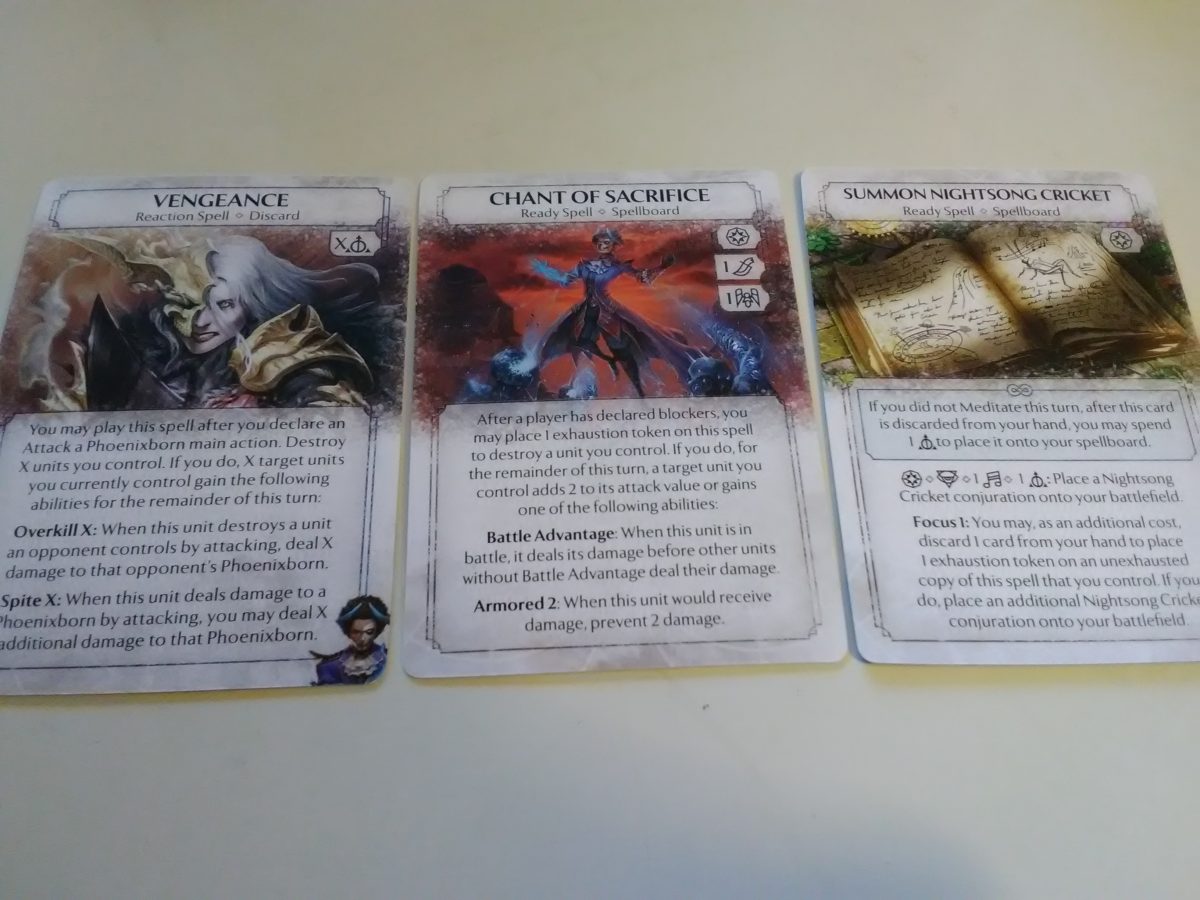 See, those effects are fascinating, and create incredible opportunities not only for Fiona, who is incentivized to discard the card, but Coal for his slash, or as easy fuel for a Chant of Protection. It’s just a shame that it takes so much ink to get you to that point. Nightsong Cricket is just one example of this trend.

The end of Ashes is a grand one, paying tribute to some of the best of the series' design. With cards that keep your focus on board presence, boosting not only the current decks but original Phoenixborn as well, the game's final two decks round out the game in style and substance. Despite a few rough edges, I am happy to see this much work put into the end of this series, even if I am sad to see it die so quickly.

John Farrell is a legal aid attorney specializing in domestic violence, living in West Chester Pennsylvania. You can listen to him travel the weird west as Carrie A. Nation in the Joker's Wild podcast at: https://jokerswildpodcast.weebly.com/
Related Articles: Ashes: James and Fiona, Tabletop
Share
Tweet
Share
Submit