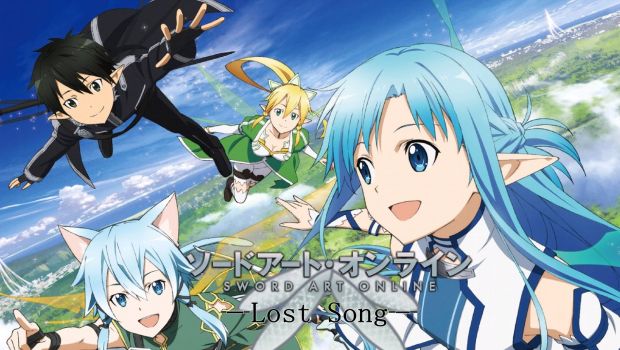 For those who might be unfamiliar with it, Sword Art Online is a popular manga and anime series which has been taking the genre by storm for the better part of the last two years. The focus of the plot shifts around quite a bit over course of the franchise’s several narrative arcs, but typically orbits the adventures of hardcore gamer Kazuto ( aka Kirito) and his girlfriend Asuna as they explore the worlds of Virtual Massive Multiplayer Online videogames. These VMMOs, as they are called in the story of SAO, are the newest breed of gaming, and run on state of the art headset consoles that completely transport a player’s consciousness into a virtual world, allowing them to physically feel and experience everything their avatar does.

Now I share the above information not just because I am a fan of the show (which I am) or because I am trying to sell you on it’s merits(which I’m not). It’s because in order to understand the lion’s share of Sword Art Online: Lost Song’s story it requires at least some familiarity with the work it’s based on; and that’s just for starters.

Highly condensed, the story of Sword Art Online: Lost Song is thus; after surviving a VMMO named Sword Art Online, where our characters were trapped inside the game for years and forced to fight for their actual, physical, lives, Kirito and his friends have decided to once again enter the virtual gaming world to see if there is still any “fun” left to be had there. Choosing the popular VMMO ALfheim Online as the new world they will explore, the group embarks on new gaming adventures in this Norwegian fantasy environment.

Indeed, if a player really wanted to “get” what was going on with the characters, the plot, and the world state of SAO: Lost Song even just thirty minutes past the title screen, they would need to watch the anime’s first two seasons, then forget 30% of it, play Sword Art Online: Hollow Fragment to completion, and then begin Sword Art Online: Lost Song. I wish that was an exaggeration, but it’s honestly your best bet since the game itself seems too pre-occupied telling it’s own story to bother catching you up what’s already happened.

This doesn’t exactly indicate that SAO: Lost Song is a bad game, because in several ways it’s a lot of fun. But it does point to how much it’s isolated itself within an ecosystem of hardcore Sword Art Online fans who are already voraciously gobbling up every bit of content they can find. This unintentionally elite approach to the game’s design bleeds down into all its other elements, often holding it back from it’s real potential.

Depending on how you meet your opposition, this Sword Art Online: Lost Song can feel similar to Dynasty Warriors. Many of the maps can quickly fill with endlessly spawning opponents.

Stepping away from narrative issues for a moment and moving on to the mechanics, SAO: Lost Song, as opposed to the franchise’s previous installments, has much more of an action role-playing game feel. Where SAO: Hollow Fragment allowed you to freely explore the world maps and towns, combat had an auto-attack system which could make you feel distant from the action. You would lock onto an opponent and the system would automatically spam them with attacks until you entered additional commands into your queue.  SAO: Lost Song actually has light and heavy attack commands and submenus for launching powerful Sword Skills and magic attacks. This makes action feel more hands on and personal, tremendously increasing the excitement behind enemy encounters.

In addition to the more visceral battle system, your party has increased from a two person partnership into a team of three, where you are free to combine into any assortment of avatars/characters you like. This greatly enhances the potential combinations of weapons, their associated Sword Skills, and magic attacks, making your encounters and victories even more satisfying.

The flight mechanics of SAO: Lost Song can become second nature with enough practice, and once they do your skills in combat and exploration will explode.

This brings us to the largest addition to SOA: Lost Song in comparison to it’s predecessors, which is the ability to fly. Just like in the anime, where the game the characters are inhabiting, ALfheim Online, is big deal because it’s the only game where a person can actually fly, incorporating a Y Axis into the mix could’ve easily spelled disaster. But as it turns out the flight mechanics in SAO: Lost Song quickly wind up feeling very natural. You wouldn’t think so at first with the number of buttons that do the same thing or how dramatically different commands change your character’s behavior,  but it all falls together once you figure out what your own play style is like.

Figuring out your play style also brings us to another aspect of SAO: Lost Song that should be celebrated, and that’s it’s impressive new character roster.

The list of personalities you can now inhabit is pretty substantial at over 15 different options, including the few unique characters introduced in the title’s post Hollow Fragment continuity. These new characters open up not just new ways to play, but different micro-interactions and dialogue over the course of your adventure.

Havings different characters to choose from also offers something nice to the multiplayer aspect of SAO: Lost Song. While this isn’t the type of game I personally enjoy playing with others, the time I did spend with this feature needed as much help as it could get.

All of Kirito’s girls are back, both old and new and newer still. However the ability to actually play as them this time around makes their unwavering hero worship of our protagonist much easier to stomach.

With no cooperative campaign feature, playing with friends is essentially just monster hunting. And since there also isn’t any native chat support outside of PSN itself, if you don’t have friends online to play with your party communication is limited to the speech bubbles and emotes native to the game.

As far as the visuals and sound, SAO: Last Song is more than a few steps above Hollow Fragment, but still a bit of a mixed bag. The animation and detail for your playable characters are considerably refined and true to the iconic personalities they are supposed to represent. But on the flip side the environments and background NPCS painfully lack anywhere near the same level of polish, which become harder and harder to ignore the longer you play. This discrepancy in quality stands out the most when it comes to the character generator.

When I reviewed Sword Art Online: Hollow Fragment, one of my largest disappointments was how the game started with you getting the chance to create your own avatar to explore the world of Sword Art Online, only to find out you are locked into the role of playing it’s protagonist Kirito and move along the rails of his pre-established world-state. In SAO: Lost Song Kirito is still the only perspective in which you get to experience the story, but the mechanics that allow you to change between the other characters and the narrative tone softens the blow.

It’s been years since I’ve encountered a character generator as rudimentary as the one found in SAO: Lost Song, even in comparison to the franchises own fledgling legacy. When the opinions are this limited it’s more likely to irritate rather than inspire you.

In addition, although it’s advertised as a feature, the character generator is clearly an afterthought, operating at many, many,many tiers lower than the one we experienced in Hollow Fragment, as bittersweet as that experience may have been. There are only two options for everything, and gender selection isn’t even among them since that is locked along with the race you select.

When the choices are so limited it’s hard to feel like you are being jilted out of forging the character you’ve dreamt of, since the chance was never really there. As you walk around the town in the 20 or 30 estimated hours it will take to complete SAO: Lost Song, you’re likely to see every combination possible, since NPCs share the same exact palettes and features you’re able to choose from when you unlock the option several missions into the game.

Although it’s a new aspect for the Sword Art Online universe itself, the addition of an idol singer is as played out as storytelling gets in anime. But for those familiar with both the anime and the videogames continuities SAO: Lost Song’s plot will reveal even more places where the two narratives diverge.

So in the end, Sword Art Online: Lost Song succeeded in building on what it started with Sword Art Online: Hollow Fragment, but didn’t exactly improve the experience. While some things were better, others were worse, the same, or removed altogether. The addition of flight is cool and gives the maps a different dimension to play around in, but the environments are so bland it really serves as a way to skip over the battles you don’t want to waste your time grinding through. And the action system, while immersive and well designed, can get bogged down when you realize you’re facing literally endless waves of respawning enemies who can just wear you down in the wake of their never ending torrent of attacks.
So while it may be  a fun distraction, and maybe even a must own for a Sword Art Online fan, as a game it’s really just an overwhelming ‘meh’. If and when the designers behind the SAO franchise decide they want to take even a little bit of a risk and create something that both  seasoned anime fans and Japanese video game lovers can get behind, it’s unlikely these titles will ever rise above mediocrity.

Sword Art Online: Lost Song, while polished in some areas and definitely a great buy for a fan of the anime, is only mediocre in it’s own right. Its solid play mechanics and interesting characters are quickly overshadowed by a convoluted and self-referential narrative that only the most dedicated enthusiasts of the franchise could really appreciate. If you are just looking for an anime-like title to spend some time with, better options are out there. Sword Art Online: Lost Song was really only built with fans in mind.

I've been a huge fan and critic of games and movies ever since I had a voice to speak about them. I love power and influence of great storytelling, interactive and otherwise, and now want to be more than just a consumer. My biggest strength in this regard? Almost every time, I'm fair all the time.
Related Articles: Sword Art Online: Lost Song
Share
Tweet
Share
Submit