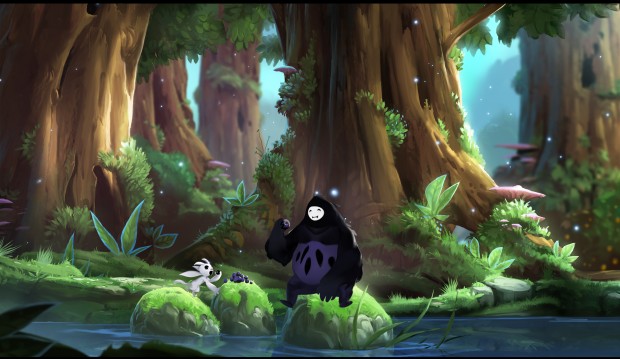 2015 was a year of surprises for me. Heading into this year, had you told me that my top 10 would consist of a new Guitar Hero, Batman, and Miyazaki’s latest creation, I would have deemed you to be terribly uninformed of my interests. On top of that, we had multiple sequels that came out and established themselves as more than just another bullet point in a franchise. If you are tired of playing through sequels, you got unique indie darlings, as well as new IP’s that broke ground. In 2015, there were options all over the place for varying interests.

From the heart-wrenching opening cutscene, I was hooked on Ori and the Blind Forest. After that, the visual design and detail that went into every character and environment was striking. There was also an upgrade system that had you consistently learning new abilities, in a MetroidVania sort of way. It didn’t do anything to truly revolutionize the 2D platformer, but it was clearly one of the best of the genre released in the past few years

Speaking of indie games that came out of nowhere, Dan Marshall’s The Swindle was highly anticipated by very few people, and just randomly appeared on PSN one week. This sounds like a recipe for disaster, but Marshall’s steampunk stealth adventure actually captivated many people’s attention as they battled through some seriously difficult heists in hopes of accomplishing the ultimate swindle. Unfortunately, that final swindle was incredibly difficult, to the point where it seemed unfair. It acted as possibly the one bad thing about the game, but it was such a major issue it became unavoidable. That said, the stealth elements built around the mechanics were fantastic, buoyed by some great gadgets that you unlock through making more money from heists. It was a brilliant, simple game that just plain worked.

Throughout the year, I keep an ongoing list of my favorite games. I do this so that when we get to this point of the year, figuring out my top 10 is very easy. Mortal Kombat X is one game I looked at towards the end of the year and thought “Wait, that actually came out this year?” Mortal Kombat X’s release seemed to die away very quickly, probably due to the poor PC port. That being said, the core fighting mechanics within the Mortal Kombat series are still great. The new cast of characters fit very well, and the story, while not as enjoyable as the previous, was fun to traverse through. Many people hail Street Fighter as the best fighting franchise around, but these last two Mortal Kombat releases have put it in front of the classic Capcom franchise.

The original Metal Gear Solid was one of my most memorable gaming experiences of all time. It was the first moment where I realized what video games could be. They could have cinema-worthy stories (looking back, calling MGS’s story cinema-like is hilarious), while also providing thrilling experiences trouncing around the different environments. Metal Gear Solid V was a wonderful game, and it featured some of the best pure action that I have ever seen in a game. The new reflex mechanic was brilliant, and is something I have missed in other stealth games. There was just an absolute load of content in MGSV, everywhere you looked something was popping off. That continued even with the menu system, as you managed your base and crew, making sure you were utilizing your resources properly. Kojima’s magnum opus was a wonderful final installment in one of the best video game series’ to ever grace the video game world.

I’m pretty sure I am the only one that enjoyed Batman Arkham Knight to this extent. I fell in love with the original, Arkham Asylum, but never found myself enjoying Arkham City. That changed with Knight, as it felt like the series had reached its inevitable pinnacle. Flying all around Gotham was a joy, as you took in every single glowing building around. The combat that changed third-person action games also found itself being utilized to its fullest extent. The combo system was still enjoyable, and some of the new tricks thrown in were welcome additions. The most enjoyable times in Arkham Knight came from enjoying its story, and how they concluded what seems to be the final Batman game developed by Rocksteady. While having Joker in the game felt forced, the final battle in Batman’s mind was an uncomfortable, equally unforgettable experience. And hey, that Batmobile stuff wasn’t all that bad.

Oh, Just Cause 3. You really have no clue how excited I was for you. The best thing in a video game is when you can just turn your mind off, relax, and watch the character traverse the world while maintaining a smile on your face. That continued in Just Cause 3, despite technical frustrations. Flying around with the wingsuit/parachute combination made getting across an open-world much more enjoyable than any fast travel situation. Then, of course, came the booming explosions, something that the game is entirely built around. While I don’t remember one particular detonation, the barrage of flames all around me continuously kept me enjoying my experience. I just love having fun, and few games provide that like Just Cause 3.

The success of Guitar Hero Live all begins with the brand new guitar, a revolutionary piece of hardware that propels the music/rhythm genre forward in a way that no one was expecting. The integration of things such as running up and down the frets, as well as bar chords, really give you a similar feel to actually picking up a guitar. It also leaves your fingers aching a bit, something guitar players are used to feeling. Pre release, many negative connotations were formed about the Guitar Hero TV aspect of Live, as it seemed to be nothing more than a micro-transaction death trap. Thankfully, that is far from the case as I have spent upwards of 10 hours in the mode, not having spent a dime, and I still hold over 20+ Play Tokens. Guitar Hero Live is a smart extension of what seemed to a waning franchise. It routinely succeeds as it strives to be something more than the music games we were playing four years ago.

I have never gone through my days thinking of a video game as often as I did with Her Story. You begin the game by setting behind a computer desk, and you conclude by doing the same. As you progress, you type in different words or phrases, and utilize a mid-90’s search engine to bring up videos from an interrogation. The lady within this interrogation, Hannah (played by Viva Seifert), is one of the biggest reasons Her Story works so well. Her performance remains compelling throughout, and never feels awkward or forced, something we see often with live-action video in games.

Weaving your way throughout Hannah’s story is not only one of the most enjoyable experiences of the year, it is one of the best narrative experiences I have ever had with a video game. I would constantly be racking my mind for different words to search for, in hopes of finding that one video I have yet to witness. While it may not be the best video game to release in 2015, Sam Barlow’s fascinating project is easily the most memorable.

Miyazaki video games have never been my cup of tea. I tried desperately to enjoy Dark Souls, putting over 50 hours into it, but was never hooked. Bloodborne changed all of that, in part due to what seems to be one of the most precise combat systems in ages. Dodging around and hunting for your perfect moment to strike brings about some of the most nerve-wrenching times in Bloodborne, but it is also one of the things that make it incredible. On top of that, the atmosphere is more vast and varied than in previous Miyazaki games, with sprawling forests and foggy dream states appearing at random intervals.

Of course, the enemy design is at its most horrifying after every lamp you reach. You look at these beasts and see absolute horror, as liquids ooze out of their crevices and limbs sprout from places limbs should not be. Satisfaction is such a difficult thing to achieve in video games, but Bloodborne did it after every boss fight. Admittedly, there were a few fights that seemed unfair (looking at you, Rom, the Vacuous Spider), but the inevitable feeling of success is just enough to make you power through them. After never being a “Miyazaki guy,” Bloodborne was the installment that got me hooked. Now, I just crave more.

As a person that loves horror movies, and pursues even the worst of the genre buried within Netflix, Until Dawn is something that feels like it was made just for me. The characters are campy, but lovable. Each one of them establishes their personality early on, and builds upon that throughout each scene.

Many people have praised Sam as being the most sane, likable character within the game, but Josh is the sleeper candidate for best character of the year. Rami Malek, now known for his starring role in Mr. Robot, gave a captivating, uncomfortable performance. He was motion captured for each of his scenes, and it shows as his facial expressions elicit emotion that simple vocabulary could not achieve. There is a certain scene around a few hours in, where Malek’s character experiences a mental breakdown, which is played expertly. In this type of cheesy horror story, delivering that scene is far more complicated than if it was a simple drama. You have to overdo it a bit, while also managing to compel the player and make him feel for the character. It’s a tough line that few people can walk, but Malek does it with ease.

Until Dawn is the kind of game that no one expects to breakthrough, but it somehow manages to surprise. Few games left me smiling as much as Until Dawn, despite the dyer circumstances you find your cast in scene after scene. It executes on the horror concepts it holds dear perfectly, and brings back memories of one the best horror films released in the past decade, Cabin in the Woods. The horror genre is a wonderful thing, and Until Dawn builds upon it well enough to produce the best game of the year.