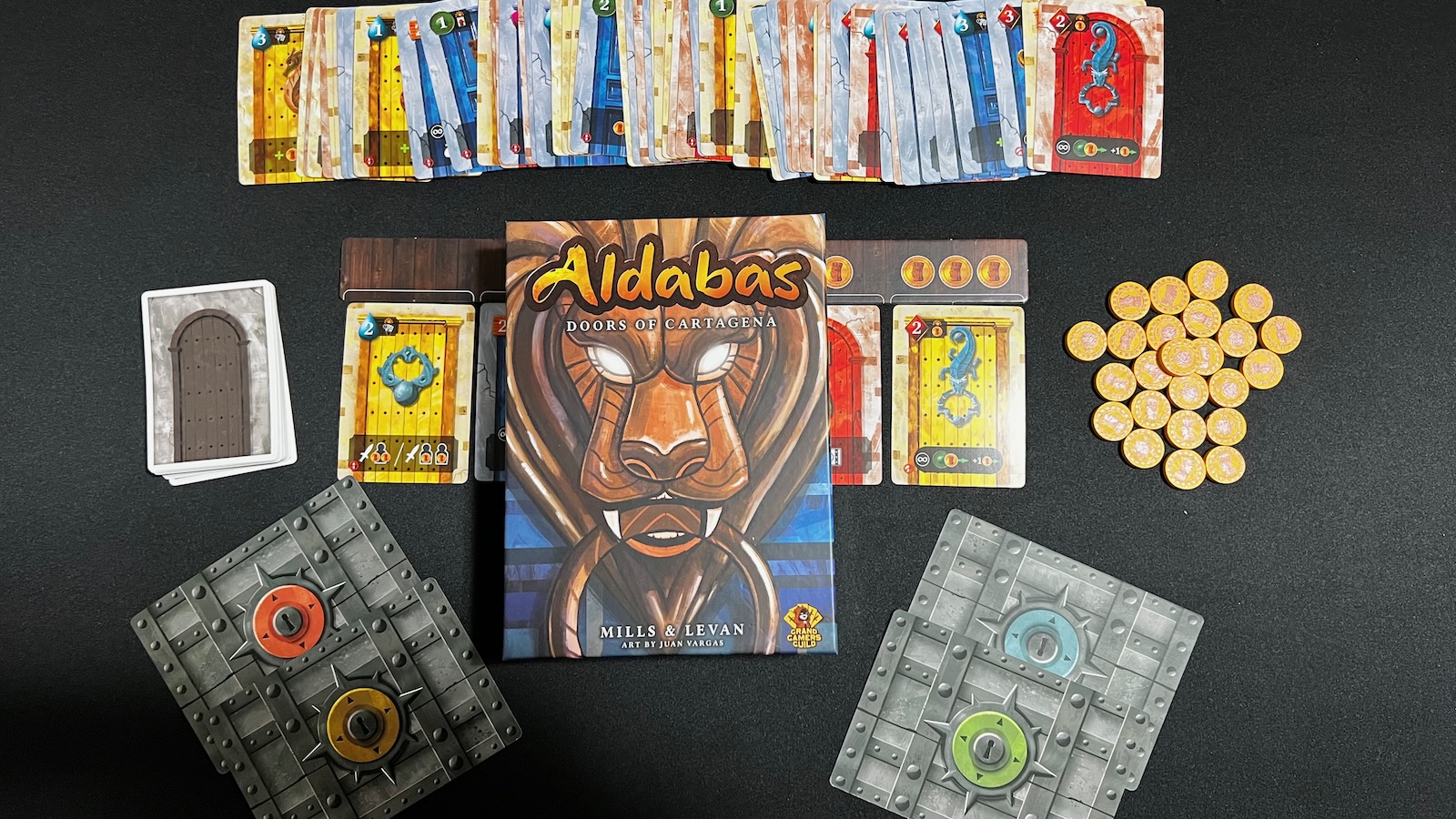 Columbia is known for many things in today’s day and age such as coffee, Pablo Escobar, and its door knockers? In colonial times, the door knockers of Cartagena, called Aldabas, indicated to the world your profession and social status. Aldabas takes the history of this colonial tradition and builds it into a tableau, engine building, and entertaining card game.

Aldabas: Doors of Cartagena is a brand new game from designers Nathaniel Levan and Joshua J. Mills and published by Grand Gamers Guild. In Aldabas, players are taking turns gaining coins, buying cards, and playing cards to a tableau. Each card has a “when played” and/or an “ongoing” effect that can give players benefits throughout the game. Each card is also classified by a different color and a profession. Players try to have the most influence with different professions by the end of the game for final scoring. Influence is denoted by a numeric value on each card. 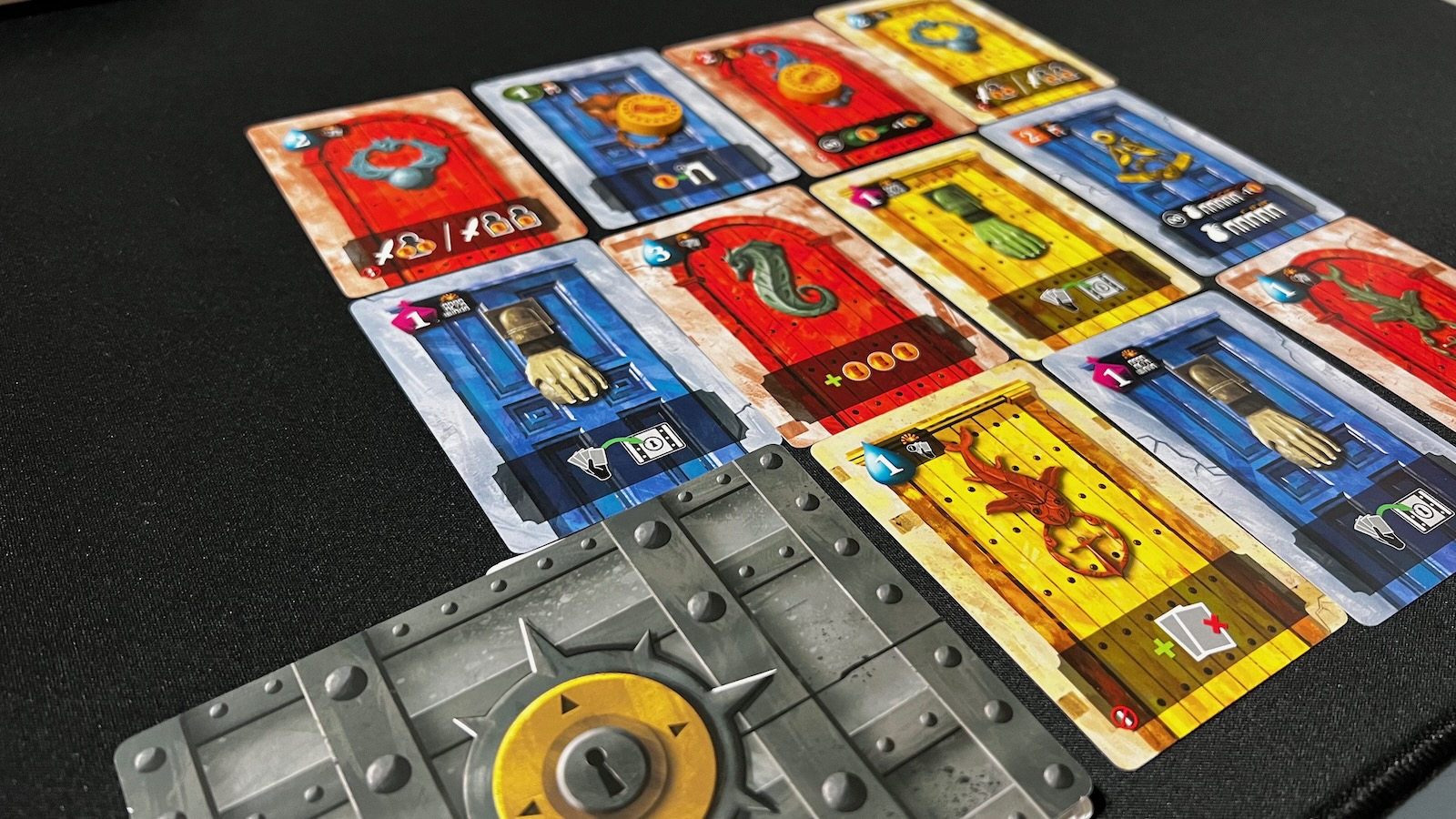 A completed block from the yellow player.

In the game, each player controls a vault and an imaginary 4×3 block where they can build their doors. Throughout the game, players can place coins and cards into their vault for safekeeping until the end of the game. When placing cards in their block, players must not have an empty space to the left or below the card and cannot place the same color doors next to each other. When placing a card in their block, players will activate the new card ability and the cards next them, in any order. This can allow players to stack abilities and maximize their turns. Card abilities are associated with one of the five professions.

Each of the professions in the game have unique end of game scoring conditions and card effects associated with them. 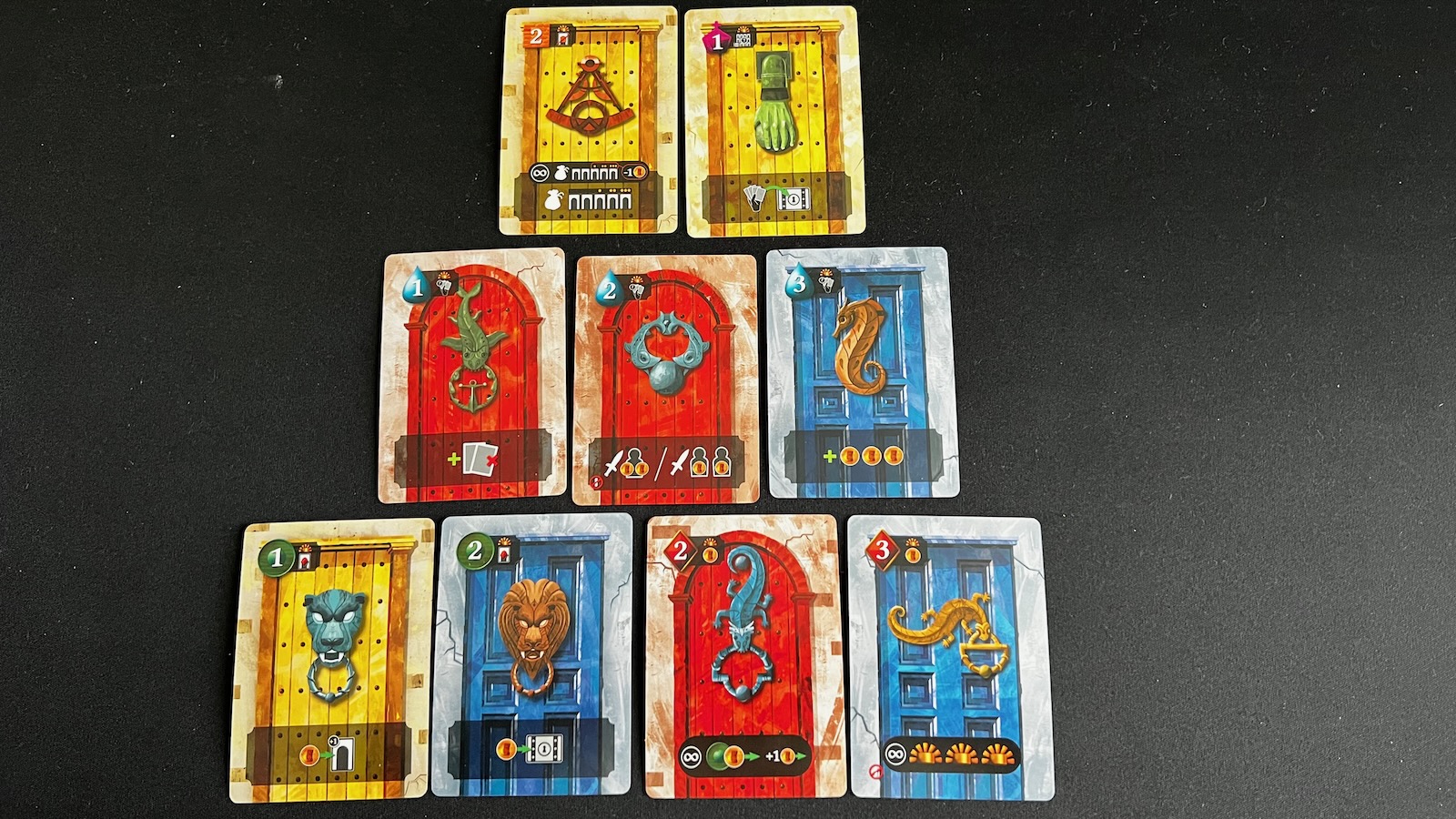 The Aldabas featured on the cards and all of the possible card abilities in the game.

Players will continue taking turns until the coins in the supply run out, there are no more cards for the dock, or a player fills their block. At the end of the game, players will get points based on their saved coins and buy scoring influence from the professions. Players can use their vault cards to help supplement their influence totals. Players, who have first and second place influence totals, will get to score the profession cards. 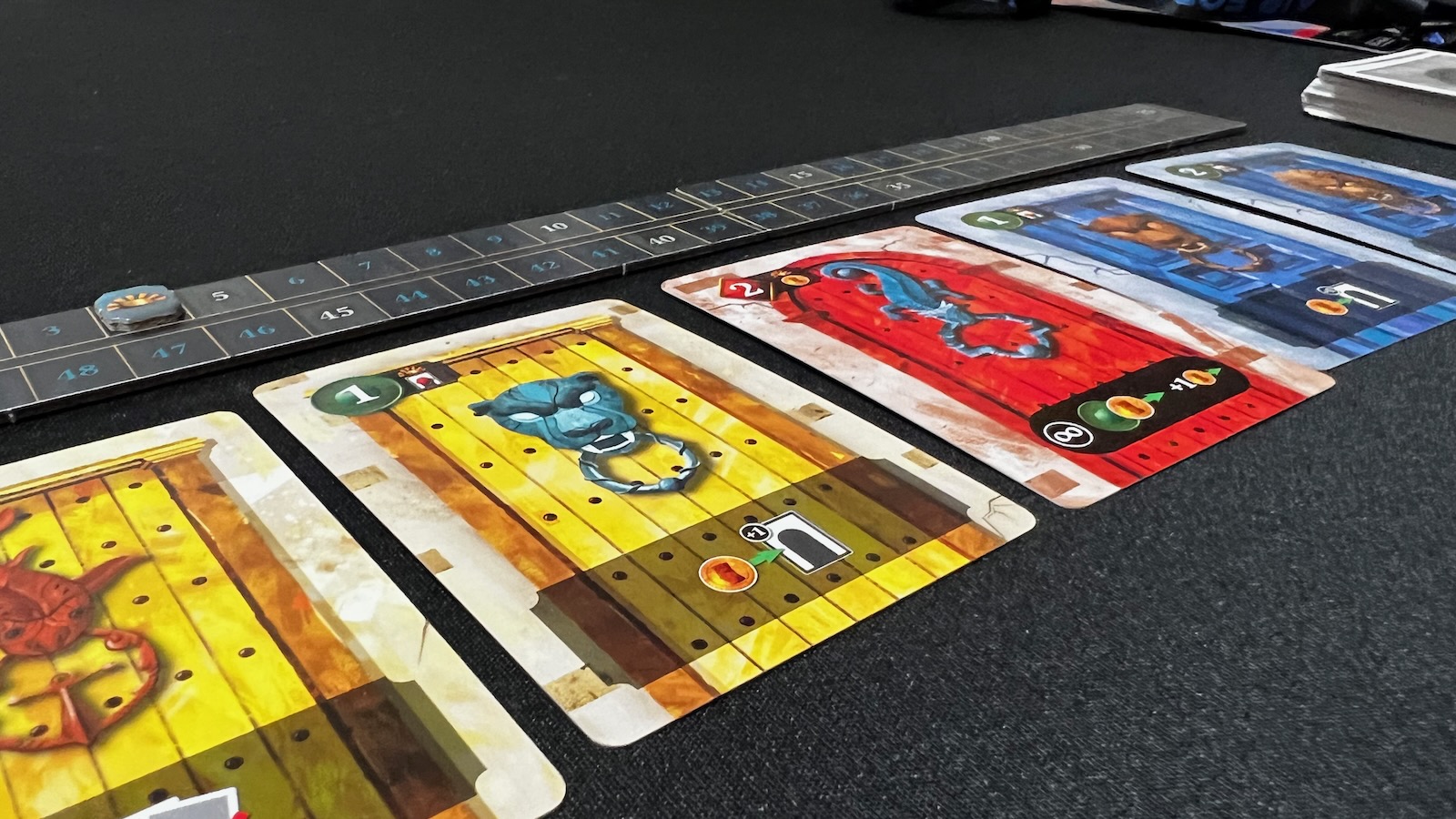 The dock board flipped to the final scoring side.

Aldabas includes a solo mode as well. In the solo game, you will play against a rival. The deck is whittled down to include two copies of each card. The solo player will remove cards and build doors to try and “out-influence” the player. Scoring at the end of the game takes place in the same way as the multi-player game. The builder can then compare their score to a ranking chart describing how your gameplay enhances the city of Cartegena. Also available is a mini-expansion that includes three new professions which players can add by removing all the Aldabas of one type and adding a new one in. 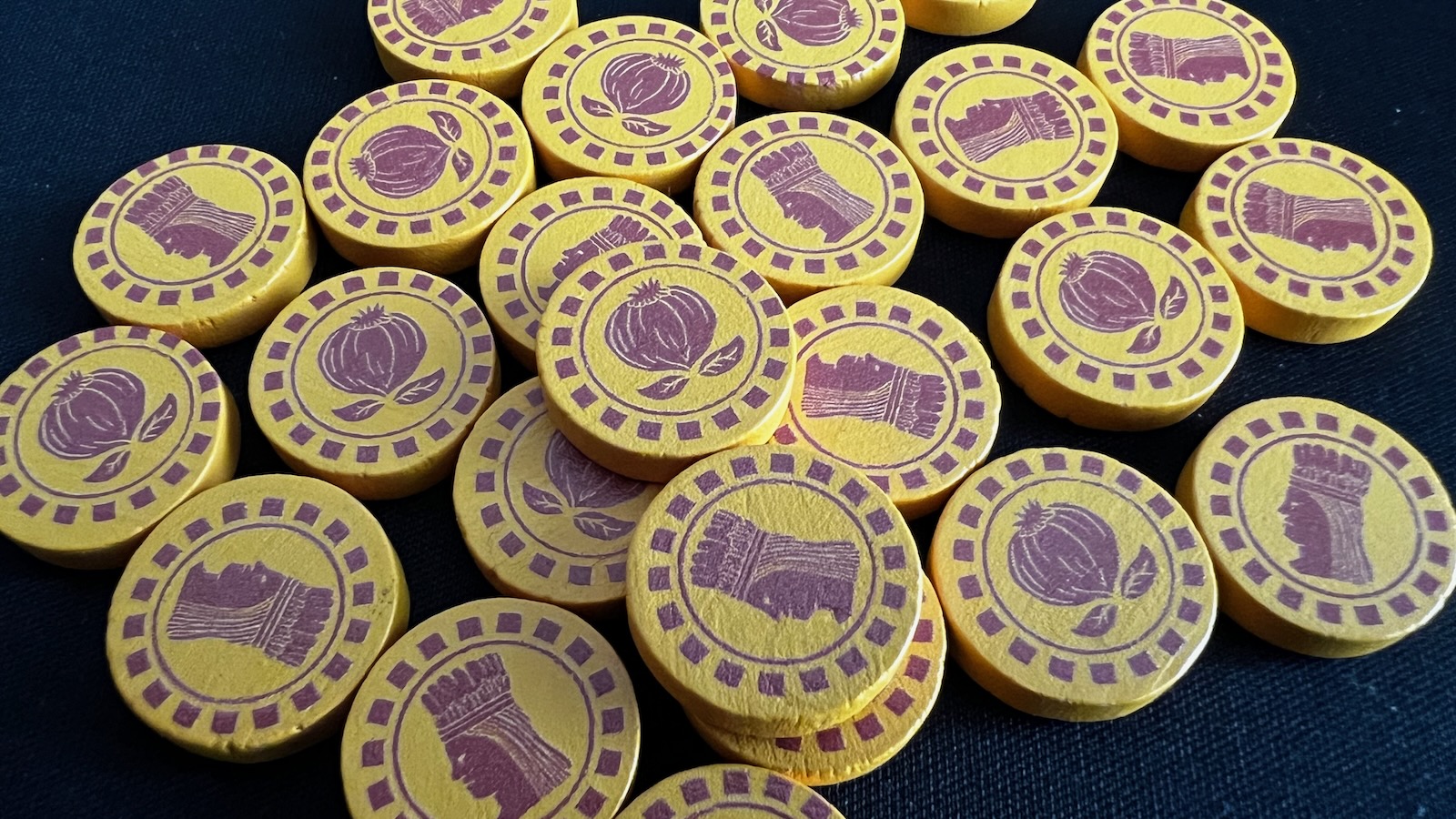 Wooden coins used to buy cards and earn points at the end of the game.

The components of the game are, for the most part, top notch. The artwork on the cards from artists Josh Cappel and Juan David Vargas pops off the high quality card stock. Each of the Aldabas on the cards are detailed and indicate different types of profession cards. The iconography is also easy to pick up after a couple of plays. Often in card games that need a lot of shuffling, you can see the wear and tear after a few plays. The cardstock used on these cards was almost too thick to get a good shuffle. The cards feel great in the hand and are easy to manipulate on the table. Also included in the game were wooden coins with screen printed images on each side. The wooden coins were a nice touch, but made the vault a little clunky when storing coins. We ended up just placing cards and coins on top of the vault versus under. The biggest area of complaint for the components was the dock board and scoring track. The dock boards came in two separate pieces and kept getting jostled around during the card refresh. The backside is used for the scoring track and the provided scoring markers were so tiny, they almost look like scrap pieces. The main box has enough room for a folded cardboard board that cards could lay on top of and would allow more room for larger scoring markers on the back. 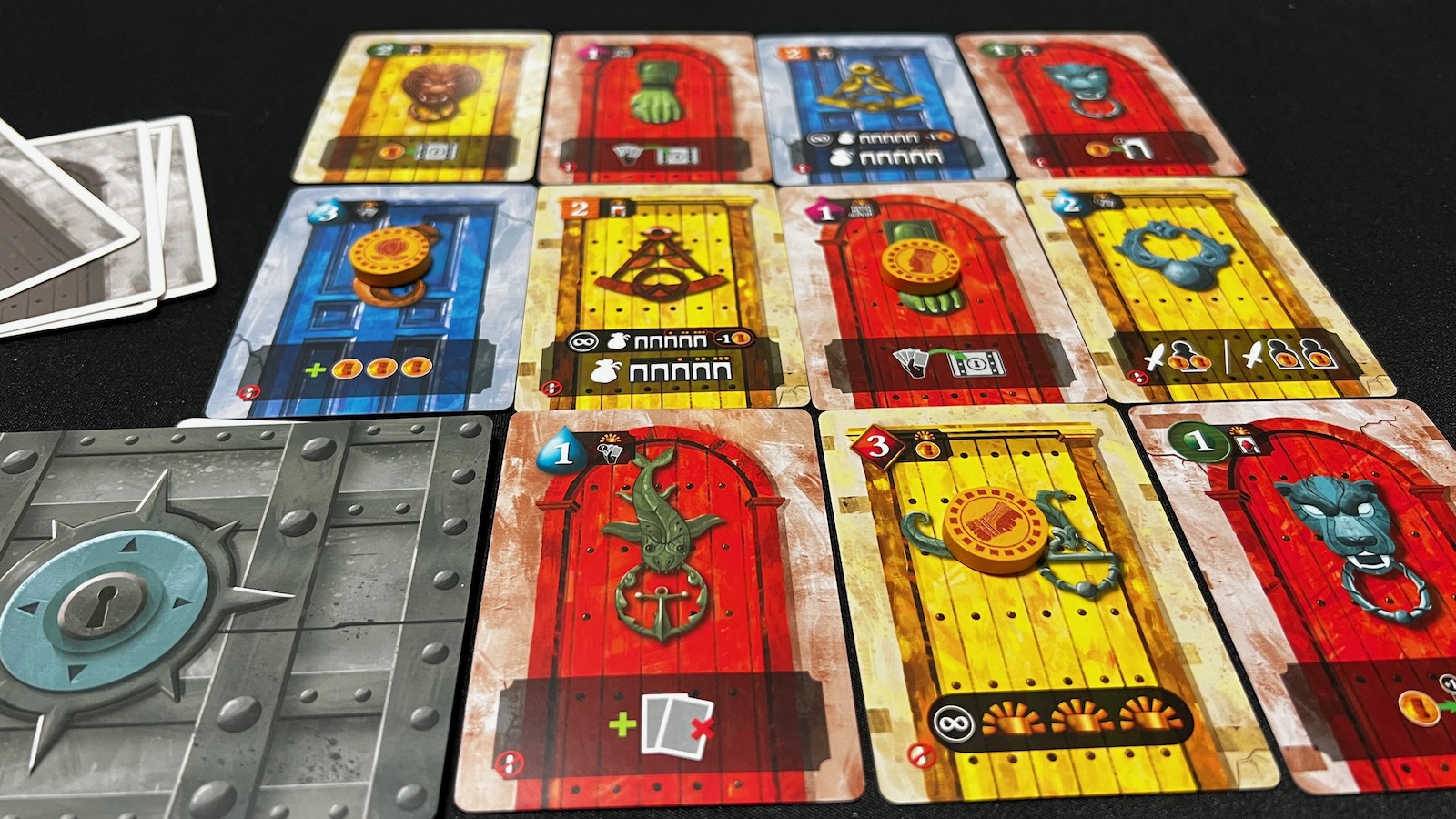 The gameplay of Aldabas is relatively light, but fairly engaging. Players must balance the actions to maximize points. Players have to constantly keep an eye on the blocks of other players if they are going after the most influence in specific professions. A well placed coin on a door can be the difference between getting the end game scoring points for a faction or not. Another fun component is activating adjacent cards when playing a new one and allows the players to strategize when and where they place specific cards. Activating cards in any order could mean a player gets the coins they need to buy a card and then store the extra coins in their vault for the end of the game. It is much easier to score every profession in a two player game, where you only need one card to play, than in a four person game where you sometimes need to focus on maximizing a couple of professions over others to get some of the big points. The solo mode was fine, but not something I would come back to as there is not a lot of excitement in a beat your own score type of game

A fun game that is pretty easy to teach to and learn for new players. The tableau building, stacking of card abilities, and the interesting combinations for end game scoring grab your attention and keep you puzzling the whole game. While it won’t scratch the itch for those looking for a deeper experience, Aldabas is a great starter or filler game for game night.

Dan is a newly married educator from Colorado. Growing up as an Air Force dependent gained him lots of new perspectives on the world and a love for making new friends, especially over a good board game. When not at school or playing a board game, Dan is probably at the gym or a local sporting event. Dan loves heavy euros, adventure, and living card games.
Related Articles: Aldabas: Doors of Cartegena, Tabletop
Share
Tweet
Share
Submit