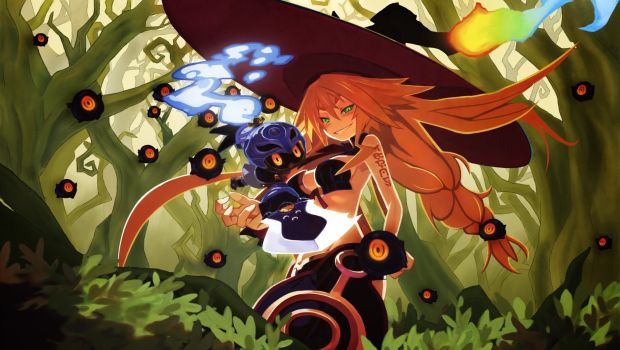 Ever since I heard the title and saw my first screenshot, I knew I was going to play The Witch and the Hundred Knight. The colors and art design were vibrant, the premise was charming, and even the worst of top-down J-RPG’s still resonate with a nostalgia intoxicating for any old-school gamer. So without much effort, The Witch and the Hundred Knight had already at least earned a chance with me. However that was still a far, far cry from earning my support. This title had the potential to disappoint in many more ways than it had to shine. Lucky for both of us, this swamp-spreading adventure was just my flavor of field mouse stew.

In The Witch and the Hundred Knight you play as the unique demonic familiar named…well, technically he’ll be named whatever you want, but he’ll still be called the “Hundred Knight”. As the Hundred Knight your mission is to spread the will of the swamp Witch Lia, (although you’ll refer to her as her preferred name Metalia if you know what’s good for you…) who when the story begins seems to hold an unexplained grudge against… well, the entirety of the world. Obsessed with her dreams of vengeance and domination against those who surround her, Metalia charges Hundred Knight with the mission to spread the swamp ooze that she is trapped within so she can personally visit devastation unto her other Witch rivals and their followers. Thus, Hundred Knight must slash and spell his way across the world of Madea, and complete the various tasks assigned by his bloodthirsty master.

Now just to be clear, as cute, colorful, and quirky as The Witch and the Hundred Knight may be, you are playing the villains. Your job is to (albeit adorably) kill, burn, and rampage your way to victory, clearing the path for Metalia’s sociopathic desires. While it’s hinted early on that there is more to Metalia’s impulses than simple insanity, that doesn’t change the portrait of macabre hilarity this title paints along the way. Watching Metalia literally kick her bested enemies when their down, all the while dropping barely “bleeped” F-bombs and cackling to the sky was surprisingly entertaining and a large part of what kept me invested. This is primarily due to the voice acting talent of Sarah Ann Williams and the rest of the English actors who succeeded in  capturing The Witch and the Hundred Knight’s humor. Primarily due to my Anime background, if I play a game with a Japanese voice track I find myself switching it on along with sub-titles, but with this game once I went with the domestic tracks I never looked back, and that says a lot.

Beyond the spoken word however, The Witch and the Hundred Knight boasts a wonderfully arranged score and soundtrack that manages to be elegant but not tedious; a difficult chord to strike in hack-and-slash games whose primary design challenge is balancing their innate redundancy. It wasn’t long into my experience with this title that I found myself wanting to own the soundtrack, despite whatever conclusions I came to about the game itself.

Speaking of the game itself, The Witch and the Hundred Knight straddles the line between complex and convoluted, and as with any RPG (and J-RPG’s in particular) these are the details that the devil lays within. Hundred Knight can wield up to 5 weapons, which in total make up his combos and the pattern in which they fire from first to last. This part of the gameplay adds a clear and immediate strategy to battles, as different weapons have considerably unique attack areas, powers, and properties that can make all the difference on the field. An enemy who falls quickly to a blunt hammer strike will all but ignore a sword slash and so on.

However the other sub-systems and categories of the game are a lot less straight forward, and The Witch and the Hundred Knight doesn’t do a particularly good job explaining its mechanics consistently, if it does at all. Even though most of your abilities are locked until you reach certain story related obstacles, and at which point you can backtrack to collect what you may have missed, as the game becomes more difficult it can become frustrating when you’re certain you’re not playing to the best of your ability due to unclear direction. Even though this can be said about countless games, The Witch and the Hundred Knight’s cut scenes and tutorials sections can be considerably long… and when you come out the other end unconfident you know what you’re doing or if what you want to do is even possible yet, you might find yourself in the midst of a rage-quit or power-leveling stint trying to figure it out. A lot of your most useful information is shared via the loading screen slides, one of which even suggests simply reading their 50-plus pages of content to fully acquaint yourself in the ways of being a demonic familiar. While certainly a functional solution, I find it unlikely many players are going to want to put themselves through an online wiki’s worth of content for a game that is ultimately founded on “press Square repeatedly to attack”.

Outside of not-knowing what you’re doing, The Hundred Knight is a delightful button-masher. The controls are sharp and responsive, making cutting down swaths of enemies and racking up bonuses is a real delight, all the while containing just enough strategy and danger to keep it from getting boring. If you think that there is “one combo for all”, even low-level opponents may wipe the floor with you in the blink of an eye and send you spiraling back to your last spawn point. It’s a rich and well crafted balance that is found far less often that it really should be, and is refreshing for this genre.

The Witch and the Hundred Knight is a great buy for fans of top-down J-RPG’s. It’s devilish without being dark and colorful without getting saccharine, and that’s an excellent formula for a good time. While the more in-depth elements of the game are less user friendly than others for a hack’n slash, this complexity guarantees various levels of mastery and reward for hardcore players. By just about any measure, this isn’t a game you’ll regret owning and a bucketful of sinful laughs.