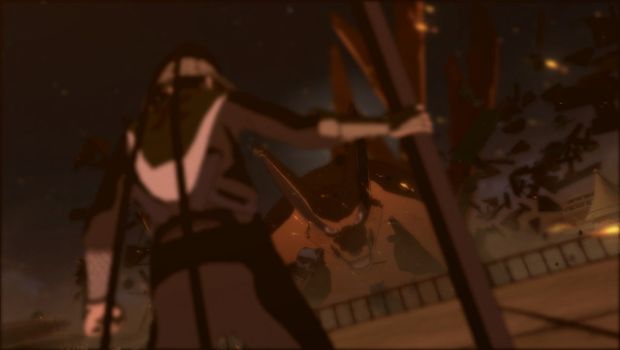 Having created 14 various games in the Naruto universe, including the four that make up the “Storm” series, it’s safe to say that developer CyberConnect2 knows something about bringing the action and melodrama of the Naruto anime series home to its fans. Now, six months after the release and success of (deep breath) Naruto Shippuden: Ultimate Ninja Storm 3, the creators have decided to sweeten the pot with the retail pack/DLC  (deeper breath) Naruto Shippuden: Ultimate Ninja Storm 3 Full Burst,  which adds more missions, costumes, a campaign chapter, and other goodies into the mix.

As one would expect, the third installment of the Ultimate Ninja Storm series takes what worked in the second and improves upon it, adding more characters, items, and features which enhance your combat strategies and create more rewarding conflicts. The graphical style and fluidity of animation makes it among the best show-to-game adaptations yet, perfectly mimicking the content it’s based on. Like Ultimate Ninja Storm 2, UNS 3 Full Burst includes animated and remastered QTE sequences to shake up the gameplay and capture the drama of the scenes. Many of these sequences transition seamlessly and will take you off guard if you think a cutscene is a chance to take a breath. This diverse design results in something more comprehensive than your typical fighting game of this style, granting players a deeper immersion into the ninja world of Naruto Uzumaki and his companions.

The weaknesses that UNS 3 Full Burst does have, however, can be glaring at times. While innovative in certain respects, it never feels as organic as other fighting games. UNS 3’s structure of fast action strategy doesn’t leave a lot of room for improvisation, partially severing that sense of fusion fighting game players feel with certain characters or styles. Your attacks are restricted to two types, ranged (shuriken, kunai knives, or other character based projectiles) and melee, which each have a pre-set combination of strikes. These routines can be altered slightly with a flick of the analog up or down, but the end result is nearly identical since they can not be strung into different attacks of the players own design.

When these torrents of martial aggression are thrown against the game’s two defensive options, namely the recharging substitution techniques and basic guard, it’s a matter of managing your resources. Substitutions instantly remove your character from danger and position them behind your opponent for immediate counter-attack, but can also backfire if your foe reacts more quickly than you and simply redirects their barrage. Guard, unless you’re struck from behind, will defend you against all but the strongest attacks… for a time. If a fighter turtles too long and suffers too brutal an assault their guard will be broken, making them immediately vulnerable.

This comprehensive system doesn’t present any real problems until both of a player’s defensive choices have been exhausted. When the substitutions are spent and your guard was either thwarted or broken, a character can quite literally spend the rest of the round being pummeled without any hope of victory. This disparity worsens with characters who already have natural advantages over one another, and can crush their enemy’s defenses before even touching their deadly chakra fueled trump cards. The result can be extraordinarily frustrating battles where you spend the majority of your health bar being juggled helplessly in the corner of the ring, or doing the same to your opponent, leaving your victories feeling empty.

That is of course when you can actually see what’s going on. The downside of 360 degrees of epic- ninja- fighting- action is that, not infrequently, you can lose yourself in the various frays, particularly the Mob battles. These fights which pitch your controlled character against rooms full of enemies, while still fun, can be difficult to control. This is mostly due to the nature of the camera, which doesn’t always stay with your character. In the midst of powerful ninjutsu attacks, lighting fast evasions, tumbles and flips, it’s easy to find yourself confused and at your opponents mercy.

Ultimate Ninja Storm 3 makes it very clear there’s a specific way it wants to be played. Sure, there are plenty of times when enough button mashing will see you through, but real mastery of the UNS 3 relies on you learning what’s already been set in front of you. The style you learn is really the style of whatever character you pick, not what you develop. While enjoyable in its own right and true to the series, some players might find the lack of flexibility a problem.

This is really where the Full Burst content shines. Since Ultimate Ninja Storm 3 is so content driven, more content is exactly what it needs to even out the experience. Where the Ultimate Adventure campaign may be too jarring for non-fans, and the online or regular versus modes may seem unbalanced, the Challenge series allows for a player to engage in a nice blend between the two. With 100 missions of varying difficulty to face down, its inclusion smoothes out whatever complaints I had about the original release.  While Naruto Shippuden: Ultimate Ninja Storm 3 is a very fun game to play, the Full Burst edition is the one worth owning.

Naruto Shippuden: Ultimate Ninja Storm 3 Full Burst, at its core, will always be a love letter to the fans who made the anime series the success that it is. But this newest edition really makes it a standalone title attractive to fighting game enthusiasts across the board. With an excellent collection of game options, enjoyable novelties, and low price point; it’s among some of the best video game choices you could make this year.