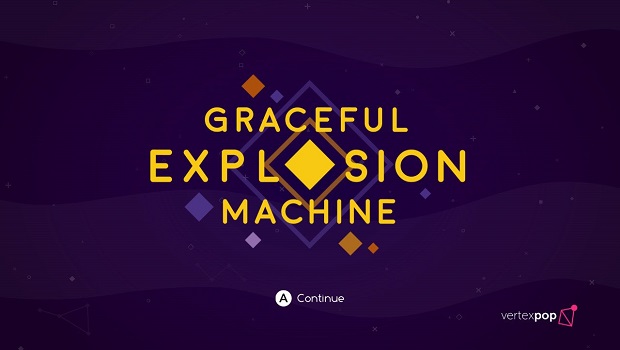 The arcade shoot-em-up is a timeless genre that transcends generations of video games. Twitch-like reflexes and challenging enemy patterns are the name of the game with these games, and current generation consoles can beef up the graphics to create a cool-looking battlefield. Vertex Pop’s Graceful Explosion Machine aims to invigorate the genre for the Switch, and it does so beautifully. Snazzy visuals and some of the most innovative mechanics in recent memory make this title worth its price tag.

Graceful Explosion Machine tasks you as a spaceship trying to defeat enemies across four different planets. Your main weapon is a peashooter blaster, which can be used as long as it doesn’t overheat (which occurs if you keep shooting without pausing). Early in the game, you’re granted your full arsenal: an energy sword that acts as a 360-degree shield attack that can negate enemy bullets, a sniper wave gun that can zero in on one enemy with quick ease, and homing missiles that can destroy nearby enemies. Each weapon is assigned to one of the four face buttons. However, unlike your main blaster, these weapons deplete a shared energy meter that must be replenished by defeating enemies to use. It’s a fine balance between using your primary and secondary weapons, as you can’t continuously mash one button to beat a level.
Each of the four planets are divided into nine main stages, with three waves of enemies filling your screen. You can freely control your ship across the screen as it wraps around the stage. Reminiscent of Defender or Geometry Wars, you’re going to have to dodge enemy fire to blast them to smithereens. However, this is easier said than done; each enemy has its own weaknesses and resistances. For example, the green pill bug-looking enemies are cannon fodder to your blaster, while a bigger blob creature can only be dispatched with the wave gun. While easy to tackle with individually, you’re constantly up against a few enemy types at any given time, so knowing what weapon to use is the key to success. New enemy types are introduced once every few levels, giving you a sense of progression and some paranoia at how to deal with new obstacles on the fly.

In space, no one can hear you scream…
With joy!

While mastering weapon types is a good start, you’ll also need to work with movement to get the optimal score. Multipliers are granted with each enemy destroyed, but it resets after mere seconds of not destroying another enemy or bumping into an enemy or bullet. In addition, you have a chargeable dodge move that can push enemies away from you, causing an opening to escape. However, this move doesn’t prevent enemy bullets from colliding with you (only the sword attack can negate them), as well a select few enemies that are impervious to this technique or lasers that are environmental hazards. Usually when a game employs a dodge technique, it’s the other way around, so it’s a refreshing, if jarring, change of pace.
This is probably where the brilliance of Graceful Explosion Machine lies. Each level is a constant battle of using the best weapon for the situation while also making sure you don’t get caught within the swarms of enemies that are invading. Dodging fire can only get you so far with your score as you’ll have to keep shooting in order to increase that multiplier. It’s an exhilarating sense of euphoria to constantly be in danger of dying only seen in bullet hell shoot-em-ups, and I enjoyed every second of it. The game is forgiving, however, as your ship can take three hits before perishing, and there are power-ups that can replenish lost health periodically.

If you can survive three waves of enemies, you complete the level and are assigned a grade, with S being the highest. These score requirements are challenging but attainable with practice, so you won’t be done with a level after you beat it. It helps that levels are only minutes long, so you can easily hit the restart button and try again. Additionally, there are online leaderboards that will provide some competition, so you can keep playing levels in order to dominate. Once you complete a world, you’ll unlock bonus stages that include an ultra hard version of the planet you explored plus a score attack that tasks you with building a multiplier throughout all of the world’s stages. It’s the little things that make the grind to a better score addictive and entertaining. There were some levels where I kept getting destroyed by new enemy types, but careful planning and some sharp maneuvers shot my score up tens of thousands of points as I learned enemy patterns and how to deal with each one. It’s a learning experience that rewards experimentation as well as reflexes.

Each S grade is worth it.

The presentation of Graceful Explosion Machine is hearkened to a futuristic minimalist chic. The neon colors and vector backgrounds suit the action just fine, and while the soundtrack and sounds aren’t anything to write home about, they’re reminiscent of 80s arcade games and complement the snazzy visuals quite nicely. This might not be the most graphic intensive game, but it shines beautifully with the Switch’s technology.

My time with the game was almost universally fluid, but I did personally experience a couple of performance problems when I played the game docked. The framerate dip is slightly noticeable when there is an exceptional amount of enemies on-screen, but fortunately the gameplay is still solid and didn’t really affect my perception of speed here. Still, it can be slightly annoying for the shoot-em-up purist who relies on lightning-quick response times.

Graceful Explosion Machine is the perfect arcade style shooter, and one of the best Switch games available right now. Its fluid, addictive gameplay and flashy yet minimal visuals pair well with a variety of challenging enemies, and it’s great for sessions lasting for a few minutes or a couple hours.

Elisha Deogracias is an aspiring accountant by day, freelance writer by night. Before writing for Gaming Trend, he had a small gig on the now defunct Examiner. When not being a third wheel with his best friends on dates or yearning for some closure on Pushing Daisies, he's busy catching up on shonen manga and wacky rhythm games. Mains R.O.B. in Smash. Still doesn't know if he's a kid or a squid.
Related Articles: Graceful Explosion Machine
Share
Tweet
Share
Submit