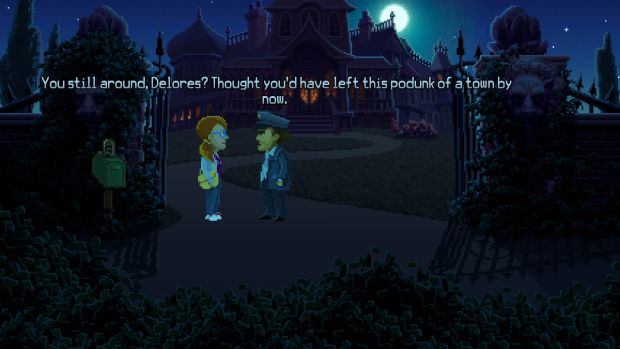 Point-and-click adventure games are in a weird state, where every new game is supposed to be the one that brings the genre back from the dead. New games in the genre typically remove old mechanics like inventory puzzles and combining items in favor of just telling a story with some semblance of interactivity.  Thimbleweed Park, the new game from adventure game legend Ron Gilbert, instead feels like a deliberate throwback, with all of the old, occasionally obsolete mechanics as well as a pixelated aesthetic.  As a result, while Thimbleweed Park is a treat for the nostalgic, it probably won’t reach anyone who isn’t already a fan of the genre. Newcomers won’t get a lot out of this experience.

Thimbleweed Park begins with the murder of a character you play in a brief tutorial sequence and continues at a fairly rapid pace.  From there, you’re introduced to the game’s two main protagonists: Ray and Reyes, two government agents with suspicious motivations.  While you’ll spend a good amount of the game playing as these two, as they’re the ones driving most of the plot, they’re probably the least interesting characters in the plot, acting like Mulder and Scully without the sexual tension.  Luckily, they’re surrounded by interesting and eccentric characters to play straight man to, leading to an experience that feels like Twin Peaks by way of Maniac Mansion.  Like Twin Peaks, it’s also a mystery that will keep you guessing.  There a lot of questions you aren’t given explicit answers to, but the mysteries are all ones you’re given enough information to figure out.

While they serve an important role as the straight men to Thimbleweed Park’s strangeness, Ray and Reyes are the least interesting characters in the game.

The other three characters are much more fun to play as. Ransome the clown, for example, is an insult comic whose once-promising career was cut short when he was cursed for insulting a gypsy woman.  There’s also Delores, an adventure game programmer, and her father, Franklin, who happens to be the only character with different gameplay due to the fact he’s been dead for some time.  As a ghost, he can’t interact with objects in quite the same way, and as such has a different series of commands.

Speaking of commands, Thimbleweed Park uses a system that will be familiar to fans of LucasArts’ classic adventure games.  You select a command from a menu, then the object you intend to use it on.  While this system feels a bit archaic, especially since the majority of commands could easily be replaced with “use,” that’s kinda the point. Thimbleweed Park is meant to replicate the classics, though there are quite a few differences from what you’d expect from LucasArts.  The jokes, for example, are a bit more mature, ranging from dealing with an incompetent pothead at a convenience store to Agent Reyes mistaking an informant for a lady of the night.

Don’t worry about what happens to Ransome. He probably deserves it.

On that note, a main point of whether or not you’ll enjoy Thimbleweed Park just comes down to whether or not you find its particular brand of humor funny, and that’s my main problem with it.  While Ransome’s sections of the game consistently made me laugh, mostly because he’s such an unapologetic bastard, I don’t think I laughed when playing as any other character. There are also quite a few running gags that wear out their welcome quickly, like a pair of plumbers in pigeon costumes who end most sentences by telling you to watch out for the signals.  Other gags just aren’t funny in the first place, like the fact that every other character in the town seems to be the same man, with the only major difference being a different annoying verbal tic for each one.

A lot of the other jokes come from references to classic adventure games, especially when you’re playing as Delores.  For example, there are collectable specks of dust that don’t do anything other than serve as another thing to gather for 100% completion.  Given that each one is just one pixel in size, this is a pretty obvious reference towards pixel hunting, one that will be lost on people who don’t play a lot of classic adventure games. It’s a pretty funny joke, more so than the few that do little more serve as blatant references to other games, like cameos from the cast of Maniac Mansion and Day of the Tentacle.

Franklin’s been dead for a while, and as a result his gameplay is probably the most varied and interesting.

The puzzles are well constructed, which can probably be attributed to Ron Gilbert’s famous hatred of the asinine “drop a gum wrapper on the floor to open a trapdoor” puzzles that plagued a lot of nineties adventure games.  If the lack of real puzzles in modern adventure games is something that bothers you, you’ll be pleased to hear that the majority of your time in Thimbleweed Park will be spent combining, trading, and using inventory objects rather than in conversation.  A few had me scratching my head at times, but there aren’t any puzzles that can’t be solved by examining the area and thinking about what you see.  Franklin is a lot of fun in this regard as well, as his ghostly form means that he frequently has to find other means to interact with the world.

Thimbleweed Park is a game that was created with a specific audience in mind, and that audience is adults who grew up on classic LucasArts adventure games.  If you’re part of that audience, you owe it to yourself to check it out.  If you aren’t, there really isn’t much for you here.