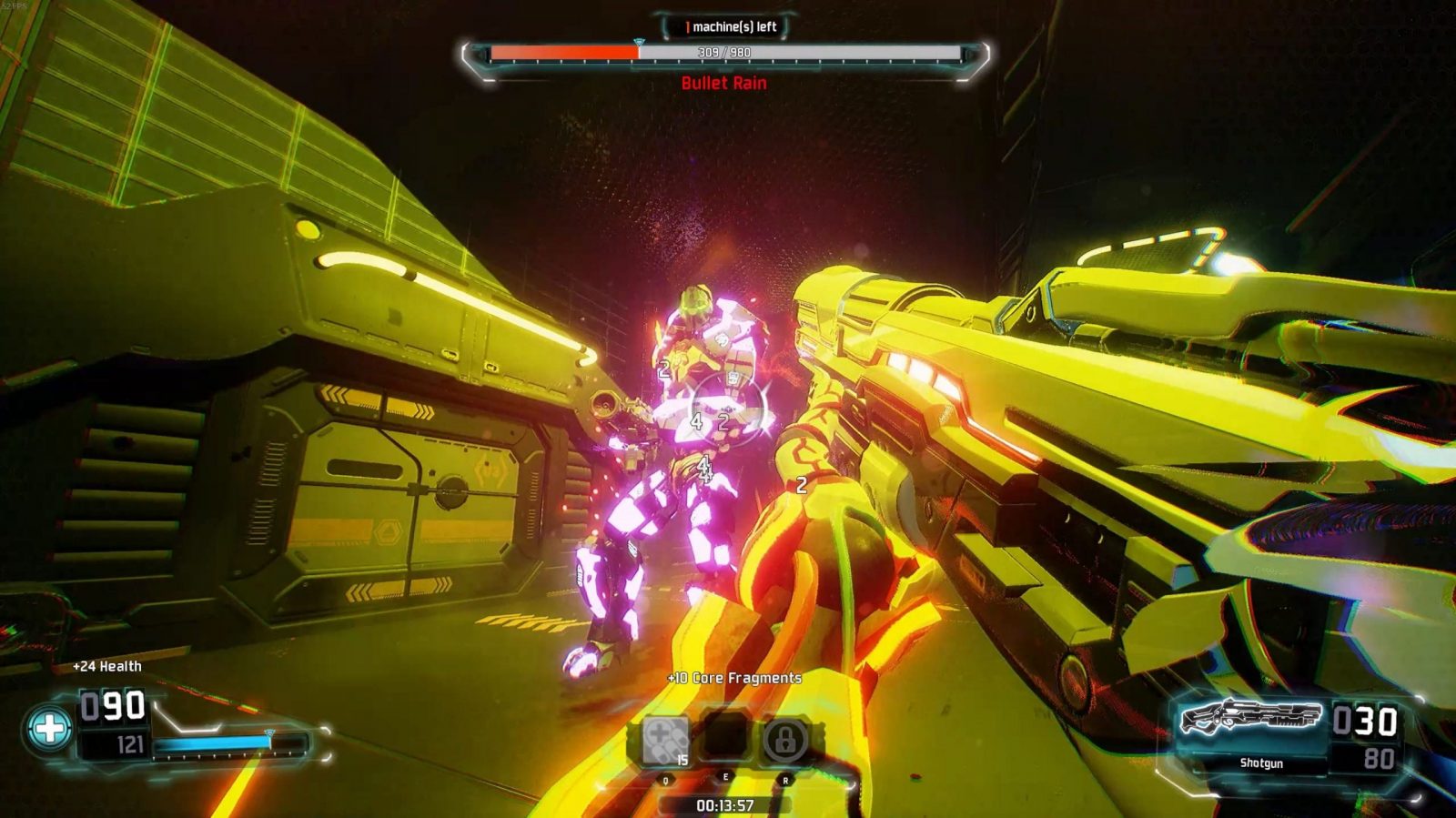 PositronX is easily Scorpius Games’ most ambitious title yet. From publishing TankYou! — a twin-stick arena shooting game — to developing I Shall Remain — a post-apocalyptic action RPG — Scorpius Games have delved further into the action shooter genre to come up with PositronX. PositronX is a futuristic FPS title that follows in the footsteps of shooters in the past, yet contains a unique twist. What’s that twist, you ask? Well, it’s a rogue-lite.

Before I delve into the gameplay, let’s talk about the basic elements that make up this title. PositronX has a procedurally generated layout, meaning you will absolutely run into the same stages as you get through the game, but they may not always be in the same place as other playthroughs. Even though there are no more than 4 levels, it adds an additional challenge and keeps the gameplay fresh since you can’t plan for your playthroughs. 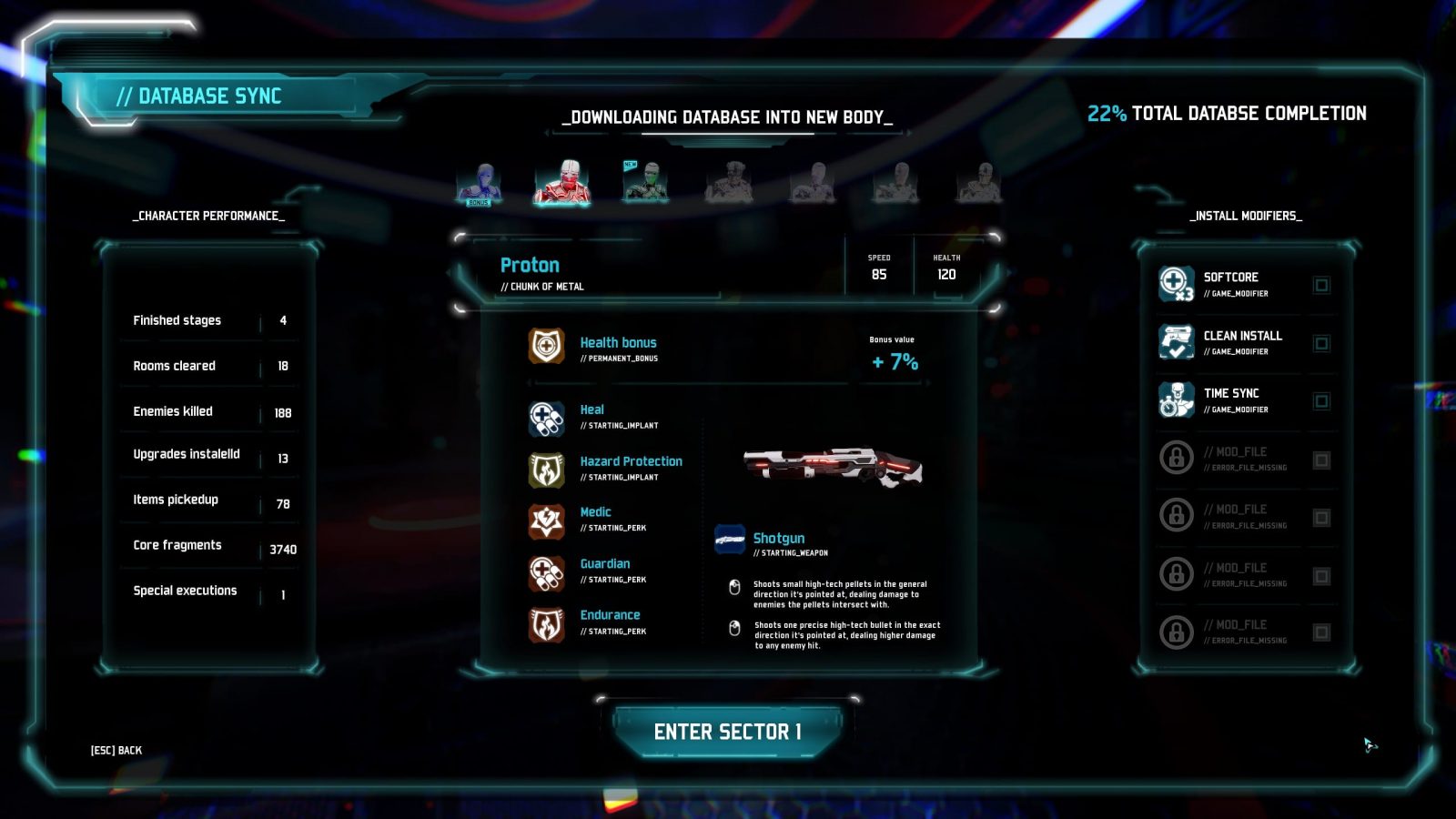 Choose this guy, you can’t go wrong with a character that heals and has a shotgun as their base weapon

There are 17 guns to use, ranging from an Energy Rifle to a rocket launcher, and even a gun that shoots disks. There are a total of 25 enemies or “Machines” to versus, and they all have a range of abilities to use against you. They’re all incredibly deadly, so I’d recommend that you keep as much distance as possible between you and them, and of course do not stop moving. If you stop, you’ll probably get blown up by a Roller, which… ah… rolls around and blows up. You can also unlock different characters to use called Positrons. These Positrons have different abilities and starting weapons, as well as a large number of passives that could mean the difference between life and death. I’d recommend that in your playthroughs you focus on designing your build around getting a healing boost wherever you can, and using a Positron like the Proton that has an ability that does just that.

Before I get critical, I will say that this game is a ton of fun to play. There are issues that I’ll address soon that complicate the gameplay, but ignoring that for now I really enjoyed every minute I spent taking on the Machines and navigating through the levels. The base gameplay is really fun and it’s incredibly satisfying dodging and weaving through a shower of bullets. The level of multitasking that you have to manage may be a challenge, but it sure is a satisfying and rewarding one. 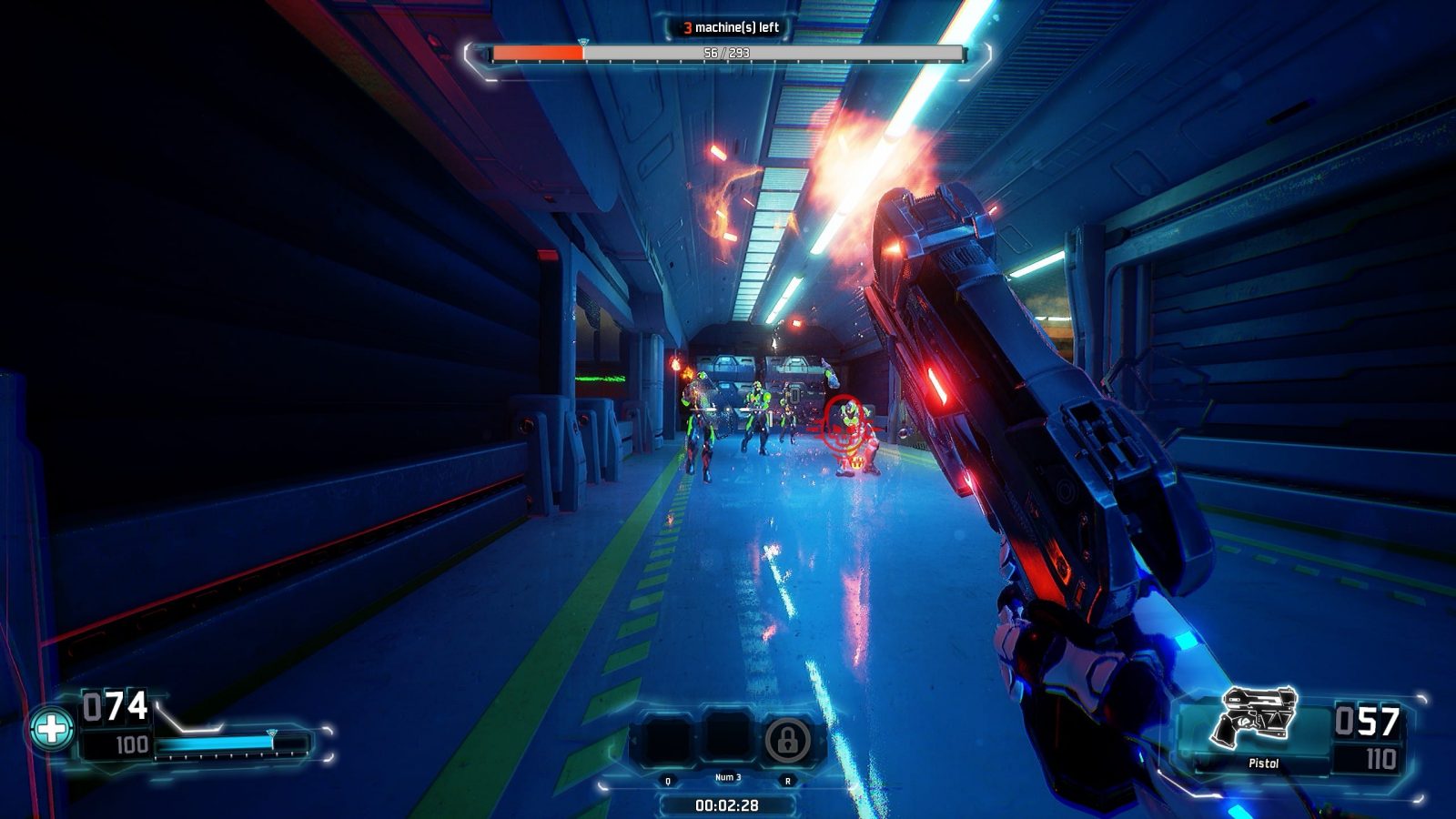 The gunplay is fantastic, has to be the best part about the experience

Since it’s a rogue-lite, each time you play through the game you’ll need to re-unlock guns that you may have acquired through a playthrough. So, you might finally have acquired the energy rifle, and are shooting and killing bad guys with ease, but the moment you die you’ve gotta hope you’ll get it in your next run. This also happens with other items called Implants and Imprints, which act as either a power-up or a passive. Implants can be activated, such as the ability to heal or the ability to teleport a short distance. Imprints, on the other hand, are passives that improve your runs, such as each time you wall jump you gain a small amount of health. Each time you discover a new Implant, Imprint, or weapon their information will be jotted down into the Database, but again you won’t be able to attach them to your character unless you reacquire them on the run.

That being said, there is an exception to what I’ve stated about not keeping items you’ve unlocked. The only thing that you can keep are Modifiers, which attach onto Implants and Imprints and will carry over through your playthroughs. However, again, you will have to hope to get those Implants and Imprints with attached Modifiers each time you run through a stage.

Another thing to note is that you don’t just find Implants and Imprints. Each time you complete a stage, a loot box will drop from the last enemy you kill, and inside will be three items you can unlock (unless you kill the boss in the level, then you’ll be given two draws of three randomly generated items). These random items can also be gun modifiers that add bonuses like extra damage, healing while you use it, etc. It’s the luck of the draw, and you can’t reroll for any new items. If you’re given any number of Implants or Imprints, you’ll keep all of them for the run. However, if you’re given a gun modifier you have to select the one you want. 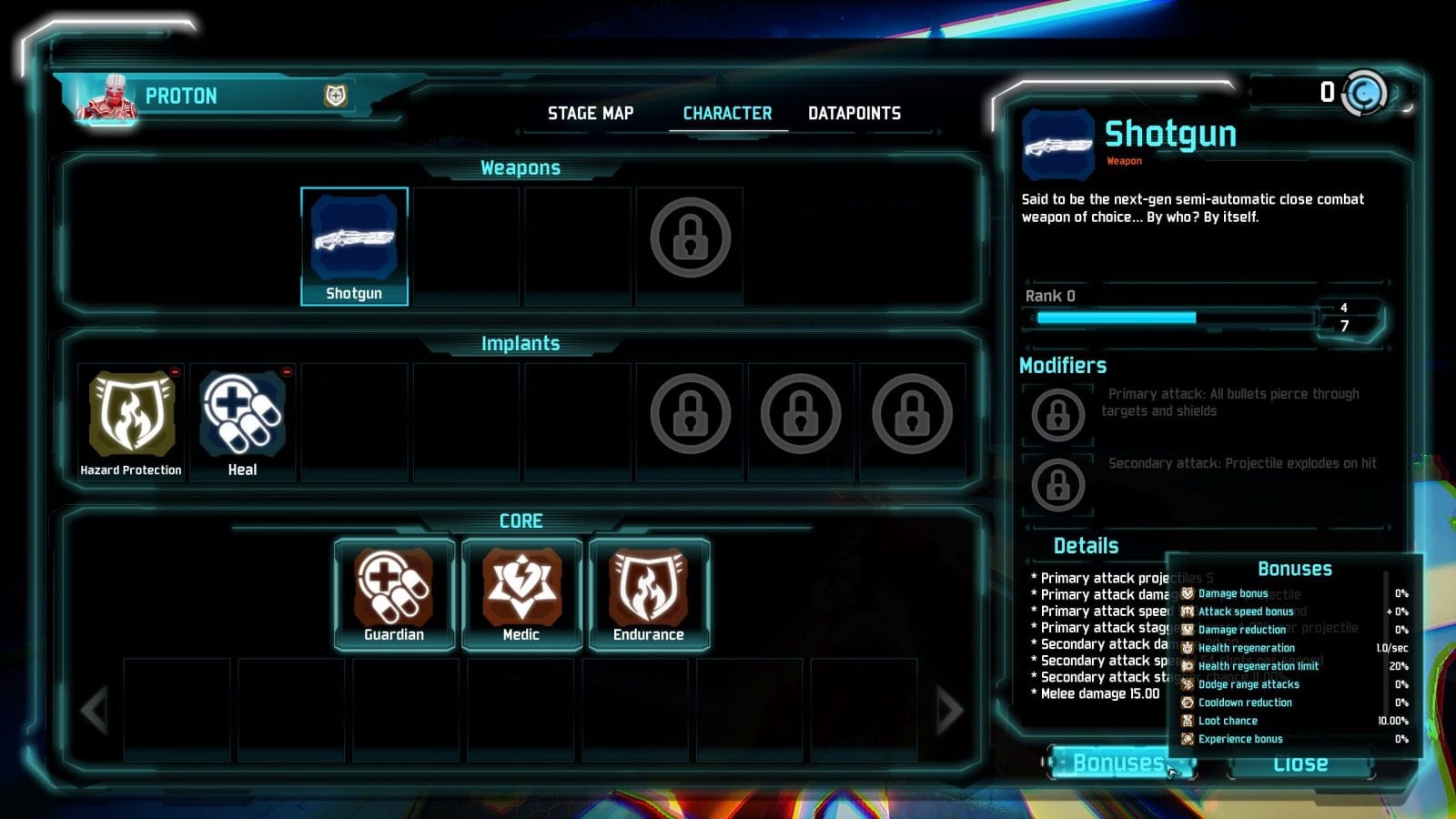 Why is this game marketed as a rogue-lite, but the stuff that players need in future runs can’t be carried over after death?

Does this all make sense?

Are you confused yet? Well, you should be. This game does a terrible job of explaining any of the rules of the game, as well as some of the mechanics. I can’t even class it in the same vein that a developer like FromSoftware does, where games like Bloodborne have details that are purposely kept from the player so it adds a sense of mystery to the game, and gives the gameplay a healthy challenge. This is nothing like that, and it just serves to confuse and deter the player from having an enjoyable experience. There’s no built-in FAQ to the game, and researching the game online comes up with nothing. I still haven’t worked out what the hell the Rank system is on the Imprints, Implants, and Guns, nor how to unlock Positrons. Do I need to get further into the game? Do I need to get to the final level 4 boss to unlock them? Or do I just unlock them by chance in a loot box? Again, no idea.

This is also another thing I’d like to note; I have not finished this game. I haven’t gotten passed level 3 yet, and that’s not a skill-based issue (so don’t @ me with “git gud” please). One of the biggest problems with this game is the sudden increase in artificial difficulty that doesn’t scale with the player and their unlocks, and the fact that it’s a rogue-lite doesn’t help. Level 1 is easy, and you should have no real issue with this stage if you’re comfortable with the gameplay mechanics. Level 2 is when things get about 50% harder, and you start having to conserve ammunition because the enemies start getting a bit more health and deal a bit more damage (take note, a bit). Then, for some reason in level 3, enemies get an insane boost in damage and health. They just act as bullet sponges that can kill you in a small number of shots. At this point, if you didn’t luck out on those loot boxes, you’re in big trouble. No matter how many times I got into level 3 with as much ammunition as I could carry, I could not for the life of me kill every single enemy in the first stage. The only time I came close ended up with me being blown up by the final enemy’s exploding carcass. In that same stage, I still didn’t have any ammunition after the 5th enemy I killed; I had to dodge bullets while I used a hit and run tactic with melee damage and constantly wall jumped to get a small replenishment to my health. I really have no idea what I would’ve done should I have gotten to the level 4 boss, let alone level 4 itself. 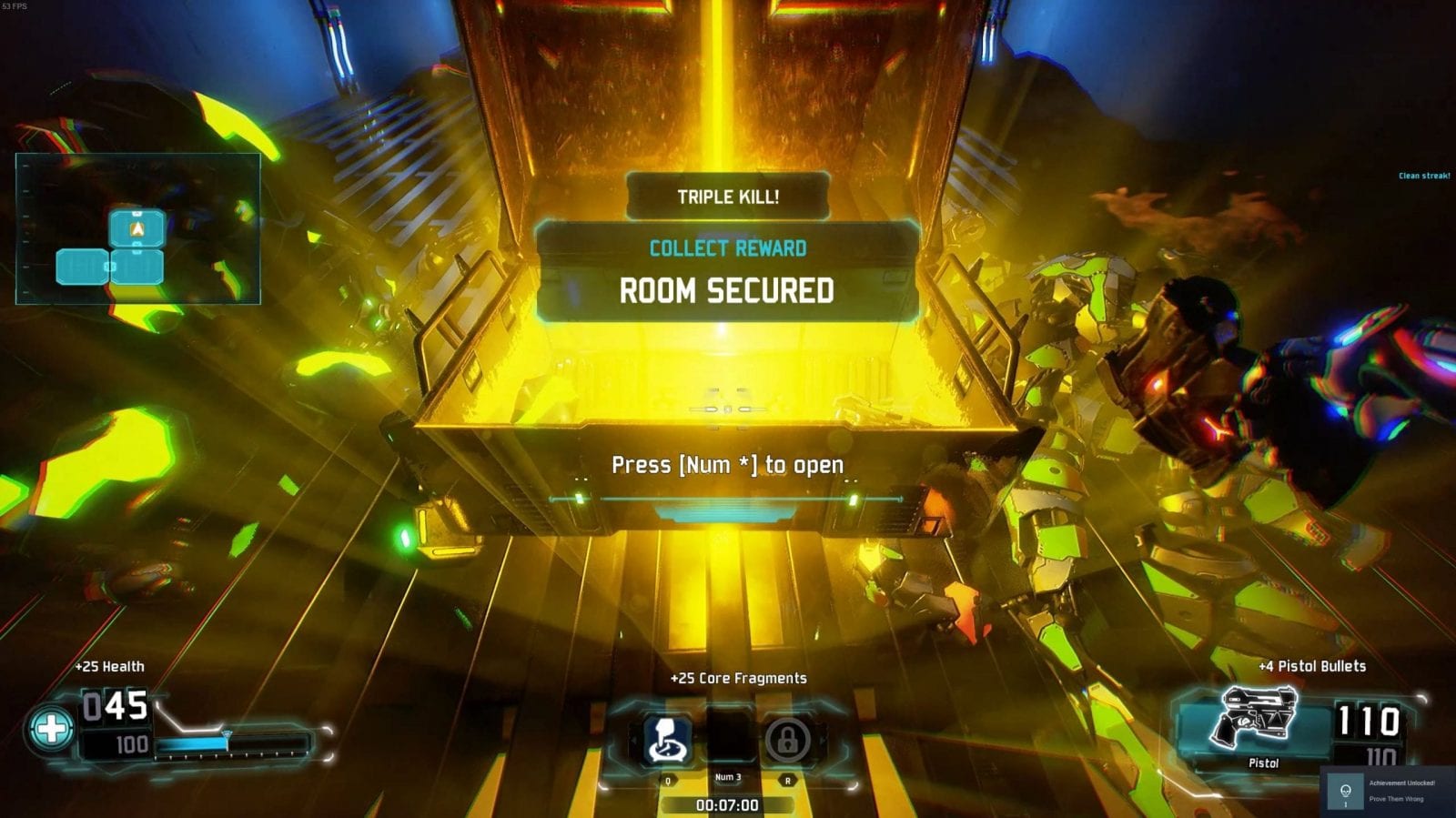 I stated that the game “being a rogue-lite doesn’t help”. This is another huge flaw in the gameplay design. This game is more attuned to being a roguelike, even though it’s marketed as a rogue-lite. For those that don’t know, a roguelike game is one that has permadeath and doesn’t allow you to carry over unlocks between runs. PositronX lets you carry a few things over between runs, but in the current state of the game the things that carry over are the things that don’t make that much of a huge difference to the gameplay. I’d have much preferred if all my unlocks (including the bonuses applied to weapons) would carry over from playthrough to playthrough, yet still keeping the same elements of a rogue-lite like procedural generation and permadeath. At least then I, let alone everyone, could complete the game, and it actually shows just by the statistics on Steam. This game has been in Early Access since the 28th of April, 2018 but was released this year on the 29th of October. So, at the time of writing this review, even though it’s been 2 years since this game was available for download only 0.9% of players have actually completed it.

Some things I will briefly commend this game for is the graphics, how well optimized it is, and the music. The game really is a marvel of a technological feat, since on my stock GTX 1070 GPU and stock i7-6700 CPU I pull between 65-90 FP; even in the most heated of battles. It runs incredibly well, and I didn’t experience a single frame rate drop. Another thing I would also like to add is that I experienced zero bugs and glitches. Scorpius Games put a lot of effort into those 2 years of early access to make the game run beautifully, and their hard work paid off. The last thing is the music design, which is amazing and is something I’d expect to hear in the newest Doom games. The soundtrack really adds to the gameplay and makes killing those Machines even more satisfying.

PositronX starts off as an amazing FPS game that’s marketed as a rogue-lite, but players will quickly realize that it’s more attuned to being a roguelike. Progressing through the four levels and it’s quickly evident that a high level of artificial difficulty is added, with enemies getting more health and damage, while you’re stuck with abilities and bonuses that don’t scale accurately against the rest of the gameplay. The game ends up becoming a grindy mess with its only salvation being the music design and the occasional new weapon or ability for the player to experience.

With a deep interest in writing, Ben followed that into a Journalism degree. As an avid lover for gaming, he is constantly expanding his library with console, PC, and VR games. He's obsessed with stealth games and loves hunting down the smallest of details inserted by devs.
Related Articles: PositronX
Share
Tweet
Share
Submit