Kazuma Kiryu can’t seem to leave the Yakuza life behind. Every year around Christmas time he gets pulled back into the Tojo Clan’s world to solve some dispute or another, usually with the neighboring Omi Alliance. This time, after finding the Tojo’s stolen 10 billion Yen, the retired fourth chairman finds himself in the middle of a war between the Omi and Tojo, sparked by the murder of the fifth chairman. As players once again don the stylish white suit of Kiryu they’ll team up with Kaoru Sayama, an Osakan detective specializing in organized crime, help eternal rival/best friend Goro Majima with his real estate ventures, fight on top of moving vehicles, play a few rounds of Virtua Fighter 2, and maybe punch a tiger or two in the face.

While we already have a review of this Kiwami (Translator’s note: Kiwami means extreme) remake of the series’ second entry on PS4, it’s finally landed on Microsoft platforms like the Xbox One and Windows Store. I’m also more familiar with the series than the previous reviewer, having played every entry other than 6 and the spinoffs, so I’ll have a different perspective. This is the first game in the series I’ve played that utilizes the new Dragon Engine, and while I thought previous games had good graphics and smooth gameplay these improvements blow them out of the water. The environments of Kamurocho and Sotenbori you’ll explore look amazing, with tons of little details everywhere like puddles on the street reflecting neon lights and the still impressive ability to walk into buildings without a loading screen or cut to black. I played the game on a base Xbox One, and this fancy new tech does cause some very slight dips in framerate when you’re out and about. These will largely disappear on less busy streets, inside shops, and when fighting whatever goons think they can take on the Dragon of Dojima, but it’s still a small blemish on what is otherwise eye candy. 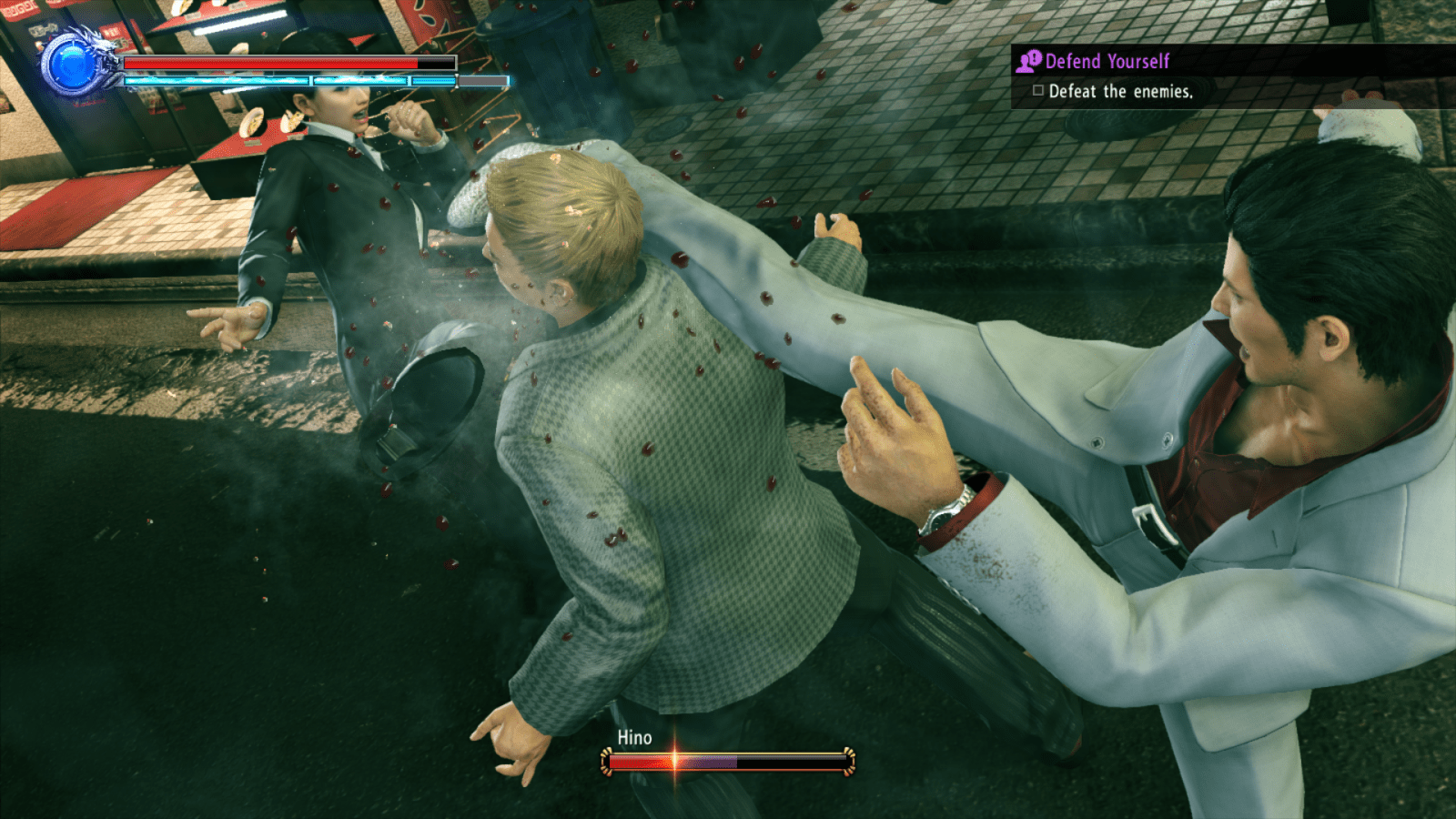 Kiwami 2 is a treat for the ears as well, the voice acting is as usual amazing, dramatic, and over the top. The music, while also great, can unfortunately be drowned out by various sounds of punching and is in general too quiet to hear. There isn’t an option to adjust the volume of voices, sound effects, and music so if you want to actually take in Yakuza’s jazzy stylings you’ll have to turn to outside sources.

As Kiryu attempts to stop the upcoming war, he’ll get into a ton of brawls with various foes. While the style system from 0 and Kiwami 1 is absent, the Dragon of Dojima now controls like he has all styles on at the same time. You can perform light attacks with the X button, follow up with up to two finishing blows using Y, press B to grab a thug, or even pull out your arsenal of now surprisingly useful weapons with the D-pad. Fighting will also fill up a heat gauge underneath your health bar, which you can consume segments of to use the series signature, brutal heat moves. After completing a certain side quest, you can use up the full heat bar to enter extreme heat mode, which functions a lot like previous games’ Beast Style but is much, much faster and has heat moves built in to its normal combos. At first, I was disappointed by the lack of styles and thought combat would be more shallow without it. Boy, was I wrong. Now, I would argue that combat is much more involved. In the past you needed to use the correct style to take on a type of enemy, and you didn’t vary much from this strategy. In Kiwami 2, however, I was utilizing Kiryu’s entire moveset in every fight. Throwing out quick punches and a finisher to knock an enemy down, then grabbing and spinning another to use their body as a weapon against the rest of the group. It’s consistently satisfying and stylish, especially when you can team up with a companion for a heat attack. I do have an issue with how heat attacks are handled with boss fights, however. When you’ve got your opponent down to a little more than half of their last health bar left, Kiryu will go into what’s called “Feel the Heat” mode, where you mash a button to fill the heat bar and perform a big finisher. I found these moments to be more disappointing than satisfying though, because it feels too automatic and occurs with too much health remaining to really feel like I beat the boss. While I found these moments fell flat, I think it speaks to how good combat in this game is that I just wanted to partake in more of it. 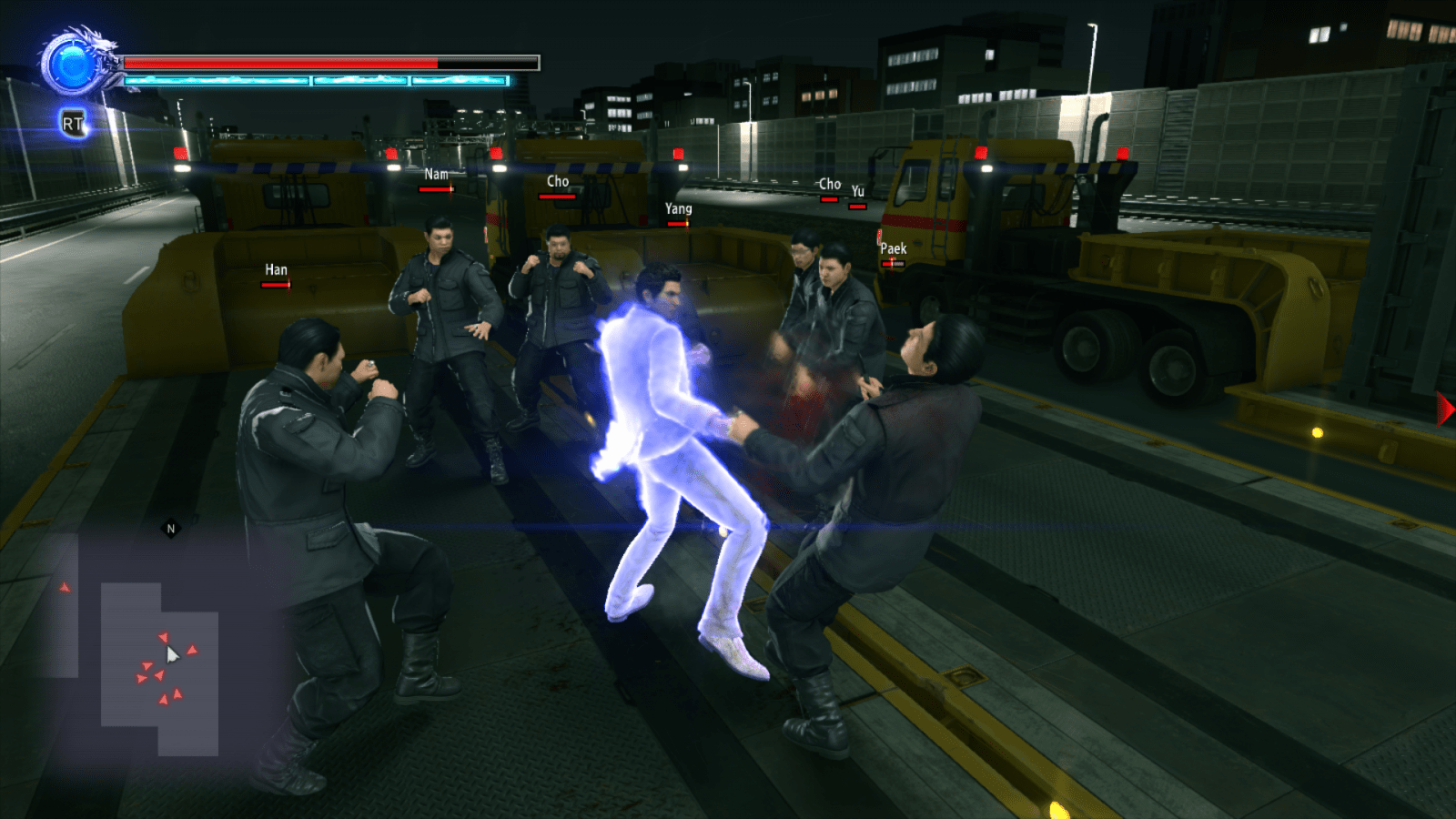 Taking on tons of Yakuza and other criminals can be tiring, so you’ll want to sample various restaurants to heal and gain experience points for the redone leveling system. Instead of gaining levels to spend on abilities, you now gain experience in five different categories to spend on stat bonuses and skills you actually want, instead of going through a tree. I focused mainly on improving my stats like attack, defense, health, and heat while taking a few skills I wanted like the essence of disarming abilities and increasing overall XP gain. By the end of the story, Kiryu was an absolute powerhouse worthy of the name Dragon of Dojima, and controlling him felt buttery smooth and responsive.

Unlike how I play most Yakuza games, I mostly stuck with the main story this time around. While I did do my fair share of sub stories, which are hilarious and on par with other entries, the plot this time around was especially gripping and well written. It’s so good that I don’t want to spoil anything, but I will say that it’s a shame they never brought back Kaoru after her minor appearance in 3 as the chemistry she and Kiryu have makes for some of the best moments in the series. She’s tough and badass, but has a sensitive side much like our hero, and would make for a great protagonist now that Kiryu’s story is finished.

Yakuza Kiwami 2 is a contender for the best game in this consistently excellent series. Its crime drama story of family, love, revenge, and pride will have you hooked. Combat has never felt as smooth or involved before, outside of certain moments. This is a gorgeous, fun, heartwarming, and extreme remake of one of the franchise’s most beloved entries.

David is the kind of person to wear his heart on his sleeve. He can find positives in anything, like this is a person who loved Star Fox Zero to death. You’ll see him playing all kinds of games: AAAs, Indies, game jam games, games of all genres, and writing about them! Here. On this website. When not writing or playing games, you can find David making music, games, or enjoying a good book. David’s favorite games include NieR: Automata, Mother 3, and Gravity Rush.
Related Articles: Yakuza Kiwami 2
Share
Tweet
Share
Submit