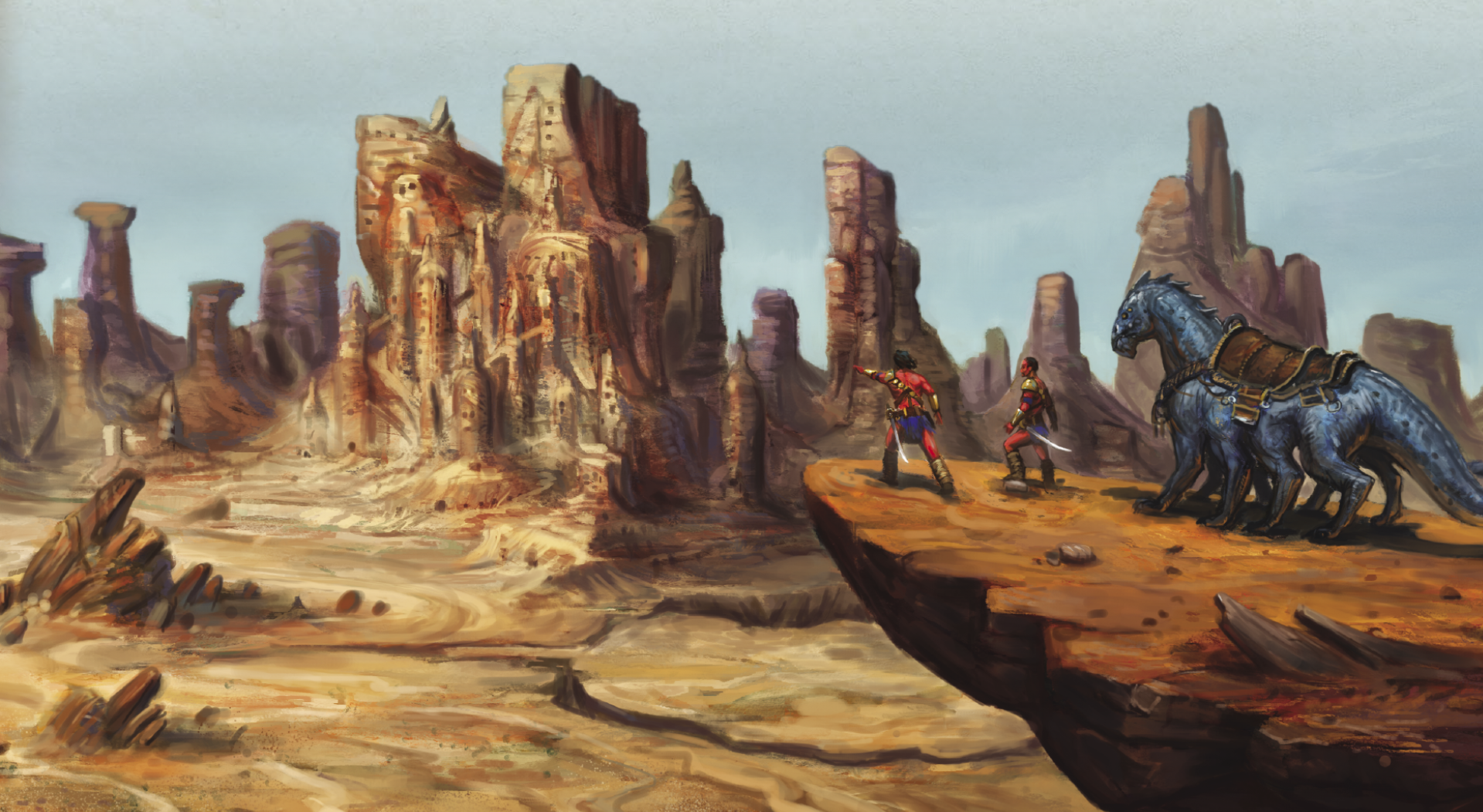 On a dying world amidst alien tribes, a warrior of Earth has finally come back to reclaim his rightful place. Edgar Rice Burroughs’ Barsoom series, set on the red desert of Mars, stood right alongside the titans of pulp media which would go on to quietly inspire some of the greatest artists who define our age. I harp on this point a lot in my reviews, but the influence of John Carter, Conan, Lankhmar, and Arkham are the direct foundation of so many of the greatest modern media, from Game of Thrones and Star Wars to D&D itself. With Modiphius’ new John Carter of Mars RPG, we return to the setting which has too long laid dormant. Disney’s ill-fated bomb of 2012 couldn’t keep a setting with such vibrance and life down forever.

Barsoom is a place of high adventure, set in a world that has lost much of its grandeur to time and heat. A single river remains to the planet, and its denizens struggle together in political factions to create order on a harsh world. John Carter, Confederate officer of Earth, found his way to Mars, and found the smaller planet’s weaker gravity had less hold on him. With abnormal strength and speed, and the ability to jump long distances, he set about conquering the many races of Barsoom. This is a land of adventure, romance, intrigue, and exploration. It has all the elements necessary to make for a great RPG setting, where players can navigate alien customs and landscape to make their way towards greatness. 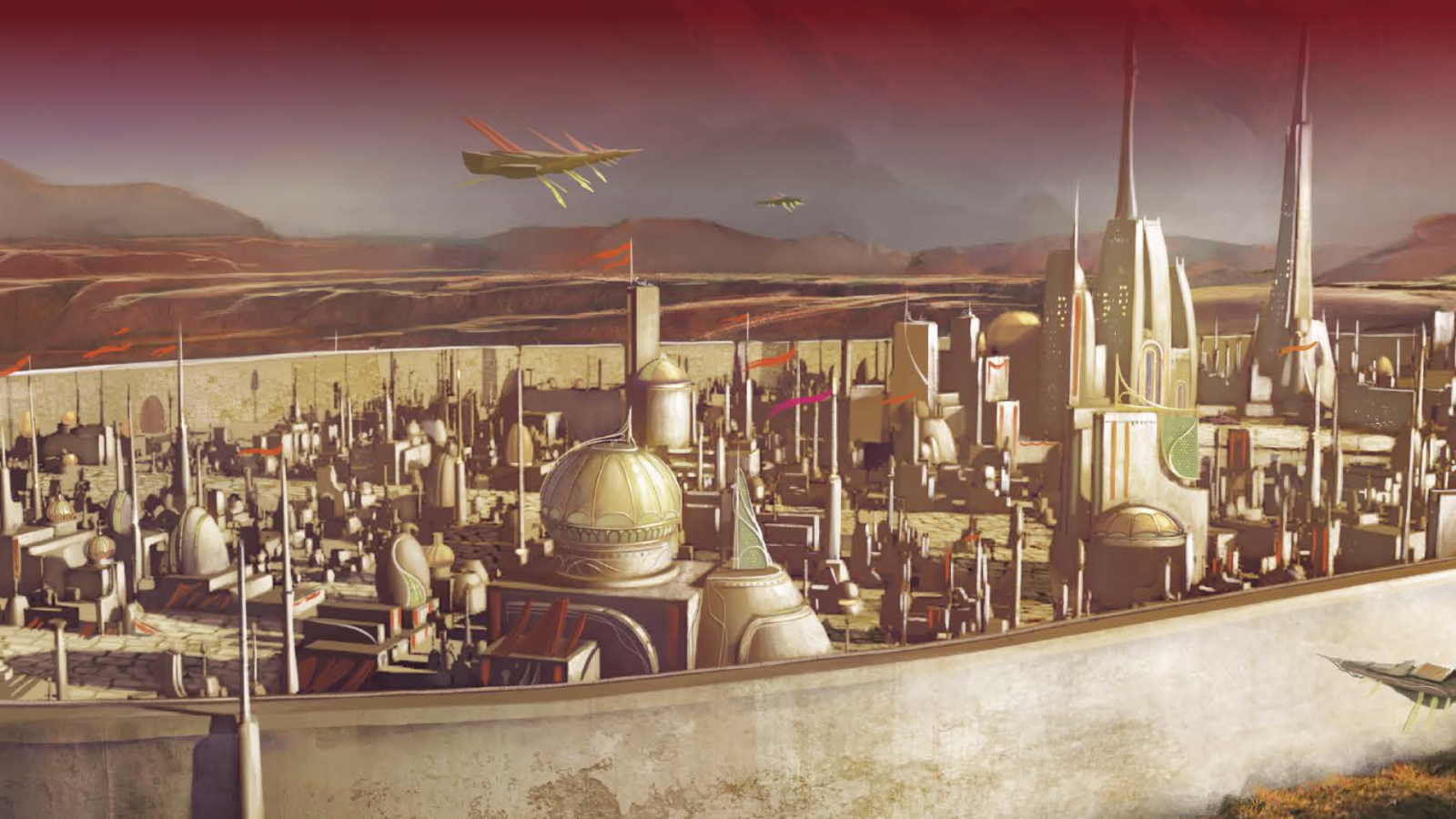 Those few of you familiar with Dark Sun will see many of its roots in Edgar Rice Burrough’s Mars setting. Most animal life is insectoid or reptile, and communicates through at least low level telepathy as well as language. Multiple races, whether it be the brutish though cunning tribes of Tharks or the Red Martians of Helium who have a better grasp of the technologies of the lost empires, vie for the few resources remaining on a planet almost completely without water. Each society has its own customs and practices that, if approached without care and knowledge, could lead you to disaster.

John Carter’s system is based on the 2d20 model of Modiphius’ other titles, but modified and stripped down to allow you to jump right into the adventure…mostly. A quick aside: to those of you who played the recent Conan game and found its metacurrencies too numerous and complicated, John Carter does have such metacurrencies, but they are much easier to use. But I will dig into those details after covering the major features of this system.

Once you get past a few questionable choices, the system plays like a breeze. Each character has six attributes (Daring, Cunning, Empathy, Might, Passion, Reason) which will roughly range from 4 to 12. These names are somewhat odd (what precisely “Daring” or “Passion” apply to is likely up for some debate), but leave enough room to interpret. The attributes are your only real stats, as John Carter has no skills to keep track of. To make a check, you will add whichever two attributes together which correspond to your action, and roll 2d20. For each die under the lower of the two attributes, you will get two successes. For each die over the lower but under the combined total, you will get one success. Every action has a difficulty from 1 to 5. If you roll a 20 on either die, you will achieve a critical failure, which can either create complications (narrative problems for your character) or Threat, the GM’s metacurrency.

As for those currencies, they are fairly uncomplicated, though the game maybe doesn’t need three of them. Threat belongs to the GM alone, and allows them to trigger special abilities of NPCs, win ties, and change the narrative in their favor. Momentum, generated by rolling greater than the necessary number of successes, allows the players to do roughly the same. Momentum is limited by your lowest attribute score. Each player also gains Luck points equal to their lowest attribute each session, and can spend Luck to add an automatic roll of 1 to a test, take extra actions, et cetera. Despite there being separate currencies, their rules are simple, and very easy to get used to. Practically speaking, the system is still far simpler than anything I’ve come across for pulp adventure, such as Savage Worlds or even most Fate hacks. 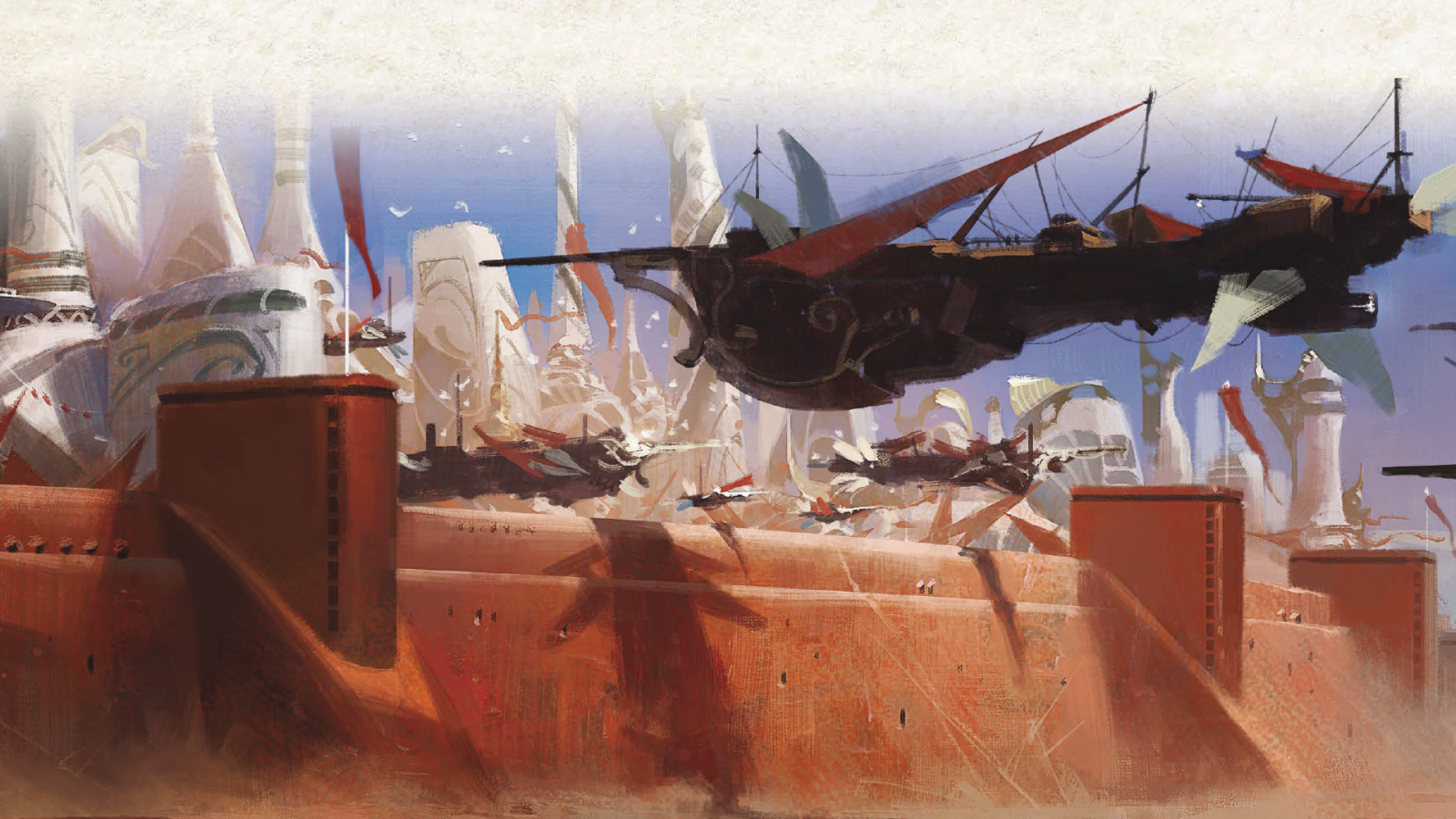 You can get used to this dice system, and things move quickly once you do, but it makes for a rough entry into the game: first of all, it will be hard to wrap your head around the probabilities of success for quite a while. That’s not to mention how odd it is to add your attributes together for every action and compare two dice rolls to three different values (under, between, and over).

Combat moves quickly, giving you much in the way of narrative control and little in mechanics. That being said, the combat system is perfectly functional, leaving you with enough mechanics to serve as a sufficient spine but enough open ended design that you can use your metacurrencies creatively. The combat rules incorporate confusion, fear, and physical injuries equally as effects that you can inflict on opponents, giving you additional options about how to weigh them down. While some people will still go for the old smash and grab route, putting mental combat on an equal footing as physical is a nice way to encourage players to act creatively in the midst of a battle.

Character Generation is also quite fast, also despite one or two small slowdowns. All attributes start at 4, and you have 2 points to increase them. Other modifications come from other places, such as races or talents. Each race (pulled, of course, directly from the Barsoom series) have specific languages, but more interesting knowledges, that come for free. Those knowledges are simple, but go a long way towards helping you craft your character, explaining what you would be aware of out the gate. Races also have areas of lore they are specifically not aware of. They also receive a few attributes bonuses (some of which you can choose), and some races come with free Talents. You then choose an archetype, which much like race provide certain things you know or don’t and things you are able to do or not, as well as attribute bonuses. You then choose a descriptor (which adds more attribute bonuses), Talents, and equipment.

As a brief counterpoint, one would be reasonable in questioning why there isn’t a skill system. While it’s simpler not to include one, the nebulous list of what your character knows and is capable of will probably lead to some issues during the game. Tying some mechanics to these directly could tighten things up a lot, for those who want less ambiguity in their games.

This character creation is fairly easy, but can take some time. There are many small steps, which mostly amount to attribute bonuses, but they don’t take long. What does take a while is choosing your Talents. There are TONS of these to sort through, as they are the only part of character creation that really has any mechanics associated with it, and the Talents are spread out through a few different places in the book. Of course, you can start with one of 7 pre-generated characters to skip past this, and if you are new to the system, I recommend just jumping right in. 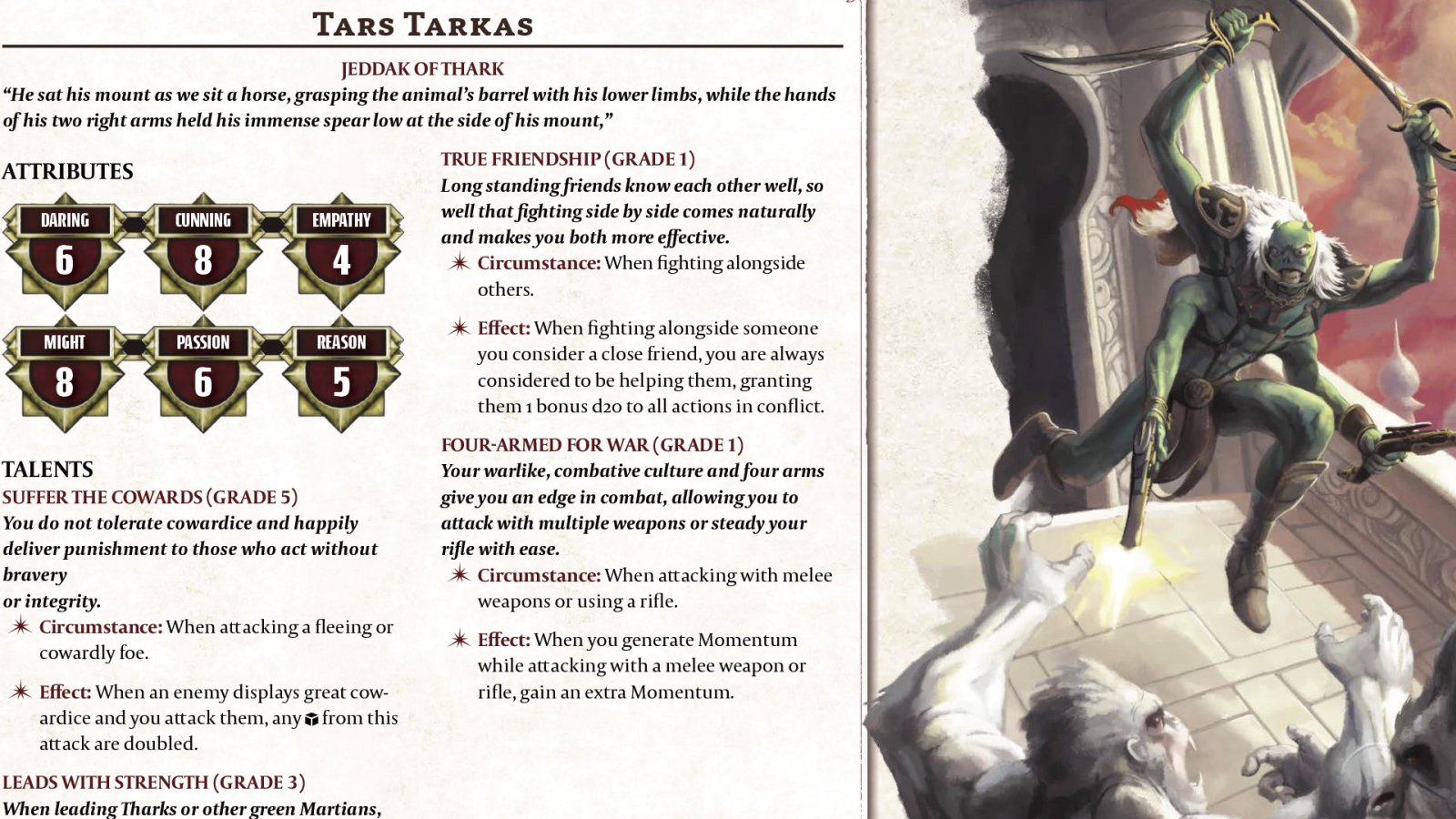 Of course, the book also has stats for the main characters of the novels, should you choose to use them

The book itself (I reviewed the PDF version) is laid out for tablets and screens rather than in usual book format. As someone who would be using this on a screen, I appreciate this, though it does lead to some unnatural blank space in the book, and some will always prefer a more traditional layout. As for organization, it’s mostly good, despite the aforementioned issue with locating Talents. Rules are often mentioned, sometimes with detail, many times before you can find the sections which actually describe them, which lead to frustration when you are trying to look something up.

The art is pure high adventure, and feels every bit like the alien civilization I pictured when reading the series. Not all are created equally, as some of the pieces seem closer to CG framing than the lavish paintings in other sections, but all of them have a pleasant amount of detail and care that entertain and inform in equal measure.

The GM section does a great job of giving you a primer on the setting, without requiring you to delve into the eleven novels that fleshed it out before. It explains the influences of the books, numerous ways to adapt them to your game, and the different eras of Barsoom that you can utilize during play. There are wondrous opportunities for adventures, and plenty of detail in small yet significant areas, from geographical explanations to political factions and fashion. Reading just a few of these pages will give you everything you need to send players into Mars to fight for survival against the harsh sun and strange creatures. In this book you can set survival tales as easily as romance, war, or high action.

The moss and sands of Mars are yours for the taking in a highflying RPG of grand adventure. If you want pulp action that's a little more cinematic and less granular than Savage Worlds, John Carter is right up your alley. A few odd decisions make for a higher than necessary barrier to entry, but I am happy to see such an accessible, adventurous entryway into Barsoom's barren canals rife with danger and mystery

John Farrell is a legal aid attorney specializing in domestic violence, living in West Chester Pennsylvania. You can listen to him travel the weird west as Carrie A. Nation in the Joker's Wild podcast at: https://jokerswildpodcast.weebly.com/
Related Articles: John Carter of Mars RPG, Tabletop
Share
Tweet
Share
Submit