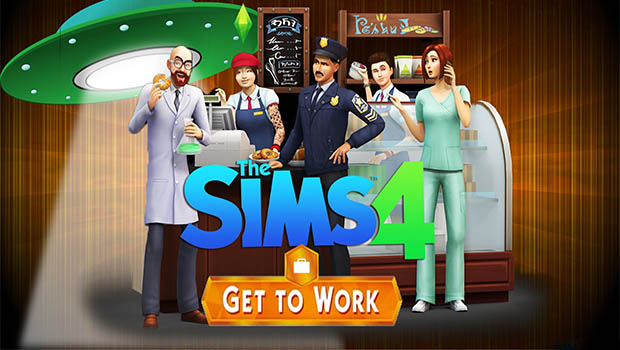 The Sims 4 suffered a lackluster launch and was not the game Sim-fanatics were craving. Though patches have added and improved the game vastly since launch, the inevitable expansions are what build on the Sims games and keep gamers coming back. Get to Work, the first expansion for Sims 4, does just that and could be the beginning to making the Sims 4 the best game in the series.

Much like The Sims 2’s Open for Business, and the Sims 3 Ambitions, Get to Work is all about advancing your Sims careers and opening up how you make your money. There are three new career paths; the doctor, scientist, and detective. Each path features its own very expansive workplace in which you can actually play and be a part of the work day. There is also the option to open your very own business and run it, although it unfortunately was one of the worst parts of the expansion.

The detective career path was the highlight of the expansion for me. Being a detective was always entertaining and fun. From talking to witnesses to scouring crime scenes for clues, this career path never seemed dull or overly repetitive. Based in the police department (which is fully planned out from interrogation rooms, to holding cells, to office areas) you grab a case to start investigating and right away jump into interviewing and searching for clues. Once you get closer and can identify a witness you can throw out an all points bulletin which throws you into a location where the suspect has been seen. After successfully finding and capturing the suspect you can shoot the mugshot, and process them. After that you can interrogate in hopes of a confession and ultimately locking them up to make the Sim World a better place.

The point of the scientist path, which all takes place in a big lab, is to make “breakthroughs” in different areas which allow bigger and crazier inventions to be built, even zanier than we are used to in the sims, including a wormhole attachment which allows one to travel to an alien world and meet, mingle, and befriend an alien race. There is also a lot of discovering and examining plants to create new plants and genetics.

The third path, doctor, is also a great choice and takes place in a filled out hospital. Starting out as a simple nurse, your Sim can move their way up to helping sick patients, delivering babies, and even saving Sims’ lives. The higher you are on the career ladder the more objects you can interact with and the doctor career is the path I felt the most change with each promotion, therefore giving me the most boost to try and move up the full career ladder.

If the new career paths are not your thing, Get to Work allows a Sim to open and run their own retail business. Building a business in the same way you build a house really allows the business to become yours. The building tools were also one of my favorite revamps from previous installments, so building anything can be a joy. You can also sell virtually anything, from clothes, to cooked foods, to paintings and beyond. This allows Sims of various skill sets, such as the new baking skill or painting, to sell the things they create. I personally had a Sim with a maxed out painting skill so I set up a whole gallery and sold whatever my Sim had painted. I loved owning my own business for these reasons, but also despised it do to a lack of control. Setting prices only had four options, and how I trained or set my employees to behave was almost absent. The actual running of the business seemed to be missing so much and that really made it seem boring and lacking, especially compared to how fun the new careers are.

As with any Sims expansion there are plenty of new objects, although in this one most were seemed to be oriented towards objects to put in your own business. I was a little disappointed in the lack of new items to play with outside of the business and wished they had added a little bit more to spruce up my home.

The graphics and sound are still as fun and cartoony as ever. The emotions that the SIms have also play into how they work and go really well with the theme of the expansion. Although not a part of the expansion the previous patches have really transformed the base game and with Get to Work out the series seems to really be on the right track. Now is a great time to try out the Sims 4 with the expansion as it slowly fills into the game we wanted at launch.

Get to Work is all about the careers of your Sims, and it does it well. It is the first expansion of the Sims 4 and is a great addition worth any Sims fans attention.

Growing up in a small Colorado town, Bryan has always had plenty of time to play games. PC is his first choice of tech followed by the PS4. Graduating at 16 Bryan knew he wanted to be a writer and wanted to combine his love of games into that and found Gaming Trend in 2012 where he quickly became a member and started writing for them as soon as he could. He is still at Gaming Trend, but now has 2 kids, a puppy, and a lot less time to play the games he loves, but he always finds a way to get back into gaming.
Related Articles: The Sims 4: Get to Work
Share
Tweet
Share
Submit