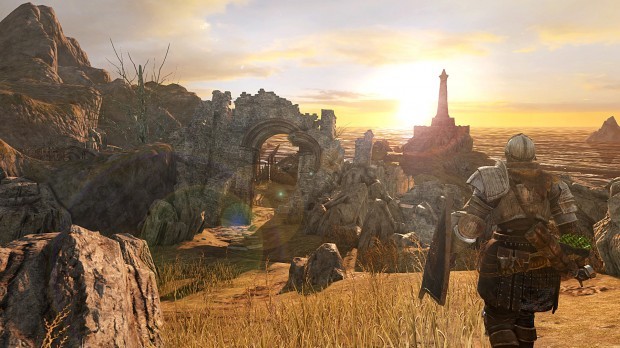 When Dark Souls 2 came out last year, my only regret was that I had to dust off my old console to play it. There are admittedly few games that I would even bother doing that for, but a Dark Souls game is one of them, and so I begrudgingly did so. With Dark Souls 2: Scholar of the First Sin, From Software looks to repent for their sins and bring the Dark Souls franchise to our shiny new consoles. Fortunately, Dark Souls 2: Scholar of the First Sin is more than just a simple port, as it brings much-needed upgrades and alterations to a game that was already great to begin with.

For those who haven’t played Dark Souls 2 yet, it’s the story of an undead trying to… well, actually the story is hard to explain. You see, most of the Dark Souls series’ story comes from item descriptions and, well…you know what? It doesn’t matter. You gotta kill bad things and take their souls, so that you can kill even badder things. There ya’ go.

The Dark Souls series is known for its difficulty and Dark Souls 2: Scholar of the First Sin is no exception. You’ll die — a lot, and in doing so you’ll become hollow, which makes you do less damage and reduces your maximum health every time that you do so. It’s brutal, completely unfair, and you’ll love every second of it. Because the Dark Souls franchise is a series that prides itself on not holding the player’s hand, allowing the player to explore, discover, and ultimately overcome obstacles on their own.

As for the updates that have been added to the vanilla Dark Souls 2 experience, the one that becomes immediately obvious after booting it up is the graphics. The console version of Dark Souls 2 now looks every bit as good as most PC versions look, and has the added benefit of some better textures to boot. Areas are more colorful, animations are smoother thanks to the improved framerate (60FPS), and darkness is more common than in the original version, which gives torches the usefulness they deserve. That said, although the game looks pointedly better than the previous-gen versions, it still doesn’t look great. The graphical fidelity of the Souls games have never been a primary draw though, so this shouldn’t be too much of a hurdle for players to get over.

The graphics are far from the biggest update however, as Dark Souls 2: Scholar of the First Sin aims to pull the rug out from under any veteran souls-player with a few devious changes. For one, enemy and items locations have been altered, so you can no longer rely on knowing where every enemy will be . Additionally, many opponents have been added, or swapped out with different foes altogether. In one instance, where I expected to fight a knight, an enormous dragon swooped in for the kill. In another, a minefield of firebombs was hidden in a path that I had previously come to expect would be safe. These alterations take an already difficult Dark Souls game and make it completely unnerving, which is awesome for those looking for a challenge.

Possibly the most terrifying addition though is “The Pursuer,” a malevolent spirit who hunts the player throughout the game. He can show up anytime, anywhere, and puts up an extremely tough fight each time. He is joined by several added red phantoms that make areas even more challenging. Worse yet, areas that the player has already completed are not immune to their presence. I found that most of my encounters with them happened in areas I had already completed, which makes traversing the world and collecting items you missed that much more difficult.

The DLC for Dark Souls 2 has also been altered in that players cannot simply download the content to access it. Instead, the keys to access those areas are hidden in some of the game’s most unforgiving areas, which makes even accessing the content its own obstacle. The DLC itself has also gotten the enemy and item location swaps, making some of the game’s most difficult areas even harder.

The multiplayer aspect in Dark Souls 2: Scholar of the First Sin has also been slightly improved in that players now have the ability to play with their friends. The Souls series has a longstanding stance of isolationism from your friends, and makes cooperative summons random. New features allow friends to join you, which makes a lot of sense seeing as how From Software has already embraced this idea in their newest game: Bloodborne. A max of 6 players can play together at once, and a host of PvP rebalancing has been done, bringing both PvP and cooperation to new heights.

Finally, there is the scholar of the first sin himself, a new character that opens up an alternative ending to Dark Souls 2. I won’t go into spoilers here, but I will say that given the general disappointment from fans in regards to Dark Souls 2’s lackluster ending, the new additions do a lot to make up that shortcoming.

Dark Souls 2: Scholar of the First Sin improves upon Dark Souls 2 in nearly every category, and is the Souls game that current-gen console owners deserve.

You know that jerk online that relentlessly trash talks you after every kill? That guy was probably Travis "Tie Guy" Northup. Competitive, snarky, and constantly wearing a tie, Travis has been writing his opinions about electronic media since he was a teenager, and is pretty much the only person to hold his opinions in high regard.
Related Articles: Dark Souls 2: Scholar of the First Sin
Share
Tweet
Share
Submit