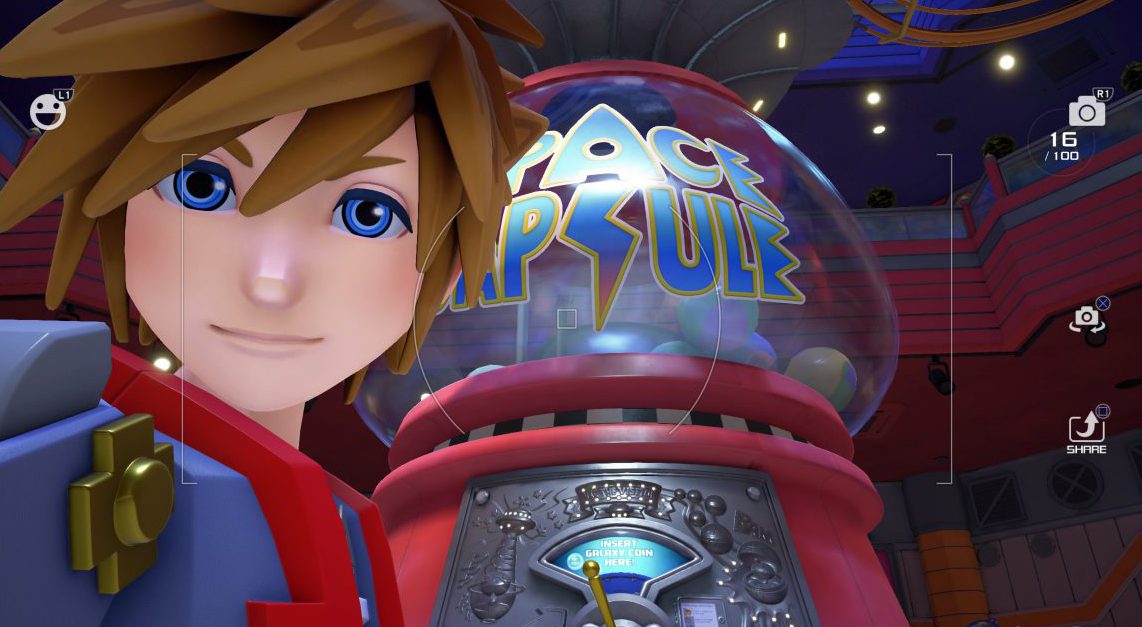 I really didn’t know what to expect when I started Kingdom Hearts III. I’m a huge fan and completed every game in the series, but I knew there was zero chance of it actually living up to its long wait. Now that I’ve finished Sora and company’s most recent outing, I’m left feeling a little disappointed. It isn’t a terrible game, but it is easy to spot the old school game design that carried over. This is a clearly a game that has been through development hell and suffered for it.

Let me get this out of the way now: Don’t play Kingdom Hearts III for the narrative. You will be left confused and disappointed. There is just too much going on here. Too many characters, too many plot lines, too many motives. The series as a whole would have been far better off if it was just written like a basic fairytale. There is a villain and in order to defeat the villain you have to travel to different worlds to get more powerful. That’s it. That’s all these games needed. Instead they had to bring time travel and Maleficent, and Ansem, and Organization XIII, and it just doesn’t work. When the game is focused and telling stories inside the individual worlds it can be pretty good. Unfortunately, it always comes back to Organization XIII and any life the story may have had is instantly sucked away by the repetitive dialogue and crazy story lines. I really don’t like bagging on writers, but the guys behind Kingdom Hearts III just were not up to the task of telling such a complicated story. Woody said it best: “Whatever you’re talking about, I don’t care”. Those are the most true words to ever be uttered by a sentient toy. 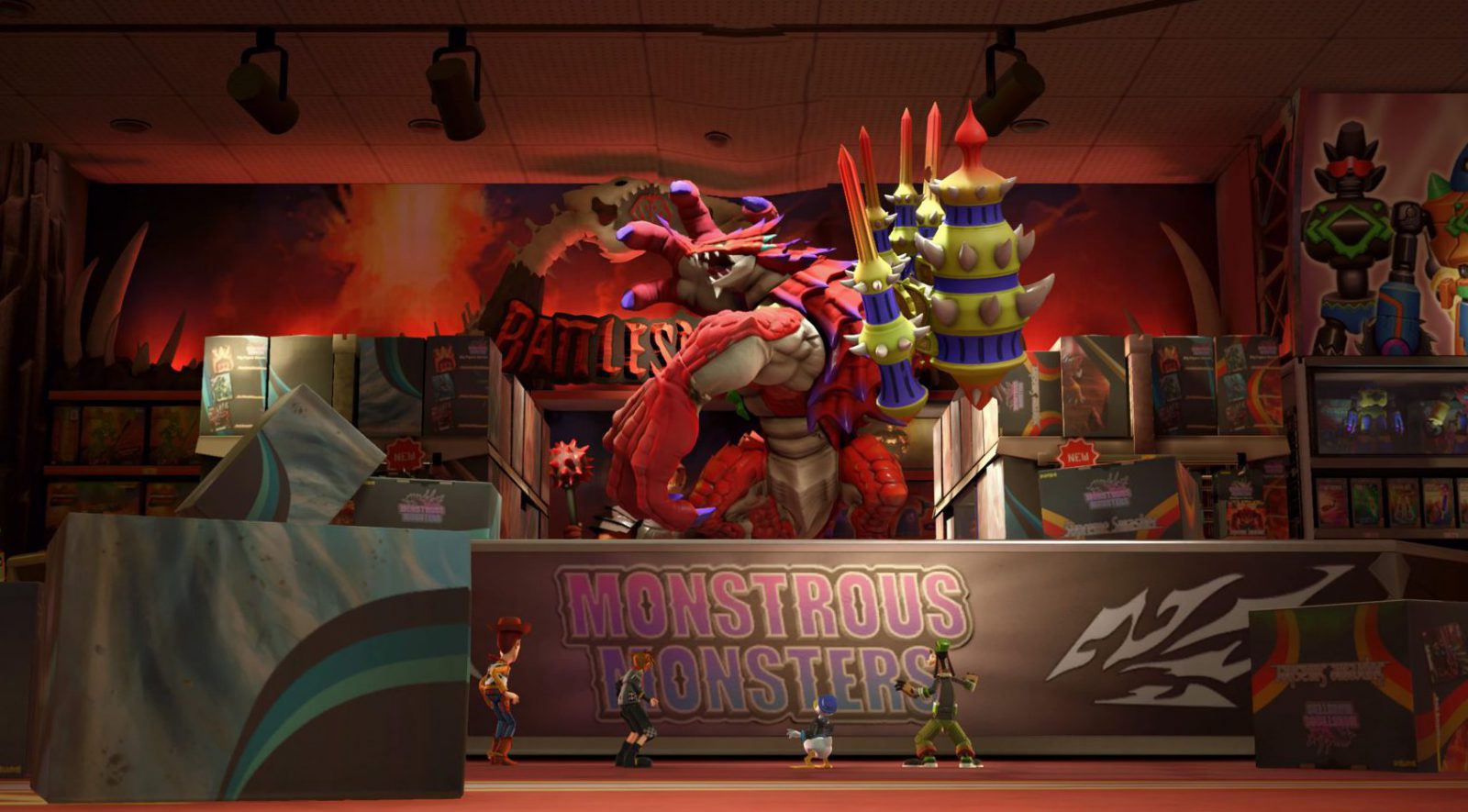 ToyBox is great in terms of gameplay. Story? not so much.

The general story is simple enough. Sora, Donald, and Goofy have to go to different worlds because Sora needs to unlock the Power of Waking so he can wake people up. I guess there isn’t much else you would do with the Power of Waking. Riku and King Mickey are off on their own adventure looking for a keyblade wielder. They are doing all this so they can beat Ansem. Or is it Xehanort? Xemnas? Sora is a good guy who is trying to get enough power and allies to beat bad guy. Everything else is just complicated fluff.

The story isn’t helped by the uneven quality of the worlds. At first, I thought they went the Nier: Automata route. Olympus and Toy Box offered unique gameplay twists and I thought the whole game was going to be a crazy time jumping from game type to another. As it turns out, that is not the case. They just pretty much stopped doing that after Toy Box. Olympus had me fighting titans and riding a roller coaster while launching fireworks while Toy Box introduced mechs which added a little FPS to the mix. Arendelle? It has snow. Monsteropolis? Grinding on the door system was cool I guess? Kingdom Hearts III starts off so strong just to quickly stagnate. None of the worlds are terrible, but some clearly had more effort put in than others.

I guess now’s as good a time as any to talk about the Gummi Ship. I hate it just as much as I did in the previous games and I really wish they would have just ditched this concept. Battles in the Gummi ships always end up just spraying bullets while dodging basic projectiles. The fights are long, boring, and lack any real sense of strategy. It also takes way too long to fly to a new world, which really messes with the pacing. It has the trappings of a good bullet hell shooter, but doesn’t stick the landing well. 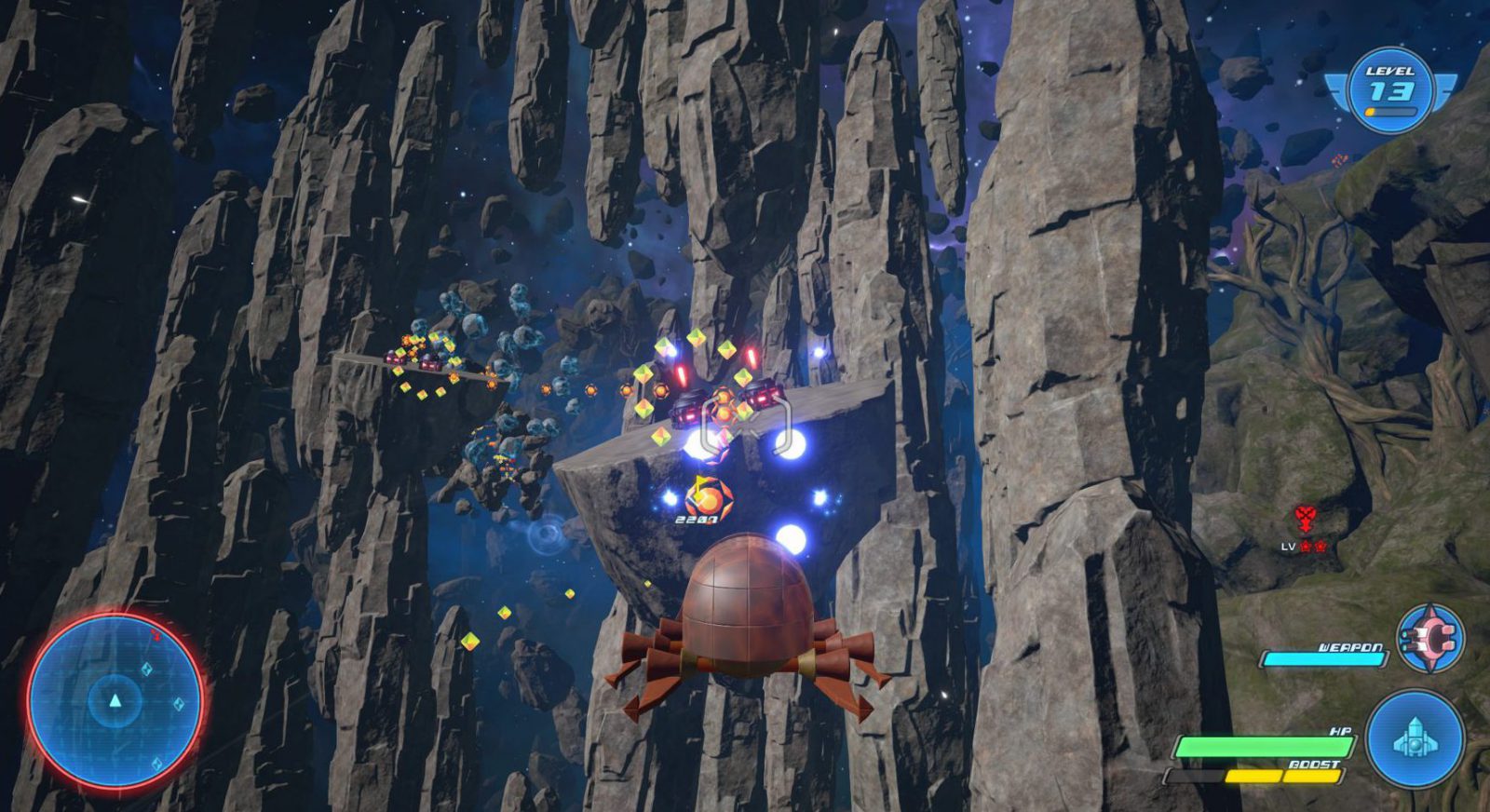 I just don’t like the Gummi Ship. It really hurts the pacing this time around.

While there is plenty to dislike about Kingdom Hearts III, it is not without some highlights. The combat is spectacular and consistently fun. No matter what stupid villain I have to fight, no matter how many times they spew the dark and light speech, I know I will have fun beating up Heartless, Nobodies, and the Unversed. If you played the previous entries, the combat in Kingdom Hearts III will be very familiar. You use the menu to navigate between attacking, magic, items, and summons. To make things a little simpler, they also have quick commands for your favorite spells and items. This system is fluid and entertaining even if it doesn’t expand much through the game. You don’t really get anything new that opens up new opportunities in combat.

The newest addition to combat is attractions and they are pretty bad. Attractions are just special attacks that take the shape of a Disney World ride like the spinning tea cups or the blaster cars. These are really fun at first, but there are only a handful of them in the whole game and they pop up all the time. I quickly got to the point where I just ignored them because they started slowing me down too much. Pro tip: choose magic as your specialty and play on Proud Mode. Magic is really fun since you can now slide around the battlefield while casting a spell. Cast thunder while moving around the fight will quickly eliminate enemies. If you are a fan of the older titles, Proud Mode is a must this time around. Normal is just far too easy. I think only died once or twice and that was in the beginning when I was still figuring it all out. Critical Mode is really missing this time around and would have provided some much needed challenge. 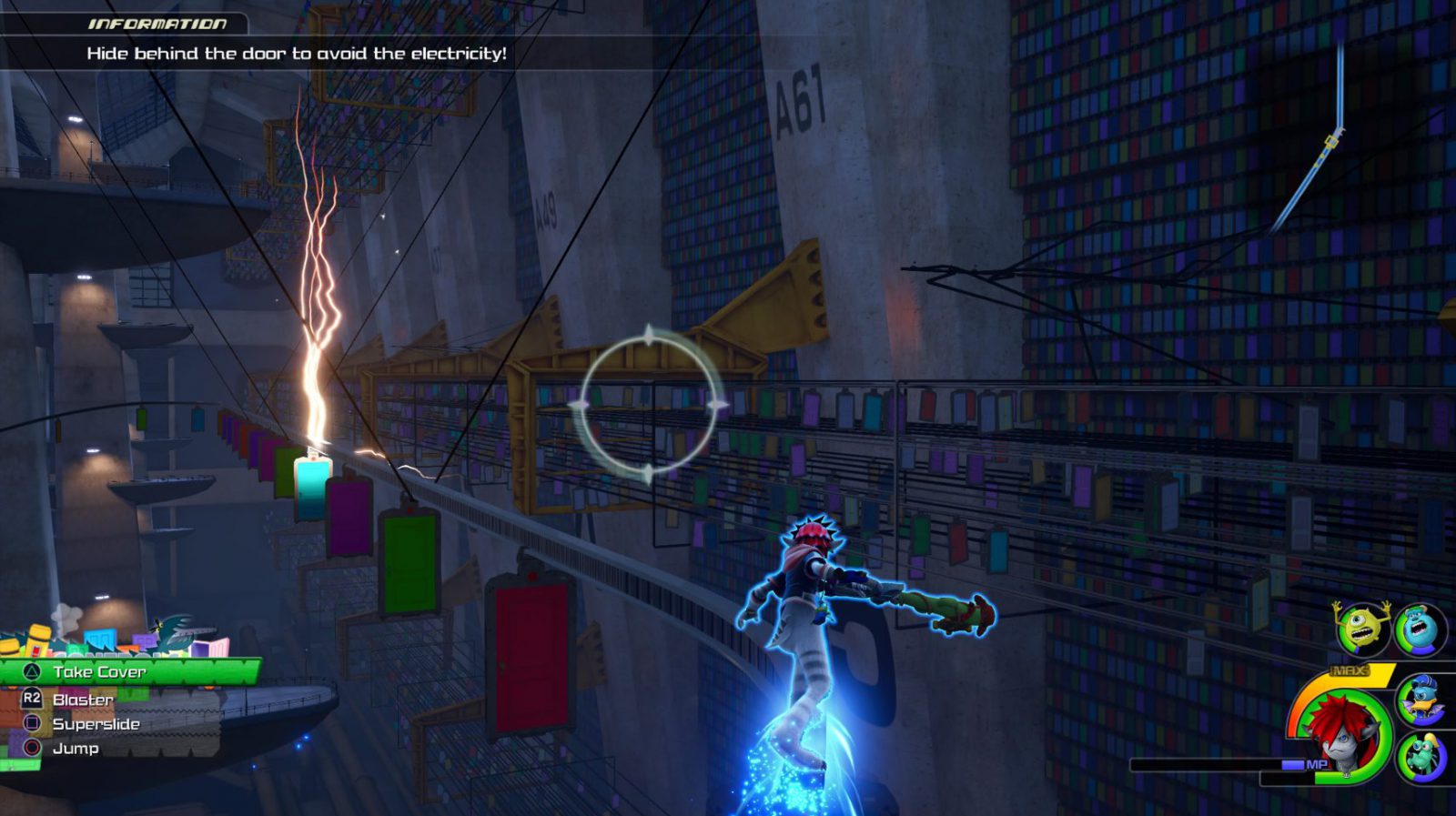 Grinding on rails is a fun but rare experience.

Another change I really like is the new keyblade system. You can have up to three keyblades equipped at once that boost your stats, give you new abilities, and offer unique attacks. These have special transformations once you build up their meter with attacks, and from being able to create and attack with clones to transforming to dual pistols, there is plenty of variety here and it is fun to experiment and find good combinations. Being able to switch keyblades mid-combo allows you to really take advantage of their unique strengths and weaknesses. Once I’m done blasting spells it’s nice to be able to quickly switch to a melee oriented keyblade.

While the combat is great, it isn’t perfect. Donald and Goofy feel more like a part of the fight than in the past, but I often still forget they are there. Outside of a couple special moves with them, they don’t tend to do a lot. The bosses are all pretty bland with the strategy rarely anything more complicated than ‘hit-them-until-they-die’. The enemies also don’t feel very unique. The Nobodies, Heartless and the Unversed all act the exact same way.

Kingdom Hearts III brings a lot of new stuff to the table, it’s just a shame that most of it is pointless filler. Hunting hidden Mickeys is a nice nod to Disney World and I really like the idea of this feature. It could be a great excuse to explore the levels. Unfortunately, exploring the levels is usually more frustrating than fun. Remember when I said some old school game design carried over? Invisible walls. They are everywhere and it is very frustrating. Video games have come so far and there just isn’t much of an excuse for invisible walls anymore. The Moogles are back and along with synthesising items, they now want you to collect pictures for them. This would be more fun if it gave you a riddle and you had to find out what they want. Instead it tells you exactly what they want and you just have to get a picture of it. It is always super easy. 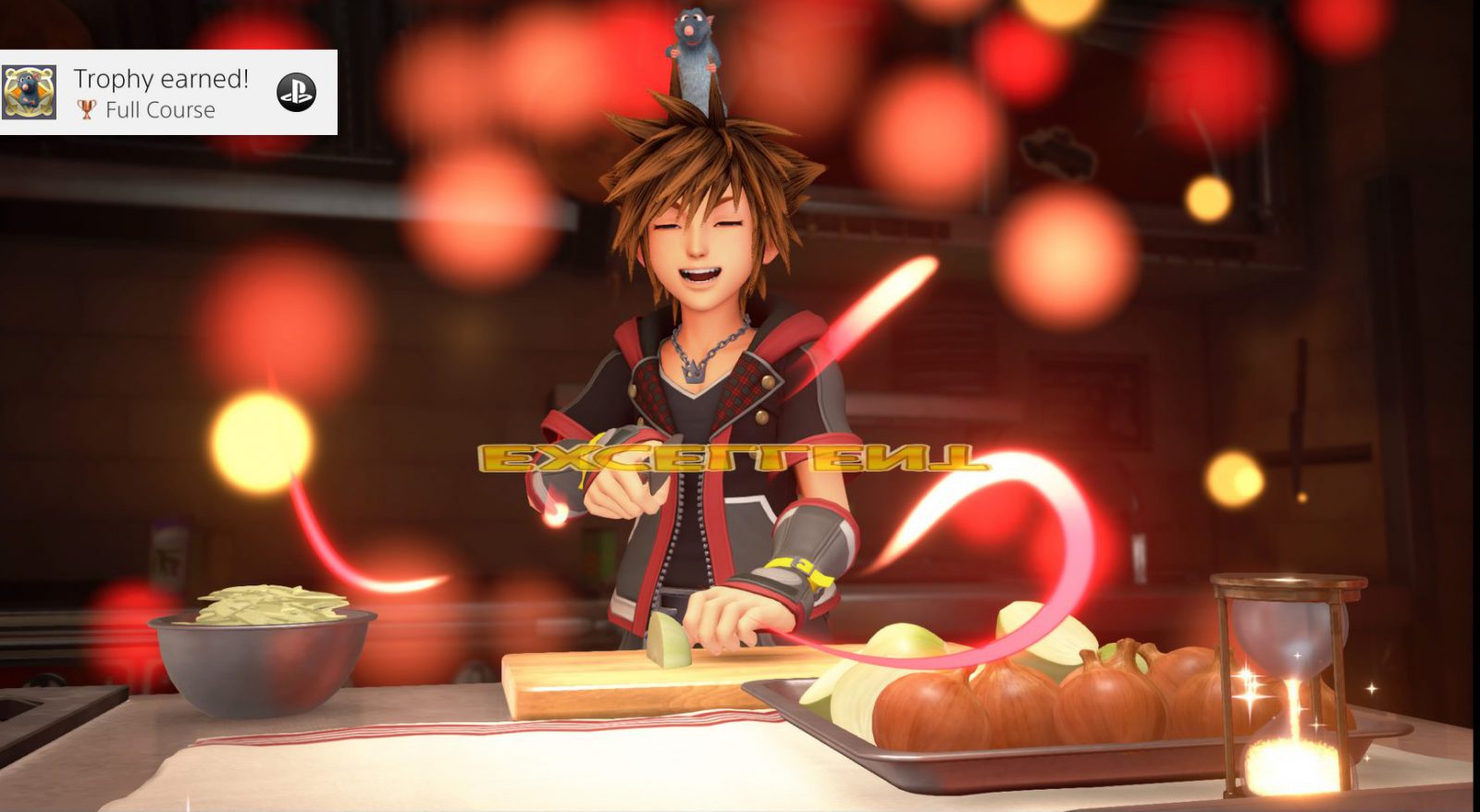 I’ve never gotten into cooking in games and Kingdom Hearts III is no exception.

The biggest wasted addition is Trinity traversal. It is introduced in Olympus where you use Goofy’s shield to sled through fire. It is then pretty much never used again. This could have been a fun way to open up the worlds for more exploration but they just drop it right after it is introduced.

Another big addition is the cooking because of course there is cooking. It seems like someone had mandated all JRPGs need cooking. This one is fun enough. You collect ingredients and then play a small game to cook the meal. It is short and satisfying, though never really necessary. Cooking boosts stats temporarily but I breezed through the game without ever really using it. Like many of the game’s features, the ease of combat renders this bonus unecessary.

Austin Fern has been playing video games his entire life. The first console he truly fell in love with is the PlayStation 2 with Sly Cooper, God of War, and many others really leaving an impression. He enjoys all genres of games from FarCry 5 to Danganronpa and everything in between.
Related Articles: Kingdom Hearts III
Share
Tweet
Share
Submit