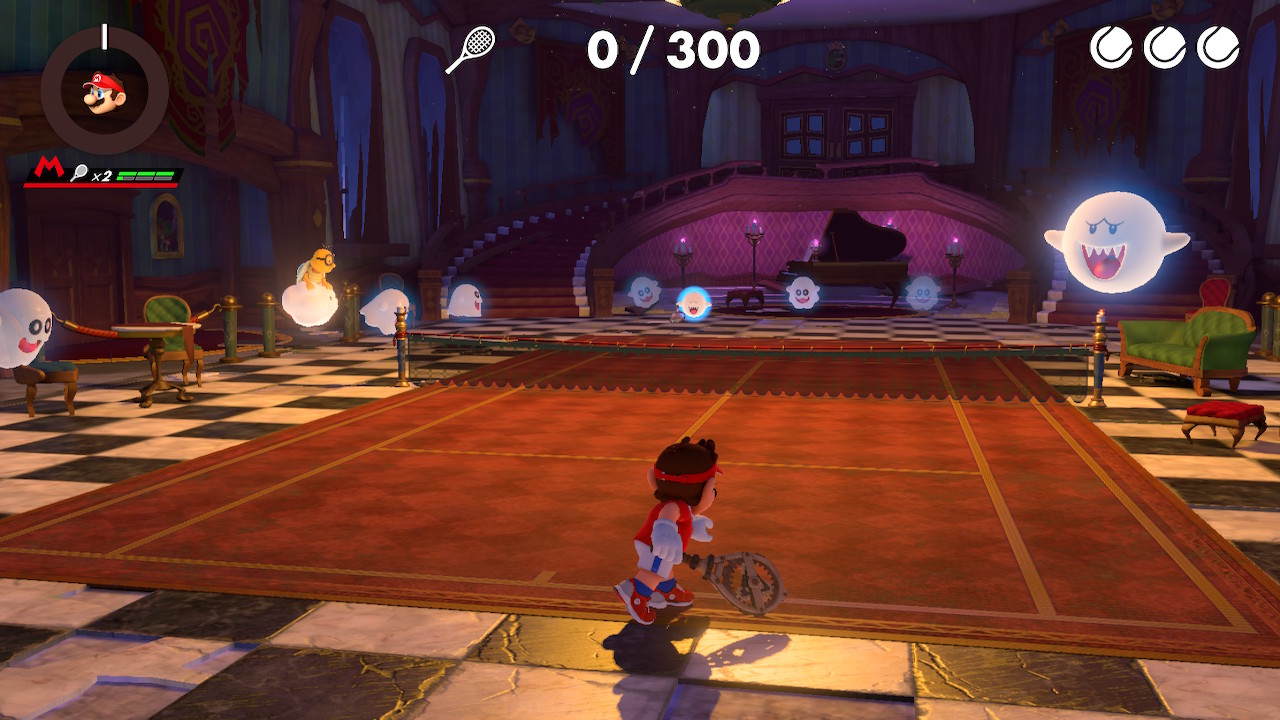 It was early in my time with Mario Tennis Aces that I realized a major flaw. I was just a couple missions deep in the story based Adventure mode when I knew: The game is boring. It lacks the charm of Super Mario Odyssey or Mario Kart 8 Deluxe and got very repetitive very quickly. This is pure mediocrity, and we all know Nintendo is capable of far better than this. I was expecting a charming, predictable story that centered around creative levels. What I got instead was just a repetitive tennis game.

Let’s get the online out of the way now because I haven’t enjoyed my time with it. I have no idea how good it is. The reason I didn’t play it? I’ll tell you it isn’t from a lack of trying. My matches either disconnected or lagged so hard it was completely unplayable. So yeah, it was a completely miserable experience that Nintendo needs to get straightened out immediately. The fact that it is still a persistent issue even after a few weeks is a problem.

Actual tennis matches is where Mario Tennis Aces shine, even when they do put a pole right in the middle of the court.

Where I spent the most time was Adventure Mode: I was bored. It isn’t bad, it is just completely uninspired. You play as Mario as Toad just follows you around being completely useless as you track down Waluigi and Wario who are possessed by an evil racket, because of course they are. It’s fine and as predictable as one would expect. The game also looks pretty good, however, it lacks the same level of detail and flair found in other Nintendo games. What really got to me was just how repetitive everything is. You move to a level, you select the level, then you do some stupid mini-game that sometimes resembles tennis.

When the missions are actual tennis matches, the game is pretty enjoyable. You have a variety of different regular and special shots to experiment with. There is the trick shot which is a unique shot, and each character has a different pose. There are zone shots which have your character jump into the air and send the ball flying towards your opponent (this requires precise timing on the receiving end, lest your break your racket). There is also zone speed which slows down time allowing you to quickly cross the court, as well as the ability to quickly cross about half the court to hit the ball which, if timed properly, fill your energy gauge which is what allows you to pull off special and zone shots. Proper games become chess matches of using and conserving energy to make the most of the shots. Where the game starts having issues is when it goes off into something different like hitting fireballs back at Piranha Plants or hitting specific spots on a mirror. These are boring. They add nothing new to the mix and force me use limited mechanics instead of facing interesting opponents in an actual tennis match.

The bosses are all pretty boring. Play tennis, hit them with a zone shot, then dodge stuff.

I’m also not a fan of the use of artificial difficulty throughout the game. Most everything has a time limit. I’ve always found this to be the laziest way to force difficulty. I just want to play tennis, not worry about a clock ticking down. It lacks all imagination, and dampens the mood significantly. It also does the thing where the opponents all get an advantage. Donkey Kong has Piranha Plants that catch your balls and sending them flying back at your from a different direction. The Mirror Queen, a giant possessed mirror, has smaller mirrors that act like portals constantly sending high speed hits from different directions. I’d much rather them the AI just improve as I progress. Even with these advantages, none of the opponents are that difficult or interesting. The bosses, such as the Mirror Queen, are usually just involve hitting them with tennis balls, hitting them with a zone shot, and then dodging some attacks. The only time the game gets difficult is in some of the side missions such as Rally challenges where you have to rally the ball a certain number of times and the Panel challenge where you have to hit the ball at panel to score a certain number of points before time expires.

There also isn’t very many game modes. You have Adventure, Tournament, and Freeplay. Adventure is Mario Tennis Aces’ story mode, Tournament is… well, a tournament, and freeplay is where you would play with friends as it lets you adjust some of the rules. This include simple mode, which removes special energy mechanics and has you playing regular tennis. Even assuming online works perfectly, this is a pretty disappointing line-up, even compared to the original Mario Tennis on N64. In a recent comparison, Mario Kart 8 Deluxe has a battle mode, time trials, a plethora of circuits and kart parts to unlock; Mario Tennis Aces has tennis. While you can unlock a few different rackets and stages, and there is a large roster of characters, there just isn’t much to the game at the end of the day. There is also Swing Mode which is allows for motion controls. While they do work pretty well, motion controls have never and will never be my thing.

Mario Tennis Aces isn’t a terrible game, but is a forgettable one. Online doesn’t work consistently, Adventure mode is pretty boring and uninspired, and there is a smattering of content. The game just lacks the heart that Nintendo titles have, and this leaves us with a bland and forgettable game that doesn’t do anything interesting. It’s not bad if you are just looking to get some friends or family together to play a few matches, but don’t expect the appeal to last much further than that.

Mario Tennis Aces isn’t a terrible game, but is a forgettable one. Online doesn’t work consistently, Adventure mode is pretty boring and uninspired, and there is a smattering of content. The game just lacks the heart that Nintendo titles have, and this leaves us with a bland and forgettable game that doesn’t do anything interesting. It’s not bad if you are just looking to get some friends or family together to play a few matches, but don’t expect the appeal to last much further than that.

Austin Fern has been playing video games his entire life. The first console he truly fell in love with is the PlayStation 2 with Sly Cooper, God of War, and many others really leaving an impression. He enjoys all genres of games from FarCry 5 to Danganronpa and everything in between.
Related Articles: Mario Tennis Aces
Share
Tweet
Share
Submit