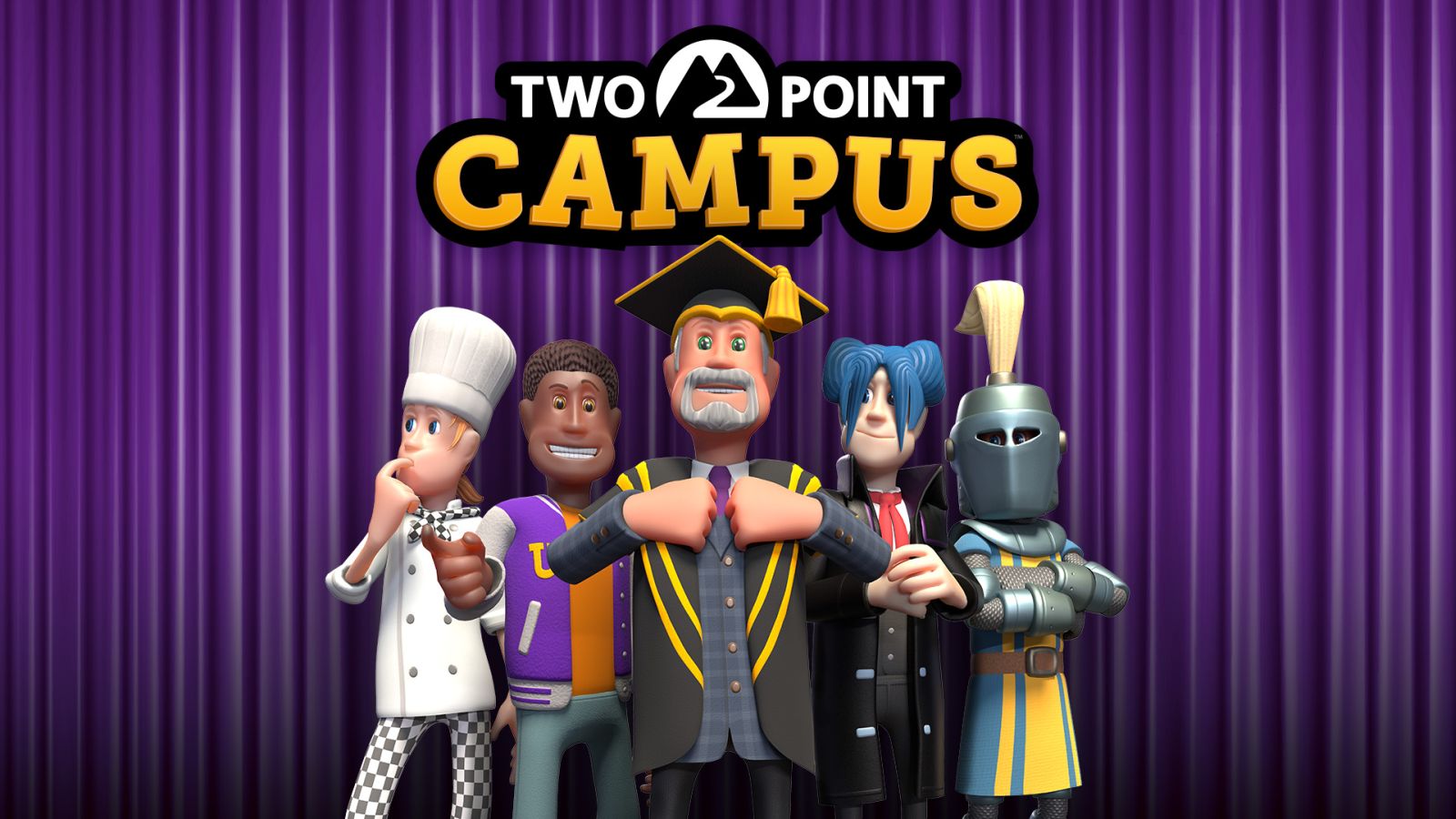 College life is funny. You start your college career with ambition aplomb, and then realize that you hate getting up at 7am…or 10am…or before noon. But that doesn’t mean your faculty and support staff isn’t hard at work. Well, they’re at work anyway. As a school administrator, both groups of feckless layabouts are now your problem, and Two Point Campus lets you turn problems into opportunities, and opportunities into money! We went hands-on with a first-look build of the game for a whopping 48 hours to “educate” as much money out of our students as humanly possible. 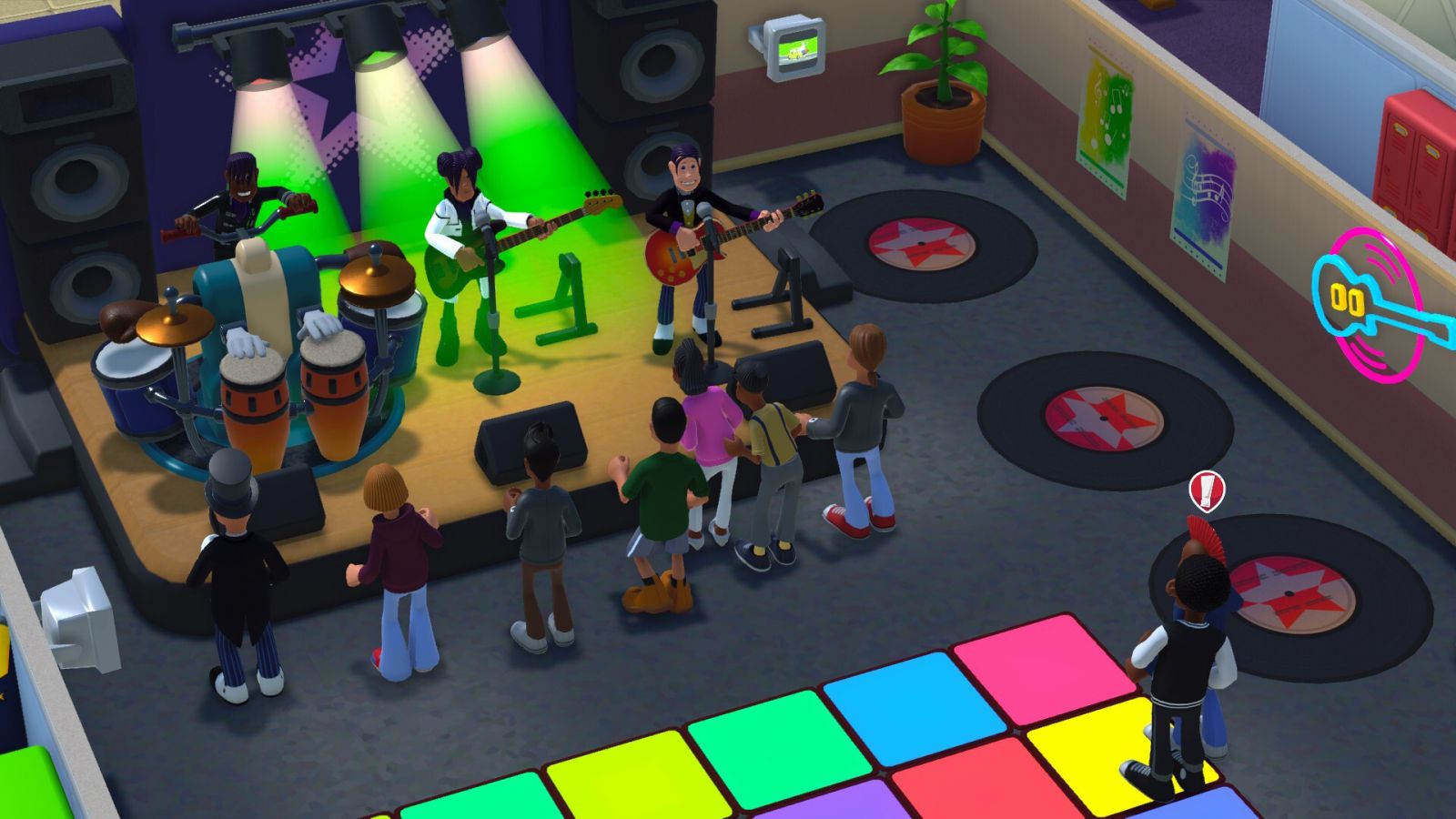 Two Point Studios was formed to take a second shot, or 2.0 version, at the team’s favorite back catalog of games they’d worked on in their storied past. Given that many of the team members came from studios like Lionhead, Bullfrog, and Muckyfoot, quirky simulation games are in their blood. Now, we see the Two Point Studio team’s simulation – Two Point Campus. With DNA from their ultra-fun Two Point Hospital baked right in, can this new game deliver something fresh?

Right out of the gate you’ll notice that there are a lot of similarities between Two Point Hospital and Two Point Campus, at least aesthetically speaking. They clearly inhabit the same universe as your vending machines sell things like Cheesy Gubbins and Burp Cola – staples of all your hospitals. It also uses much of the same tried-and-true UI and mechanics. But don’t judge the book by its cover (wait…isn’t that exactly what those fancy illustrative covers are for? I digress…), there are a lot of improvements on offer here. 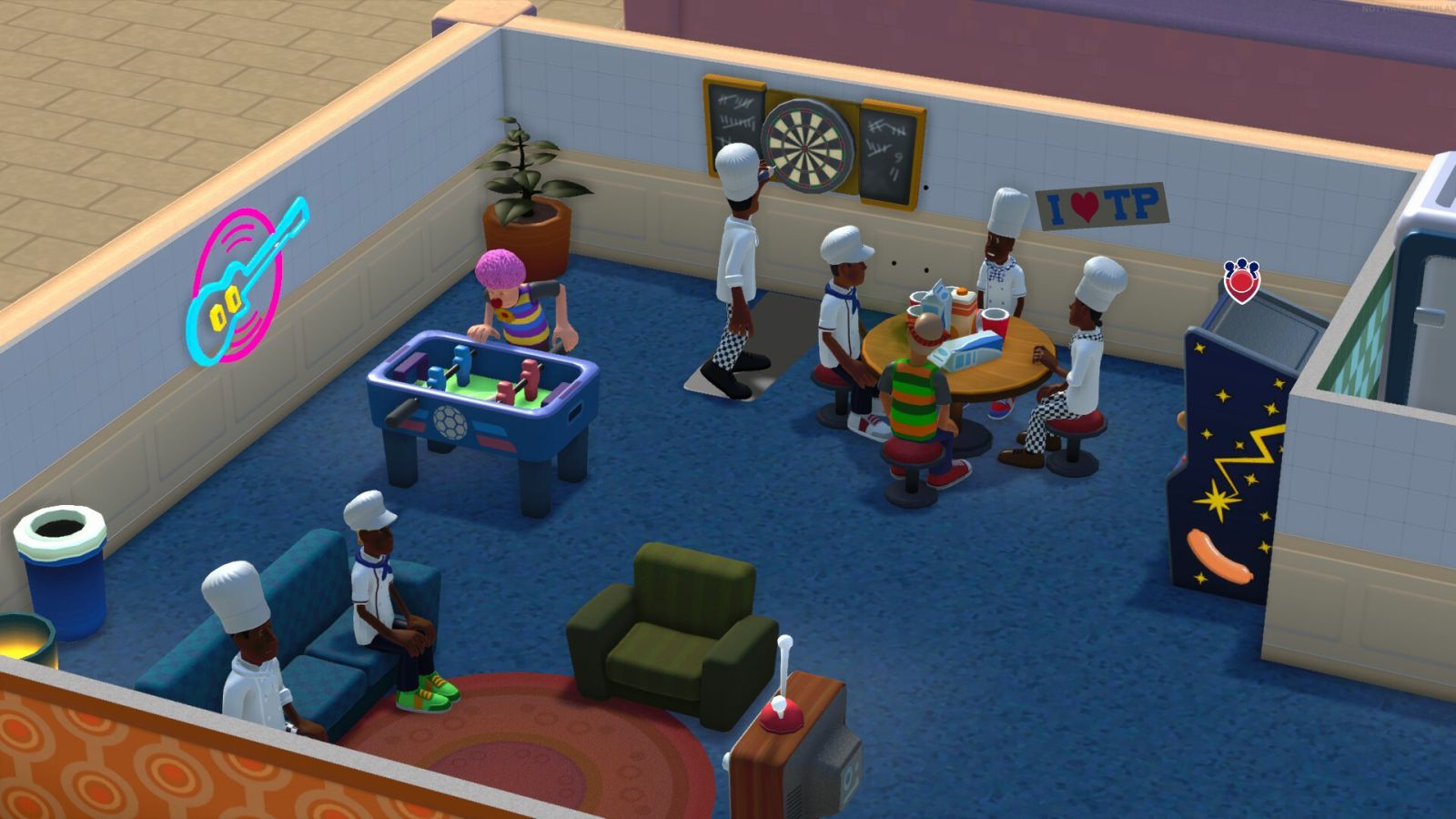 One of the things I enjoyed about the construction portion of Two Point Hospital was the ability to pick up an entire room and move it. Sometimes you build with the amount of money you have on hand, or you find certain rooms to need a little bit more space than they started with. In Two Point Hospital, all of these rooms were generally some variety of square, but in Two Point Campus there are a number of new build options. There are pre-built layouts if you aren’t into the building and placement portion of the game, and you can now build quirky shapes as well. Paths are equally as flexible, and the outside of your campus is now just as important as what’s inside. Fountains, walking paths, decorations, and places for your faculty and students to catch a quick bite are just some of the choices. You can even dress up your staff in different outfits to ensure you can easily spot them amidst the student body. It’s your campus, so lay it out and dress it up however you see fit.

Have you ever wanted to play the movie Accepted? First, that’s an amazingly fun film, and you should see it immediately. And second, of course you do! Well, Two Point Campus is precisely that. Setting out with little more than a bag of money and a small plot of land, you’ll build your completely insane college. Set up to educate the rudderless brains of your students, this is a bit different than serving the sick and infirm in Two Point Hospital. No, here you’ve got to love the one you are with, at least for four years anyway. But I’m getting ahead of myself – your staff and students would probably appreciate a place to learn, sleep, and study besides next to the fountain where the hippie won’t stop playing the guitar… 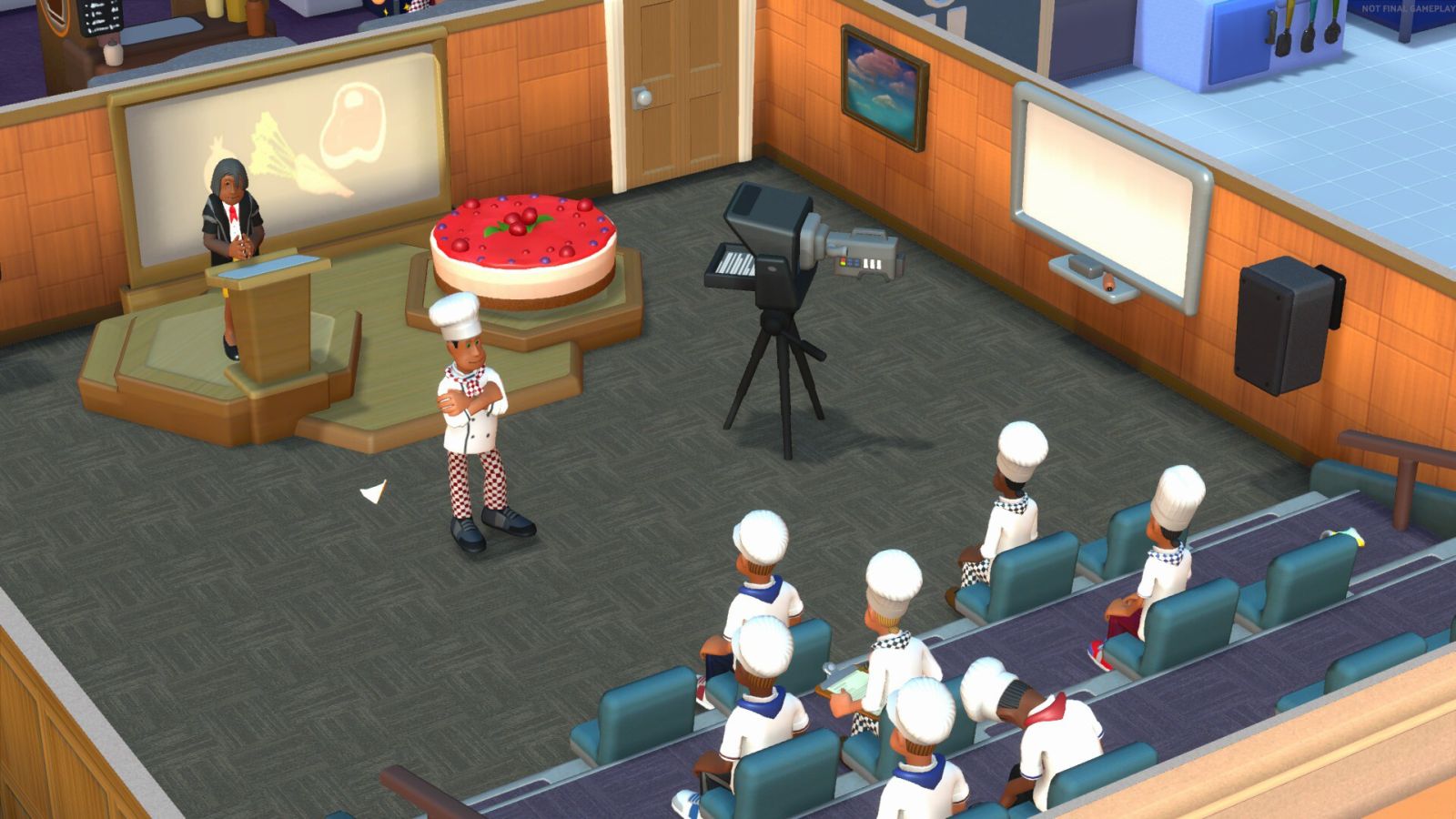 You’ll start your build during summer break – this is when you perform major construction and get ready for students. You can spend as much time as you want getting ready before you start the academic year, setting up dorm rooms, staff and student lounges (separate please!), buying up adjacent buildings, and performing research. The summer break is your reset point to take a breather and prepare for the next batch of freshmen eager to start their career in…lemme check my notes here…”Knight School”? Surely that’s not right, becoming a Knight as a profession? Oh, it is. Well we’ll see you back at Two Point Campus teaching others these skills because you aren’t getting a job in the real world…

Laying out your campus, you’ll see the absolutely bonkers contraptions you’ve come to expect from a Two Point game. To teach aspiring chefs you’ll need a lecture hall, to be sure, but more importantly you’ll need a kitchen. Laying out a handful of washing stations, cutting boards, and ingredient bins, you’ll then place a massive contraption that would look equally as home in Willy Wonka’s Chocolate Factory. Who wouldn’t want to make a two foot thick pie easily 10 feet in diameter? 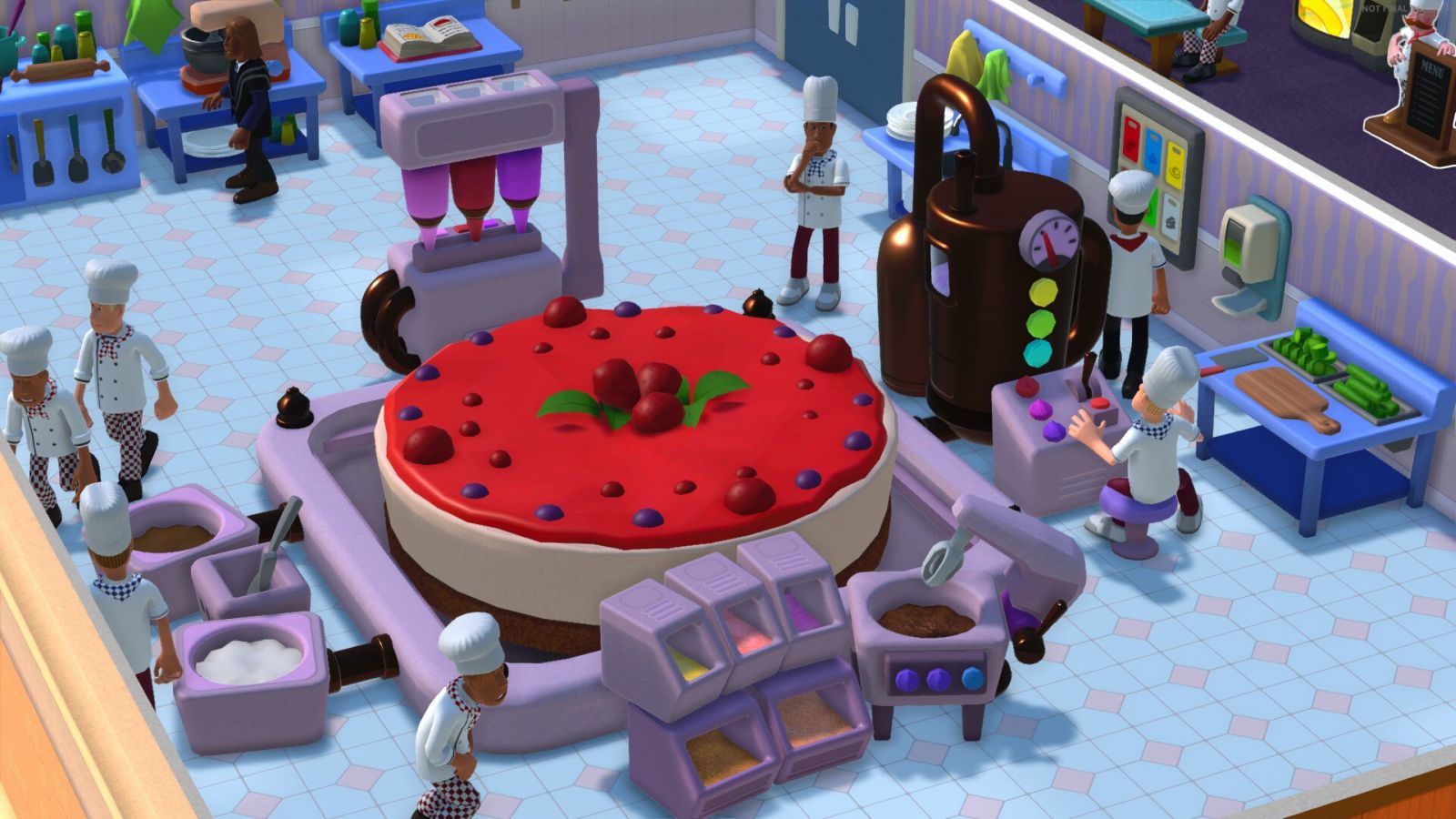 In Two Point Hospital, you had a constant influx of wacky patients of all stripes, so you were all but required to have every type of machine on hand lest you end up with a lot of dead folks in your hallway. Here, you are free to focus on all class specialties, just a handful, or anything in between. If you want to turn out the best possible Clown College, well, there’s a Trump University-sized hole in the market for you to fill. You can focus anywhere you see fit, giving you more freedom rather than simply collecting whatever is next on the list, and I like that.

Keeping students happy isn’t just about money (it mostly is…) but also about academic growth (their growth means more tuition!). Happy and well-fed students perform better in school, earn better grades, and ultimately represent your college in a better light, helping you dupe, I mean “recruit” more students. That means ensuring they have a variety of places to eat, drink, play arcade games, hit the foosball table, or vegetate in front of the television. The objectives we’ve seen so far require happier students and staff to pull in those additional stars beyond the bare minimum, so maybe staple up a poster here and there? 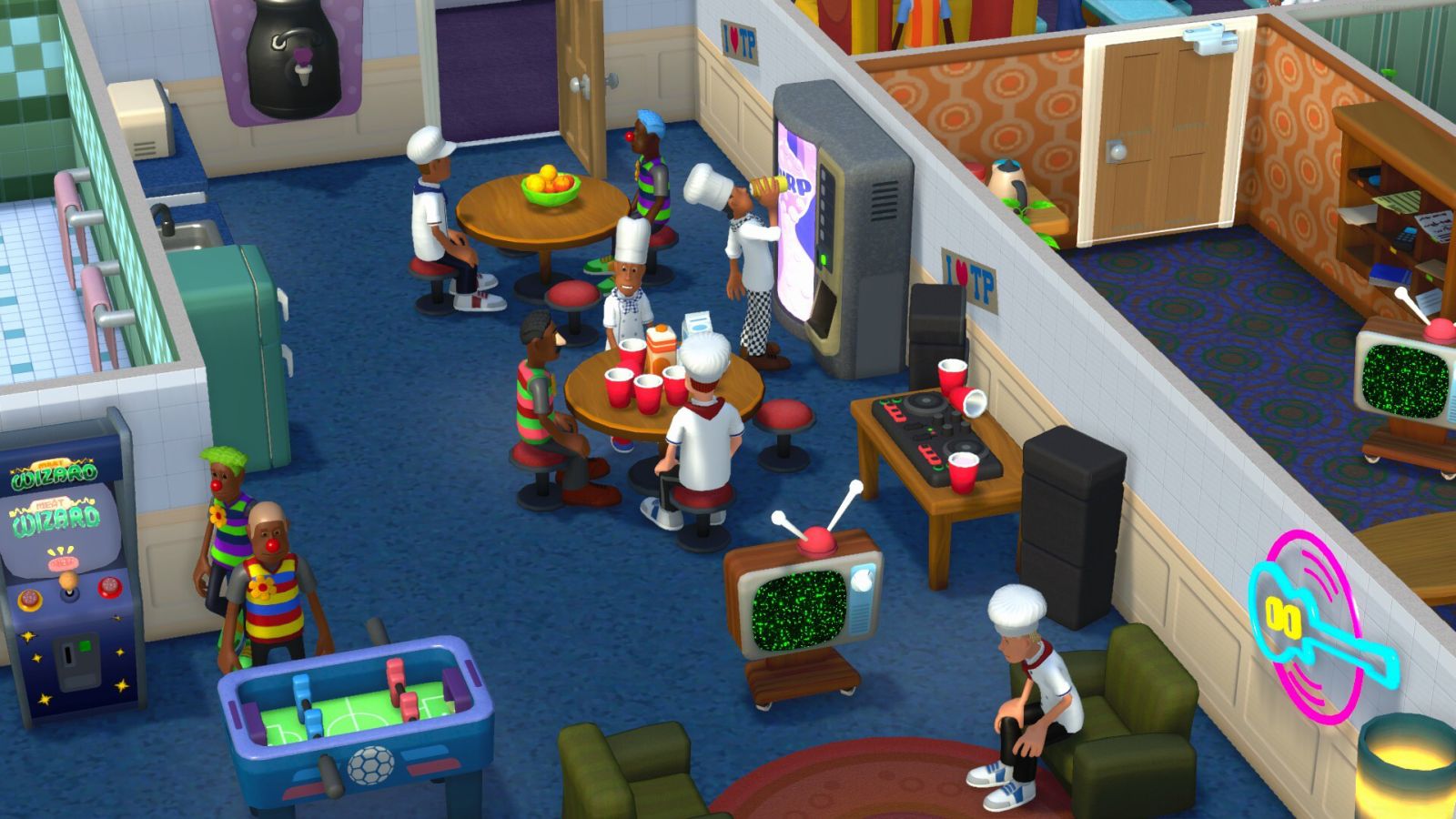 Seeing the team spread their Cheesy Gubbin-greased wings and take to the sky with Two Point Hospital was a real treat, and it’d be very easy to look at Two Point Campus and assume it’s just a reskin, but you’d be dead wrong. Like an Upper Decker in the Dean’s office toilet levels of wrong. There’s a ton of new features and fun on offer, and it feels like the team really found their comedic stride with Two Point Campus. It’s easily one of my favorite franchises, and after playing it for two days straight, is now squarely in the top tier of my most-anticipated list. 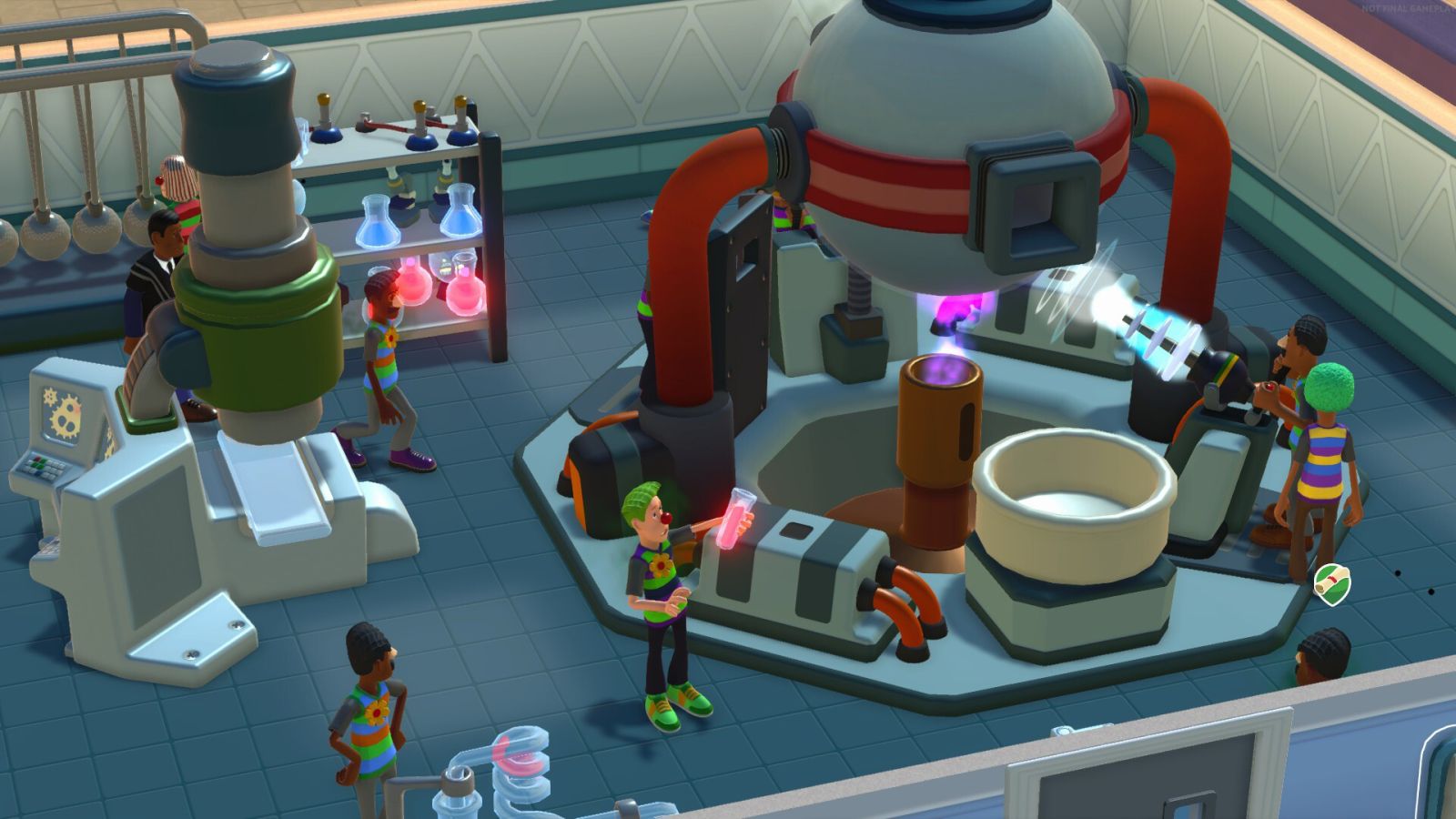 Unfortunately the good news about the game comes to a screeching halt if you were looking forward to having your hands on it in the very near term. The team needs a little more time to polish that golden toilet – the game’s release has moved from May 17, 2022 to August 9, 2022 when it releases on PC & Mac, PlayStation 4|5, Microsoft Xbox One, Xbox Series X|S, Xbox Game Pass for console, PC Game Pass and Nintendo Switch, but simultaneously this time around!
Stay tuned here at Gaming Trend for all your previews, reviews, and news!