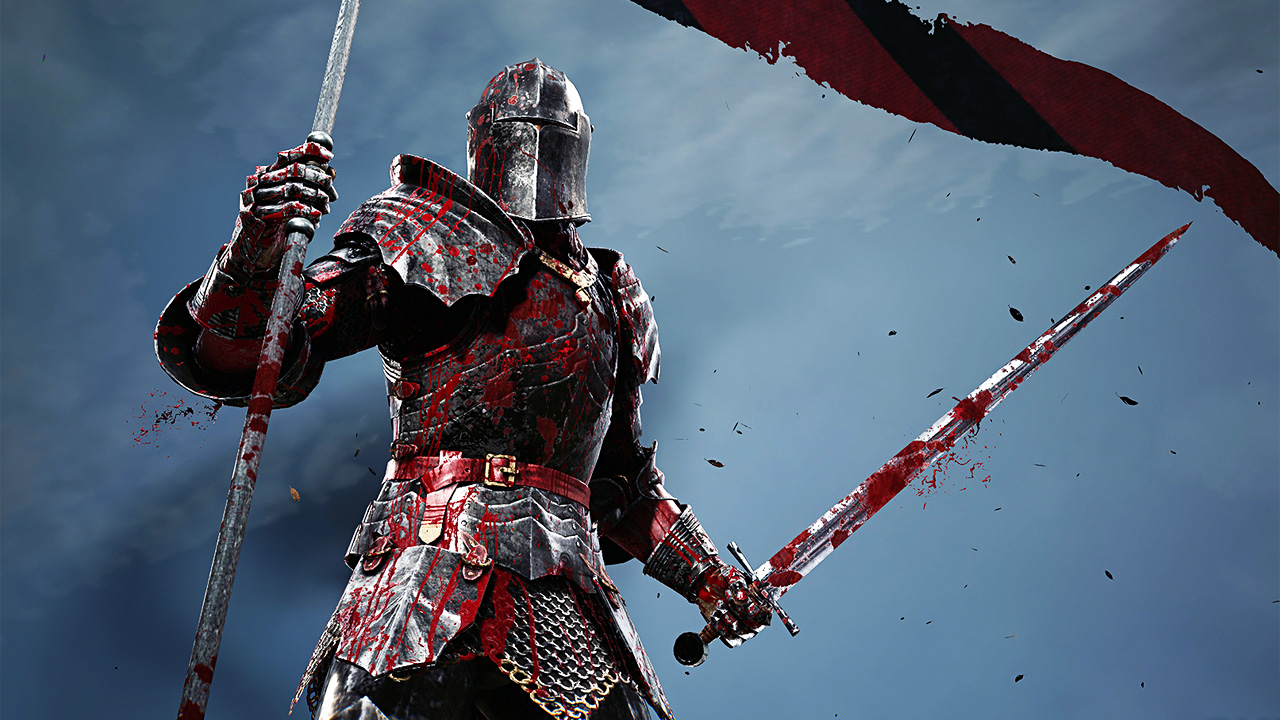 It’s a rough deal, being born a peasant. Supposing you can survive the infant mortality rate of 25%, you somehow dodged the black death, you still have to deal with famine, food poisoning if you can get food, “doctors” who are as likely to kill you as heal you, and then there’s that whole conscription business. You see, rich Lords who can’t be bothered to fight their own battles occasionally decide that they’d rather have some dumb peasant go fight wars for them, and that’s where you come in. With a halberd thrust into my hands, it was off to five minutes of training! Seems like being poor sucks at all points in human history.

If you are just getting up to speed, Chivalry II is a medieval battlefield simulator, locking a staggering 64 players into mortal combat as they cross swords in support of their liege and their claim to the crown. I can’t say it better than indie developer (they are about 35 strong at present) Torn Banner, with Mark Addy summoning his best Robert Baratheon to give us the details:

We’ll have to set the battle between the Mason Order and the Agatha Knights aside for a moment as our recent hands-on time with the game was bound exclusively to the multiplayer aspects. Teaming up with some fellow press and the team at Torn Banner, as well as a few surprisingly smart AI friends, I put in more than a few hours behind a pike in an early press preview, and lemme tell ya…I did not see this coming.

I never played the original Chivalry, so I can’t make any comparisons, but hearing how excited the developers were about the fresh animations, bumping to 64 players from 24 and the vastly expanded battlefield scale, and oh-so-much high-resolution color-corrected gore and dismemberment thanks to a move to Unreal Engine 4, it’s clear that this more than a marginally improved sequel.

My first few rounds in the field were probably much like a peasants first trip to the mud and blood. I flailed around, swinging wildly, and I hit as many friends as foes. Kills were often accidental and frantic as I tried to backpedal and get my footing, andI didn’t even bother trying to use items. By my fifth battle I was comfortable with my halberd’s range, able to swing it outside of the range of any sword and using thrusts to keep axe-wielding foes at bay, and by my tenth battle I was blocking, countering, using feints, and absolutely lethal. Chivalry II is a game where proficiency with your weapon is about timing and mental fortitude, remaining calm in the face of overwhelming and impossible odds.

Each weapon in the game behaves slightly differently, but most operate on a few concepts that’ll make the difference between life and death in the field. Polearms have reach, but they are slow. Swords lack reach, but are fast. Daggers are even faster, but that’s for very close work. All weapons can be blocked, but it’s feints and reversals that’ll win the day. Letting a polearm strike come down from above, deflecting it at the last second to cause it to roll to the side, and then using the superior speed of the sword combined with a thumbstick pull in the direction you are swinging to help with that speed will often dismember or decapitate the target before they’ve recovered. Getting the timing to not only stop a blow, but roll it is the key to advanced gameplay, and figuring out the timing of each weapon so you can use it as well as counter it is a matter of practice and precision. Definitely a worthwhile investment as it’ll allow you to dominate on the battlefield. All this is covered in the tutorial video above, but remembering to do it when you are bathed in blood and there’s screaming all around you is another matter entirely.

Being flexible in battle is important to staying alive, and Chivalry II does this well by letting you grab any weapons and ammunition you find in the field. Recovering an arrow from the skull of a foe only to loose it upon his friends is possible, as is dropping your halberd to grab a mace and shield when facing off against other shield-wielding foes. This flexibility lets you change up your tactics and tools to match the fight at hand.

While the blood and guts are flying everywhere, and you find yourself locked sword on sword in a fight for your life, it’s reassuring to hear your stalwart warrior screech “WHAT IS HAAAPEENINGGG?!”. Ok, so not everything in Chivalry II is serious. In fact, during my play session I saw someone use a chicken as a weapon, and I’m happy to say I’ve murdered someone with a rather large fish. Anything in the environment can be used as a weapon, and there are often hidden opportunities around every corner. A scorpion that can be used to defend a castle against incoming invaders does a fine job in keeping your position safe when swung around the opposite direction. A shield can be planted to duck behind to take shots with a bow. You can even throw a torch at someone and set them on fire. The Torn Banner team wants to offer up as many opportunities for improvisation as possible, and it shows. There’s nothing more embarrassing than being killed by a peasant with a wriggly salmon, but there’s also nothing more terrifying than beheading an enemy, holding it aloft, screaming your battlecry, and then lobbing the head into your throng of foes as blood pours from the neck to spill on your spaulders. Medieval times were a bit on the M rated side, kids.

While we aren’t allowed to show it yet, there is an absolutely staggering amount of cosmetics in the game. Both sides of the battle have a footman, vanguard, knight, and archer class, and each one of those have an eye-watering amount of cosmetic choices for their weapons, armors, characters, voice lines, and more. Whether you want to look like a filthy peasant or a Dame Commander, there’s a choice for you. The developers made it a point to advise that they are taking a more period-correct approach to cosmetics this time, ensuring capture “varying levels of badass” looks rather than an “anything goes” approach. 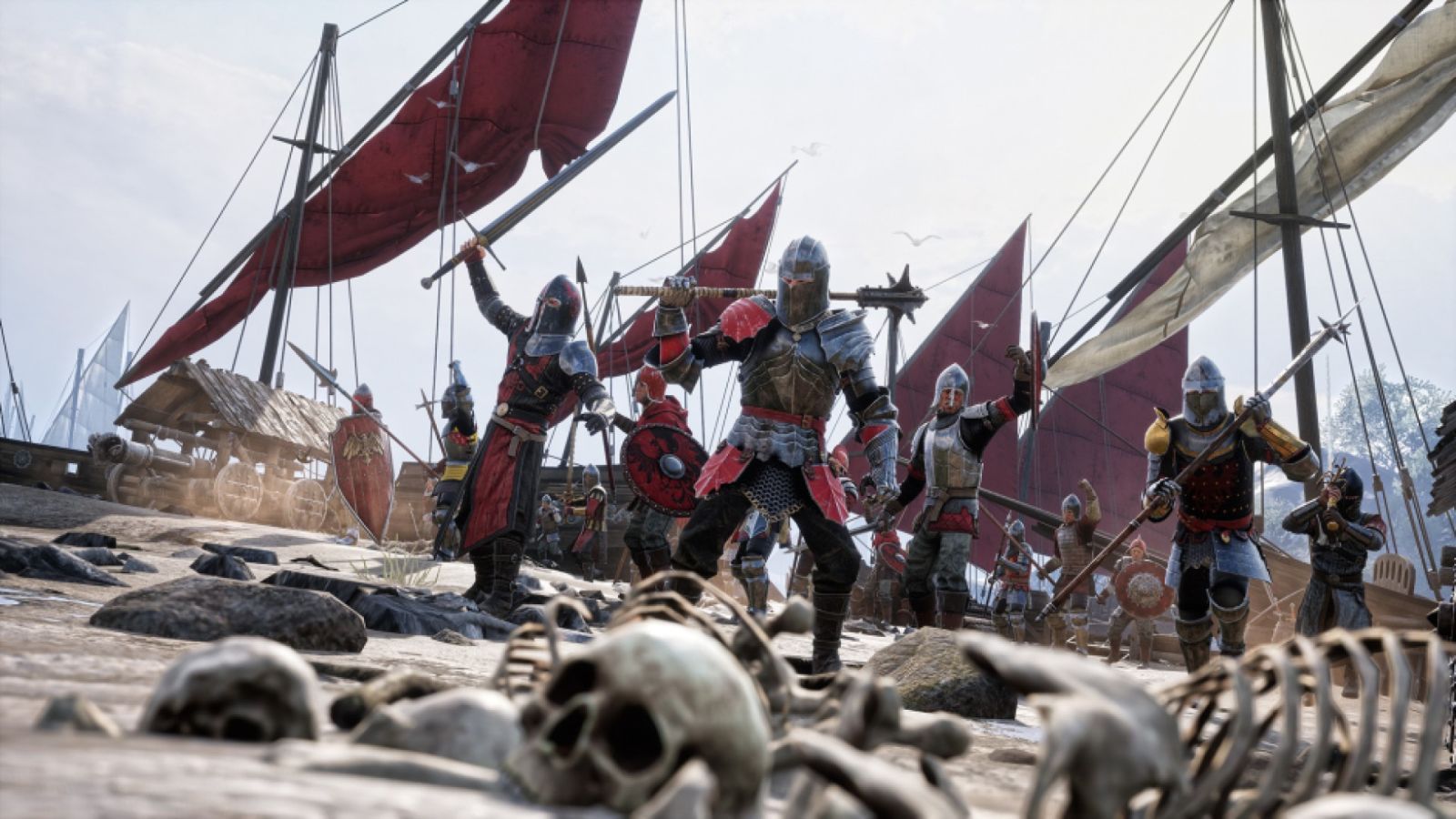 One of the aspects I’m enjoying about Chivalry II is castle siege maps. Roaring up the battlefield and taking possession of a siege tower is a rush, but getting that tower to the castle walls, throwing hooks and planks over the battlements, and then rushing over and into the fray is exhilarating. It’s far more risky to roll a battering ram under the barbican to hit the main portcullis as the enemy can drop rocks and oil on you, but it’s a more direct route to the inner bailey. You can always climb ladders, but that leaves you exposed. However you choose to assault the castle, you’ll have to be mindful of powerful ballistae as they lob tree-sized bolts into your incoming forces. It’s dangerous business, but with 64 players battling it out, it feels like a real accomplishment to either successfully defend or break those defenses and siege the castle. Just be mindful that trapdoors can kill friends or foes — it doesn’t care which side you are on.

Saving the best for last, there is one aspect that came as a total surprise — crossplay. Chivalry II will be coming to PlayStation 4 and 5, Xbox One and Xbox Series X, and the Epic Store, and you’ll be able to play against any players on any platform. This should keep the server player counts high — the lifeblood of any multiplayer-only game.

I wasn’t sure what I was getting into when I jumped into this early look of Chivalry II, but the moment to moment action, customization, and incredibly tight combat mechanics have me absolutely hooked. If you are a fan of visceral team multiplayer, this is one to watch.

Chivalry II has an open beta starting from April 23rd through April 26th for players who have pre-ordered, and a full release on June 8th, 2021.