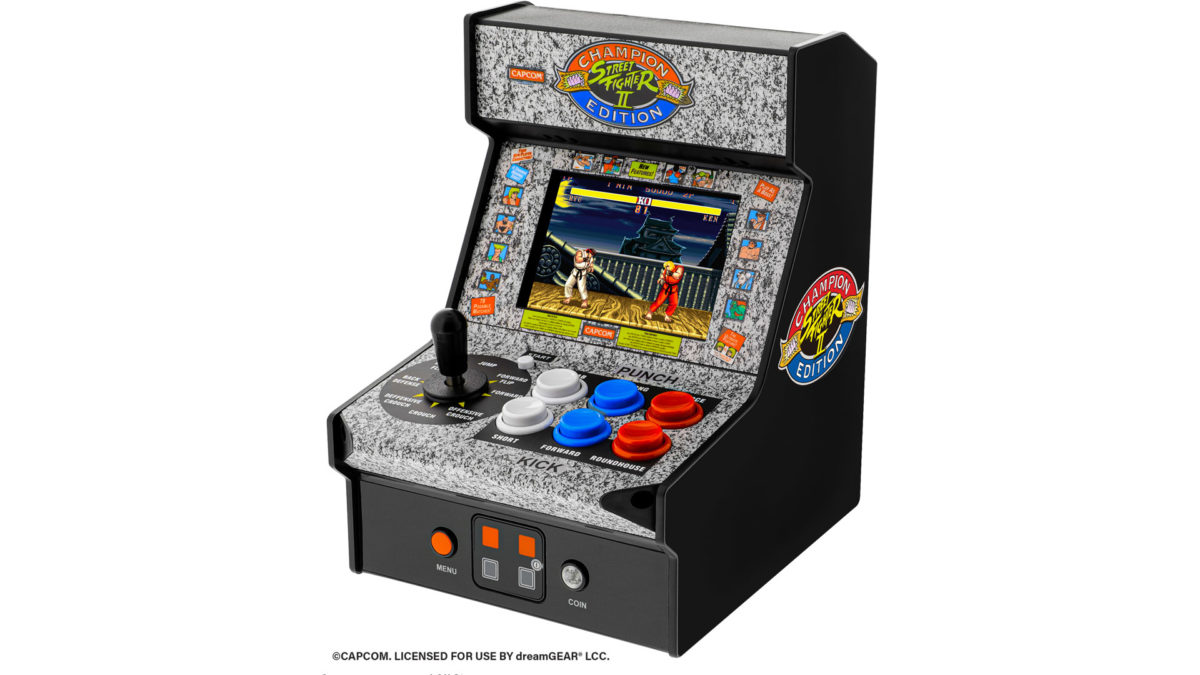 Retro arcade collectibles are all the rage currently, from Arcade1Up’s 3/4th size cabinets, New Wave Toys foot tall replicas, to AtGames Legends Ultimate Arcade, there is no shortage of choices for those collecting remnants of the past or building the ultimate game room. Enter My Arcade with their Street Fighter II: Champion Edition micro arcade, an officially licensed small scale replica of the original Street Fighter II arcade which is available now at Target and other online retailers for a suggested MSRP of $49.99. The micro arcade looks to be a great low cost product for those not willing to spend $400 on an Arcade1Up or $100+ for a New Wave Toys replica but still wanting a quality product. As a huge fan of all the above mentioned arcade products, here’s hoping I’ll be able to add this micro arcade to my collection soon!

Created in partnership with CAPCOM®, the Street Fighter™ II: Champion Edition Micro Player is a 1/10th scale replica of the original 1992 arcade cabinet, complete with its signature six-button layout and Fight stick which feature mechanical switches. Standing at 7.25” tall, with a 3.5” backlit display, players can duke it out against AI-controlled fighters or compete head-to-head using My Arcade’s CO-VS™ technology. Retro gaming enthusiasts and casual fans alike can take a nostalgic trip down memory lane and relive their glory days at the arcade right atop their desk.

“Street Fighter II is a legendary game and one that is special to fans worldwide. It catapulted the fighting game genre into one of the most popular forms of entertainment around the world and introduced new features that have become a staple in modern fighting games,” says Amir Navid, SVP Product Development and Creative Director, at My Arcade. “Our Micro Player captures the nostalgia of this gaming icon in a small but fully playable collectable. Ideal for any home and small enough to take with you everywhere. We’ve added features to let you go head to head with friends, and there’s even some cool hidden features that we hope fans will enjoy”

Assets for the Street Fighter™ II: Champion Edition Micro Player can be found in the press kit here.

Keep up with My Arcade’s mission in bringing arcade nostalgia straight to your tabletop at myarcadegaming.com, Instagram and Twitter.

Stay tuned to Gaming Trend for future My Arcade news!