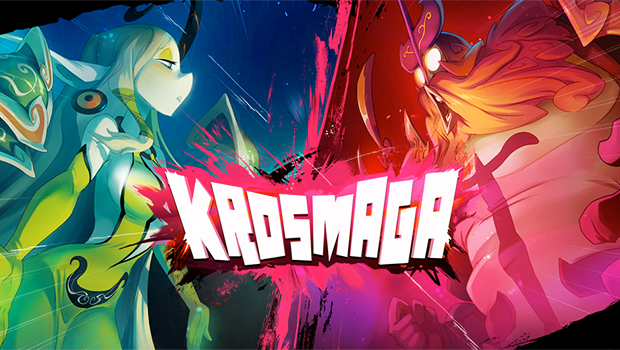 Have you ever thought, “Gee, I really like Hearthstone, but I wish it had a board game element to it”? If so, you’re in luck! Ankama Studios, a French entertainment company, has launched the beta of Krosmaga, the Card Game of the Gods. Ankama is not new to the world of gaming; they have built a rich universe spanning several video games, Dofus and Wakfu being the best known, as well as an animated series, Wakfu. Just as Blizzard draws upon its vast universe of characters, monsters and spells in Hearthstone, Krosmaga comes to life thanks to a combination of lush graphics, smooth animations, and  the rich world, characters and creatures Ankama has previously created.

Krosmaga is similar to Hearthstone, but with an added board game element

Ankama’s world is known as the Krosmoz, but the collective series focuses on one planet, called the World of the Twelve. As the name suggests, this world is populated by 12 different races, each with their own god. These gods are bored, and are forbidden from fighting, as doing so could rip the Krosmoz apart. In order to keep themselves entertained, the clever and catlike Ecaflip God invented a game where the gods summon heroes in order to destroy two Dofus (magical eggs) belonging to their godly opponent.

Hearthstone players will be familiar with the basics. Pick a god, build a deck based off the creatures and heroes that god can summon, and challenge an opponent. A coin flip decides who goes first, and the player moving second receives an extra card. Unlike Hearthstone, cards come to life, and units are placed on a five-lane board. Once placed, units are removed from the player’s control, and will march toward the opponent’s end of the board, fighting anything in their path until they run out of health or reach and destroy the opponent’s Dofus. It is the board game play which sets Krosmaga apart, and makes it something more than a simple ‘me too’ game.

Pick a god and build your deck, though you’ll have to poke a few demons to get your cards

While there are five lanes and five Dofus to attack, each god only possesses three real Dofus. Two fake eggs are disguised and placed in random lanes, and while destroying these may waste the time of your opponent, doing so gives them an advantage by allowing that player the ability to start their units further down the board. Many cards have useful bonuses beyond simple movement and attack. Some characters can heal another unit when first placed on the board, Cra archers can force an opponent’s unit back several squares, and the berserker class of Sacriers can deflect damage from one of their units onto a different allied unit.

Some cards have abilities, such as healing and crowd control

Some decks are easier to master than others. I found the Cra Goddess’ deck to be very much to my liking. The ranged attacks of arrows and the ability to force distance between myself and my opponents made for several easy victories. The gambling nature of Ecaflip God can be incredibly powerful, as a coin flip can allow your Ecaflip to survive a killing blow, but they can also be an incredibly high risk, as some Ecaflip units must be summoned with a coin flip–heads and the unit is summoned to lane, tails and that card is added to your opponent’s hand. Learning the playstyle of each deck unlocks more strategic play, allowing you use tricks and quirks of each class to your favor, regardless of if you are playing as or against them.

The game rewards active players not just with experience, but with quests, such as “win a game using the Iop God’s deck,” for extra in-game currency, and tokens for logging in daily, which can be used to spin a wheel for prizes, including rare cards, in-game currency, and more. Some cards within the game, such as Goultard, even have their own experience point system. These cards grow stronger each time they are used in a game, eventually evolving to become a new, more powerful card.

Krosmaga has lots of ways to gain in-game currency, including quests and a roulette wheel

Krosmaga is overflowing with character and a quirky sense of humor. All Ankama creations have a distinct style, and Krosmaga really makes this shine with a host of plentiful and beautiful animations. Fans of the Wakfu show will be delighted to see that you can summon Yugo and the gang, as well as several other heroes from across the Krosmoz into battle; those new to the World of the Twelve are sure to fall in love with the pluck of the chick-like Tofu birds, the unbridled glee of the Eniripsa Goddess, and the outrage of the card-holding demons, who you must poke until they explode in order to unlock new cards for your deck. While still in development, Krosmaga is already incredibly stable, feels very balanced, and has a decently intelligent matchmaking system.

Krosmaga is currently in beta, and those with an invite can play on Mac and PC. Upon release, it will be free to play, and will also be available on iOS and Android. Ankama has not yet announced a release date, but you can learn more about the game at their official website.