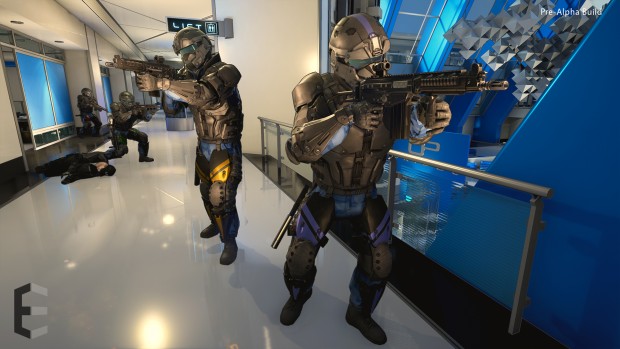 The idea of a squad of highly trained operatives infiltrating a locale with unknown numbers of terrorists warms the cockles of my heart. Perhaps it has to do with all those years of playing the original Rainbow Six games at LAN parties, but when I read the description of Epsilon on Steam with its AI and cooperative modes including overhead maps and waypoint systems I gladly volunteered.

I should start by mentioning that the game is available now on the Steam storefront as an “Early Access” title, which basically means that you get a playable level and a bare feature set right now of an unfinished game. As Serellan’s development team progresses and more content is added, existing customers get all the extra content for free while the store price gradually rises to the intended $40 USD price point. There are a significant number of features that are slated to be added – however with a team of five and a ton of work to do, Early Access users also have a lot of sway in which features should be done first, as well as providing valuable feedback.

So what do you get for your eight dollars right now? Currently there are two game modes – Elimination and Story Mode, and a single map. Future features include different difficulty levels, non-lethal weapons and a host of gaming improvements, and the opportunity to deliver feedback which can help shape the game.

Epsilon is, as of right now, a solid tactical shooter experience. Despite rough edges, the gameplay shines as being shot hurts, lives matter, and “guns-a-blazin’” is a quick way to die. Squad controls and tactical creeping are the order of the day, so don’t expect that Rambo’s headband is going to absorb damage, and there aren’t health kits or regeneration to save you. Bullets bring death, and since you can’t swap to control AI teammates don’t be thinking your squad is there to provide three extra lives. Note that there is a co-op mode listed, but is currently unavailable
The other side of Epsilon comes in the form of setting waypoints and coordinating attacks. You can plan your attack where your crew works apart from you to follow waypoints set and clear another floor while you creep along solo. While Elimination games give you access to floor plans, Story Mode takes it a step further and you can explore the areas using existing security cameras to tag enemies and get a fantastic view of the layout. Unlike old Rainbow Six games, however, you can update your plan as you go along, so don’t be shy.

The graphics and audio are serviceable, and as this is Early Access I don’t knock them, however positional audio isn’t really there and the one level included is sparse in detail. I fully expect Serellan to step up the presentation as the development moves forward. Directing AI teammates and their pathfinding is alright, but sometimes you may find your squad travels on the wrong side of a wall – this was while using ad-hoc commands rather than instructing them to use waypoints, mind you.

There is a charm to seeing the bones of a game just being built, and certainly one as compelling as Epsilon. The callout to pre-Vegas Rainbow Six titles including Eliminations’ answer to Terrorist Hunt has me excited to see what Serellan can pull off. Furthermore, squad-based tactical combat has been trending towards no storyline (see Titanfall, Evolve and Rainbow Six: Siege). If ground-floor access, playing a solid game, and supporting a talented development team is something you can see yourself doing there are worse ways to spend eight dollars.