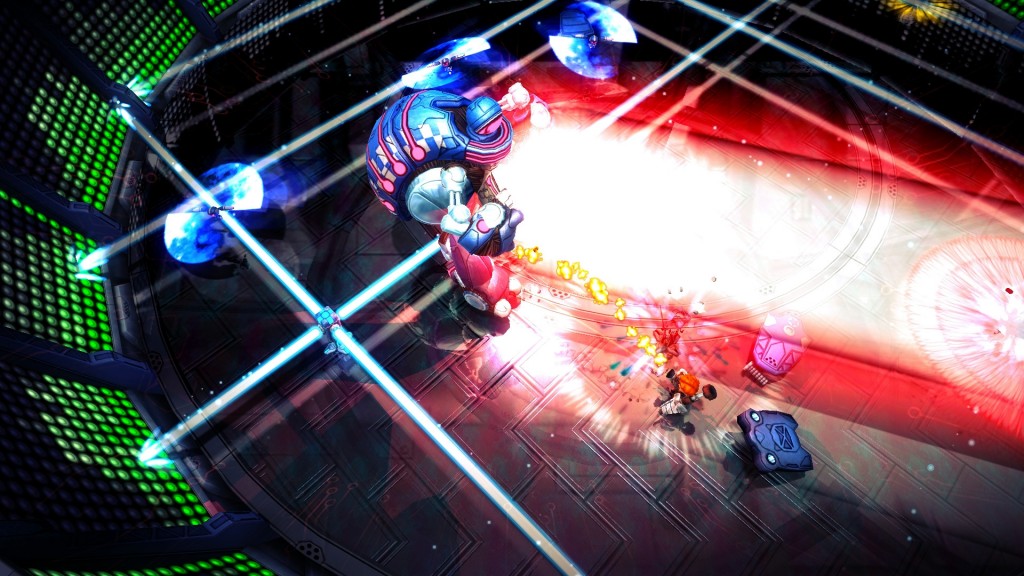 Witch Beam’s Assault Android Cactus takes the mechanics of a top-notch twin-stick shooter, adds a gorgeously polished array of enemies and slick controls, and polishes the whole thing off with a cast of android heroines that look like a bunch of Cabbage Patch Kids decked out with high-tech armor and guns.  It’s fun, it’s frantic, it’s even hypnotic, and if at $14.99 USD MSRP in the Steam Store, it’s a must-have for anyone who craves high-octane bullet hell bliss.

Assault Android Cactus takes place in a sci-fi world where a whole bunch of robots have turned against their human masters. Why? To be honest I’m not completely sure – I was too busy shooting things – but at this point my money is on ‘they’re just doing what everyone expects them to’. Seriously, I can’t remember playing a game set in the future where the robotic appliances didn’t stage a rebellion at least once during the course of the plot, and I was way too busy pumping plasma rounds into slickly-modeled enemies to pay much attention to the whos, whats, wheres and whys of this game. What’s important is that, their shocking super-deformed adorableness aside, each of the 9 androids in the game stand well apart from each other in terms of weapons, appearance and personality. The latter part is the main story hook, as their short spurts of dialogue with the various bosses change depending on who you’re playing – the writing may be short, but it’s entertaining, and that’s a solid plus on top of the gameplay.

No, he’s not firing that from where you think. He’s a robot, they don’t even have those parts.

Before I get to said gameplay, let me get this out of the way: the bullet points. Straight from the Steam page, here’s the succinct summary of what Assault Android Cactus offers up to the prospective player:

The playable androids all share a common health mechanic – energy slowly drops as time continues, requiring the player to pick up batteries dropped by the enemy to recharge. Drop too low in health and it’s game over and time to start that level over from the beginning. That similarity aside, as I’ve noted, the 9 androids are distinct – each gets their own look, personality and arsenal. Said arsenal comes in the form of one main weapon, and one ‘special’ weapon – a steady stream of bullets and a short-range, high-power flamethrower is one example. Each android I unlocked felt like a new and different experience in terms of dealing out high-tech death to the robot swarm, and the accomplishment of making nine truly unique-feeling androids is not to be underestimated.

In fact, the whole game feels polished to perfection. The enemies are all gorgeous, alternating between the appropriately irritating cannon fodder and the challenging yet fair bosses. Personality pops out of everything from the environments to the menus, and it’s enough to almost make me feel bad for skipping past some of the cut scenes to get back to the action. The bullet hell aspect of the game is clearly coded by professionals who know what they’re doing and set out to make a game that’s not just challenging, but draws the player into the hypnotic trance-like state of riveting gameplay. On that front, they’ve struck gold – this is an awesome game that stands out in the genre.

Hey, didn’t I see those hoverdrones in Metal Gear Solid?

There’s also an immense amount of replay value for completionists. The Daily Drive offers up a fresh challenge each day, there’s a ton of game-modifying options to unlock, along with more ‘flavor’ unlocks like CG stills and fan art. The only thing missing is online co-operative multiplayer, which only merits a mention because the game offers local co-op. I can understand the technical reasons why online multi is a no-go, but I’d really enjoy going back to back with an online friend to rack up a high score with.

If you like throwing yourself into a hypnotic trance of bullet avoiding, robot-blasting mayhem, add Assault Android Cactus to your collection. And if you’re intrigued by the prospect but not totally sold, be sure to check out the demo. If that doesn’t sell you on this beauty, nothing will.

A top notch bullet hell experience racked out with character options, unlockables, and some charming dialogue, Assault Android Cactus is a top shelf choice of any shooter addict. A lack of online co-op is unfortunate, if understandable, and the characters - while cute and expressive - may be a bit too adorable for some.

Victor Grunn has been a gamer since the days of single-button joysticks and the Atari 800XL. When not lamenting the loss of the Ultima series or setting people on fire in Team Fortress 2, he's an aspiring indie game developer and freelance writer.
Related Articles: Assault Android Cactus
Share
Tweet
Share
Submit