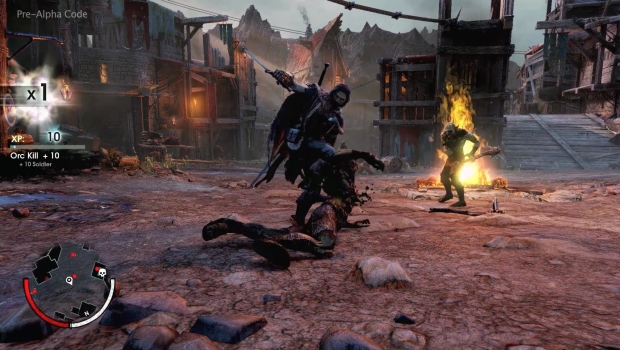 Shadow of Mordor is ambitious, it’s trying to be a lot of things at one time, and, based on my short hands-on with the game at PAX Prime this weekend, I’d say it has a good shot of succeeding. It’s an action-focused game that throws you into a massive battlefield and gives you the freedom to determine how you want to kill your enemies.

The combat can be fairly straightforward, I dueled with enemy Orcs, slashing them down with my sword, countering their attacks with properly timed button presses, and executed them in a cinematic fashion. I also opted to sneak up on enemies occasionally and kill them silently. Or, if I wanted to be really fancy, I would toggle a sort of “spirit” mode which allowed me to do instant dash attacks from a distance. Again, the game is generous with ways to win a battle.

One of the coolest features of the game is the ability to mount things, like Orc Dogs (I can’t remember what they’re actually called) and giants, bending them to your will and using them as a mode of transportation and as a weapon. The Orc Dogs were actually quite instrumental in getting me around the battlefield quickly, as running everywhere certainly wasn’t the most time-effective option.

Expect to climb a lot in this game, Assassin’s Creed style. Unfortunately, it doesn’t have quite the same finesse as AC when it comes to traversal mechanics, which is probably the biggest issue I have with the game at the moment. It’s way too easy to climb stuff on accident causing you to clumsily scale up and down walls as you make your way around the map. The camera also needs more work, it hangs way too close to the player making it difficult to navigate at times and unfortunately compounds the climbing issue. With a month until release, I truly hope there’s time make refinements.

The game has what’s called the Nemesis system which allows you to plan a strategy outside of the battle, giving you intelligence on your enemies such as their strengths and weaknesses. From there you can mark who you plan to kill – in my case, I went with the option of literally turning a war chief’s bodyguards against him. The Nemesis system adds a welcome layer to the gameplay where you can relax a little and think ahead.

I walked away impressed by the scope of Shadow of Mordor but concerned about how it will execute. The combat is fun and, being based on The Lord of the Rings franchise, there’s great cutscenes and story content that should go a long way towards keeping you motivated to see the game through. If the problem areas are tweaked and tightened, there’s no reason we shouldn’t have an amazing game to look forward to.