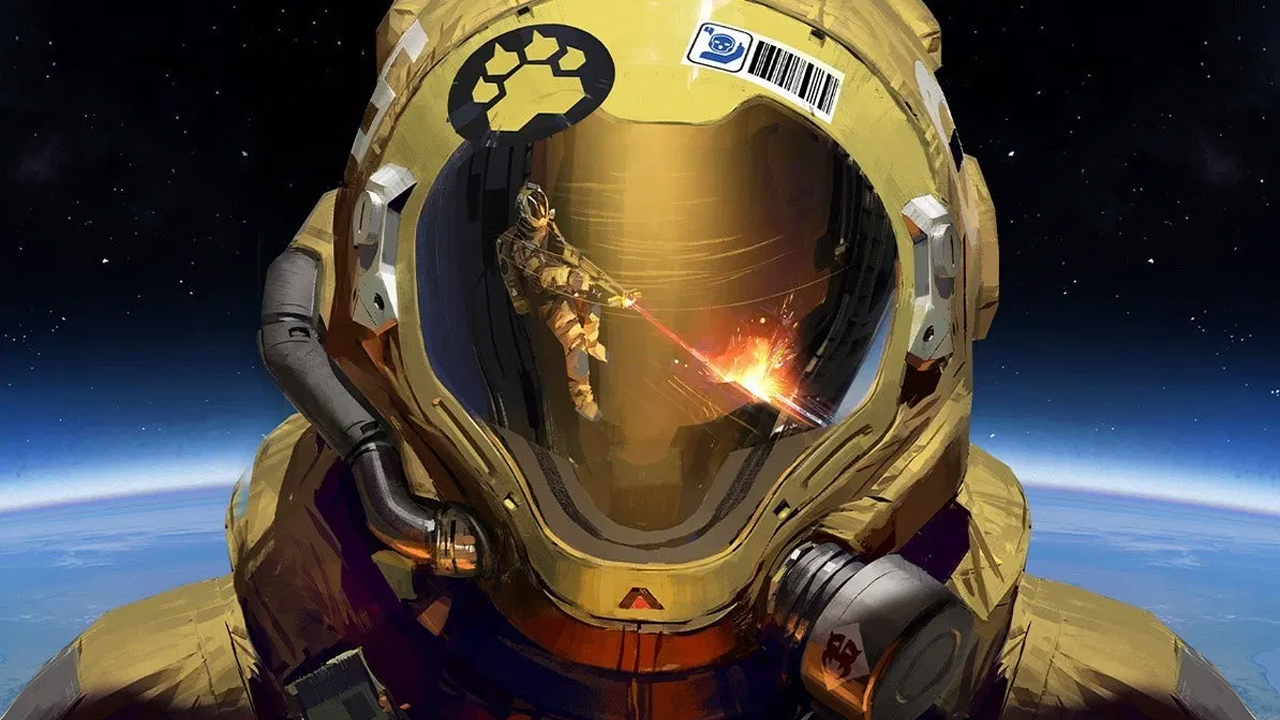 You exit your habitat, work order popping up on your HUD — you’ve got a ship to rip apart. Oops, you tore a hole in your suit as you exited the airlock — death by asphyxiation. Cracked your helmet as a rogue piece of aluminum goes zipping by? Yeah, that’s your life-saving O2 leaking out again. Accidentally cut a little too far into that bulkhead? The ship’s fuel tanks are behind there, and you just found out what explosive decompression feels like. Working in space is tough and very dangerous. Welcome to Hardspace: Shipbreaker.

Blackbird Interactive, the team behind Homeworld: Deserts of Kharak and the eventual Homeworld 3, have taken a hard left to do something completely different from anything we’ve seen before. They put you in the boots of a Shipbreaker — a space mechanic responsible for breaking down and sorting the component parts of massive derelict ships. Well, like any good job, you have to buy your way in, leaving you a billion dollars in debt. Yeah, that’s not a typo — billion with a B.

Your job comes with a little on the job training, as well as a bit of mentorship from an old Shipbreaker. He walks you through a bit of the basics, as you’ll see below, and then turns you loose to get to work with a mountain of debt, two cutting lasers, and a spacesuit. Let’s get to work, cutter.

A big part of knowing what to cut comes from scanning. Floating over to the hulking space freighter you can do a basic scan, seeing a few cut points, but since you can’t cut into the skin of the craft, you’ll need a little more effort to get started. Cutting into the glass cockpit is going to cause explosive decompression and the loss of revenue as it’ll all just end up in the furnace, so that’s a non-starter. Instead, you’ll want to head into the ship via the airlock. Heading inside, you’ll then need to find the air regulator to fully decompress the room you are in and any open adjacent ones. Early ships are a single long tube, but later ones are a whole lot more complex, but we’ll get back to them later. With the ship slightly more safe, you can then find the attach points holding the whole thing together, peeling the ship’s exterior like an onion.

Once you’ve gotten the pieces loose, a quick glance at your helmet HUD will tell you where it needs to go. You have three possible destinations for the ship pieces — the barge, the processor, and a furnace. The barge is typically where you’ll throw big ticket items that’ll net you the most cash. Seats, computers, storage lockers, fuel tanks, and electronics are typically worth saving. It’s moving day and you’ve got bills to pay, but just underneath the cushy interior of the ship lies the creamy center that’ll net you the most cash.

With the ship emptied, you’ll likely need to use your cutter to get into the crawl spaces behind the walls. To this end you have two lasers — a pinpoint laser that will heat a small spot until it breaks apart, and a splitsaw that will cut across a vertical or horizontal line, not unlike the cutter Engineer Isaac Clarke wields in the Dead Space games. While you won’t find any necromorphs in said crawl spaces, what is in there is just as likely to kill you, and it’ll hurt the entire time.

The first few ships have very simple layouts. The manufacturer has typically located a single engine in the rear of the ship, hooked to a single fuel canister without any sort of complex plumbing. The reactor (by far the most expensive piece of the ship, and a high priority to recover) turns into a ticking time bomb the second you dislodge it from its casing, so you’ll want to clear a path from the ship to the barge, but otherwise it’s a fairly easy deal as you can see in the video above. Zipping away the outer layer reveals more structural cut points, letting the whole ship peel apart fairly easily. Pulling out the fuel tanks carefully is likely the most dangerous part of the entire thing on a starter ship. But let’s be honest — starter ships are for rookies. The real money is in the more dangerous endeavors.

The Lynx Corporation, your employer, is happy to supply you with everything you need to stay alive long enough to harvest the best parts of a ship, including a batch of clones should you find yourself on the other side of a mishap. They’ll naturally charge you a steep fee for all of your rental gear, as well as your replacement body, but they are nice enough to simply add it to the billion dollar loan you already have (and are “kind” enough to charge you interest, daily), letting you get right back to work. How kind.

Each shift in Hardspace: Shipbreaker is 15 minutes. Your starter O2 tanks hold about half that, so you’ll need to head back to the Hab unit, or scrounge some from the ship itself just to get through your day. You can count on Lynx to charge you for that O2 refill, by the way. That’s where the primary challenge comes in.

Hardspace: Shipbreaker takes place in space, and that means granting the player 360 degrees of movement. Like Homeworld, this pushes you to think about the play space differently, and it’s very easy to lose track of which way is up or down. I’m instantly reminded of The Expanses of Ender’s Game, and that’s high praise indeed. Using a controller is highly recommended as you’ll be making a ton of maneuvers as you work through the ins and outs of working in zero-g, though it is possible to play with a mouse and keyboard. Like the real thing, you’ll use thrusters to maneuver, and inertia is a real thing. Get moving too quickly (maybe by using your grapple gun to slingshot you) and it’ll be hard to stop. Hitting a solid object in space is a bad time, and you’ll likely be racking up those hefty Lynx resurrection clone fees if your crash is bad enough. It takes a bit of practice, but when you get the hang of it, it’s incredibly satisfying, and ultimately more profitable as you get more done with less flailing around.

After just 15 minutes, your shift will end. The company will tally up everything you’ve sorted and pay down your debt. That sounds reasonable enough, but they will also hit you for rent for your Hab unit, your helmet, grapple gun, cutter, dock rental fees, and every other thing they could possibly charge for — it’s worse than a visit to a bank. The company expects that you’ll salvage as much as possible from each ship, but you’ll have to weigh whether another expensive space walk is worth the money. Anything you leave in space becomes the property of Lynx, and they will fine you for leaving expensive pieces like engines behind, so choose wisely.

As you get the hang of cutting up ships, you’ll be given opportunities for advancement. Completing specific objectives gets you a proprietary credit that you can use for upgrades to your equipment, making you more efficient at your job. Maybe it’s a cutter that doesn’t overheat as much, or larger O2 tanks so you don’t have to buy as many refills, but all of it is meant to make you a better cutter. Let’s take a look at what a “hard” ship looks like, alongside a few upgrades.

As you can see, I’ve managed to clear a few million bucks off my interminable debt, and I have a few upgrades that let me fire my grapple gun a little further, and I can even charge it up to push large objects. If you watch that video above to the end, though, it’s easy to see why this is such a dangerous job in the first place.

Shipbreaker is moving into Early Access and I’m already madly and deeply in love with the gameplay loop. I figured I’d play it for a few hours to get my feet wet. It’s so relaxing and freeing that I’ve completely lost track of time, already sinking a full 10 hours into the game. The part I’m enjoying the most is that, other than in the tutorial, there is no set path. Each ship is a puzzle, waiting for you to solve it any way you wish. On some ships I’ll drop the floor first, allowing me to shoot objects directly to the barge at will. Others are better if you can separate out the compartments and rip them apart methodically. Larger ships usually have separate areas surrounded by a complex hull that you’ll have to dissect carefully. All of them have fuel lines that need to be drained and otherwise disarmed so as to not explode when you touch them with a laser. And then there’s the matter of that reactor and its ticking time bomb nature. No matter how you approach your work, it’s equally calming and dangerous, and your decisions are the difference between profits and death.

As the game heads into Early Access, I can think of one angle that could be amazing for future content. Scout ships, civilian transports, and behemoth carriers engaging one another from all angles — space battles are some of the most awesome examples of the power of warfare, but what happens after the shooting stops? One side limps away, the other side gives chase, and what they leave behind is a whole lot of derelict spacecraft. It’d be fantastic if Blackbird Interactive could give us damaged spaceships with armored plating that can’t be scanned, with dangers and decompression hidden behind every corner. It’s on my wish list, and isn’t that what Early Access is about?

I guess it’s pretty clear to see that I’ve got Hardspace: Shipbreaker on my mind a lot these days. I suspect after a few shifts as a blue collar cutter, you will too. You can try it for yourself on Steam Early Access at an introductory price of $19.99, popping up to $24.99 after a limited time. Look for more video on this amazing game as we run up to a release at some point in 2020.