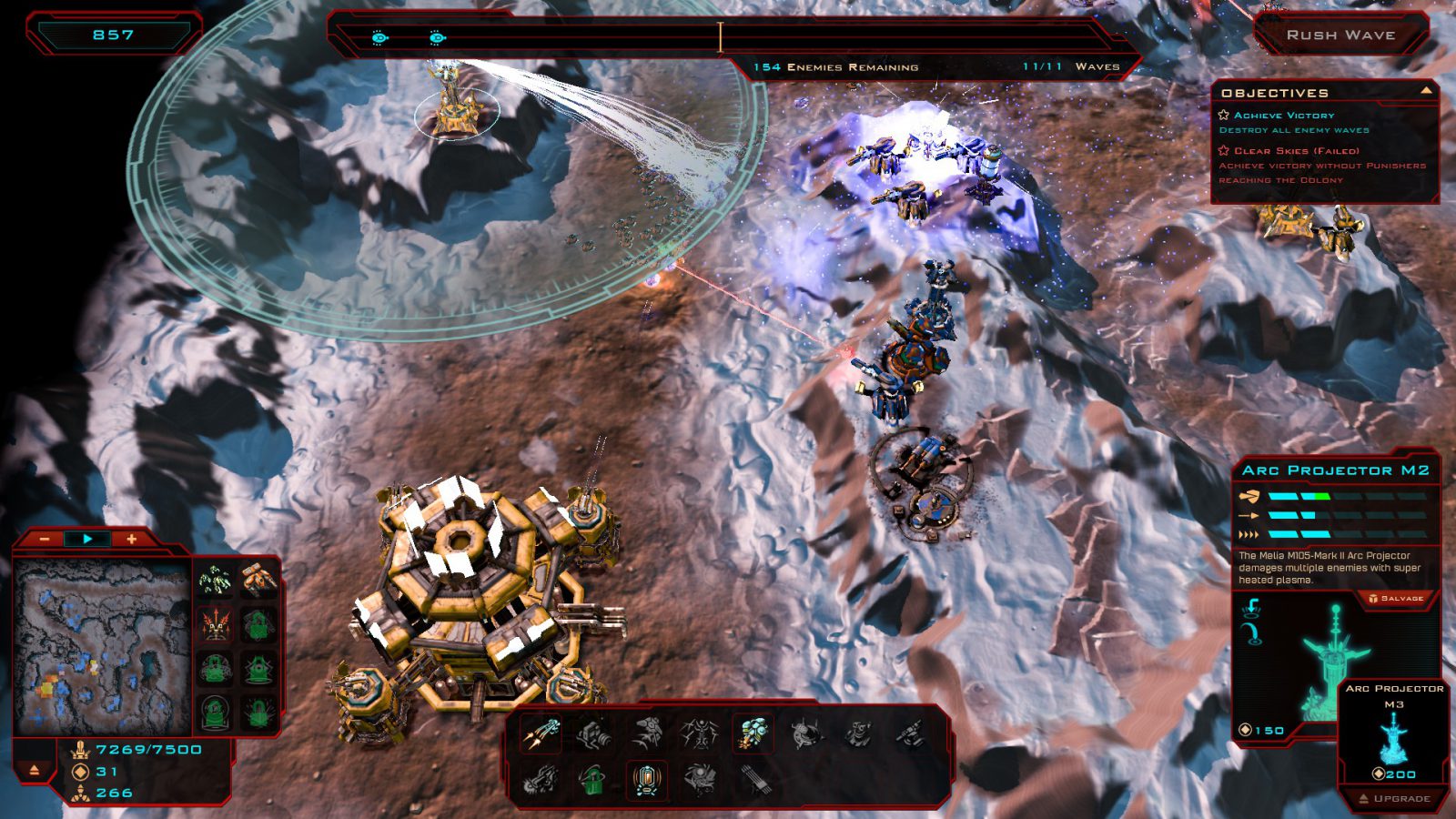 Siege of Centauri feels sort of like an in-between project for Stardock Entertainment, the company behind Galactic Civilizations and Sins of a Solar Empire. It also takes place in the Ashes of the Singularity universe. This build is considered a Beta, so it’s not feature complete and is still trying to find its ultimate identity, but what is currently in the game is a competent tower defense game. 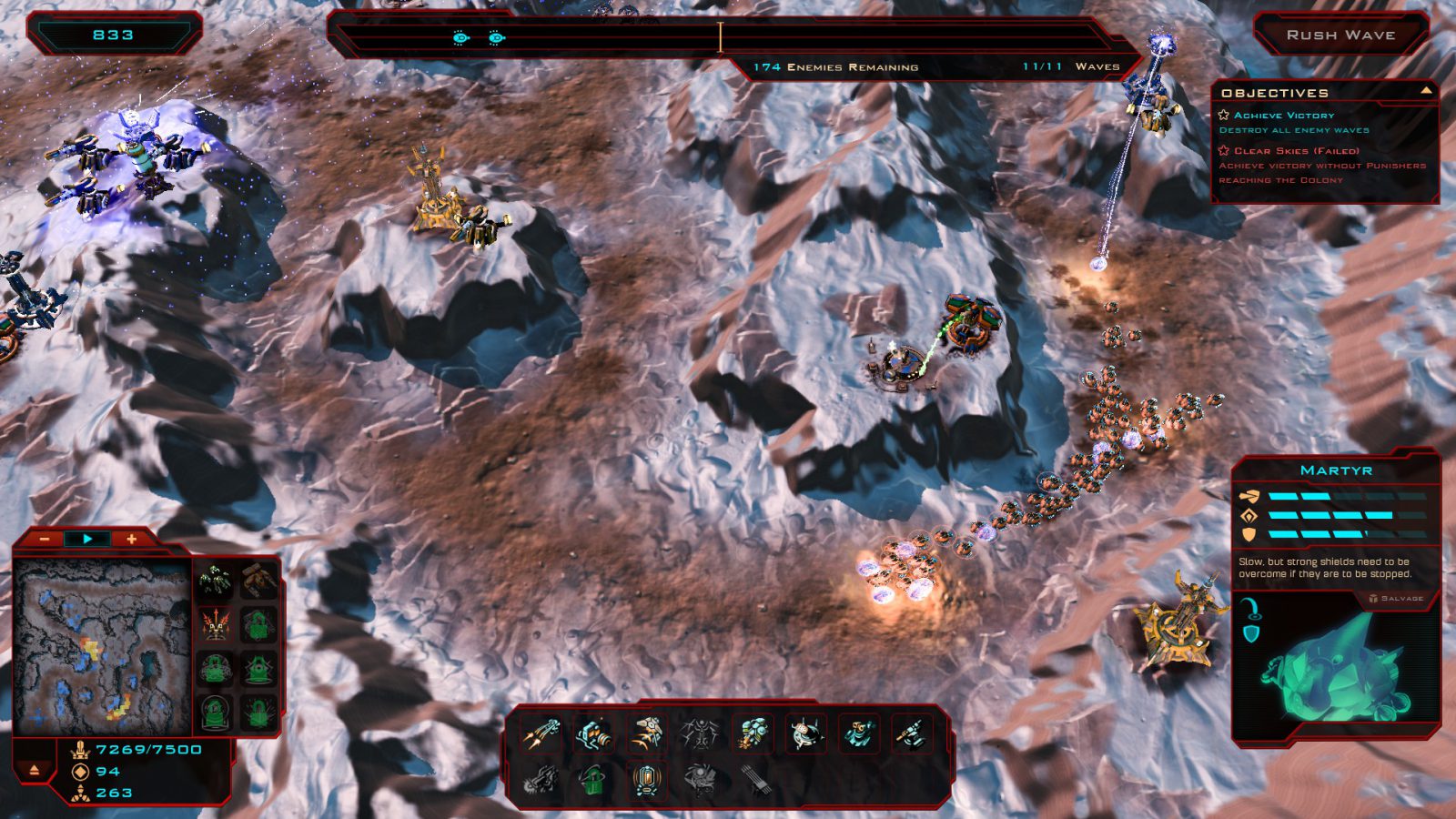 At the moment, only the core gameplay is available for Siege of Centauri, as the ability to customize your loadout will be added at a later date. That being said, the core gameplay is worth checking out. With only a small tutorial at the beginning of the first mission, you’re thrown into the game, tasked with placing turrets to prevent an onslaught of alien attackers from reaching your base. Over time, you unlock more tower and upgrade options, which usually coincides with the introduction of new enemy types. 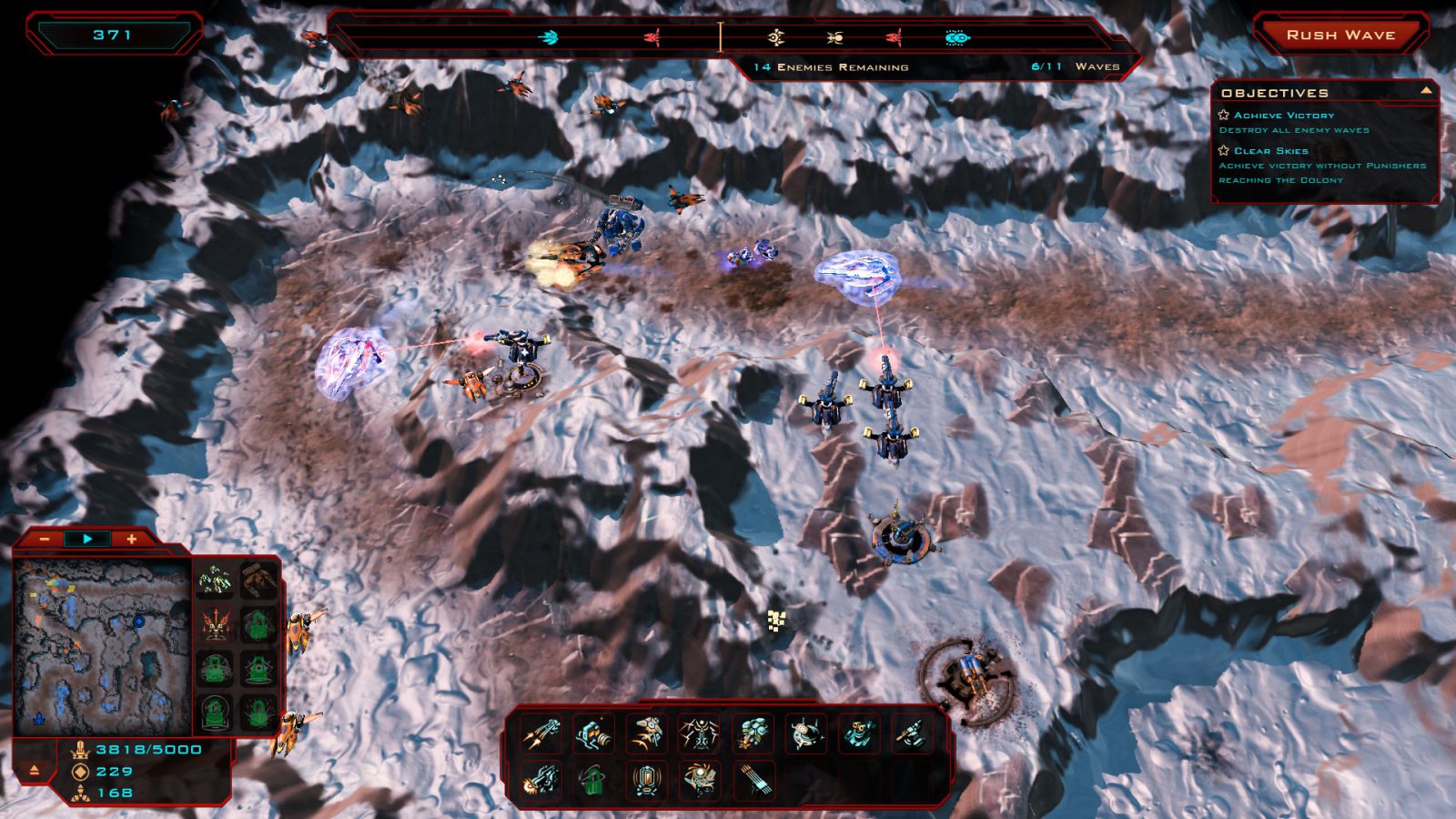 After a few missions, the game started to feel like an intergalactic game of whack-a-mole. Different enemy types were weak against different weapons while they withstand others. While strong, Particle Cannons are useless against the small enemies that come in a large hoard, and that’s when you have to deploy a tower that produces smaller attacks at a large number of enemies. Fortunately, each mission has an overview that tells you what enemies are coming up, and in what order. The directory from the start menu also has a detailed list of strategies against these troops.
There is a sharp difficulty curve though, and some of the enemy forces feel a little unbalanced. The Eradicator’s strategy currently states to use Particle Cannons against it, but their fast-regenerating shields and high health make them a tank that is almost guaranteed to reach your nexus. Fortunately, I had Milton to help me out of a jam. 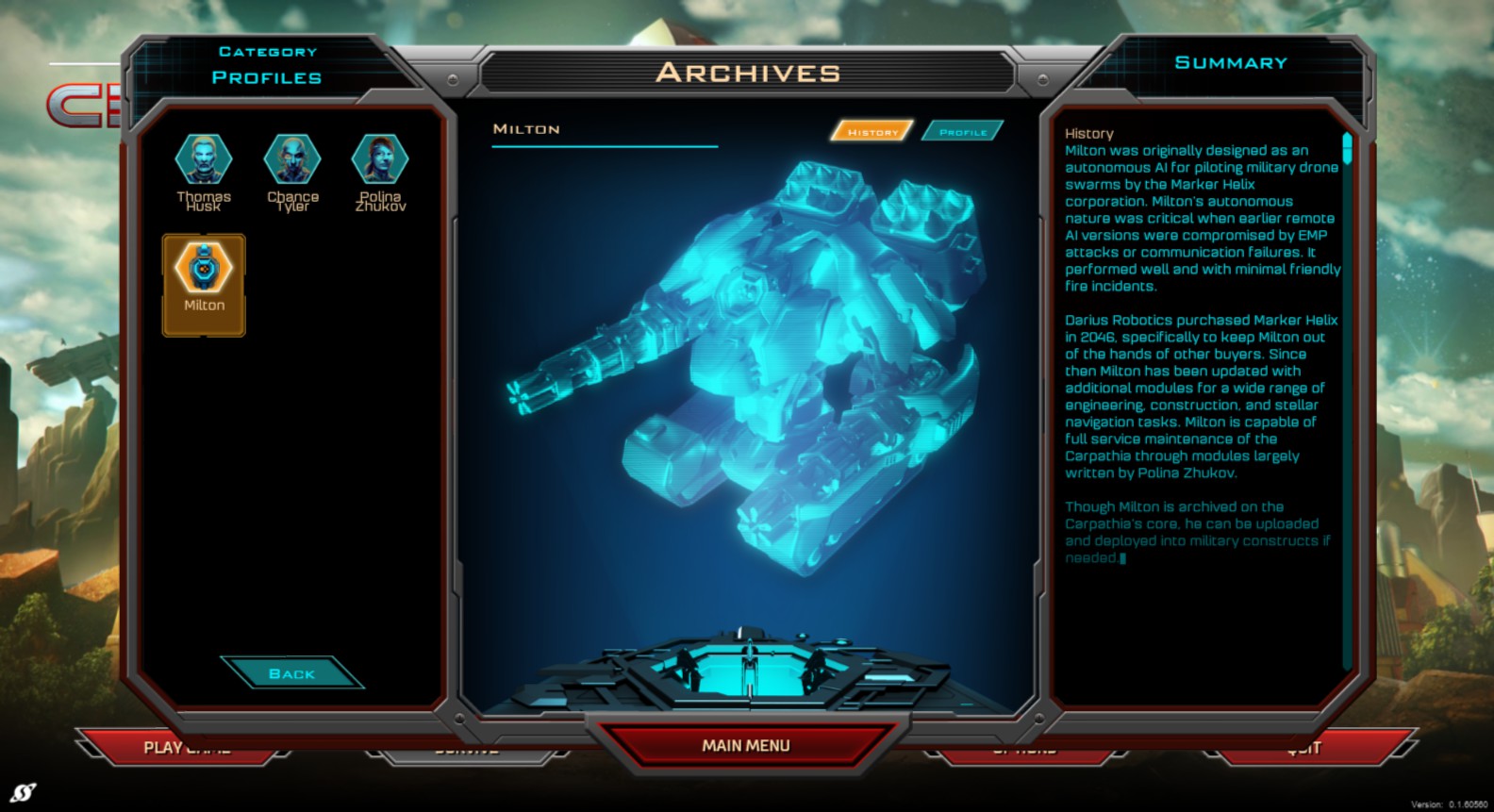 While towers use metal to be deployed, there are special units known as orbitals that can be placed immediately on a path or as an upgrade to the base with Rad. One of these is Milton, a large mech that stops everything in its path for as long as it can. Using this and a gravity channeler, I was able to slow down the Eradicators long enough to take them out. Their difficulty is something I’m expecting to be tweaked as the game is further along in development.

One of the last enemy types introduced with the current set of missions are flying enemies. These ignore the paths completely and can fly to the base immediately. However, they still have to search for it, and hitting ALT will show you their projected flight path, letting you use weapons that target flying enemies in their path like you would normal enemies. Compared to the Eradicator, these bogeys weren’t nearly as difficult to figure out, but I’m sure that’ll change further along. 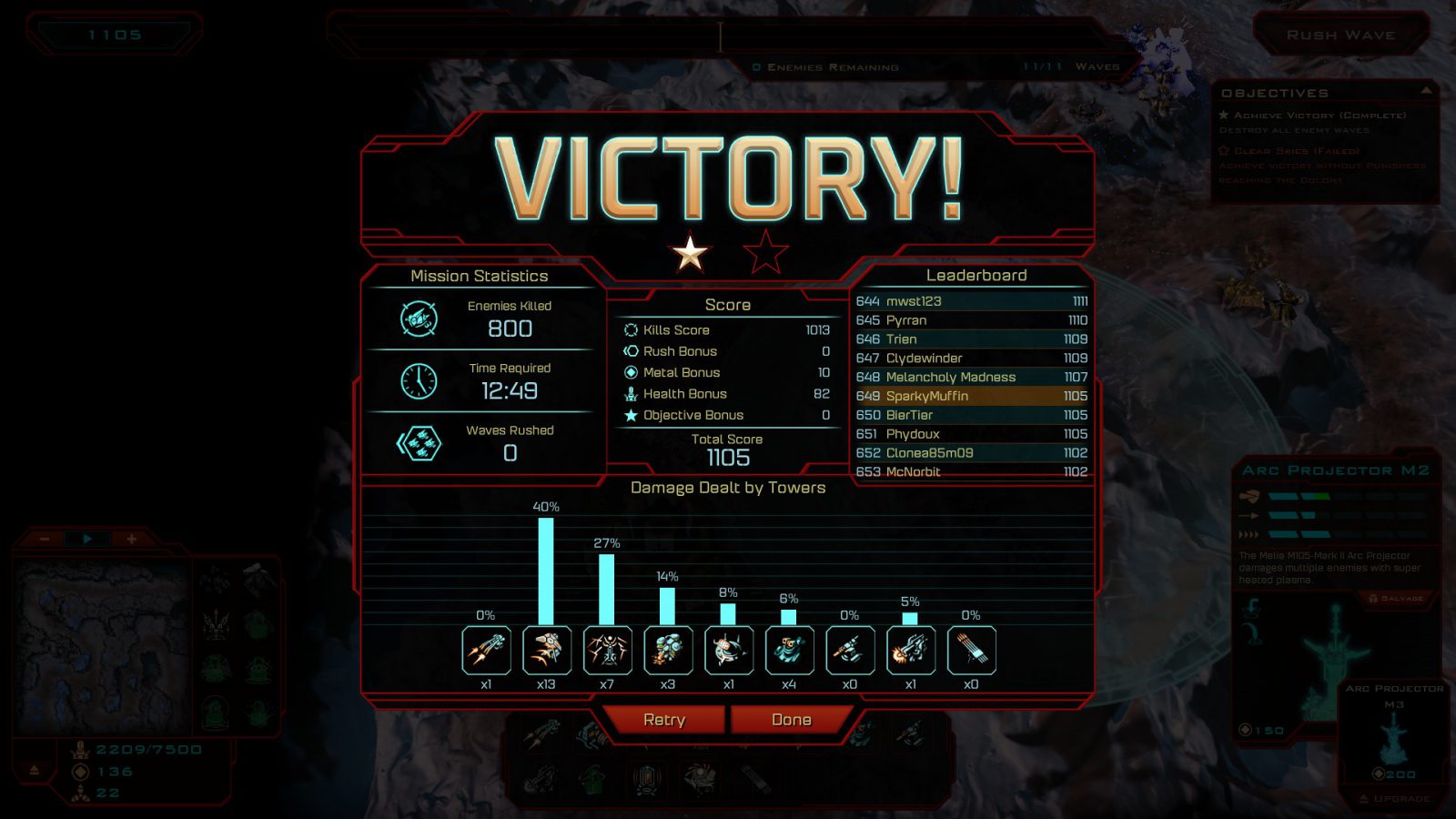 Each mission comes with different difficulties that multiply the score. As each mission also has a leaderboard, players that complete the highest difficulty will come out on top, as this has the largest damage difference and score against enemy units. This feature will be even more interesting when endless mode is released later on, which will challenges players to see how long they can survive against an unlimited number of waves. In addition, each mission has an additional challenge such as preventing a certain enemy type from reaching the colony or rushing waves. While several of these come naturally, others prove to be more challenging, giving the mission more replayability.

There is one change I hope to see in future updates, and that’s an indicator on where the first wave is coming from. Some missions have multiple paths that enemy units can come from, but the only way to tell which path will be used first is by playing the mission multiple times. This often leads me to placing turrets in places that wouldn’t be touched for a while. 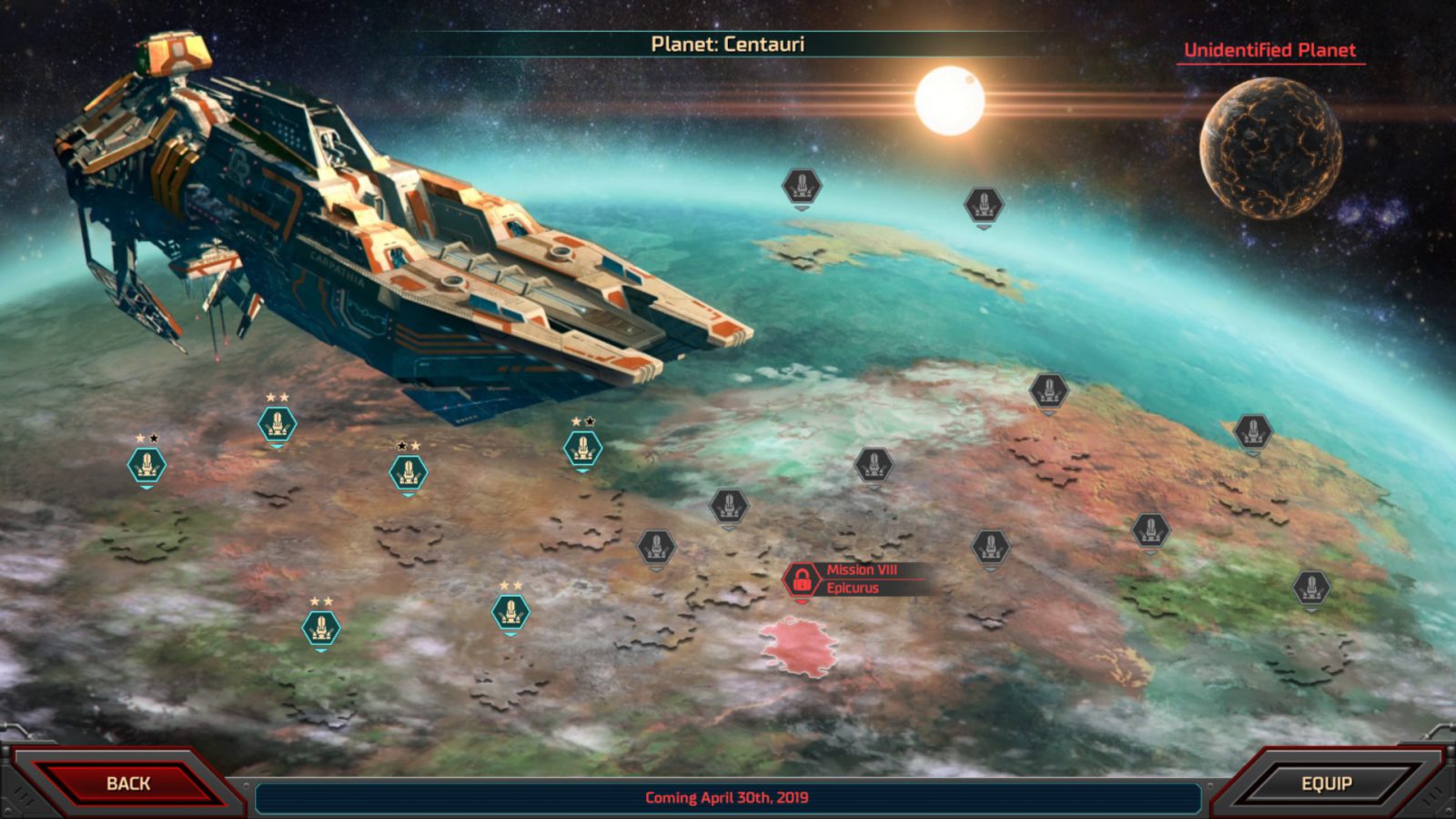 Siege of Centauri shows promise so far for anyone that’s looking for an affordable non-nonsense tower defense game. At the moment, it feels very raw, but Stardock is transparent with what their intentions are with the Early Access platform and the upcoming content. Several missions already have dates on them, incentivizing early adopters to come back often and get a taste of what’s changed. This game is currently in a beta stage, but for the road they have planned to pave, there is hope for a decent destination.