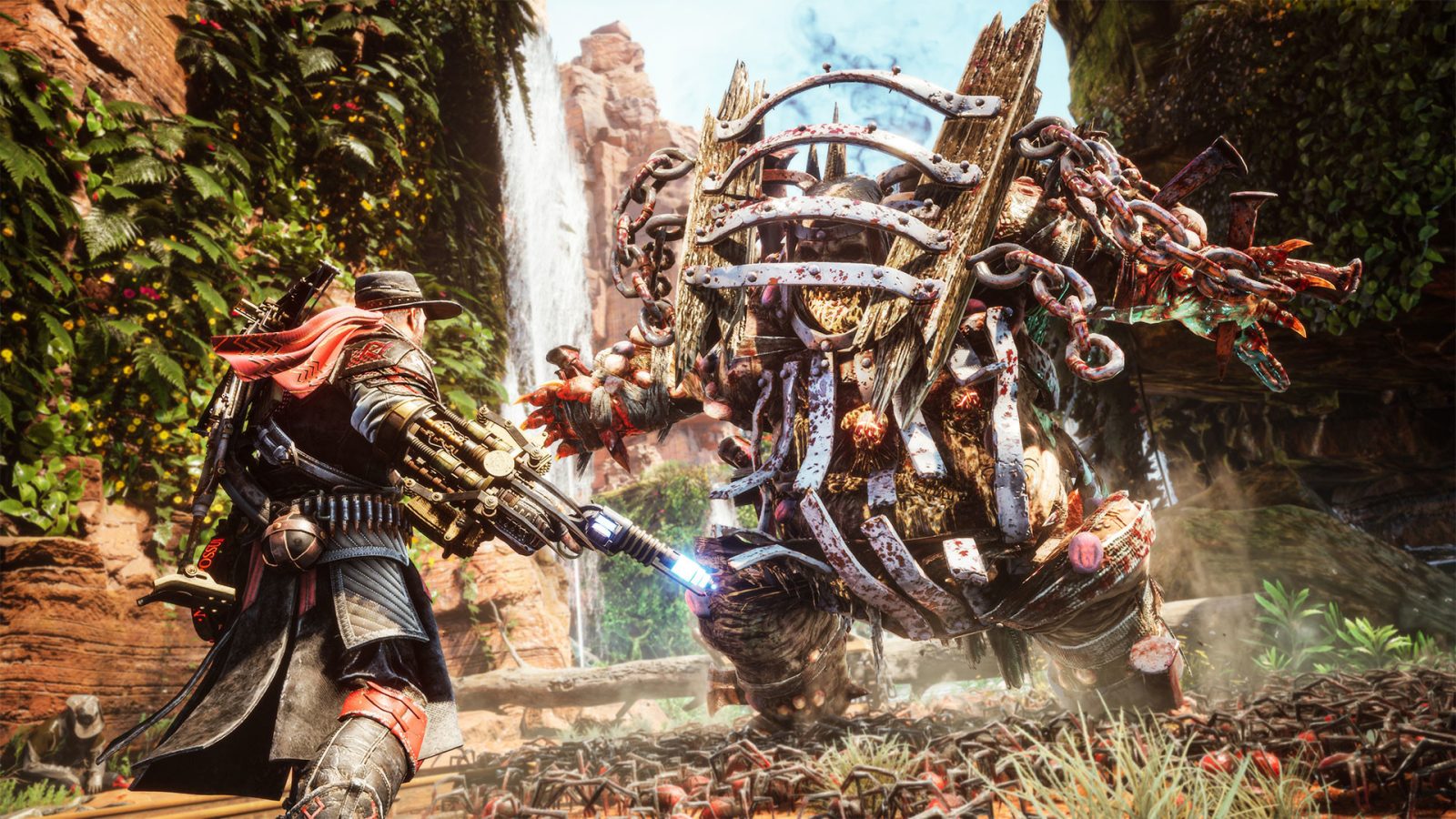 I’ve been enamored with Evil West since the first time I laid eyes on it. It always looks so shiny, so arcadey, so fun. As someone who is all about the Gears Of War stylings in gameplay, especially a fun third person single player game, this looks right up my alley. After playing one of the missions in a preview session, I’m happy to say it is, and I’ll be counting down the days until it releases on November 22nd.

One thing that you might gather from the trailers: there are no chest high walls to hide behind in Evil West, something that many third person shooters throw in their games. Every area you’ll fight enemies in results in a brawl – a fun and morbid dance ending in death, sometimes even your own. This is what makes the game so awesome though, with a lot of dodging and figuring out how to utilize the weapons you have to cause the most mayhem.

Fighting through these hordes is epic fun, it’s the power fantasy we’ve been looking forward to on full display every time you get to take them on. I spent my first bit of time using the rifle, which packs a punch, but that alone isn’t going to win fights for you. Funny enough, slugging these weird looking vampire creatures in the face is encouraged, and you’ll be doing lots of it. I found myself switching between most of the different tools at your disposal, using the rifle on the baddies hanging back at a distance throwing little bomb creatures at you, turning and punching a close-up guy in the nose, and then using a shotgun blast to cut apart the third. The sound design is fantastic as well, with the impact you’d expect to get from both weapon and melee attacks alike.

The ballet of death is the core experience the game pushes your way, and it works tremendously. I keep using the word fun because that’s exactly what I’m getting out of the experience. Part of the reason I used to enjoy playing Gears Of War was simply because it was so fun to rip a Locust apart with a chainsaw attached to my gun. It feels like I’m recapturing that feeling almost every second of playing Evil West, and if they can extend that over an entire game, count me in. I love how over the top it all feels, with blood and guts everywhere as you slash through all the weird creatures Flying Wild Hog has come up with. 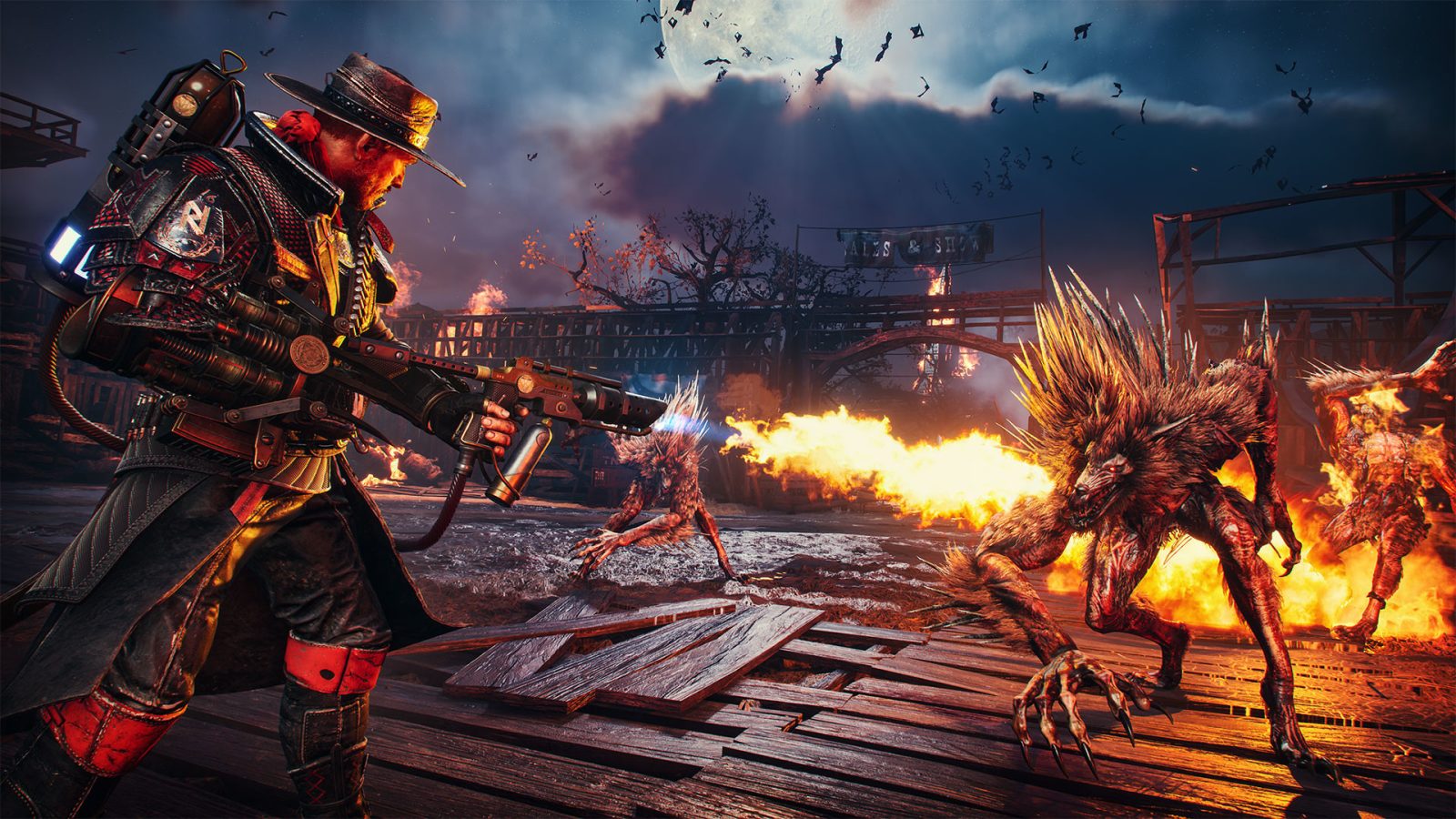 The setting is also a trip, with it seeming like a mesh of Van Helsing meets Wild Wild West (yes, the infamous Will Smith movie). The steampunk flair fits everything wonderfully, giving Evil West a unique take in an industry where everything seems like it’s been done a million times over. There wasn’t a lot in terms of story in the level I got to play, so I’m really excited to see what the point of all of this is beyond just destroying vampires, even if that alone is a neat premise.

I’m also really liking the perks and upgrades in play I’ve seen through my preview. Some of it is as simple as a pick-up radius, but others are really cool. The “Bait & Switch” perk, for instance, allows you to dodge without missing a beat, keeping your melee combo and even increasing the area of effect damage of the next punch. Creative things like this add to what’s already a loaded arsenal, and it’ll keep the gameplay interesting for a good while.

I ran into something else that was neat while wandering off the beaten path. There are little side areas as you make your way through the level, but this one in particular put me in a cave where a bunch of enemies started spawning, finishing with a mini-boss. As soon as I tore said mini-boss to shreds, I found a reward waiting around a corner in a valuable chest. I’m fine with exploring and finding some extra cash for leveling up and whatnot, but I really hope there’s a lot more of these kinds of “side quests” to find as you progress in Evil West. 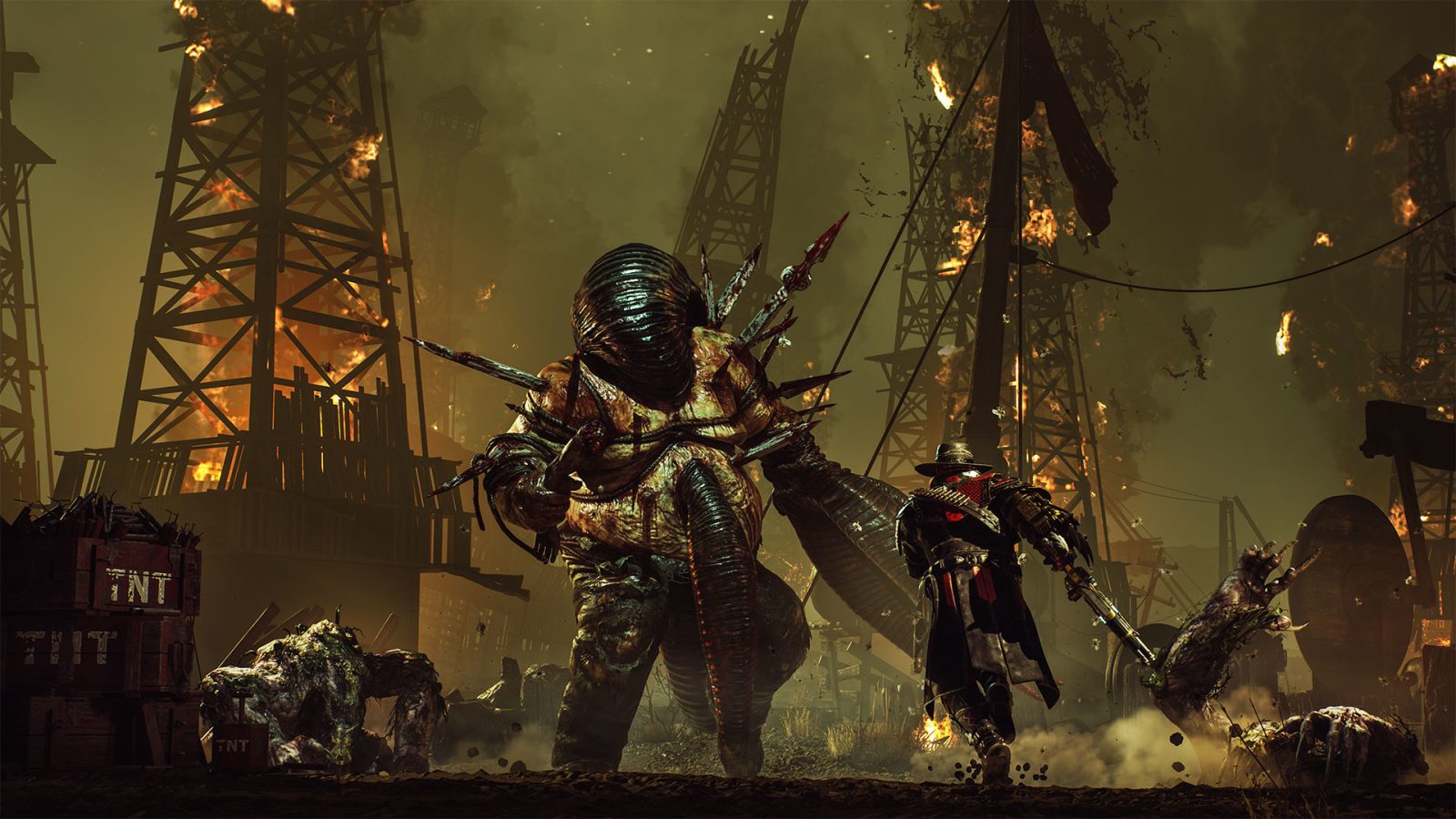 Sadly, the demo only lasted about an hour, but as you can tell, I’m more than ready to take on the vampiric hordes again. Evil West launches November 22nd, for PlayStation 5, PlayStation 4, Xbox Series X/S, Xbox One, and PC. If the taste I got of Evil West is what I can expect throughout the whole game, go ahead and sign me up for the agency and give me a wooden stake. It’s murdering the Morbin’ time.