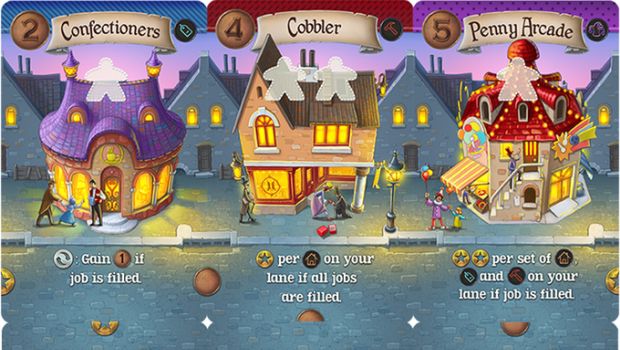 Worker placement games can be tricky.  Many have a problem with the player going first having a huge advantage. Other one can feel like it plays too similarly play after play.  Gamers may also be asking themselves how many worker placement games about farming are really needed.  Penny Lane has a unique theme of building a road with businesses on them.  To find out more about Penny Lane, currently funding on Kickstarter, I got the opportunity to ask Mel Primus, one of the designers, about the game and how this theme came into play.

You created Mint Works, which fit in a small tin making for a tiny footprint. How much bigger is the scope of Penny Lane?

For Penny Lane, the constraint on size was less severe. Although Sparkworks still wanted a small box game, we had the freedom to expand upon the mechanisms from Mint Works. While Justin was working on the finishing touches of Mint Delivery, I began work on what would become Penny Lane. I wanted to keep Justin’s original concept where your “workers” are spent like currency, while at the same time thematically bringing the workers back into our worker placement game. Like Mint Works, in Penny Lane players will be drafting their actions in a worker placement style of play using their pennies. Certain buildings purchased will provide citizens—your workers—that can then be placed into jobs for various effects.

The only other game I can think of with a theme of building a road is Via Appia. What made you move forward with this theme?

This part came much later in the development of Penny Lane while working with Dann May, the creative director at Sparkworks. Visually, he wanted to present each player’s growing collection of building cards as a row of structures along a street. After Dann showed us a mockup of what he was thinking, I was inspired to build additional mechanisms into the game to take advantage of this visual presentation. This lead to the development of the starting player board and the bonus links on the building cards.

What’s the difference between the Main Street cards and the Building cards?

The Building cards are obtained by players through two of the Main Street cards, either purchased from a market of five available selections using the Masons’ Guild or randomly from the top of the deck with the Black Market, if you’re feeling lucky. Once gained, they are added to the player’s individual Lane and will provide them citizens, extra income, victory points, or unique special abilities. Where these building are placed on your Lane can be important. Completing bonus links can earn extra income and victory points, and buildings such as the Haunted House reward you for having no citizens on adjacent cards. Nobody wants to live or work next to that scary place, right?!

What kinds of buildings will be available in the game?

There are four types of buildings in Penny Lane: Housing, Stores, Workshops and Attractions.

How do you choose which buildings you can get for your avenue?

Using either the Mason’s Guild or the Black Market. Which ones you choose to purchase will depend greatly on your current tactics and overall strategy. You might go for one because of its special ability, extra income, or card type; or because it has the best arrangement of bonus links to match up to those already in your lane; or maybe just to prevent another player from getting it. If you’re using the Black Market, however, you don’t get much of a choice on what you get, unless you go down that shady Dark Alley.

What’s the advantage of workers on a building?

A majority of the special abilities, upkeep effects and victory points do not take effect until you move citizens into the open job slots on those building cards. The Cafe can’t make you any money if there’s no one working there. In addition, each citizen on one of your Housing cards that you find a job for will be worth an additional victory point.

Will the Deluxe Edition be available after the Kickstarter is over?

The Deluxe Edition will only be available directly from Sparkworks after the Kickstarter.

How many reports of broken teeth did you get of people trying to bite into the mints from Mint Works?

We’ve had a lot of people tell us at conventions that the wooden mints look good enough to eat, but no one has ever admitted to trying.

Penny Lane sounds like it has a lot of strategy in a small box, and the colorful buildings have a cheerful aesthetic to them.  Be sure to check out the Kickstarter page now, especially if you want to get the Deluxe Edition.