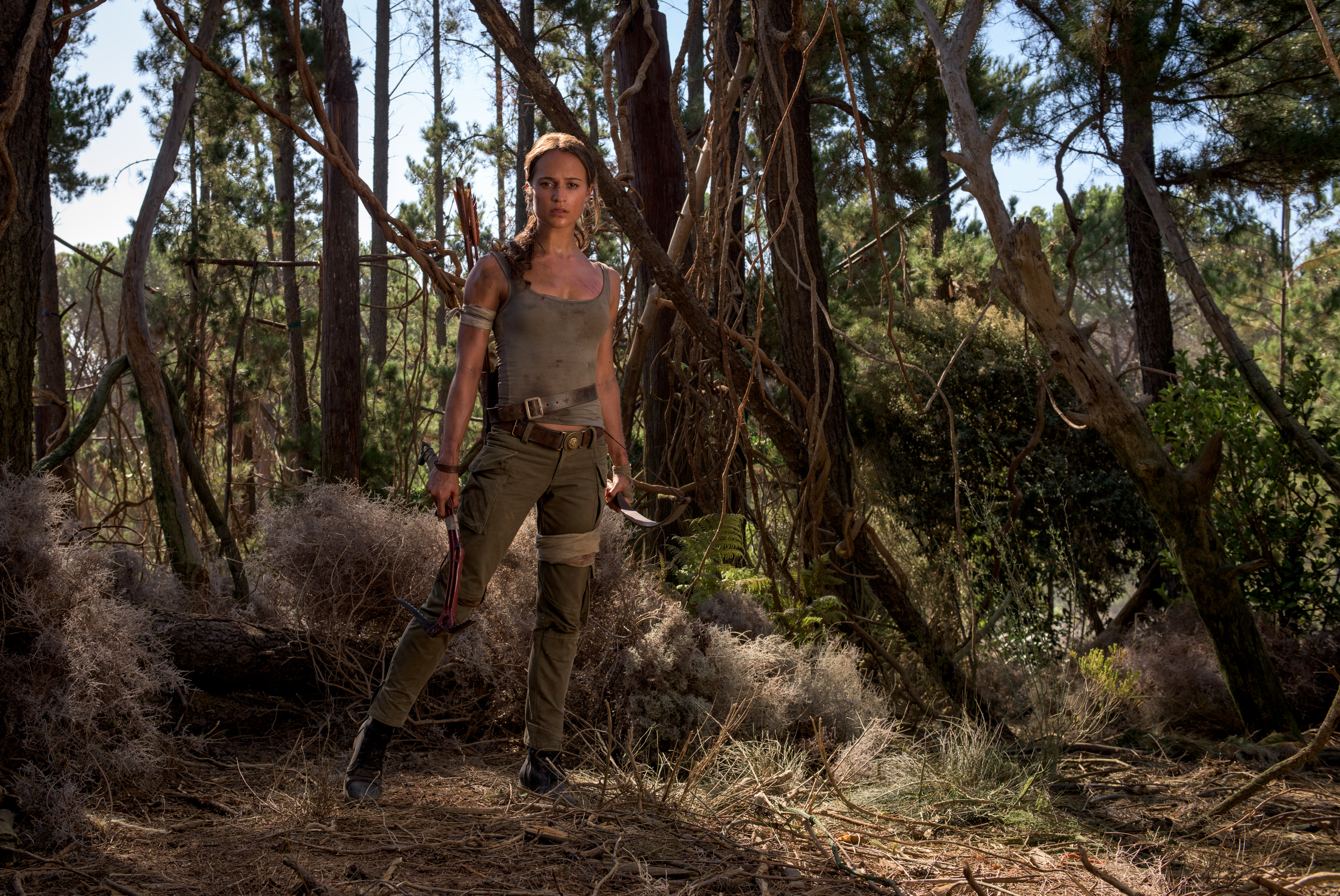 Tomb Raider has a lot riding on it.

Traditional film reviewers will praise or condemn it by elements like character development and pacing. Games critics will debate whether or not this is a game-to-film adaptation done justice. Tomb Raider fans will (assuredly) judge it by how much it pays homage to the rebooted game series the movie takes inspiration from. And, most notably, the public (that’s you!) will formulate an opinion based on the Angelina Jolie-led film series from the early 2000s.

Tomb Raider isn’t a perfect movie, and at times it’s quite unfocused, but the strength of its leading actress pulls it out of the quicksand to make it a passable and pleasant action-adventure flick.

The Old Lara Can’t Come to the Phone Right Now

Alicia Vikander’s (Ex Machina) Lara is immediately distinguishable from Angelina Jolie’s iteration of the character from 2001’s Lara Croft: Tomb Raider. Whereas Jolie’s Lara, while indisputably badass, was the product of the Boys’ Club of late-90s Hollywood — my mom used to make us close our eyes during that shower scene — this new version of the character, brought to life by The Wave director Roar Uthaug, abandons the auction houses and luxury sports bikes. What we’re given instead is a young woman from London’s East Side who spars in boxing rings and struggles to pay the rent. She could be you. She could be me.

She’s still filthy rich (unlike me), but after the death of her mother and the disappearance of her father, Lara’s vacated Croft Manor and refused to accept her sizable inheritance. That is, until she discovers her father’s hidden vault revealing a secret double life that a curious Lara can’t help but investigate.

Lara’s is a coming-of-age story that takes her to Shanghai where she crosses paths with Daniel Wu’s Lu Ren, a ship captain who Lara persuades to ferry her to her father’s last-known location, an island off the Japanese coast called Yamatai. Wu and Vikander have outstanding chemistry when their characters meet, but once the duo set foot on the island, the plot forgets this budding and enjoyable relationship — and, sadly, Lu Ren is left in the dugout. It’s the first sign that Tomb Raider struggles to commit to any of its narrative arcs.

That the transition from Shanghai to Yamatai is so jarring is my most biting critique of Tomb Raider. When Lara reaches the island, the film effectively begins anew as Lara’s character arc takes a dramatic shift and new characters come into the fold. One of those characters is Walton Goggins’ tired and desperate Mathias Vogel who commands a pack of mercenary grunts on his quest to find a tomb buried under the island. We’re told Mathias wants to return to his “family back home”, but save for a few brief mentions of his daughters, we’re never given a reason to really sympathize with him. (In that way, I suppose, Tomb Raider’s version of Mathias parallels the one-dimensional villain of the same name from the 2013 video game.) This isn’t to say Goggins doesn’t play his part deftly. His portrayal is appropriately menacing, and I found his character to be understandably unhinged.

At this point in the movie, Lara is grappling a number of issues: a muddied history with her father, disbelief in the supernatural forces that are rumored to occupy the island, the emotional weight of making her first kill (a scene that left every person in the theater gasping for air), and the desire to liberate Mathias’ enslaved hostages, to name just a few. (Isn’t the list alone exhausting to read?) Each of these issues are exciting to watch unfold, however with one or two exceptions, they’re never explored long enough to satisfy the appetite they create in us.

Fans of Crystal Dynamics’ 2013 reboot of the video game franchise had more than ten hours for the game to address this myriad of interesting plots and relationships — and while each action sequence is exhilarating and every dramatic scene feels weighty, Tomb Raider left me feeling like I’d just watched the CliffsNotes version of the game — a “greatest hits” of its source material. This may not be appealing to fans who played the 2013 game that inspired Tomb Raider, as the film hardly deviates from the game’s plot. And it will be especially unappealing to audiences hoping for a modicum of thematic focus in their action movies.

Tomb Raider strives to be an action flick, a daddy-daughter tale, an origin story, a game-to-film adaptation and a survivor movie all it once. While watching it all unfold is never boring, and admittedly quite fun, the movie lacks the focus that could have elevated it into the echelon of classic blockbuster adventure films.

It’s a testament to Alicia Vikander, really, that even in moments when the plot felt meandering, I could forget about the under-delivering narrative — Vikander’s portrayal of Lara Croft is captivating. Whether she’s cracking a joke, getting the s*** beat out of her or delivering any of the movie’s climactic emotional beats, Vikander is so much fun to watch in almost every scene.

Tomb Raider might have a commitment issue that keeps its plot in disarray, but thanks to its electrifying lead and fun, flashy setpieces, Tomb Raider remains a blast from beginning to end.

Hunter Wolfe just graduated with his B.A. in Communication/Journalism from Shippensburg University and has nearly four years of professional writing experience. His content has been featured on sites like Rolling Stone's Glixel, Destructoid and The Artifice. You can check out his full portfolio at: www.hunterawolfe.com.
Related Articles: Rise of the Tomb Raider, Tomb Raider
Share
Tweet
Share
Submit